The topic of conversation was the landscape shift that conference seen the past two years. Tarleton State moved to Division I, joining the Western Athletic Conference two years ago. Texas A&M-Commerce followed suit joining the Southland Conference this year.

“We’re always looking for opportunities,” Poerner said. “We’re one of the premiere Division II leagues. We’re big, we’re strong and we’re diverse. We’ve had a good relationship with these institutions in the northwest, so it made sense to add these schools. It gave us 10 teams and a 9-game league schedule. We feel this is the best way to keep this great conference successful.”

“It’s just a number,” said West Texas A&M head football coach Hunter Hughes, who is 26-23 entering his sixth season. “We just have to go play and prove to ourselves we can get better. If the coaches and players believe that it will happen. We beat two of the teams in front of us last year, so the rankings don’t really matter.”

Here’s a look at how the voting for the 2022 LSC preseason football poll broke down. 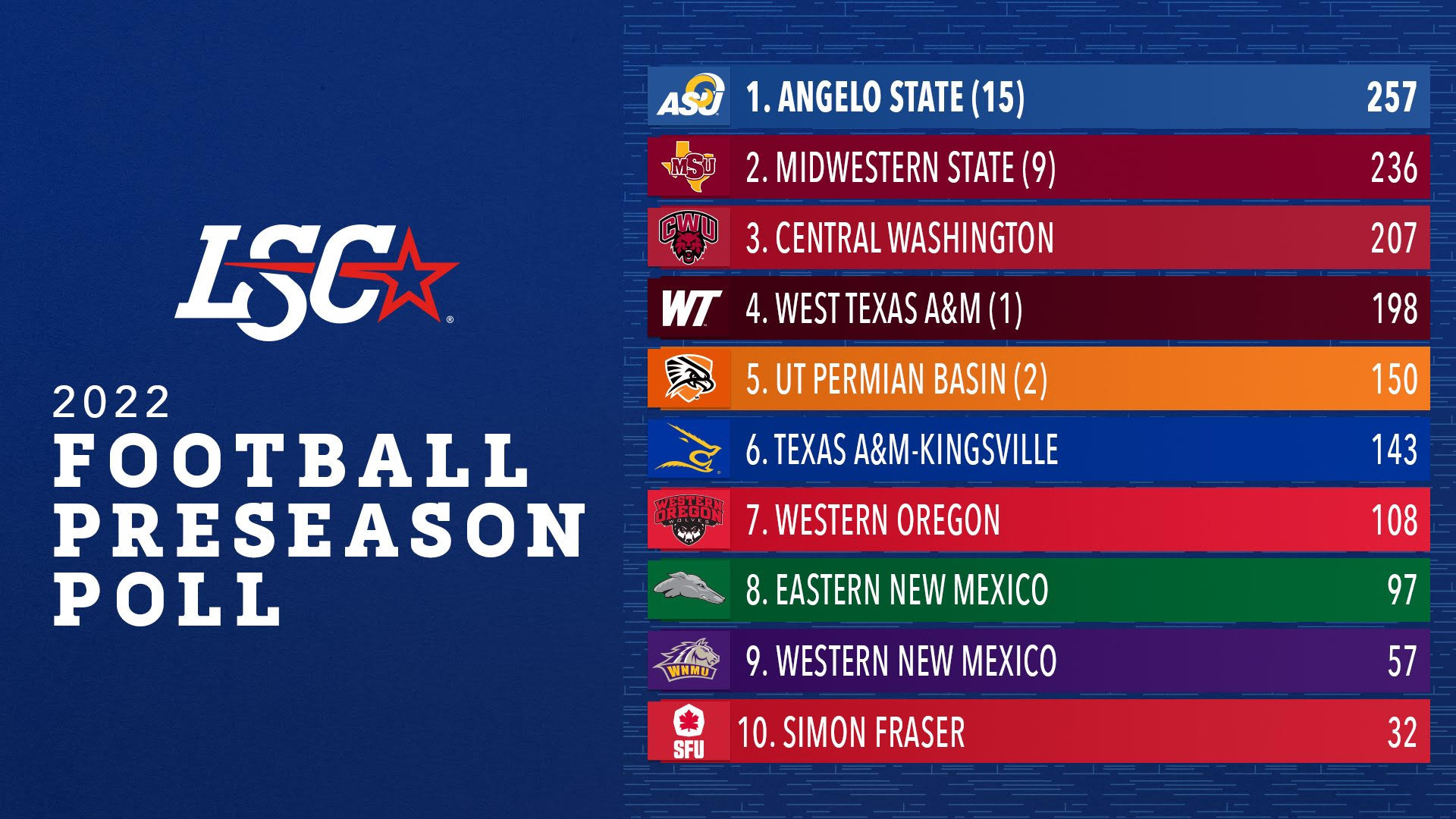 The Buffs went 7-4 overall last season and 5-2 in the LSC but did miss the NCAA Division II playoffs. WT does return a plethora of starters including LSC Preseason Defensive Player of the Year, JT Cavender. The sophomore linebacker had a remarkable freshman campaign racking up 108 tackles, and being named the LSC Linebacker of the Year, as well as Freshman of the year. While Cavender is humbled by the preseason honor, winning games is much more important to the young man.

“I’m speaking for everyone on our football team,” Cavender said. We want to win the conference, and we’re looking forward to competing. We’re just ready to get after it.”

An offensive returner at media day for WT was veteran running back Jarrod Compton. Compton opted to take his super senior season thanks COVID-19. Compton, the son of former WT great J.R. Compton, has been a staple in the Buffs backfield the past four years rushing for 604 yards with four touchdowns in 2021.

“There’s not a lot of places where you get camaraderie like a football locker room,” Compton said. “I feel there is too much left on the table and I’m not big on regrets. I just want to live in the moment and help my team.”

WT opens fall camp on Monday, Aug. 8. The season opener is set for Sept. 3, at home against Western Colorado.

Angelo State running back Nathaniel Omayebu was named the LSC Preseason Offensive Player of the Year. Omayebu rushed for a league-best 1,085 yards last year with 10 touchdowns.

The dean of the LSC, Bill Maskill, returns for his unprecedented 21st season as the head football coach at Midwestern State. Maskill has earned LSC Coach of the Year honors six times over his illustrious career and has the fourth most wins of any Division II head football coach with 150. His 150 wins only trails Texas A&M-Kingsville’s Ron Harms (173) for the most all-time in the LSC.

The voice of West Texas A&M broadcasting Lucas Kinsey was named a 2022 recipient of the Jake Trussell Award for the league’s outstanding broadcaster.

Kinsey’s passion for student-athletes and collegiate athletics is evident in each broadcast as the Beaver, Okla., native and WT alumni serves as the broadcasting voice for volleyball, football, basketball and softball while also spending time in the booth at soccer, baseball and track.