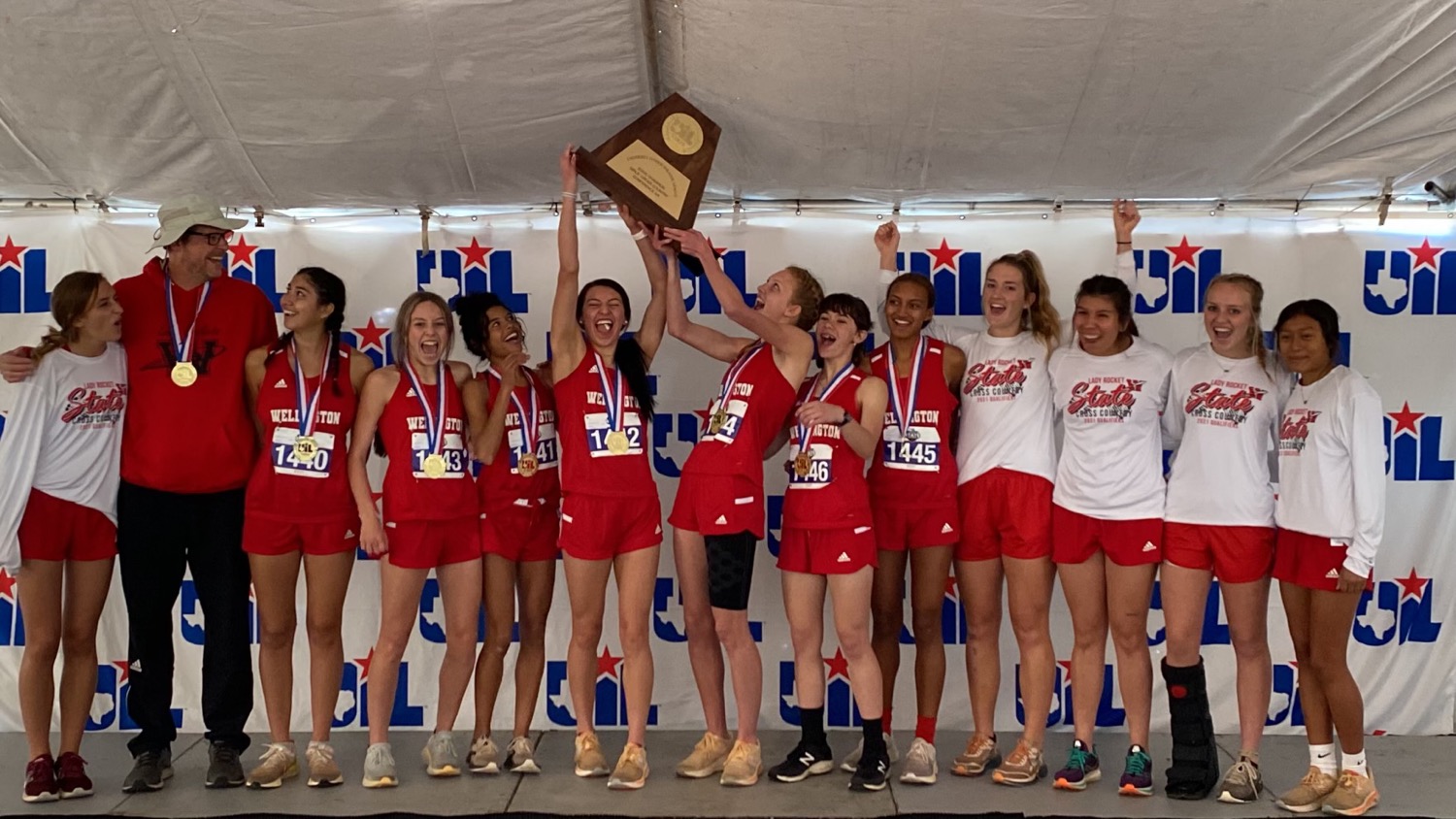 Note: Texas Panhandle teams and individuals are competing at the University Scholastic League cross country championship at Old Settlers Park in Round Rock on Friday and Saturday. Please visit this link below for Friday and Saturday’s full results.

It was a history making day for the Wellington Lady Skyrockets claiming the programs first ever University Interscholastic League Class 2A state championship at Old Settlers Park in Round Rock on Saturday morning.

“It was a surreal day,” Wellington head coach Chris Sumrall said. “We’ve had every emotion you could have. I thought we could win it coming down here, and I knew we had to run really well. What a credit to this team for stepping up this is amazing. This means so much to the community. We had an awesome crowd, and I know everyone back home is loving this right now.”

In what was a dominating day for Region I with the top four teams all coming out of the region, Wellington totaled 78 points to hold off Christoval’s 83 points for a fantastic finish.

Gruver came in third overall to earn bronze as a team with 104 points, and Farwell was fourth with 106 points. 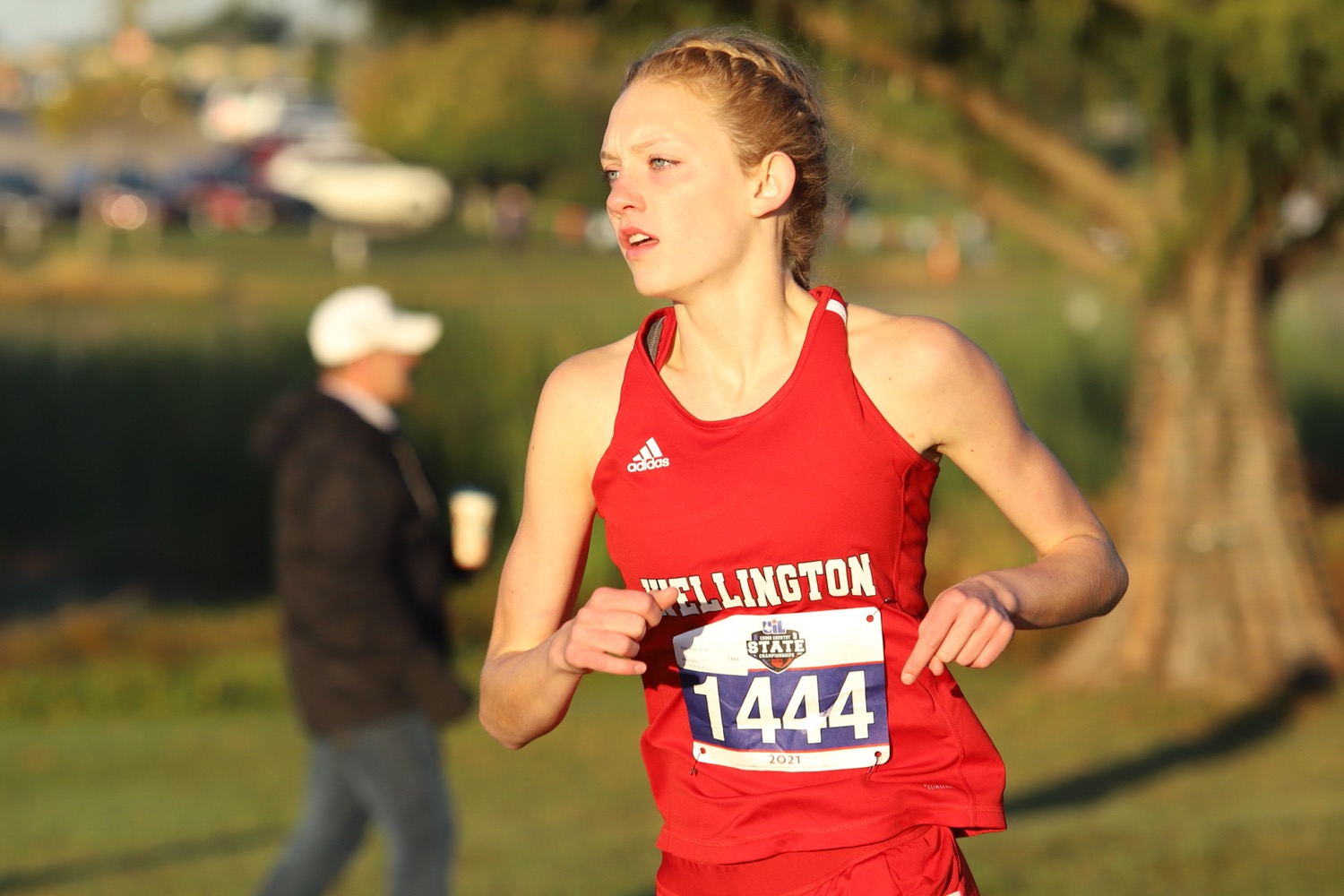 Lady Skyrockets senior standout, Kyla Kane, led the way making history of her own. Kane entered rare air accomplishing what only a handful of other competitors have by capturing her third individual state championship, and her second in as many years. Kane, who was coming off her fourth straight Region I-4A individual title, paced the field with a season-best time of 11:54.6 to get the prestigious win.

“I’m so happy we won it as a team,” Kane said. “That is way more important, but my goal was to win this back-to-back. I won as a freshman, then came up short as a sophomore. So to win two straight, and go out with a bang, and win with my teammates makes this so special.”

“What Kyla did is incredible,” Sumrall said. “It’s almost unhead of. She’s battled through iniuries all year, but to see her win a third is just unbelievable. I’m almost speechless. Kyla means so much to us. She’s a great teammate and a special kid. This is a storybook ending for her cross country career.”

Kane wasn’t the only runner to step up for Wellington. Senior teammate, Hadlee Gomez, ran her best race of the season clocking a 12:48.4 to finish in the top 30 and push the Lady Skyrockets into the top position.

“Hadlee ran great,” Sumrall said. “Being a senior she knew how much this meant. Her contribution was key, and she was terrific.”

“This is so amazing,” Gomez said. “We have a great team, and we knew this could happen. I’m so happy to be a part of this. I just wanted to go out and run my best to help give us our best chance. We made history, and it’s incredible.” 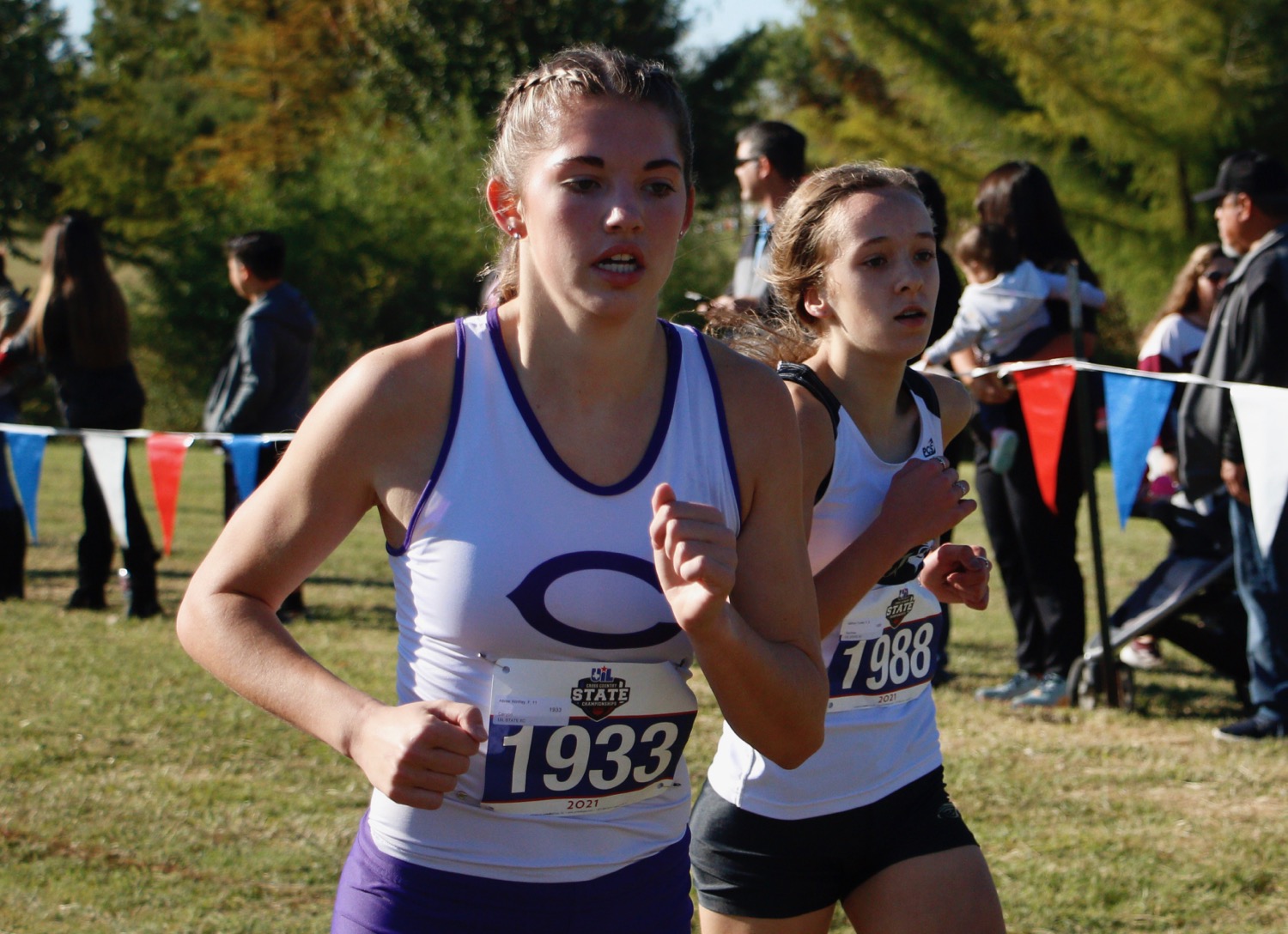 Canyon’s Abree Winfrey, left, races with Kaufman’s Kathryn Tucker in the final stretch of the Class 4A girls state cross country meet Saturday in Round Rock. Winfrey finished fourth as an individual in 11:31. [Anthony Harsch/ For Press Pass Sports]

The Canyon Lady Eagles quest for a fourth straight UIL Class 4A state championship came up short Saturday at Old Settlers Park in Round Rock.

The Lady Eagles placed fourth as a team scoring 162 points. Celina dethroned Canyon as the state champions with 80 points.

On the boys side, Canyon did find the medal stand earning a bronze as a team. The Eagles collected 102 points, as San Elizario won the team title with 92 points.

Canyon sophomore Alex Niemie had a top 10 finish placing eighth individually with a 16:04.3.