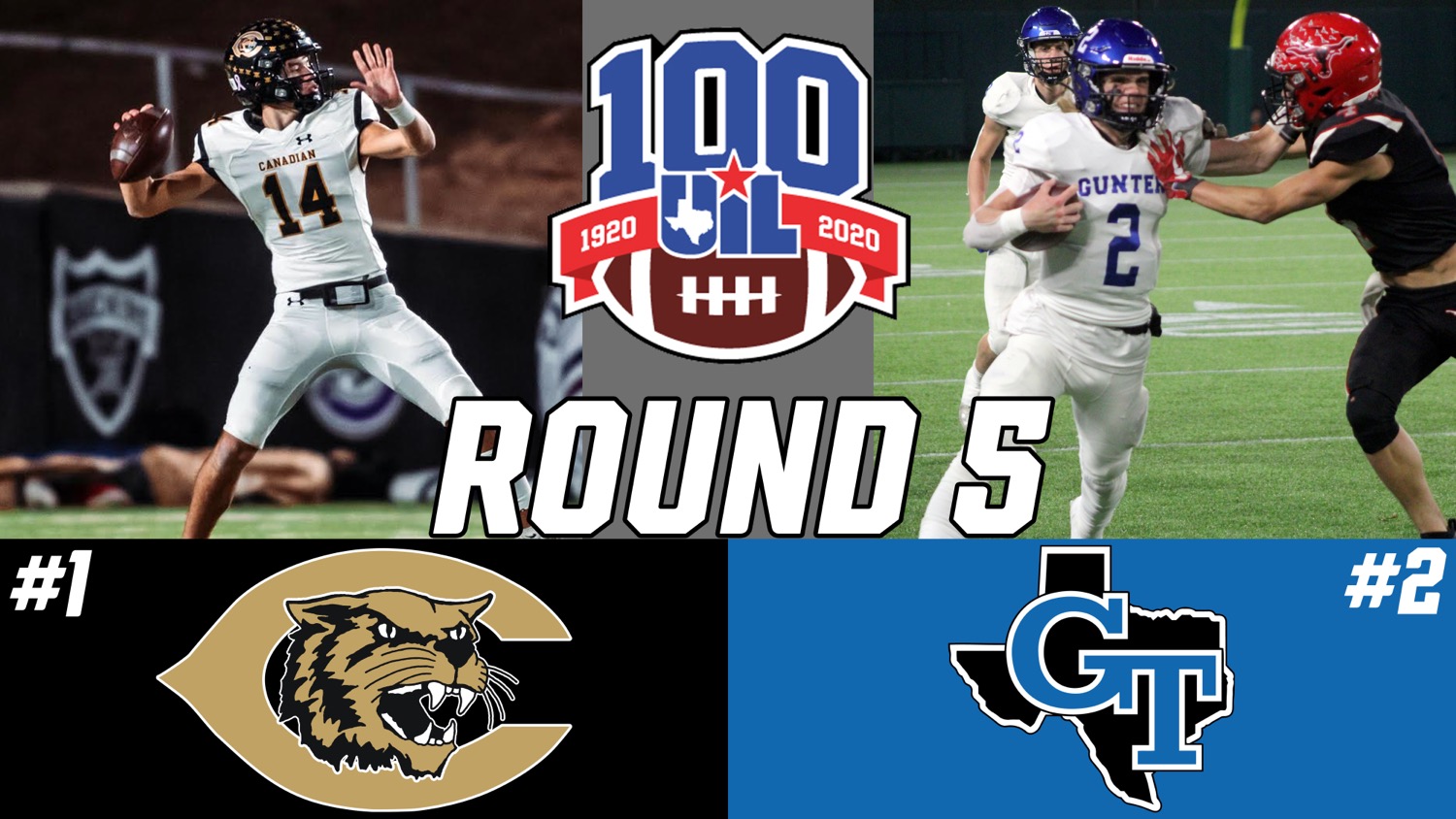 Canadian and Gunter will meet for the fifth straight year in a Class 3A Division II state final at 4 p.m. Friday on Anthony Field at Wildcat Stadium in Abilene. [Graphic by Brent Seals, photos by Trevor Fleeman & Brandon McAullife/ For Press Pass Sports]

Canadian and Gunter, though 338 miles a part, make up one of the most unique rivalries in Texas High School Football.

When the two teams kickoff in the Class 3A Division II state semifinals at 4 p.m. Friday on Anthony Field at Wildcat Stadium in Abilene it will mark the fifth straight semifinal between two of the top blue bloods statewide.

The players may change, the venue may change, but the coaching staffs and the programs stay exactly the same.

“Meeting them for a fifth year in a row, we’re getting to know who they are and they know who we are also,” Gunter coach Jake Fieszel said. “We now assume they are going to be in the semi’s, and if we take care of business in the playoffs Canadian is who we are going to play. It’s become a rivalry, and I say that in a respectful way. We’re excited to compete against the best, we always feel they are the best.”

One of these two powerhouses has been in a UIL state championship game since 2014.

The only true advantage is the Tigers have won three of the four meetings, including a classic last year, 27-20, on the final play of the game.

“Gunter is a great team,” Canadian coach Chris Koetting said. “They are the best coached team we see all year. Their players are very smart. They are very tough, and they just play so hard. I think both teams mirror each other in so many ways.

“Except for one game in these matchups they’ve all been really close, and exciting to watch for fans. But we need to win this time. So we’re going to do everything this week to prepare to get that win.”

Koetting and Fieszel agree there won’t be many secrets in a game of this caliber. Canadian and Gunter know exactly what the other wants to do.

“They basically run three offenses,” Koetting said. “They run the flexbone, then they have a power formation, and then they can throw the ball. There’s so much to get ready for with Gunter.”

“It’s just a deal where they know us and we know them,” Fieszel said. “I don’t mean to pay the past teams a disservice but I think this team is better. Their running back (Hayze Hufstedler) is one we’re real familiar with. He’s having another outstanding year. They have multiple guys to get the ball to, but no doubt Hayze is their bell cow.”

Has started all 14 games this season completing 193-of-276 passes for 3,280 yards with 47 touchdowns to seven interceptions.

The second-year starter has thrown for 1,836 yards with 20 passing touchdowns, adding 661 rushing yards and another 14 TDs.

Has 116 carries on the year rushing for 1,116 yards compiling a total of 16 touchdowns.

Has a made a team-best 86 tackles, 40 of which are solo, with a sack and an interception this year.