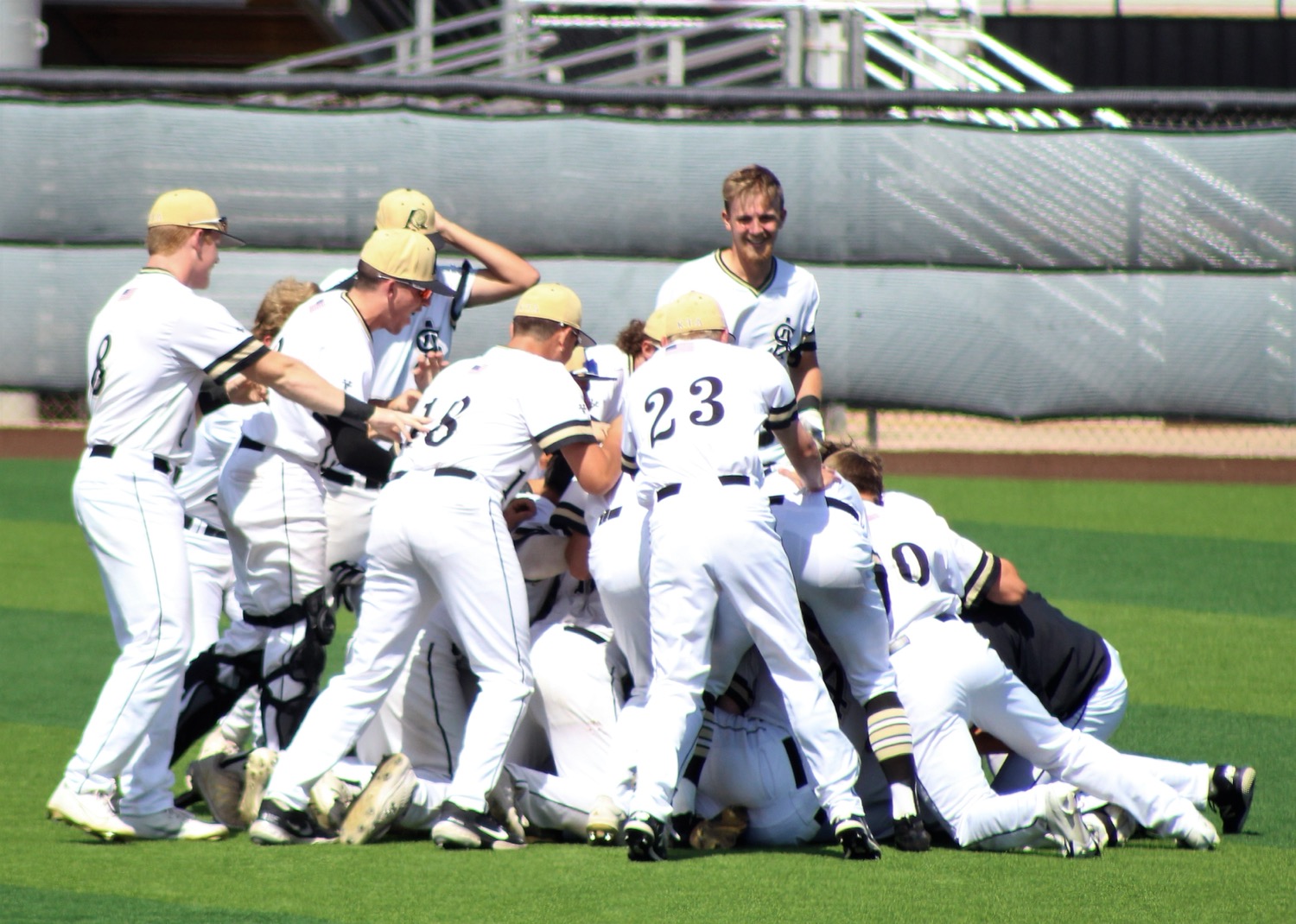 Amarillo High celebrates after earning a 5-4 walk-off win against Birdville to sweep the Hawks in the Class 5A regional semifinals Saturday in Seminole. [Michael Bauer/ For Press Pass Sports]

Trailing by a run heading into the bottom of the seventh, the Sandies showed their resilience by rallying for a thrilling 5-4 walk-off win to down Birdville, earning the two-game sweep of the Hawks in the Class 5A regional semifinals in at Robert Ryan Field.

Game two was originally slated for noon in Lubbock. However, due to due heavy rains Friday night, Lubbock Christian University’s field was unplayable, forcing the move to Seminole for a 2 p.m. start.

This contest was far different from Amarillo High’s 10-4 game one win Friday. Every inning kept fans enthralled in this back and forth matchup.

In the bottom of the seventh, the game was tied at 4-4, the bases loaded, and nobody out. Bryson Slaughter slapped a grounder to third off Birdville reliever Isaac Phelan. Third baseman Hogan Shelby fielded it and made a high throw trying to get the force of a hustling Will Maynard chugging down the line.

Catcher Will Bush caught the ball in plenty of time but due to the throw was pulled off the plate, allowing Maynard to slide in safely for the game-winning run.

“I just wanted to put the ball in play,” Slaughter said. “I tried to turn on the fastball, and luckily good things happened.”

“It was a great job from our guys to gut it out,” Johnson said. “That’s what this team has done all year, so it doesn’t surprise me to see their fight. I’m super excited about it. They continually step up.”

The Sandies (31-8 overall) advance back to the regional finals for the first time since 2018. For third-year head coach, Johnson, it’s his first time to lead a team one series away from the University Interscholastic League state tournament.

“This is big for me,” said Johnson, who has been a head coach 11 years overall with previous stops at Palo Duro and Bushland. “It’s my fourth time to the regional semifinals. Everyone you face is so good when you get to this point. So to have a chance to move on and get to the regional finals is something I cherish.” 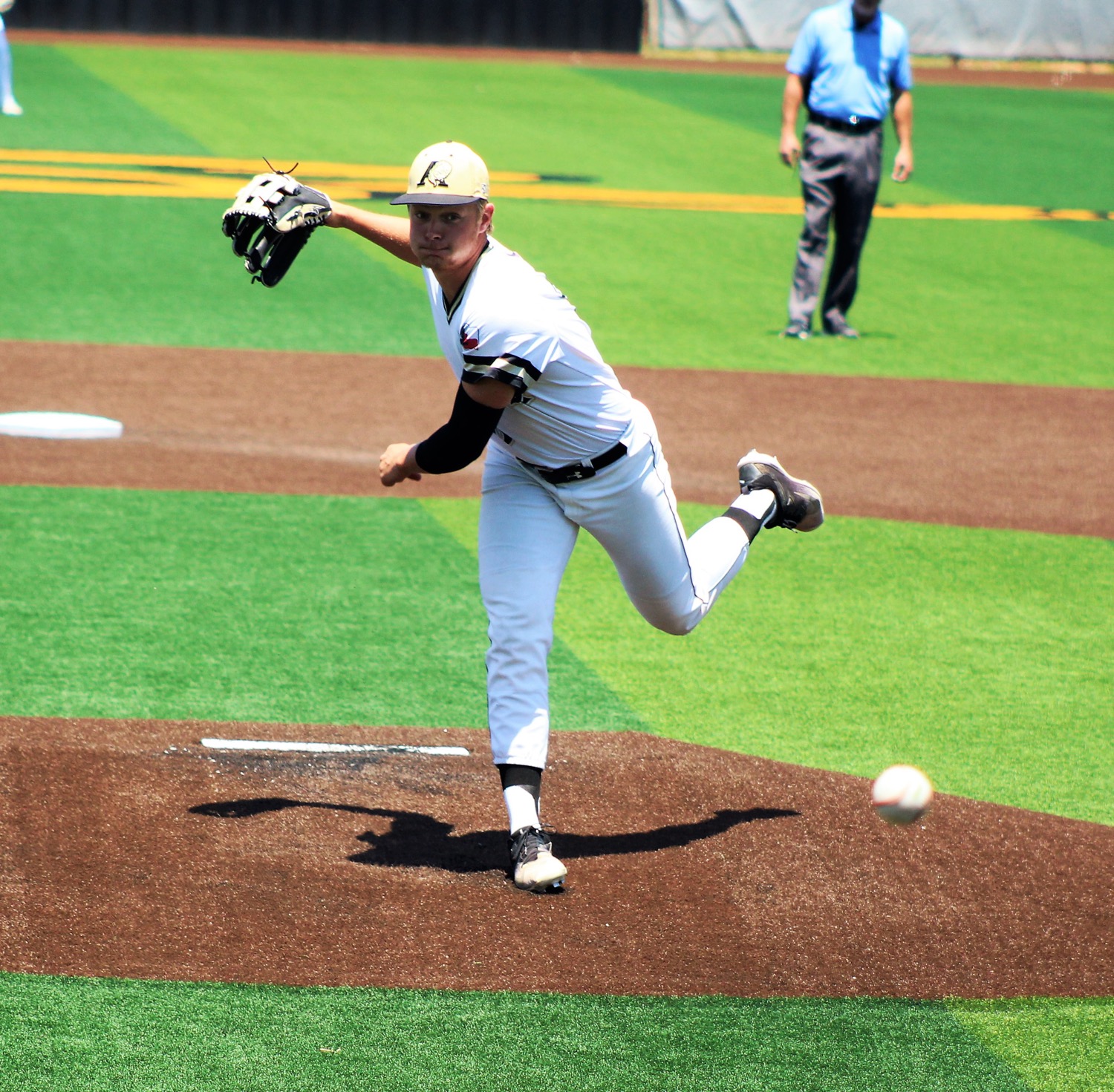 Sandies pitcher Tristan Curless and Birdville pitcher Parker Hutyra did their jobs on the mound. Curless put the AHS on his back working all seven innings, striking out six, including four batters in his final two innings, allowing three earned runs.

Curless was also key at the plate, driving a double to left field, and a triple to left center that led to two runs.

“I wanted to do what I could to win this game,” said Curless, who was 2-for-3 at the plate. “We had a lot of energy, and no one wanted to lose.”

Besides his problems with Curless, Hutyra kept the Sandies lineup off balance with a powerful fastball, and an outstanding slider. Hutyra racked up 11 strikeouts in six innings, but was forced out after the sixth after maxing out at 111 pitches. This forced Birdville to go to the bullpen with Phelan in the seventh clinging to a 4-3 lead.

Phelan got off to a rough start, walking Will Franklin, then allowing a single to Will Maynard. Nathan Haws blooped a shallow single to center immediately giving AHS the bases loaded with no one out.

Jake Maynard then hit into what looked like a double play ball, however, short stop Logan Lacey booted it for an error as Trey Thomas, who was pinch running for Franklin, scored the game-tying run. That led to Slaughter’s heroic effort on the next at-bat

“Every at-bat counted,” Johnson said. “Getting their pitcher out after the sixth inning goes back to great at-bats in the first or third inning. It’s also the idea of if we have an out left we have a chance.”

AHS will now face Aledo (29-9-2) in the regional finals next weekend at a time and place to be determined.”