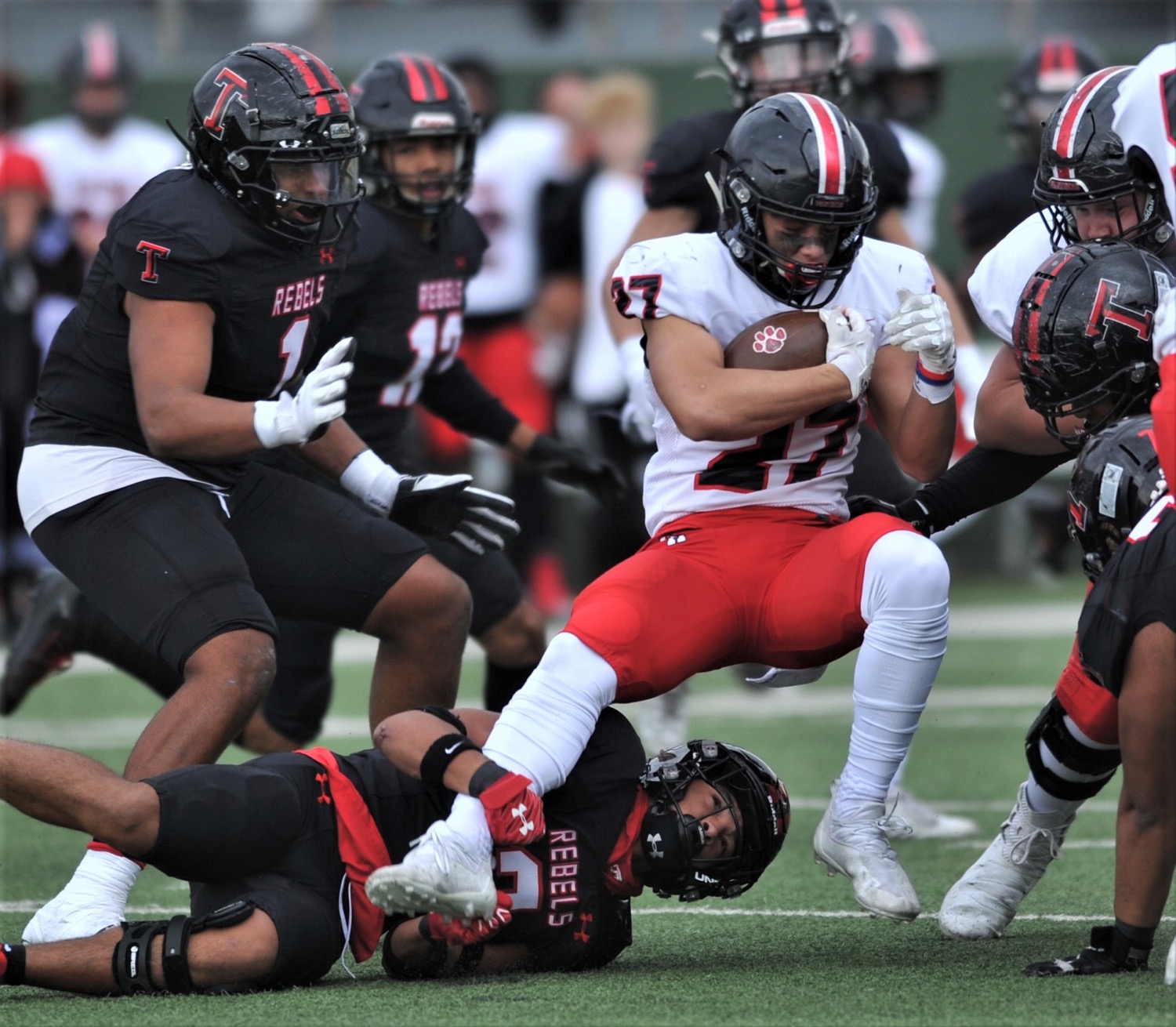 Colleyville Heritage running back Riley Wormley is swarmed by Tascosa defenders during a Class 5A Division I regional semifinal game Saturday at Memorial Stadium in Wichita Falls. [Naomi Skinner/ For Press Pass Sports]

WICHITA FALLS – To many of Tascosa’s opponents over the last four seasons, the almost exclusive ground attack of the flexbone offense has been a mystery.Saturday afternoon, Colleyville Heritage might not have completely solved it, but definitely had a lot of the right answers, or at least enough to end Tascosa’s season.Tascosa had a hard time breaking loose on the ground for the big plays or sustained grinding drives which have become the signature for the Rebels in the Class 5A Division II regional round at Memorial Stadium. Heritage kept Tascosa in check and closed the game strong to beat the Rebels 41-24.There hasn’t been a lot of question over what Tascosa (10-3) likes to do offensively as the Rebels are an unapologetically run-first team under coach Ken Plunk, and with Major Everhart at quarterback keeping the ball most of the time after starter B.T. Daniel broke his ankle at the end of the regular season, it was even more so. But Heritage (12-1) seemed to have a bead on Everhart, who has committed to TCU and whose longest run was 20 yards.“They definitely had a read on us,” Plunk said of the Panthers. “They sold out to stopping the run and we’re not there yet in the passing game with the group we had out there. We played good defense but we didn’t get it done.”The approach didn’t vary from the first two playoff games for the Rebels, when they didn’t complete a pass. They improved on that against Heritage, as Javen Patrick completed two passes to Everhart.Tascosa’s 238 yards rushing are hardly a shameful total, but they were a drop in bucket compared to the numbers the Rebels got used to putting up most of the season. And they did enough to take a 17-14 halftime lead and didn’t trail until midway through the third quarter.But after making two big early plays, Tascosa’s offense went dormant. The Panthers scored 20 unanswered points over a span from the second quarter to the first play of the fourth quarter to take the lead for good.Everhart, who ran for over 500 yards combined in the first two playoff games, was only the third leading rusher for the Rebels against Heritage, gaining 55 yards on 24 carries.“We had to keep our head up and keep pushing,” Everhart said. “We knew it was going to be a tough game coming in. They were just playing faster than us getting off and flying to the ball.”The first two possessions for each team in the second half pretty much decided the game. Tascosa was forced to punt going into the wind, and the Panthers took advantage of good field position, setting up a 47-yard field goal by Bryan Hansen to tie it 17-17.Another punt for the Rebels turned out worse on the ensuing possession, as Keevin Ledoux’s kick was partially blocked and Heritage took over at Tascosa’s 28-yard line. The Rebels again stiffened defensively, but Hansen’s 40-yard field goal gave the Panthers a 20-17 lead they never relinquished.Heritage started sophomore quarterback Luke Ullrich in the second half instead of senior Weston Smith, who had a big game the previous week against Amarillo High. Ulrich was the leading rusher for Heritage with 69 yards on 11 carries, and his 16-yard run on the first play of the fourth quarter made it 27-17.The Rebels did respond, as Treshun Wilson scored on a 60-yard run for his second score of the game to cut it to 27-24 with 10:41 left in the game. But they mounted little else after that.“We were struggling,” Plunk said. “We’ll watch the video at some point. They played good defense and we were a little bit limited offensively, but I’m proud of the kids.”Tascosa was in a position to flip things a few minutes later when Everhart, playing safety, intercepted a deflected pass and returned it to the Heritage 37. But the Rebels were held on downs, and Ullrich hit Leon Covington on a 47-yard gain deep into Tascosa territory to set up a 7-yard scoring run by Riley Wormley to make it 34-24.Wormley scored on an 8-yard run with 1:24 left to cap the scoring.The Rebels started the scoring on their first possession, as Tayden Barnes took a pitch and rambled for a 57-yard gain to the Heritage 5-yard line. Wilson took it in on the next play to give Tascosa a 7-0 lead.Tascosa then got a big kicking game play when Ledoux stormed in to block Hansen’s punt and it rolled into the end zone, where Hudson Farris pounced on it to give the Rebels a 14-0 lead.The Rebels struggled offensively after that. Everhart, in a rare attempt to drop back to pass, was chased to the goal line and stripped of the ball, where Quinn Korinek recovered it in the end zone to get Heritage on the scoreboard to make it 14-7.“We faced the flexbone a couple of times and our coaches have played in it and coached in it,” Heritage coach Kirk Martin said. “They knew what we needed to do. Our kids didn’t panic because they knew what was coming at them. Our kids did a really good job of hitting and tackling and getting to (Everhart) before he got started.”Barnes did run for a game-high 111 yards on only eight carries.Colleyville Heritage 34, Tascosa 24Heritage 7 7 6 21 — 41Tascosa 14 3 0 7 — 24First QuarterT – Treshun Wilson 5 run (Rowen Cabe kick), 9:49T – Hudson Farris recovered blocked punt in end zone (Cabe kick), 9:53CH – Quinn Korinek recovered fumble in end zone (Bryan Hansen kick), 6:55Second QuarterT – Cabe FG 24, 9:12CH – Isaac Shabay 11 pass from Luke Ullrich (Hansen kick), 6:55Third QuarterCH – Hansen FG 47, 7:45CH – Hansen FG 40, 5:04Fourth QuarterCH – Ullrich 16 run (Hansen kick), 11:54T – Wilson 60 run (Cabe kick), 10:41CH – Riley Wormley 7 run (Hansen kick), 3:51CH – Wormley 8 run (Hansen kick), 1:24 Heritage Tascosa First Downs 17 12Rushing 102 238Passing 181 10Total yards 283 248C-A-I 11-28-2 2-5-0Punts.-Avg. 2-28.5 5-27.0Fumbles-lost 1-1 1-1Penalties-yards 4-40 6-53