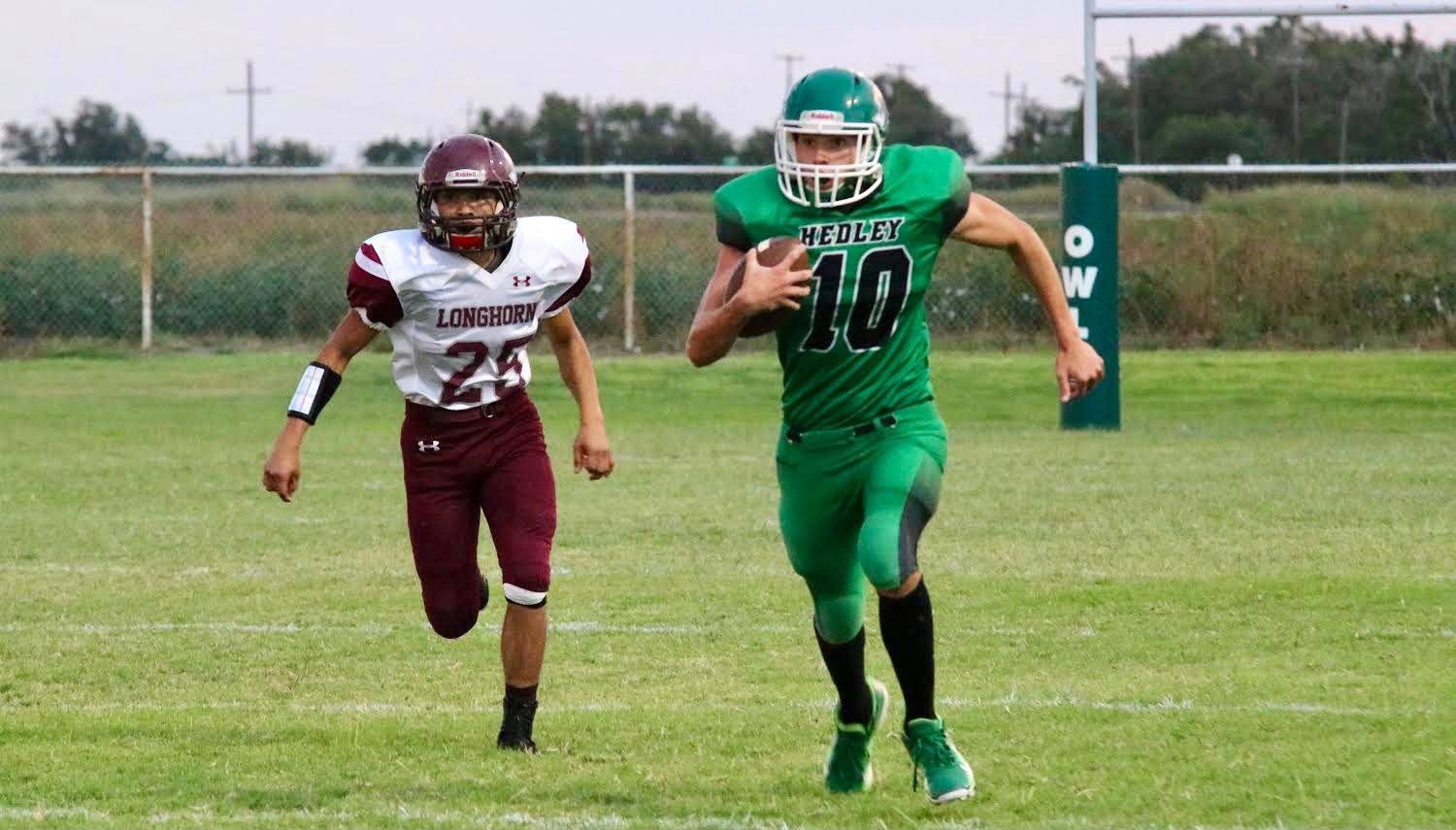 1. How bout them Hedley Owls

Hedley is off to its hottest start since the 2005 season. Head coach Eric Alston and crew were one of the late finishes Friday night after a rain delay led to an 11 p.m., finish. Hedley took out Hart 39-0 in dominating fashion. Hayden Alston, the oldest son of head coach, Eric, finished his night 2-of-2 through the air with 62 yards and two scores. He also caught two passes for 65 yards and two scores. Hedley used a true team effort Friday as the team compiled four players with over 100 yards all-purpose and five different Owls ended with touchdowns.

Hedley hopes to make it 5-0 when they play Lazbuddie later this week.

John Stanaland and his Valley Patriots took the trip down down to Jayton for a battle with John’s older brother, Josh, and the Jaybirds.

This sibling rivalry is still young, but Josh, the Jayton head coach, took a 2-0 series lead amongst the brothers after the Jaybirds downed Valley 53-40 The Patriots (3-1) hung tough the entire way. With only 20 seconds remaining, trailing 47-40, the Patriots had the ball with an opportunity to tie or take the lead, the only issue was they were on their own 9-yard line to start the drive. However, Jayton forced a fumble and capitalized with a scoop and score, extending the advantage to 53-40 with 12 seconds left.

A 2-2 start from the Swifts have left more questions unanswered than when the season began. It’s been a tale of two halves in most of Nazareth’s first three games of the season. The Swifts trailed Happy 13-8 at halftime in a Week 2 matchup, only to see the Cowboys separate themselves in the second half in a 55-8 route. Nazareth answered the loss with an outstanding 40-22 win at home against Groom in Week 3. Things were looking up heading into the matchup with Paducah but again a different Nazareth team showed up as the Dragons outscored the Swifts 36-8 in the second quarter on the way to a 59-14 victory. Time will tell on which team shows up to play Valley this week.

The Panther defense made a statement in the 52-6 mercy-rule win holding the Mustangs to one score. Wildorado’s offense came into the week averaging close to 59 points a contest, but were humbled by the Panthers. On the offensive end, Osiel Ventura had himself a breakout game picking up four touchdowns for Follett in the first half alone. Having another speed threat behind Shayne Franks could be just the thing the Panthers need to prepare themselves for a run into December.

It’s not often that you see the 4-point field goal attempted in Six-man football, but that’s exactly what fans saw from White Deer Friday night. Not only did fans witness the rare attempt, but it was from deep as sophomore kicker Christian Nunez-Oseguera drilled a 53-yard bomb that found its way through the uprights. The bomb from Nunez-Oseguera set a state Six-man field goal record topping the previous high mark of 47-yards by Ray Walls of Blackwell in 1987 according to Six-man historian Leman Saunders.

Happy’s Cutter Hodges had another outstanding game in a 62-12 blowout at Kress. The sophomore led the offense with 269 yards and four touchdowns on only 10 carries.

One of the best parts about Press Pass Sports and Six-man football is the amazing community athletes, coaches, and fans they have created. That being said, Brad Rainer, the McLean head football coach has missed the past two games as he recovers from an undisclosed illness. Rainer is a favorite among the Press Pass crew and many others. The great coach and even better man deserves our thoughts and prayers as he continues to improve.