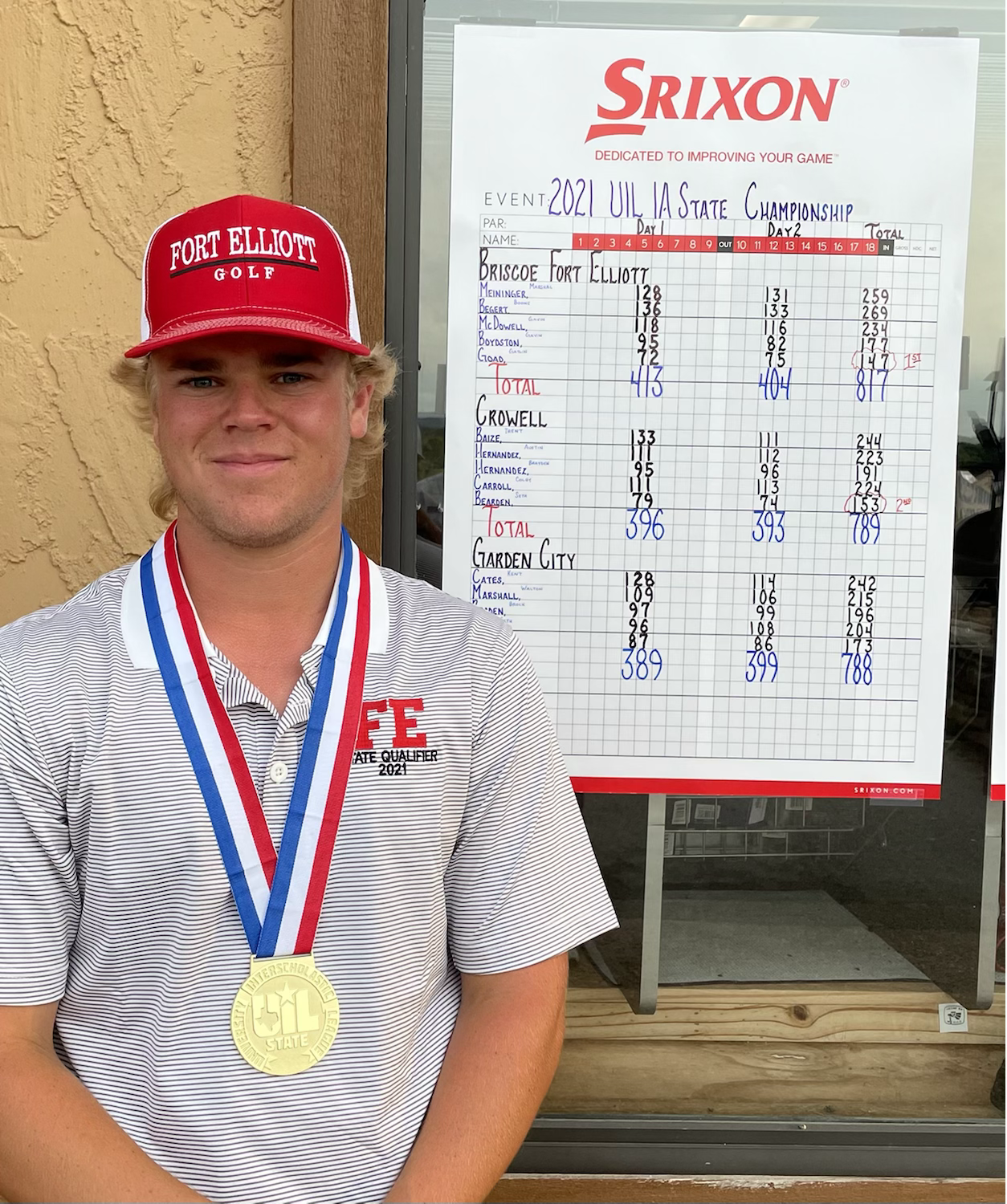 Goad turned in the top performance over the two-day, 36-hole tournament. Despite sitting through hours of rain delays at the Lighthouse Country Club in Kingsland the senior captured his first ever UIL Class 1A state individual championship firing a 72-75— 147.

“This means so much to me,” Goad said. “My family came down and supported me like they have since I was little. This is something I’ve been working toward my entire life, and it was special to reach this goal.”

Goad shot a 1-over par 72 during Monday’s first round. On Tuesday, he reached the ninth hole before an hour rain delay, and by the time he reached the 14th hole the horn sounded again for an even longer stoppage.

“The second delay was a long one,” Goad said. “The delay was close to four hours, and when we started back we didn’t get to get on the range before so we all went back out, and I was a little stiff. But I’m glad we did get to finish.”

Goad was able to shake off the down time ending his round strong going 1-under par in his final four holes to post a 75, sealing his major milestone.

By winning the gold medal Goad also earns bragging rights joining his older sister, Shaley, as a state champ. Shaley, who went on to play golf at Oklahoma Christian University, was a 2-time Class 1A individual title winner in 2015-2016 at Fort Elliott.

“That really felt good,” Goad said. “I’m always known as Shaley’s little brother so maybe this will change that. But seriously, Shaley is someone I’ve always looked up to and a great motivator and mentor for me. She’s always made me better.”

The Fort Elliott team finished seventh overall at the state meet with scores of 404-413— 417. 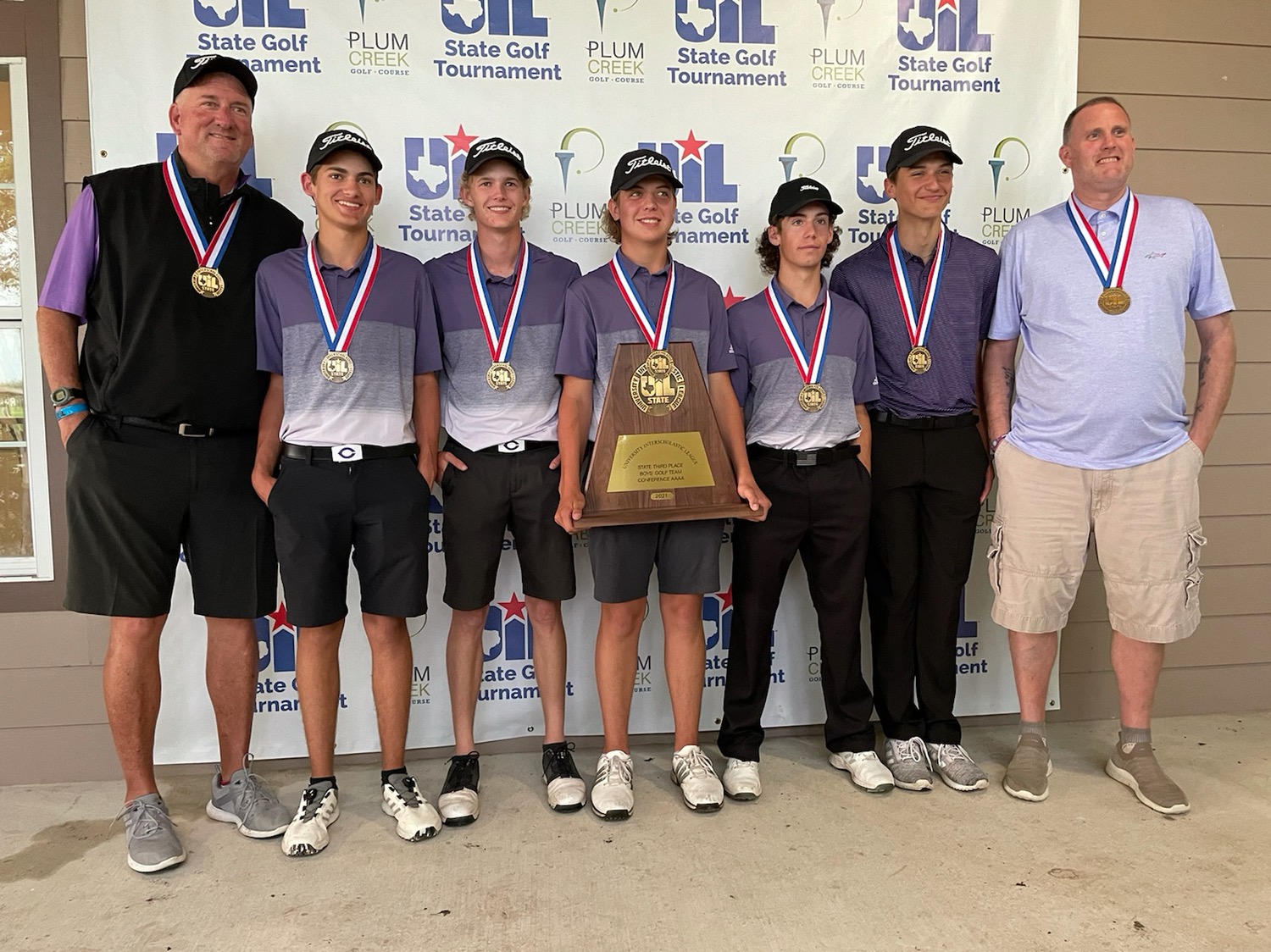 Due to heavy rains Monday and Tuesday on the Plum Creek Golf Course in Kyle, the tournament was scored after 27-holes.

The Eagles were in contention tied for second after day one scoring a team total of 312, and finished with a 159 on an abbreviated 9-hole second day for a total of 471 to grab the bronze medal.

Paden Mask led Canyon firing a 74 during Monday’s first round, followed by a 40 after nine holes Tuesday. 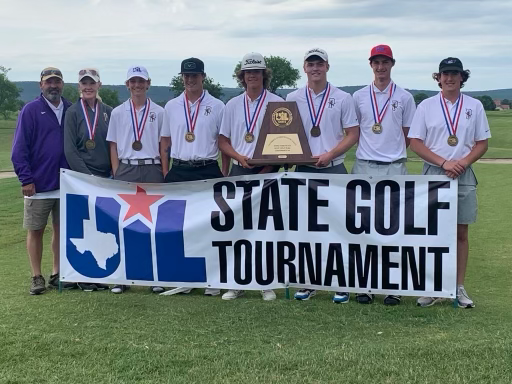 The Panhandle boys golf team claimed a bronze medal during the UIL Class 2A state tournament Tuesday at the Legends Golf Course in Kingsland. [Provided photo]

The Panhandle golf team fought back from fourth place on Monday to surpass Vega and get the bronze medal during an abbreviated UIL Class 2A state tournament at the Legends Golf Course in Kingsland on Monday and Tuesday.

Like Canyon, the Panthers were forced to play an abbreviated 27-hole championship due to the ongoing rains in the area.

Panhandle sat fourth after Monday shooting a 372, trailing Vega by (360) by 12 strokes for third. But on Tuesday, the Panthers clawed back during the 9-holes to post a 175 to Vega’s 189 to hold on for the bronze medal.