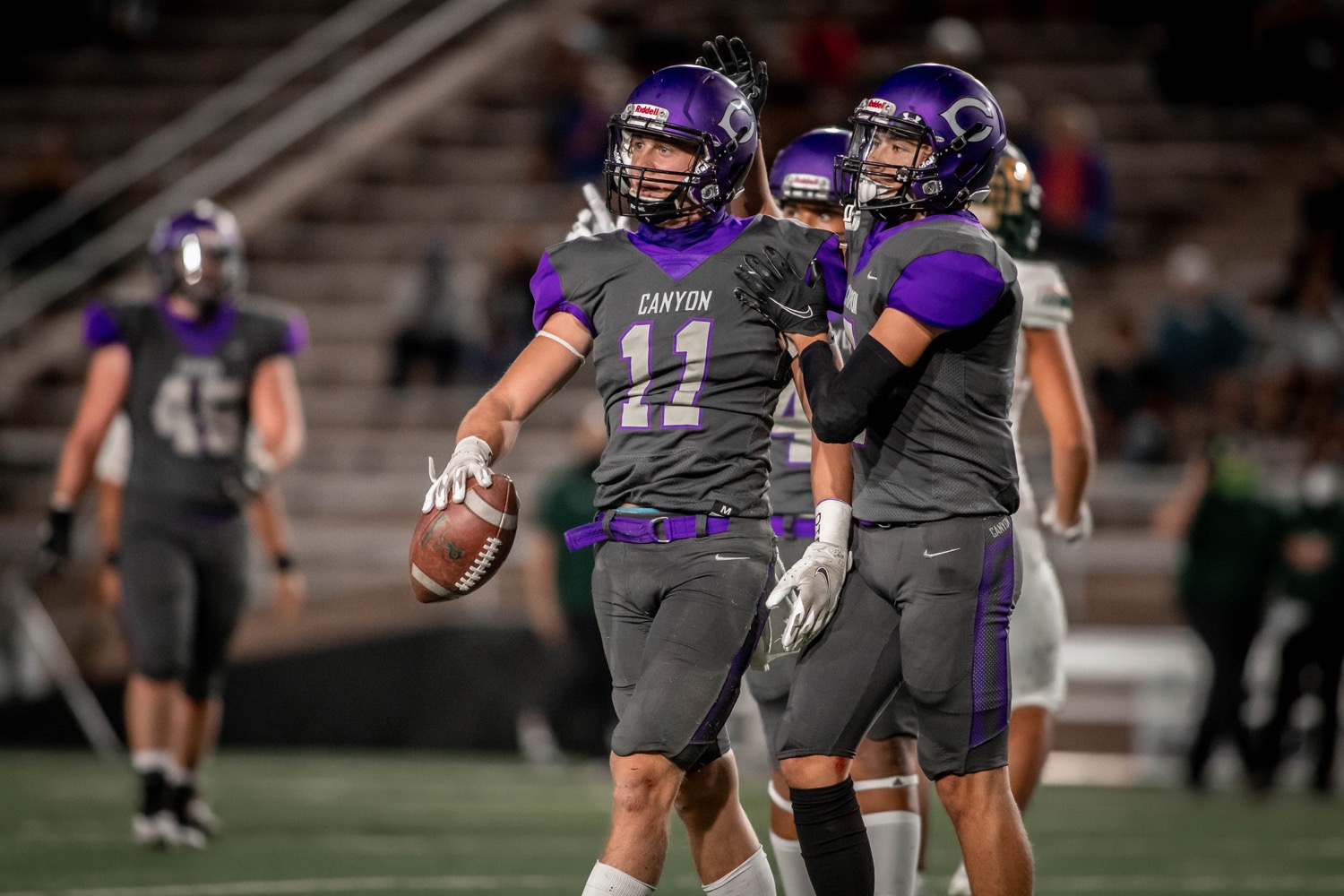 Canyon’s Jett Meek (11) celebrates with a teammate after a pass breakup during a 21-7 district win against Pampa on Thursday night at Happy State Bank Stadium. [Trevor Fleeman/ Press Pass Sports]

The senior led a ball-hawking, hard hitting defensive effort that gave the Eagles a key 21-7 against District 3-4A Division I foe, Pampa. The physical Meek ended the game racking up 12 tackles, nine of which were solo, including three pass break ups to go with A timely interception in third quarter.

It was a career evening for the speedy receiver as the Falcons stayed unbeaten in District 2-3A Division I downing Dalhart 37-21. Sutterfield turned it on with 11 catches for 259 yards and two touchdowns, one of those of 80 yards. If his offensive performance didn’t turn heads his defense did earning 15 tackles and four pass breakups.

The three-year starter and senior captain made plays on both sides of the ball in a 57-3 rout of Caprock. Lemmons hauled in a 9-yard touchdown catch getting both feet down in the corner of the end zone in the first quarter. He then took his skills to cornerback where he took back an interception 65-yards for his second TD.

The shifty speedster helped get the Demons get rolling with a 28-point second quarter on the way to a 48-10 win against Hereford.

Mares scored both his touchdowns in the second stanza breaking loose on runs of 40 and 25-yards.

He’d finish the game toting the ball only 11 times for a a game-high 120 yards rushing.

For any fan that hasn’t seen Ramirez play go to take the time to do so. The two-way star took over Friday night keeping his No. 3 Skyrockets unbeaten thanks to a 42-22 win against rival Clarendon. Ramirez was overpowering pummeling the Broncos for a career-high for 303 rushing yards on only 26 carries with five total touchdowns. At linebacker, he tallied an incredible 16 tackles, forced a fumble, and added a pass breakup.

The freshman is definitely putting his name in the mix for Newcomer of the Year. The Steers thwarted West Texas High, 40-6, and Stancell’s effort was a big reason for it With 11 tackles on defense including two for a loss. On the ground as his true running back position, Stancell and his offensive line whipped WT as he finished with 269 yards and three touchdowns.

The dynamic senior makes this list for a second straight weeks thanks to his heroics leading the Mustangs to a comeback victory, 36-20, at Memphis Friday.

Wheeler was down 20-6 at half, however, Marshall took over in the final two quarters as the Mustangs scored 30 unanswered points. The dual-threat QB went 7-of-8 for 89 yards with a touchdown pass, and then carried the ball 17 times for 148 yards with three more scores.

The Wildcats kept themselves in the playoff hunt with a 7-0 win against Muleshoe in a District 2-3A Division I clash Friday night. The junior fullback was able to punch in the lone touchdown at the 10 minute mark of the fourth quarter for the eventual game-winner. Smith’s touchdown was a part of 92 yards of his night on 19 carries.

The 6-foot-3 gunslinger was near perfect during Canadian’s 73-14 thumping of Friona on Friday. Playing on the first half before taking the rest of the night off, Culwell was already 19-of-22 for 287 yards and four TD tosses.

The dual-threat QB went over the 1,000-yard passing mark for the season in the Longhorns 51-7 victory against Booker on Friday. For the game he made the Kiowas miss with his feet motoring for 148 yards with three touchdowns.