Top 10 performers for Week 9 across the Texas Panhandle 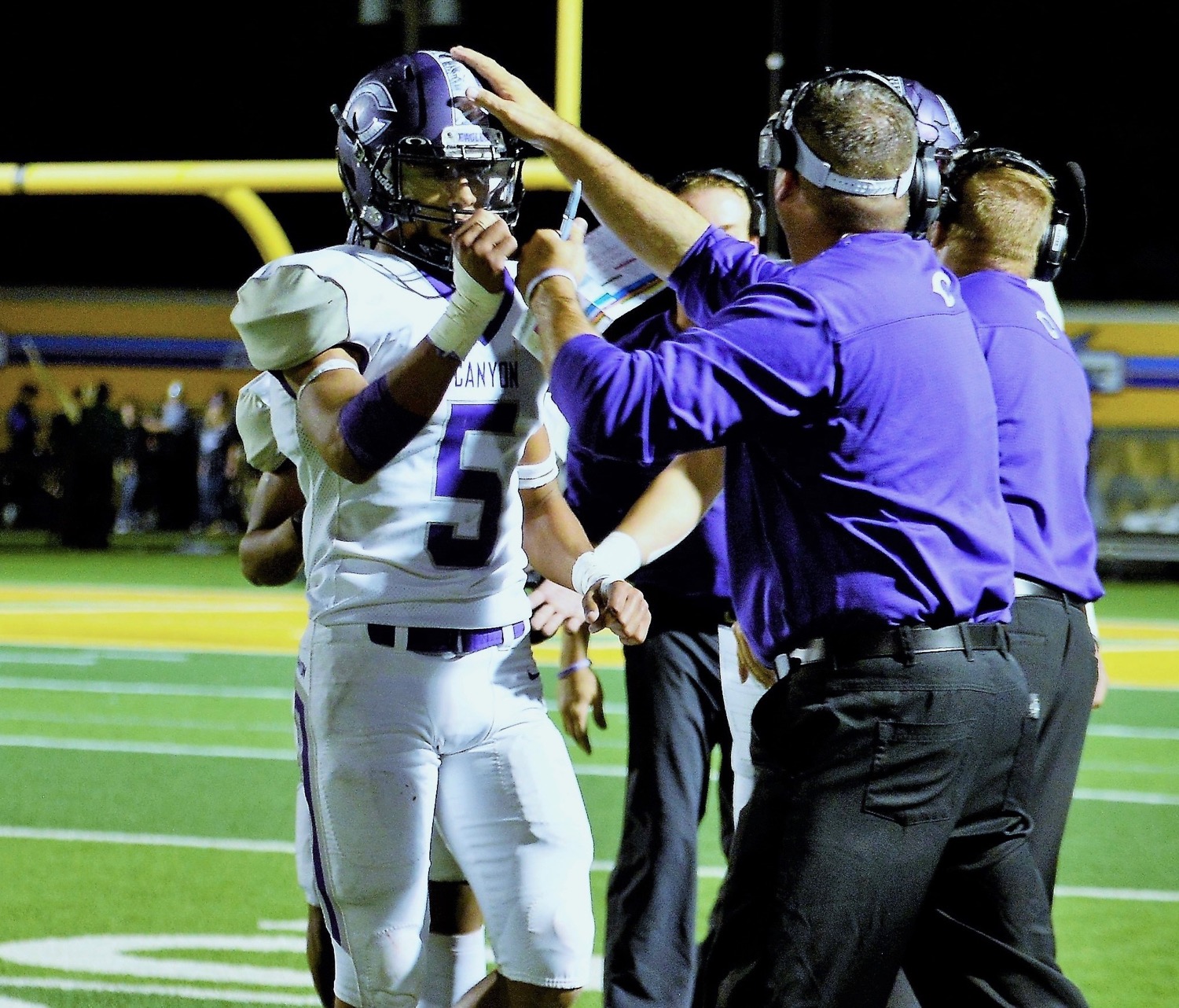 Canyon’s Dario Bressler (5) is greeted by Eagles head coach Todd Winfrey after a touchdown against Pampa during a District 3-4A Division I game Friday night at Harvesters Field. [Ashley Eller/ Press Pass Sports]

The senior running back had a game for the ages in Canyon’s shootout 75-60 District 3-4A Division I win at Pampa on Friday. Bressler couldn’t be stopped anytime he touched the football rushing for 320 yards with six touchdowns, adding 95 yards, and two more scores for an eye-opening eight TDs in the victory.

Brown made his presence known on both sides of the ball during Tascosa’s 60-18 blowout of Lubbock-Monterey. Brown intercepted the Plainsman’s first pass of the game going 43-yards for a touchdown. Less than three minutes later, the senior found pay dirt once again this time taking a pitch 63-yards for a score on the offensive side of the ball.

Herndon took a punt back 80-yards with 4:32 remaining in the game giving Clarendon its only lead, as the Broncos made it stand up stunning No. 5-ranked Wellington, 21-20. Herndon tacked six tackles during the epic road win as the Broncos are now in prime position to claim the District 4-2A Division II title.

Jara gave Hereford fits as part of a Dumas defense that held the Whiteface offense to 106 total yards in the Demons 45-0 shutout. Jara couldn’t be blocked making 12 tackles, four sacks, as well as two tackles for a loss. 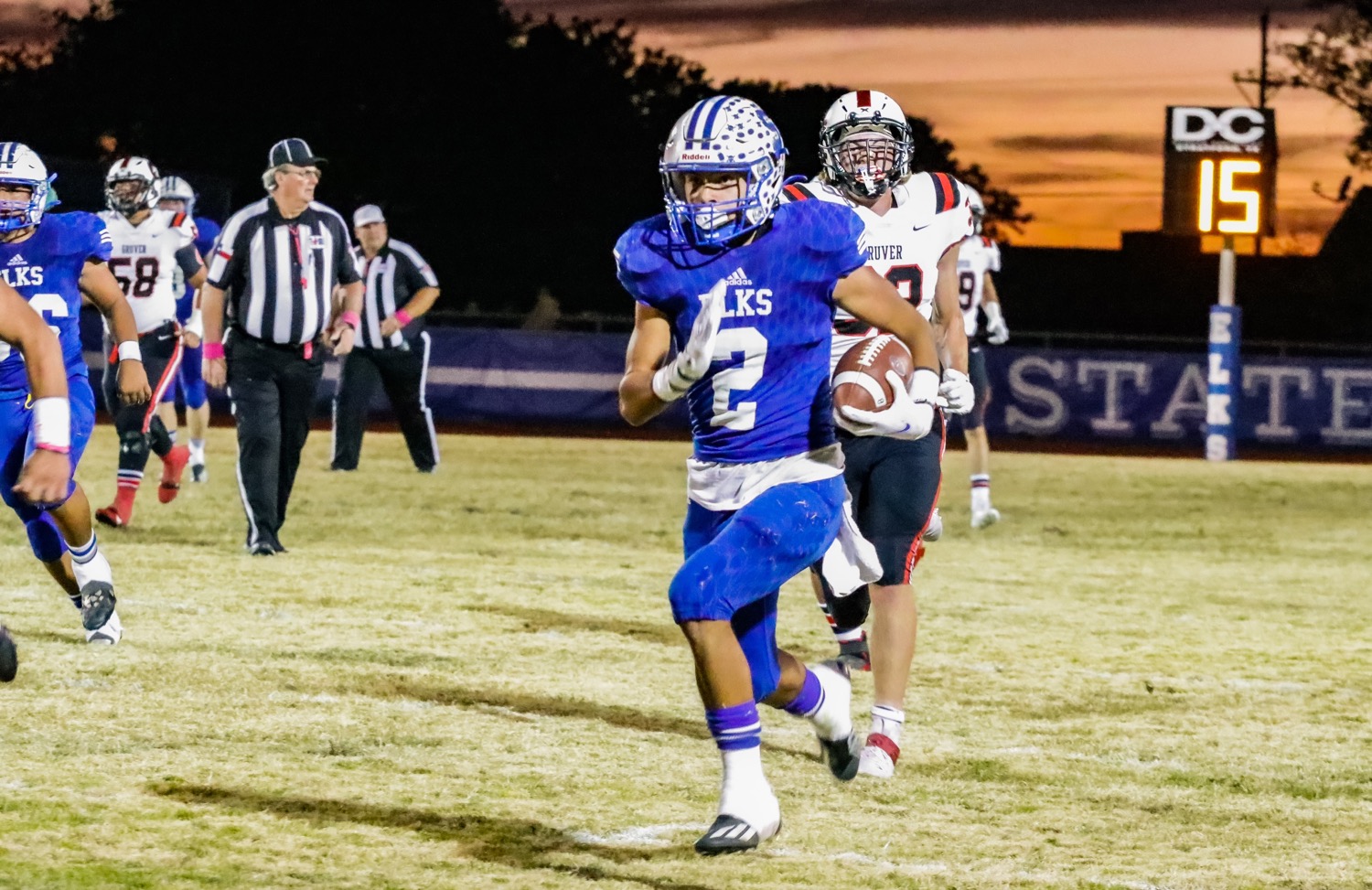 Jones blistered the Greyhound secondary for 214 receiving yards on 11 catches that included a screen pass he took 70-yards for second quarter touchdown. Jones was also part of a massive defensive effort that limited Gruver to 78 total yards. The senior finished his defensive play with two solo tackles and three pass deflections.

The junior running back did his part and then some keeping Canadian unbeaten in District 3-3A Division II with a 33-27 home win against Friona. With injuries at certain spots, Ramirez has literally ran with an opportunity, and it showed against the Chieftains. The junior chewed up Friona for 154 yards on 27 carries with three touchdowns.

Bushland had its best offensive showing since a Week 3 win at Canadian, pouring on the points during a 73-9 blowout at Dalhart. Marrell finished the game completing 13-of-17 passes with two scores, and carried the ball eight times for 68 yards.

Torres left it all on the field for Muleshoe in a thrilling 42-38 win at River Road. Torrez was a problem for the Wildcats secondary snagging 13 passes for 174 yards with a touchdown.

Beard was the catalyst for Valley’s clutch 70-68 victory at Happy that secured first place in District 1-1A Division I. The speedy back amassed 173 yards on the ground on 18 carries with three of those resulting in touchdowns. Beard also added a receiving TD.

The Eagles kept their playoff hopes alive in a big way thanks to a wild 53-46 shootout victory at home against Olton. Woodward led a very potent ground attack for Sanford-Fritch stacking up a team-high 127 yards on only 12 carries with a touchdown.