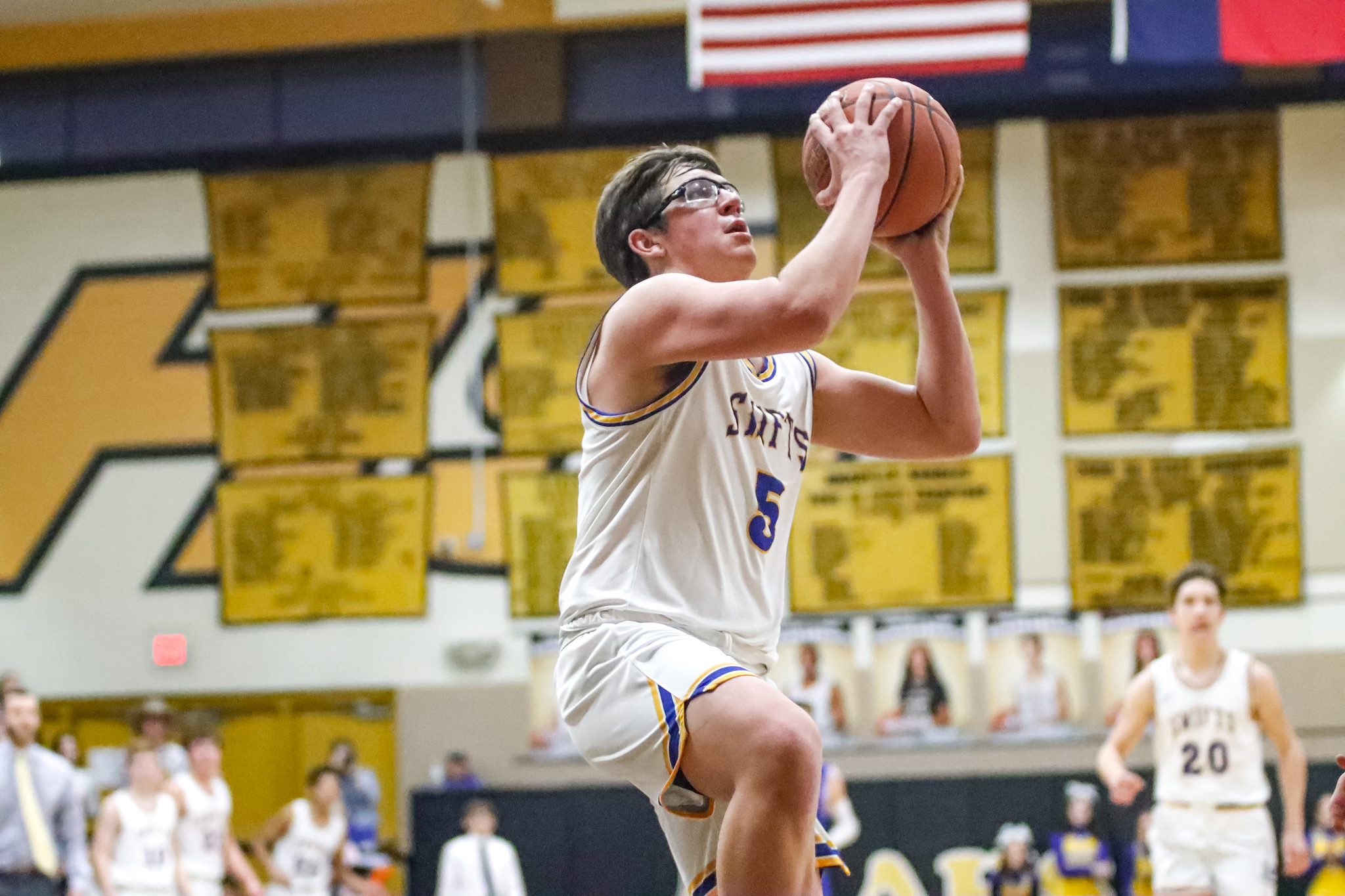 Nazareth’s Trent Gerber goes in for a layup against Valley during a Class 1A Area round game at the Amarillo High Activity Center on Thursday night. [Ben Jenkins/ Press Pass Sports]

Nazareth is headed back to the third round of the playoffs for an impressive 14th straight year.

The Swifts held off a late surge from Valley for a 57-49 win during a Class 1A Area round game at the Amarillo High Activity Center on Thursday night.

Nazareth found its gear midway through the first quarter. Freshman Kayle Rogers nailed a hook shot to get things rolling, then it was the hot-hand of senior Trent Gerber burying two first quarter 3-balls. From that point forward the Swifts were in control up 35-20 by halftime.

The Patriots (19-7) didn’t go down easy making things interesting in the closing minutes getting the lead back within single digits with 1:23 left in the fourth. However, Rogers and Carson Hieman came in clutch for the Swifts at the charity stripe going 7-of-9 down the stretch to ice the game.

Rogers led all scores with 17 points including a perfect 3-of-3 shooting from beyond the arc. Gerber added 11.

Jaxson Edwards did his best to keep Valley in it scoring a team-high 11 points.

The Swifts (23-11) will play the winner of Friday’s Wildorado-Booker winner in the regional quarterfinals next week.

It’s been smooth sailing for defending state champion Texline during the first two rounds of the UIL playoffs.

The Tornadoes, who have now won nine straight postseason games dating back to last year, jumped out to an extremely fast start and never looked back throttling Hedley 97-42 in a Class 1A Area round game at Randall on Thursday.

In two wins against Hart and now Hedley over the past three days, Texline is clicking on all cylinders averaging 99 points a game. The Tornadoes also picked up their 30th win on the year, improving to 30-3 overall, and will now meet Friday’s Springlake-Earth-Silverton winner in next week’s regional quarterfinals.

Canyon dominates Seminole in second half to advance

For one half against Seminole, the Canyon Eagles hardly appeared to be a team carrying a No. 14 state ranking and focusing in on their second straight trip to the region quarterfinals.

For the second half, though, they nailed the landing.

Canyon thoroughly dominated in the final two quarters against Seminole, taking the lead for the first time late in the third quarter and cruising from there. The Eagles gave up only 11 points in the second half and found some offensive continuity to soar to a 52-37 victory at Wolfforth Frenship.

It guarantees that Canyon (27-5) will play in next week’s region quarterfinals against the winner of Friday’s game between Lubbock Estacado and Greenwood.

Seminole (12-20) appeared to have other plans. The Indians shut down the Eagles offensively in the first half and at one point led 26-15. Canyon scored the last four points of the first half to cut it to 26-19 at halftime and took some momentum into the second half.

The Eagles steadily chipped away at the lead and when Cade Cornelson scored on a steal, was fouled and made a free throw, they had their first lead at 32-30. They never trailed again.

Cornelson led Canyon with a game-high 17 points, and Brooks Wagner scored 12 points, all in the second half.

John Cottrell led Seminole with 15 points. However, the Eagles held him to two points after halftime.

The Bushland Falcons exploded in the second half to soar past Alpine 73-37 in a Class 3A Area round contest in Seminole on Thursday.

The game was tight through the first two quarters as the Falcons held a 17-12 lead after one, and a narrow 31-27 advantage at halftime.

But the second half was a different story. The Bushland offense caught fire in the second half outscoring the Bucks 22-5 in the third quarter to blow the game open with a 53-32 lead after three quarters.

Cole Purcell and Baylor King were a huge part of the Bushland victory with each going for 20 points.

Bushland improves to 18-9 overall, and will now face Friday’s Shallowater-Kermit winner in next week’s regional quarterfinals.

Dimmitt season came to an end at the hands of Abernathy 56-30 in the area round at Frenship.

The Bobcats finish the season 20-10 overall. The Antelopes (16-8) advance to the regional quarterfinals to play Friday’s Tornillo-Tulia winner.