Tascosa runs over Chapin for another bidistrict victory 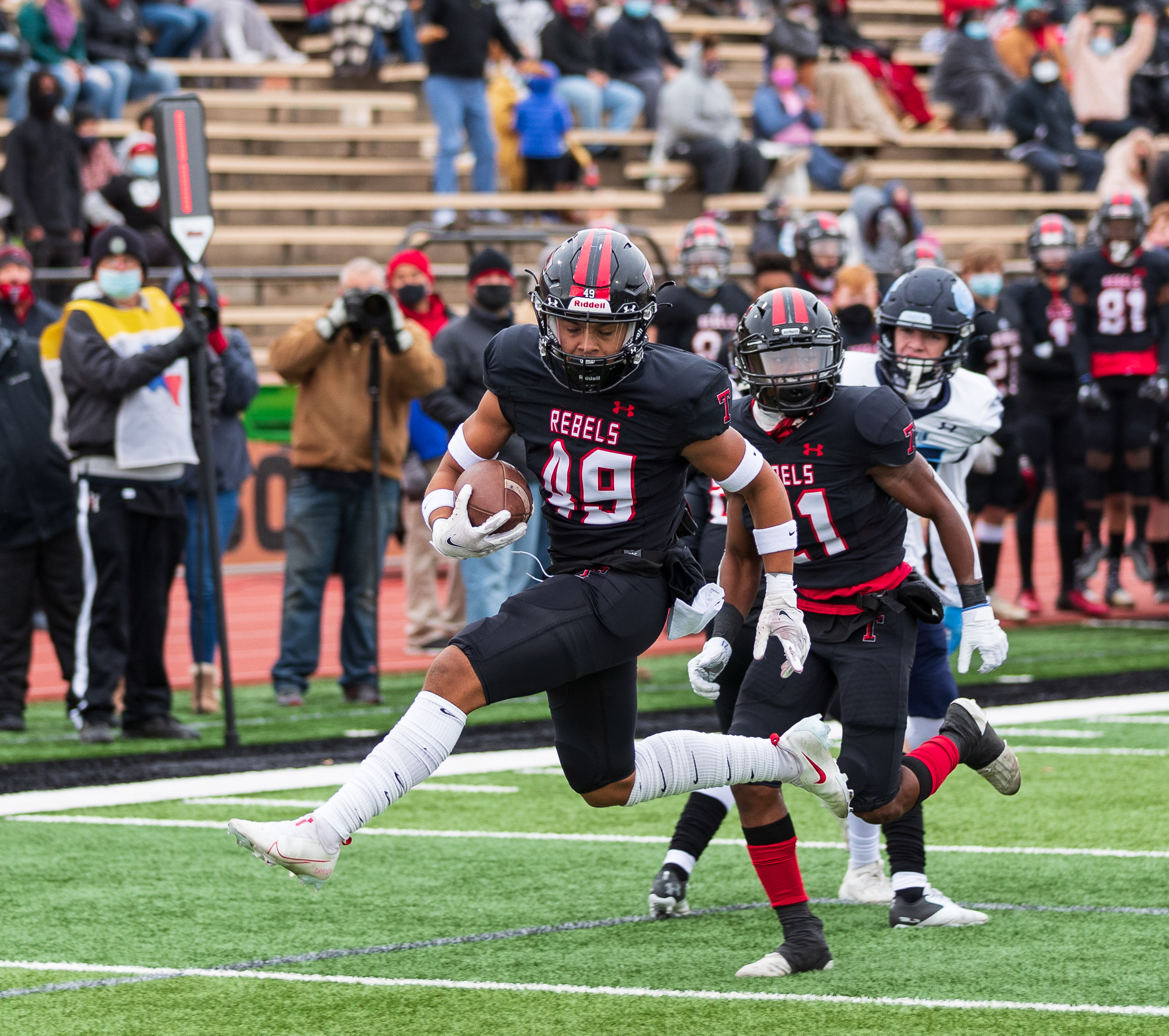 Tascosa’s Tayden Barnes leaps in for a score during the Rebels stomping of El Paso Chapin during a Class 5A Division bidistrict game at Dick Bivins Stadium on Friday afternoon. [Tom Carver/ Press Pass Sports]

Regardless of when they play, the Tascosa Rebels are making this bidistrict playoff victory thing a habit by now.

Hosting El Paso Chapin in an unusual noon game Friday at Dick Bivins Stadium, the Rebels seemed undeterred in carrying on business as usual in their Class 5A Division I bidistrict playoff contest. The early start meant a quick start for Tascosa, who was never seriously threatened in rolling to a 56-7 victory, marking the sixth time in the last seven seasons that the Rebels have gotten past the first round of the postseason.

Taking into consideration the new classification (Tascosa’s previous bidistrict wins came in Class 6A), the December first round due to the UIL’s mandated postseason class staggering due to COVID-19 and the early weekday start, the Rebels (8-2) adjusted well considering the circumstances.

“You just go out and play as well as you can possibly play,” Tascosa coach Ken Plunk said. “It’s kind of a crazy deal because we’ve played a football game and we may be able to make it back before school’s out.”

If the Rebels had been graded according to classroom standards against Chapin (2-5), they would have gotten an A. While probably not perfect, they came up with the right answers a lot more often than not.

Tascosa dominated in every phase imaginable, outgaining Chapin by a 418-129 margin, as the Rebels did pretty much what they wanted to offensively in taking a 35-0 halftime lead.

On the fifth play from scrimmage, Tascosa quarterback BT Daniel took the ball untouched up the middle on a 40-yard scoring run for a 7-0 lead. It was the first of two scoring runs in the first half for Daniel.

“Every team is the same to us, we want to show we can be the best team in the state,” said Daniel, who in some form or another accounted for four scores against the Huskies. “The line just makes the job easy for us by giving us those gaps to run through. They’re amazing up front.”

Daniel also burned Chapin for a pair of scoring passes to L’Travion Brown, the only two completions in the game for the Rebels. They hooked up on scores of 33 and 73 yards where Brown simply beat the Chapin defense.

That proved what a prototypical offensive performance it was for Tascosa, especially in the postseason. Nonetheless, Plunk wanted to be a bit less one-dimensional offensively after a 35-33 loss to Lubbock Coronado in the regular season finale last week which decided the District 2-5A Division I championship.

“We knew coming out of last week we missed some opportunities in the passing game and we’ve got to get better throwing the ball,” Plunk said. “We’re not going to throw it 10-15 times a game but when we do throw it, it needs to go for big yards.”

With opponents focusing on Tascosa’s running game (the Rebels ran for 312 yards against Chapin), that can leave a lot of one-on-one opportunities for receivers, which benefited Brown.

“Some teams know we run the ball a lot which they expect, but they don’t know when the pass is going to come and when it does, boom, they don’t know what hit them,” Brown said. “Our coaches always tell us nobody can take us down one-on-one.”

But it was still the running game which fueled Tascosa. Like Jones, Tayden Barnes made the most of his limited touches, as both of his carries went for touchdowns, including a 48-yard scoring run to open the second half which ended any illusions of Chapin making it a competitive game.

Barnes actually ended up leading Tascosa with 62 yards in his two carries. Daniel had 60 yards on nine carries. All told, 14 players carried the ball for Tascosa and they all gained yardage.

Chapin averted a shutout on a 5-yard scoring pass from Mason Standerfer to Brendon Ortega in the final minute of the third quarter.