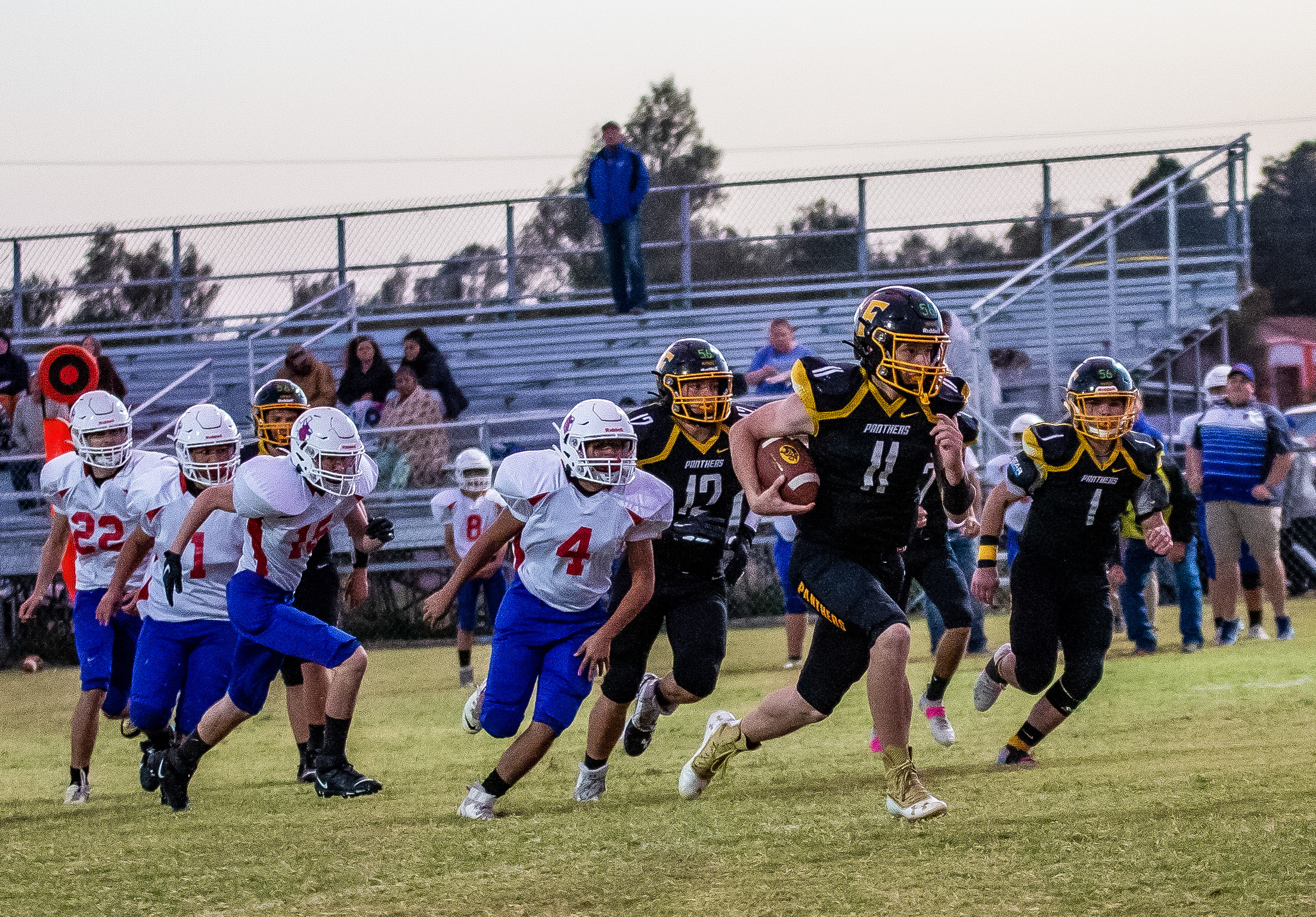 Follett’s Shayne Franks runs in for a touchdown against Darrouzett during a district game at Panthers Stadium on Thursday. [Sierra Franks/ For Press Pass Sports]

1. And then there was one

It has now been nine long weeks since the commencement of the 2020 season and only three teams in the Texas Panhandle remain unbeaten. Among the undefeated teams are Canyon, Wellington, and Six-man’s own, Follett. Follett (8-0, 2-0) continued its dominance with a 68-0 thumping of Darrouzett at home Friday night. The Panthers are cruising heading into Week 10, but will face Miami in what will likely be the district champion decider. Follett is looking primed for a perfect regular season, we’ll see if they get it done.

The Cowboys are a shoe in for the No. 1-seed in District 1-1A Division I after their 62-28 beating of the Valley Patriots Friday night on the road. The story heading into this one was the undefeated Patriots going against what was certainly their toughest opponent of the season. The Cowboys showed just why they were the No. 6-ranked team in the state. Stetson Jameson did what he does finishing with eight total touchdowns. Jameson ran for 161 yards on 18 carries. Happy’s defense however needs some credit for its impressive work, holding Valley to just under 250 total yards in the contest.

3. The Darkhorse becomes the favorite

In their first season playing Six-man football, the Springlake-Earth Wolverines hold a 4-3 overall record and are 2-0 in District 2-1A Division I. The record may look subpar, but doesnt tell the story of a team that has adapted to a strange game in uncertain times. The three losses on the season have come from Happy, White Deer, and Groom, formidable opponents to say the least. I did not have Springlake-Earth winning their game Friday night, and that’s exactly why the 74-28 thumping of Petersburg is so huge. No one expected this team to be where they are at under their circumstances, but now they sit at the top of their district with a great chance of becoming the No. 1-seed.

On Thursday it was announced that both the games out of this district were cancelled. Silverton forfeited to Wildorado and Hart forfeited its game against Groom. Hart and Silverton then made the decision Friday to forfeit the rest of the season. This means Groom and Wildorado will be the playoff representatives out of the district. The two teams have moved their Week 11 matchup to Friday, Oct. 30 at 7 p.m. in Wildorado for the district championship.

This also means that Groom and Wildorado will have two weeks off before starting the playoffs unless they decided to find games.

Coming into the night, the Claude Mustangs had not been known for their offense. Well, the Mustangs gave McLean everything they wanted and more, as Claude led 54-38 early in the fourth quarter. The Mustangs had been rolling all night, and looked to finish the upset, but the Tigers had other plans. A program with so much success in recent history was not ready to go down without a fight. McLean went on to outscore the Mustangs 32-6 in the final quarter. The win keeps the Tigers in the race for a playoff spot.

It was a long drawn out scrap till the end, but the Nazareth Swifts pulled out the 66-50 win against Kress on Friday night. Down two starter after a big loss to Petersburg in Week 7, the Swifts were in desperate need of a win. Kress was in the same boat, with a loss already in district. Nazareth (5-3, 2-1) came off firing taking a 44-8 lead late in the second quarter. The wear and tear of the Swifts started to show in the second half, however, as they were outscored by the Kangaroos 34-22. In the end, Kress got the game close but the Swifts big lead allowed them to hang on. Luke Betzen continues to fuel this Nazareth offense as the senior back finished his night with seven total touchdowns adding 387 yards in the contest. This win keeps the playoff hopes alive for the Swifts.