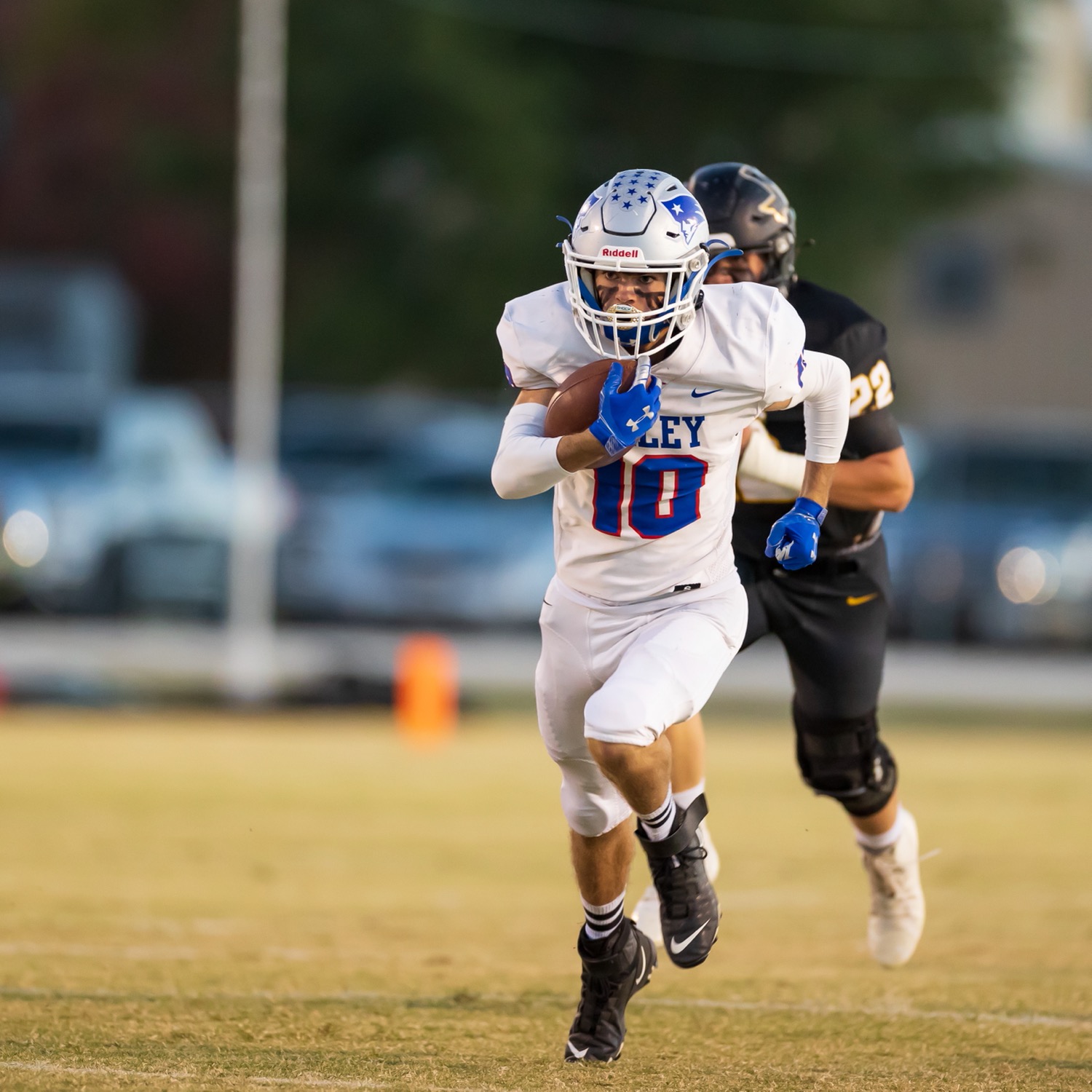 Valley’s Blake Beard gets loose for a touchdown against Happy during a District 1-1A Division I game Thursday at the Cowboy Corral. [Tom Carver/ Press Pass Sports]

1. Valley takes command of District 1-1A Division I race

Happy and Valley met on the field for the 26th time since the turn of the century at the Cowboy Corral in Happy on Thursday.

What the fans saw was the smallest margin of victory and possibly the best game as well in this series with Valley securing a 70-68 dramatic win that wasn’t decided until the final 11 seconds of the game.

The big win for Valley (6-3, 3-0) now puts them in the drivers seat for the District 1-1A Division I title only needing a win next week against White Deer, at home, to secure the title.

Happy (5-3, 1-1) led this spirited battle at the end of one, 20-16, which was also the last lead the Cowboys had in the game. Valley outscored Happy 32-16 to hold a 48-36 lead headed to the fourth where the game really got going. In a span of four minutes the two teams scored a combined six times with Valley holding a 70-60 advantage with 2:24 left to play.

On the ensuing Patriot possession the Cowboy defense stiffened, getting the ball back with 1:17 remaining. Happy drove 44 yards, capped off by a TS Bow plunge from 2-yards out to pull Happy to within two, 70-68, with 11 seconds remaining. However, the onside kick was recovered by the Patriots and dashed any hopes of a Cowboy miracle finish.

Junior spreadback Blake Beard was the catalyst for the Patriots big win amassing 173 yards on the ground on 18 carries with three of those ending in the endzone along with a score on the receiving end. Happy’s Swiss Army Knife, senior TS Bow, led the Cowboy attack with five total touchdowns and finished with 147 yards on 10 carries. Bow also had three receptions for 56 yards. The Cowboys junior signal caller, Camden Sperry, finished the night going 12-of-23 for 177 yards and four touchdown strikes.

Many had the Nazareth Swifts winning this one, but few didn’t see it going the way it did. Just like it was stated in the predictions this week, Kress (5-4, 2-1) was a team that was not going to be overlooked. Nazareth (6-2, 2-0) came out quickly taking a 25-8 lead before the first half. The Swifts struggled early to convert on extra-points in a matchup that every single point mattered. The Kangaroos were able to cut into the lead on a Quavi Ellis 15-yard catch from Landry Young just before halftime.

This score gave the Kangaroos all the momentum they needed on an already emotional Senior night. Kress went go on to outscore the Swifts 26-8, taking a daunting 40-33 lead over Nazareth with only 3:22 left in the ballgame.

Nazareth stuck to its running game and controlled the clock. The Swifts marched their way down the field milking as much clock as they could. Facing a fourth and goal for the with only 14 seconds left in regulation, down 40-33, the Swifts sent a toss to Luke Schulte on the left side. Schulte rolled out to make a pass. With no open receivers in sight Schulte faked a pass and quickly sprinted to the opposite side of the field to walk into the endzone untouched to cut the lead to 40-39 with only eight seconds left.

But, here came the tough decision for Nazareth coach Tyler Goodwin. Does he run it for 1-point from 3-yards out or kick the field goal for 2-points. Kicker Trent Gerber, who had completed only 1-of-4 attempts to this point. Coach Goodwin put it on his senior and sent Gerber out for the point after. Gerber sent it through the uprights and the Swifts survived 41-40.

Schulte led both teams in rushing with 276 yards and four touchdowns. The win secures a playoff spot for the Swifts, but their seeding will be decided this week in a matchup with Springlake-Earth (6-1, 2-0).

The Mustangs have aspirations of making a second playoff appearance in as many years this season, but those aspirations were almost erased this week by an upset-minded Silverton Owls squad that forced the game into overtime. Injuries have plagued Wildorado throughout the year, but they have continued to overcome them with a next man up mentality.

In the huge win, multiple freshmen were seen making contributions to the team, including the go-ahead score in overtime when freshman A’vien Lewis delivered the double pass throw into the endzone finding Trey Mathews on a fourth and 15 play. Dustin Bryant scored the 1-point conversion giving Wildorado a 59-52 lead.

Silverton responded with a score of its own, but it was Matthews making a huge stop on the 1-point attempt to secure the victory for the Mustangs. Wildorado (7-1, 1-0) now faces Hart (1-8, 0-1) for its second district matchup looking to take some momentum from their thrilling victory.

4. Coming down to the wire

Miami and Follett had no issue taking on its district opponents this week. The Warriors took out Lefors 57-12, as Follett was able to get the first half shutout in a 60-0 beatdown of Darrouzett Friday night.

District 1-1A Division II has three teams at the top that are all vying for a playoff spot, and this week will be incredibly important to see just how that will play out. Miami (4-4, 2-0) already beat Hedley (7-1, 1-1) in a 53-47 game last week, but the Warriors now face undefeated Follett (7-0, 2-0) in Week 10. This matchup looks like a district champion decider, but don’t forget the Owls, who will get a crack at the Panthers regardless of Follett’s final score with Miami.

The Division 1 Six-man state champions, Sterling City came into the season as an obvious favorite to repeat and take the crown in 2021, but after Week 9 is that still the case?

The Eagles were defeated in a marathon game with May in Week 2 where the Tigers tamed Sterling City in a wild 104-80 win. May took over the No. 1 ranking after that victory.

Speaking of rankings, the Eagles were still ranked at No. 2 coming into the week, but it was a team without a ranking that stick it to the Eagles. Westbrook entered the matchup at 3-4 overall, which is not telling for what its season has been. The Wildcats four losses have come from three top 10 ranked teams in Division I, and No. 1 Motley County from Division II. In this matchup however, Westbrook came out hot. The Wildcats led 40-6 at the half almost getting the mercy-rule, but Sterling City didn’t go away that easily. The Eagles rallied back to take the lead 50-46 midway through the fourth quarter. The Wildcats regained the advantage 52-50 with 2:37 left to play. The Wildcats got some much needed insurance on a turnover that lead to another score with only 22 seconds left that sealed a 60-50 win.

If that all weren’t enough, this was Westbrook’s first win over Sterling City since the move to Six-man in 2008. Before that, the Wildcats hadn’t beaten the Eagles since Oct. 10, 1940. The teams had only met nine times in that during that long stretch with Sterling City winning each matchup.

6. The Texas Panhandle stands with Pampa and White Deer

Tragedy struck the small towns of White Deer and Pampa this past week and immediately the amazing Texas Panhandle folks were on the scene to show support in such uncertain times. Panhandle fans wore blue in their support for the Carson County brethren at their game against Boys Ranch. Pampa gave a moment of silence in its game this week that was played with heavy hearts.

The Six-man community also wore blue in support of their friends in White Deer. We here at Press Pass Sports send our love and prayers to those affected by the tragic incident.