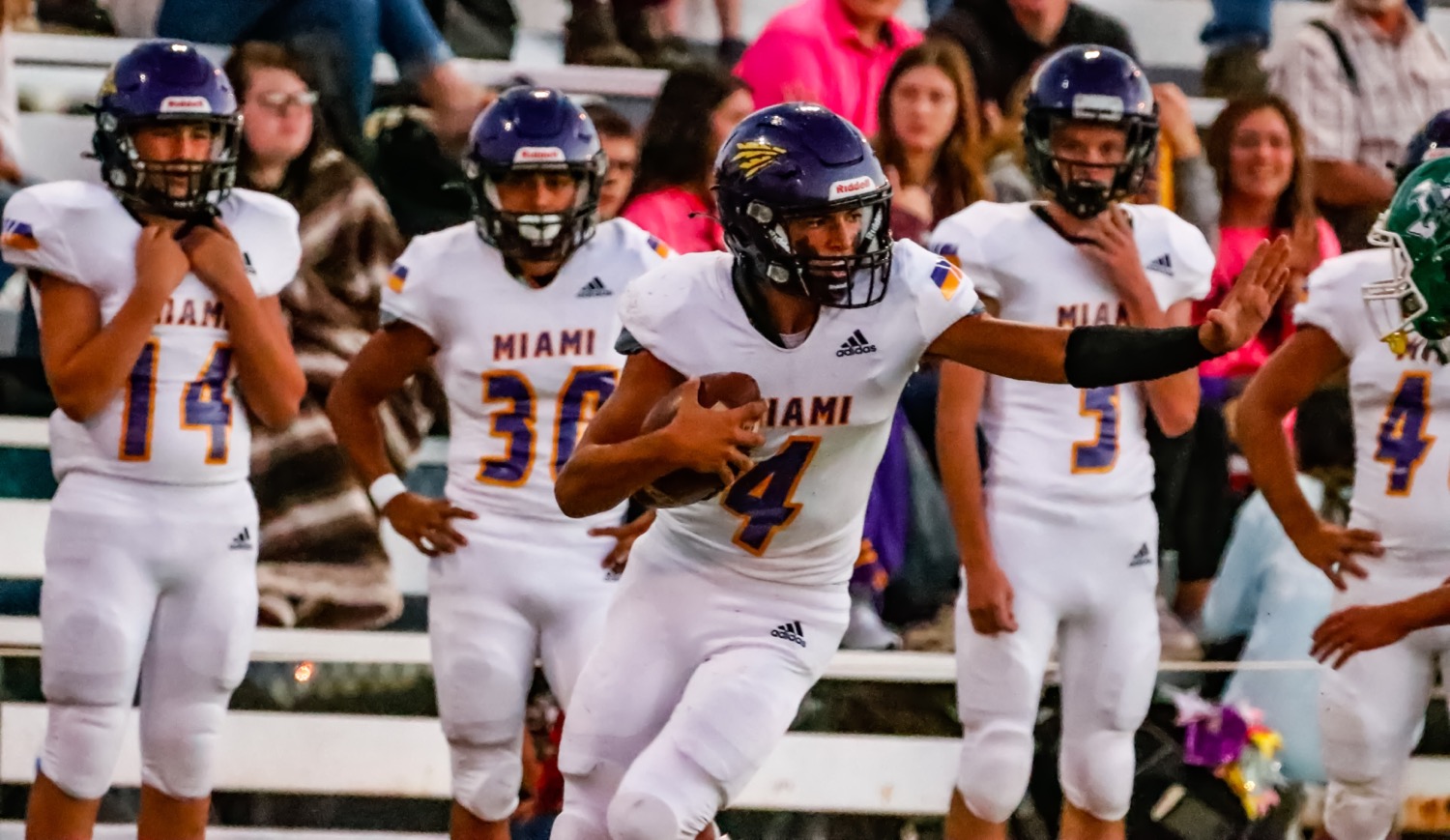 1. Warriors hold off Owls in good one

In what felt more like a playoff game, the Miami Warriors scored with just over a minute to play to down Hedley for a thrilling 53-47 win at Owls Field on Thursday night.

Hedley falls from the ranks of the unbeaten to 7-1 overall, and 1-1 in District 1-1A Division II.

Miami stays in control of its own playoff destiny improving to 3-4 overall and 1-0 in district.

The Warriors were in control up 45-27 in the fourth quarter only to see the Owls put up 20 unanswered points to take a 47-45 lead with three minutes left in the game.

However, the Warriors were able to drive down the field getting a Luke Wheeler 4-yard score with just over a minute to play that sealed the victory.

Miami was led by do-it-all standout Haiden Thompson. The super sophomore completed 17-of-26 passes for 206 yards and pair of touchdowns, as well as rushing 13 times for 110 yards. On defense, Thompson made 10 solo tackles with an interception.

Wheeler added 117 yards of offense with three scores, and made six tackles on defense.

The Happy Cowboys have are all smiles after downing rival White Deer in convincing fashion, 60-15, on Friday.

In their first district contest of the year, the Cowboys (5-2, 1-0) were hurling the ball all over the field behind QB Camden Sperry. The junior gunslinger threw for 189 passing yards on an efficient 12-of-17 passing with six touchdown passes. Sperry’s favorite target on the night was definitely Tryce Johnson who snagged four catches for 89 yards and three TDs. As good as the offense looked, Happy’s defense was equally impressive. Happy held the Bucks to 59 total yards.

Groom was riding high having won four of their last five games, but fell in a tight game to Saint Jo 62-48 to close out non-district play Saturday. St Jo is a Class 1A Division I school out of Region III that reached the regional quarter finals in 2020.

Groom (4-3 overall) trailed 36-32 at the break. In the second half, Saint Jo pulled away scoring twice before the Tigers could find the endzone taking a 52-32 lead. The loss finishes a tough non-district schedule for the Tigers who will play a big roll in the Region I Division II playoffs.

White Deer sophomore kicker Christian Oseguera is best known for his 53-yard field goal against Spur in Week 4 to set a Six-man state record for the longest kick.

The following week, Osguera got tangled up in a pile on the defensive side of the ball against Springlake-Earth that ended his season. Oseguera tore his ACL, MCL, and LCL ligaments in his knee on the play, and now faces major knee surgery. The White Deer community has set up a GoFund me account for Christian to help his family pay for the surgery. Anyone that’d like to donate to the Oseguera family please visit this link, https://www.gofundme.com/f/help-the-oseguera-family-out?qid=daaf3490bd730335fbe1c09f99d59afa

Pivotal matchups with major playoff implications are coming this week in Division I,

In District 1-1A, the Happy Cowboys (5-2, 1-0) host the Valley Patriots (5-3, 2-0) at 7 p.m. Thursday night. This has become a fierce rivalry that is fun to watch. Both teams have battled injuries, but nonetheless this matchup will be one for the books, and will decide playoff seeding.

In Division I, seven of the top 10 teams were in proved why they were ranked stood ground outscoring their opponents by a combined 433-62. Ira was the lone team to play all four quarters defeating Rotan 52-39.

May has outscored its opponents by a 527-122 margin with 80 of those coming to No. 2-ranked Sterling City.

In Division II, the top 10 showed their strength by outscoring their opponents 431-143. Motley County has dominated its opponents outscoring teams by a 516-92 count with six wins against Division I foes.

The West Plains volleyball team opened their inaugural season with a pair of wins on Tuesday night.