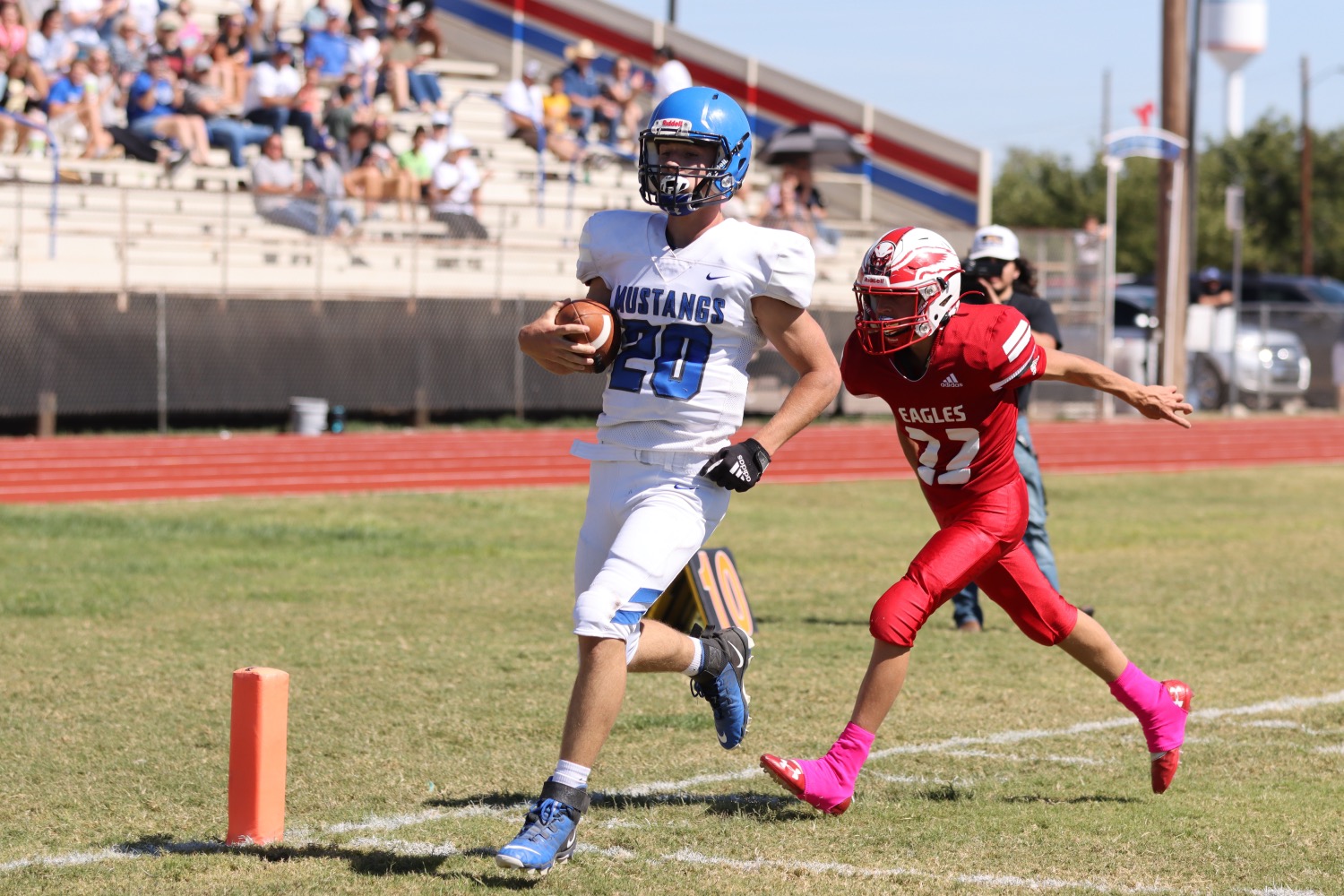 Wildorado’s Dustin Bryant strolls in for a touchdown against Chillicothe during a non-district game on Saturday in Claude. [Dency McClure/ Texas 1A Fan]

Since the beginning of the program in 1996, the Hedley Owls have never seen a season more productive than they have this year. It was an anticlimactic seventh victory to seal the accomplishment, getting a forfeit win over Darrouzett, but an accomplishment nonetheless. Before this year, the most wins in a season came in 2005 when the team reached the six win mark. The Owls (7-0, 1-0) have been a feel good story so far, and they aren’t done just yet.

2. Follett ready to make a push

The Panthers joined the Owls as the only two undefeated teams remaining of the Six-man teams in the Texas Panhandle after a 58-8 beating of Lefors on Thursday. Follett is battle tested and have proven themselves against strong opponents including going 4-0 against Division I teams this season. With an elusive running game, and a strong defense that hasn’t allowed more than 30 points in a game this year, Follett is dangerous and primed for December football.

The Patriots have seen their ups and downs through the regular season. With that said, district play has begun and it’s time to buck up, and the Patriots did just that in their 49-0 victory over McLean Friday.

The Patriots (4-3, 1-0) began District 1-1A Division I play snapping a three-game losing skid where they lost to playoff contenders. Valley has fully prepared itself this season to face one of the hardest districts in the Texas Panhandle.

The Nazareth Swifts had one heck of a Senior night on Friday cruising to a 50-0 victory over Petersburg. The win was thanks in big part to yet another five touchdown game for spreadback Luke Schulte.

Wildorado came out of Claude with a 53-8 blowout victory over Chillicothe on Saturday to close out non-district at 6-1. The Mustangs used a big game from Trey Mathews. On offense, Mathews completed 5-of-6 passes for 75 yards with three touchdowns. On the defensive end, Mathews was huge, picking up eight tackles, two sacks, a pick six, and a fumble recovery.

Only a week into district play the pieces are starting to fall and fans can see an outline of who’s in and who’s on the outside looking in. Starting in Division 1 with District 1-1A, Happy has been the top dog, and until an opponent steps up it should stay that way. Valley and White Deer will also have something to say in the end.

District 2-1A Division I seems to be all Springlake-Earth (5-1 overall). The Wolverines are a clear cut favorite with Nazareth looking like the obvious second.

In District 1-1A Division II Follett (7-0, 1-0) is the team to beat, but it’s the second spot that will be very interesting. Hedley battles Miami at home Thursday with the winner more than likely getting the second spot.

In District 2-1A Division II, Groom and Wildorado face off on the final week of the season to see who takes the crown. Last year’s matchup wasn’t close, as the Tigers rolled, but don’t be surprised when the Mustangs give Groom a game.

Former McLean state champion coach Clint Linman has his Whitharral Panthers soaring up the Division II rankings until his Panthers fell short against a Top 10 team in Anton on Friday night in a District 3-1A showdown. It was a back-and-forth affair until the Bulldogs finally were able to pull away for a thrilling 56-51 victory. Anton was able to seal the victory by picking off a Whitharral pass on its final attempt to score. This game has major implications down the road when it comes to the bi-district round that will impact Texas Panhandle teams.