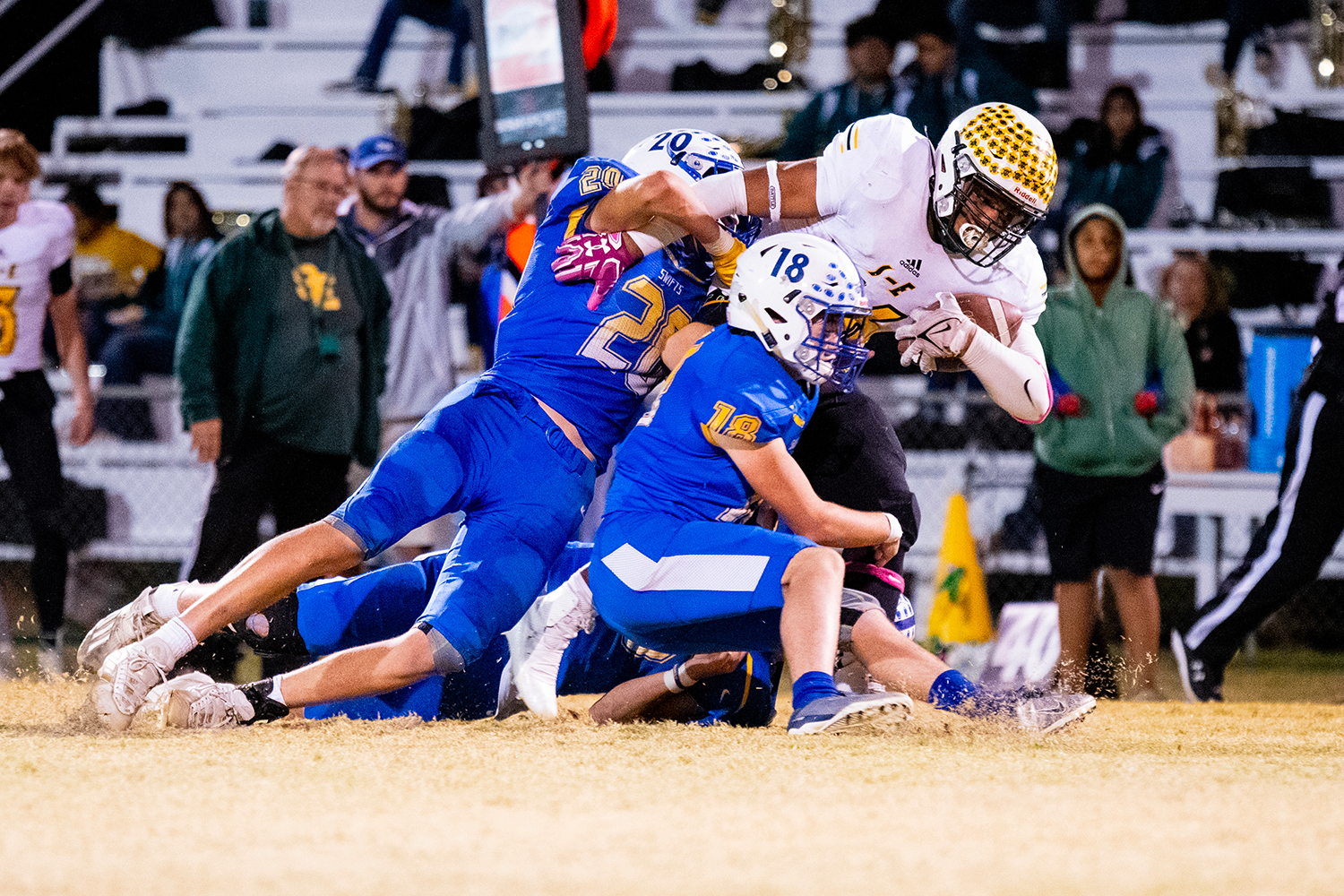 Springlake-Earth’s Keshan Holmes is pulled down by two Nazareth defenders during a District 2-1A Division clash Friday. [Larry Martinez/ Texas 1A Fan]

Nazareth gave heavily favored Springlake-Earth everything it wanted, but in the end the Wolverines rallied to late to spoil the Swifts upset bid, 54-50.

With 1:38 left in the fourth, Earth took a shot down the field connecting on a 68-yard touchdown to take their first lead since early in the first quarter. Earth (8-1, 3-0) made the lead standup to take the outright District 2-1A Division I championship in thrilling fashion.

The Swift defense held on as long as possible, but the explosive Wolverines offense wouldn’t be denied.

2. District 2-1A Division II title to be decided

It’s been a long time coming, but here we are at the final game of the season. Groom and Wildorado both stand undefeated in district, just as they did in 2020 when the two met up to decide the eventual champion. Unlike last year’s contest, Groom is not an overwhelming favorite. The Tigers (6-3, 2-0) have not had the regular season some expected to have after a huge state semifinal appearance last season, but Groom has come a long way since their early season woes. The offense is dangerous and led by a duo of speedy brothers, Damon and Stephen Kuehler. On the other end of the coin, Wildorado’s defense is looking forward to the test of slowing them down. Wildorado (8-1, 2-0) is still a young team on the Six-man stage, but are looking to make some noise making a second playoff appearance in as many seasons. Defense will be the key for the Mustangs in this matchup.

Most believe that it was all but decided last week that the Patriots had secured the District 1-1A Division I championship taking out Happy, 70-68, but Valley had to beat White Deer to make it official.

Valley did just that by thumping the Bucks 61-12 to finish off the regular season 4-0 in district and 7-3 overall.

This marks the first district championship for the Patriots since their move back to Division 1 after their state semifinal appearance in 2017.

Since an early season three-game losing streak, the Patriots healed up, and this team is finally returning to form, scoring 60 points a game and holding opponents to just 23 points a contest. Between featured backs, Jaxon Edwards and Blake Beard, as well as the arm of Corbyn Standlee, this Valley team will be a tough out for anyone in this year’s playoffs.

4. Hats off to Hedley

Regardless of the end result of this season, the Hedley Owls have made the 2021 a season to remember. It only took this team eight games to become the most successful Hedley team in program history.

Now sitting at 8-1 and 2-1 in district play, the Owls have an opportunity to do something that has not been done in a decade, and that’s make the playoffs. The price to get in however is a mighty one, defeating reigning champs and 2020 state quarterfinalist, Follett. Never in school history have the Owls beaten the Panthers on the gridiron. This sounds a lot less daunting when you realize that since the relaunch of the program in 1995 Hedley has only faced the Panthers three times, each of which came in the last three seasons. Although a tall hill to climb, the Owls will give it their best effort in order to fulfill their playoff hopes.

With fewer teams in the Six-man playoffs, the opening round is actually considered the area round than bi-district. This season the area round has become one of the most important, especially for Division 1. Valley and Happy out of District 1-1A, now have dynamic backs returning just in time for a playoff run. Valley has Jaxon Edwards, as the Cowboys will see the return of Pace Bressler to their backfield later this week. Those two teams will meet up with cross district, Springlake Earth and Nazareth for highly anticipated matchups. Valley will face Nazareth, and Happy will get a rematch with Earth.

In Division II, Follett is the undisputed favorite to win it the region, but there are some underliers that could be just as capable of making a run. The Groom Tigers have flown under the radar after a slow start to the season, but have managed to build up a 6-3 record before taking on district foe, Wildorado. The Mustangs have also been a team with little to no publicity. At 8-1, you have to respect Wildorado and its ability to slow down their opponents offense.

Here we are at the end of yet another Six-man season is coming to a close next week in the Texas Panhandle.This year has shown parody among the Six-man ranks. From new coaches, winning streaks, injuries, comeback victories, and 45-point blowouts, this has been one of my favorites to follow and cover. The ending to the 2021 campaign is almost impossible to predict. Thank you everyone for an amazing regular season, and your support for this small town, small school report every week, it’s truly been a blessing, and a privilege to have you all along for the ride. Even you Gene Franks.