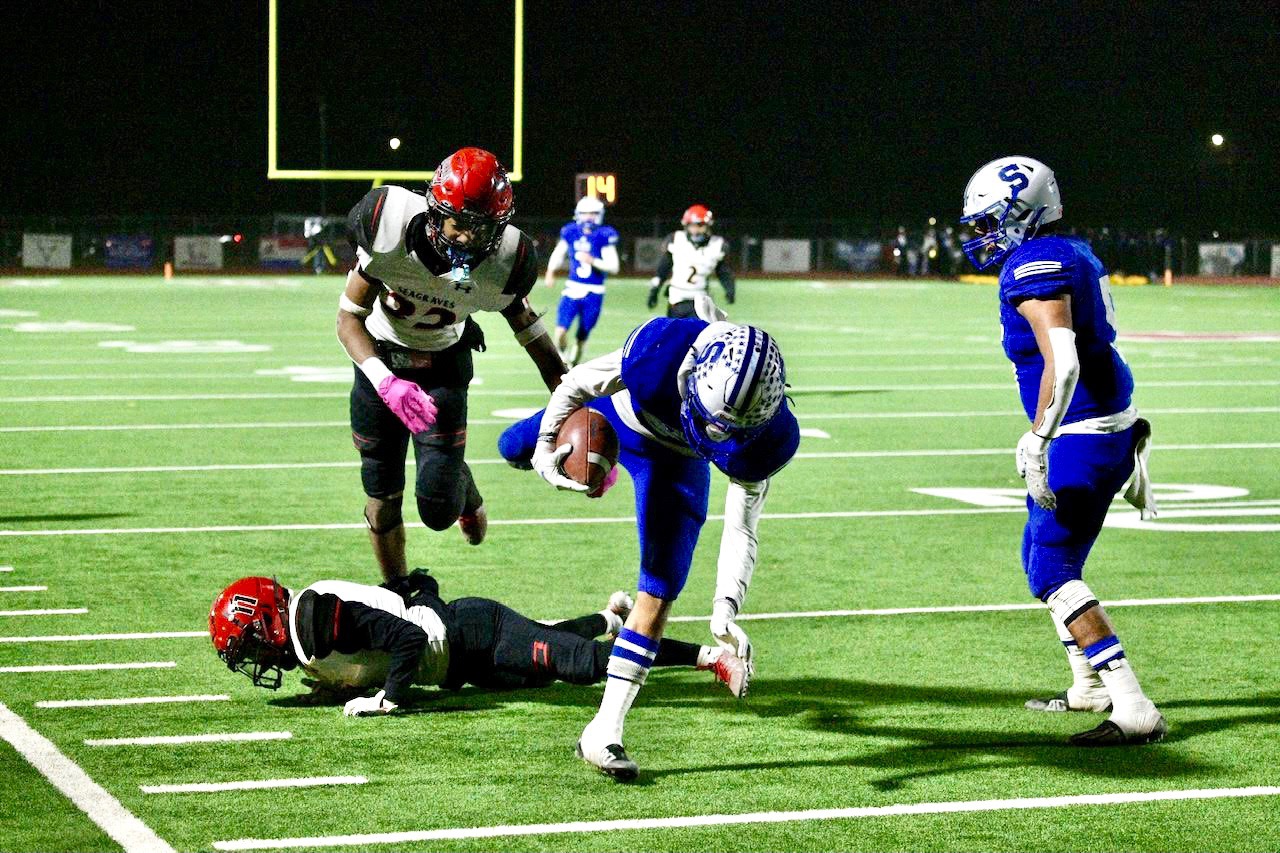 Stratford receiver Dru Jones keeps his balance to run in for a touchdown in the second quarter of a Class 2A Division II area round game against Seagraves on Thursday night at Younger Field in Tulia. [Tucker Stroud/ Press Pass Sports]

Stratford shook off a sluggish first half start, ramping up the offense in the third quarter to pull away from Seagraves for a 48-3 blowout win in a Class 2A Division II area round contest Thursday nightat Younger Field in Tulia.

Despite the final score, this was a close game at the half with the Elks leading 7-3.

Stratford penalties, a turnover, and the Eagles chewing clock, kept Seagraves at an arm’s length throughout the first 24 minutes.

“In the first quarter we really did a lot of things to hurt ourselves,” Stratford head coach Matt Lovorn said. “Give credit to Seagraves. They did a great job of controlling the clock, and picking up first downs. We just weren’t executing, and they kept the ball away from us.”

The momentum changed drastically in the second half as Stratford outscored the Eagles 41-0 in the final two stanzas. On the opening possession of the third quarter, running back Zane Burr broke loose on a 25-yard screen pass for a score pushing the lead, 14-3. Then it became the Dru Jones show.

The senior wideout, who scored Stratford’s lone TD of the first half, walked in on a 3-yard run making it, 20-3. After the Elks stopped Seagraves on a fourth and short, Jones found himself wide open on a seam route for a 40-yard pitch and catch from Rinne. Thanks to a 2-point conversion that followed, the Elks were in control, up 28-3, with two minutes left in the third quarter.

“We didn’t really do anything different in the second half,” Lovorn said. “We just started clicking on offense, and executing. I think the biggest difference is we controlled the line of scrimmage, and the defense did a tremendous job.”

Seagraves (8-4 overall) had found success in its run game early behind Zharion Smith, and Ethan Salazar. In the first half, Seagraves tallied 165 yards total yards. However, the second half was a different story, as the Elks defense clamped down holding the Eagles to 32 total yards.

Jones had three catches for 86 yards with a pair of touchdowns, adding 52 yards rushing on seven carries for two more scores. Burr led the Elks with 117 yards on the ground with a rushing TD, and a receiving touchdown.

Rinne completed 7-of-10 passes for 154 yards with three TD tosses.

Stratford (10-1) is on to the regional semifinals to face Wink at a time and place to be determined. The Wildcats (9-3) blew past Clarendon, 67-26, in an area round matchup Thursday night at PlainsCapitol Park at Lowrey Field in Lubbock, ending the Broncos season at 10-2.

Brock was simply too much for River Road, dismantling the Wildcats, 54-8, in a Class 3A Division I area round matchup at the Mustang Bowl in Sweetwater on Thursday night.

The No. 2-ranked Eagles (12-0) used their powerful offense to dominate River Road, racking up 566 total yards, while holding the Wildcats to 174 yards.

Brock collected 396 of those yards on the ground. Running back Kutter Wilson lead the way for the Eagles picking up 254 yards and four touchdowns on 25 carries. Teammate Brett Tutter added 124 yards and two touchdowns on just six carries.

Dylan Frye toted the ball 18 times for 94 yards to pace the Wildcats.

Brock moves on to the regional semifinals to face the Muleshoe-Jim Ned winner at a time and place to be determined.

Previous article[Photo gallery] Bushland state semifinals vs. Columbus
Next articleRebels, Everhart come alive in second half to get past Centennial