Statement made: Panhandle handles Gruver in 2A showdown; Canadian rolls over Muleshoe 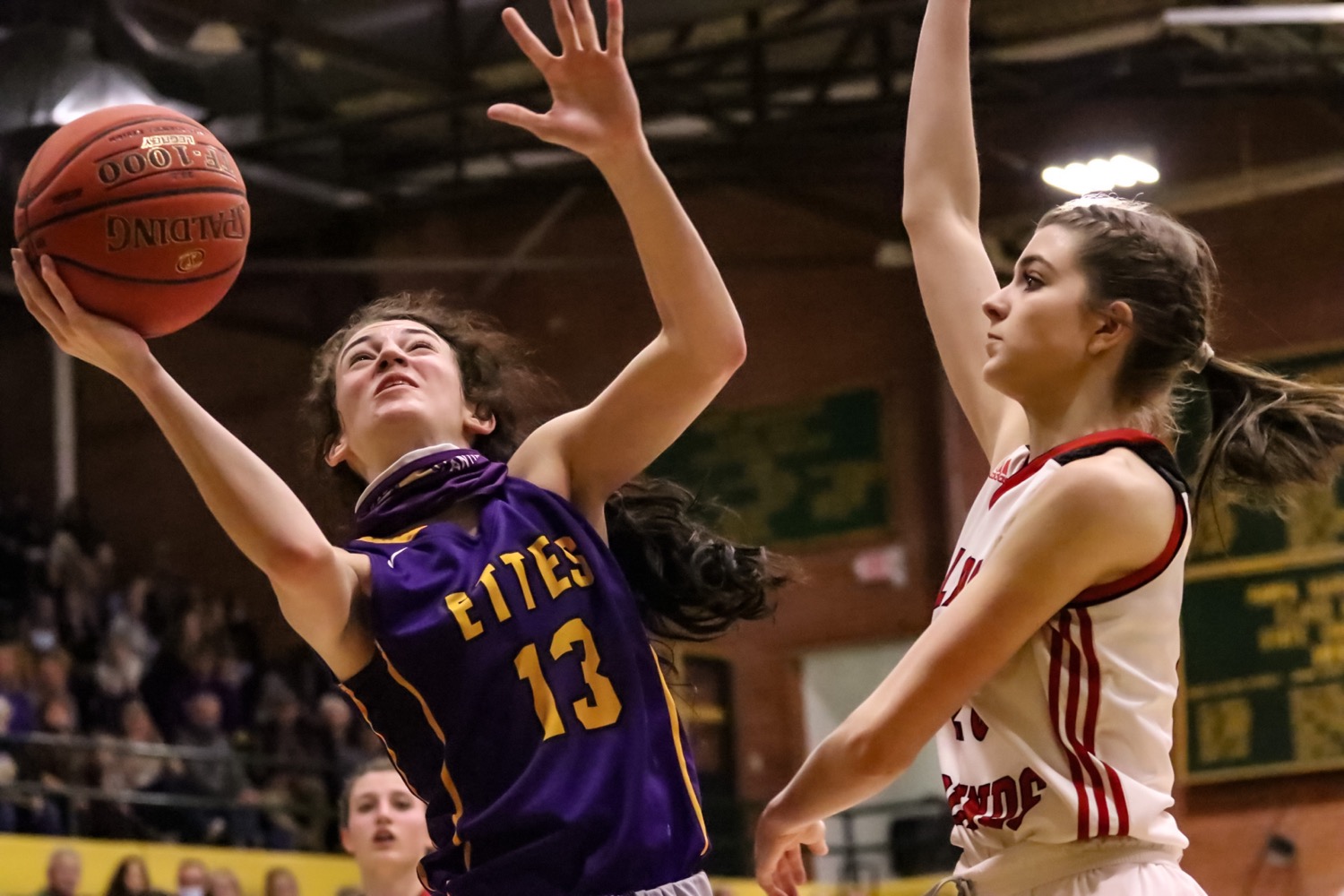 Panhandle’s Mason Jones (13) goes up for a shot over a Gruver defender during a Class 2A regional quarterfinal in Pampa on Thursday. [Ben Jenkins/ Press Pass Sports]

The No. 2-ranked Panhandle Ettes unseated defending champs and No. 8-ranked Gruver in impressive fashion with a 58-43 victory in a regional quarterfinal in front of an electric crowd at the McNeely Field house, better known as “The Pit”, in Pampa on Thursday night.

In a very highly anticipated matchup that fans have looked forward to all season, Panhandle was able to avenge a loss to the Lady Hounds from a year ago in the Region I-2A finals.

“It was a huge performance from our team,” Panhandle coach Rob Schmucker said. “They stepped up, and learned their lesson from last year. They played relaxed, and I’m proud of them.”

The Ettes move to 25-3 overall and now have to wait for their regional semifinal opponent to play out due to the inclement weather of late.

Panhandle played on another level behind senior star Mason Jones. The Ettes never trailed, building a 17-3 lead to open the first quarter. From that point forward the Lady Hounds find themselves chasing a hot-shooting Panhandle team, but never could close the double-digit gap.

Jones won the battle in a matchup of two of the top Class 2A players in the state going head-to-head. The smooth shooting guard gave Lady Hounds Bailey Maupin and the Gruver defense fits, scoring from the outside and in the paint scoring 19 of her game-high 30 points in the first half.

“Mason showed what she does in practice everyday,” Schmucker said. “She shared the ball and was able to get to the basket. She shot it well from the outside, and just proved how great a player she’s been for us in her career.”

“We had a chip on our shoulder from last year,” said Jones, who has signed to play at Division I Tarleton State. “We wanted to win by being us, and that was strong basketball.”

Emmery Sides added 10 points for the Ettes. Panhandle’s defense swarmed Maupin the entire game, however the Division I prospect did pour in 15 points. 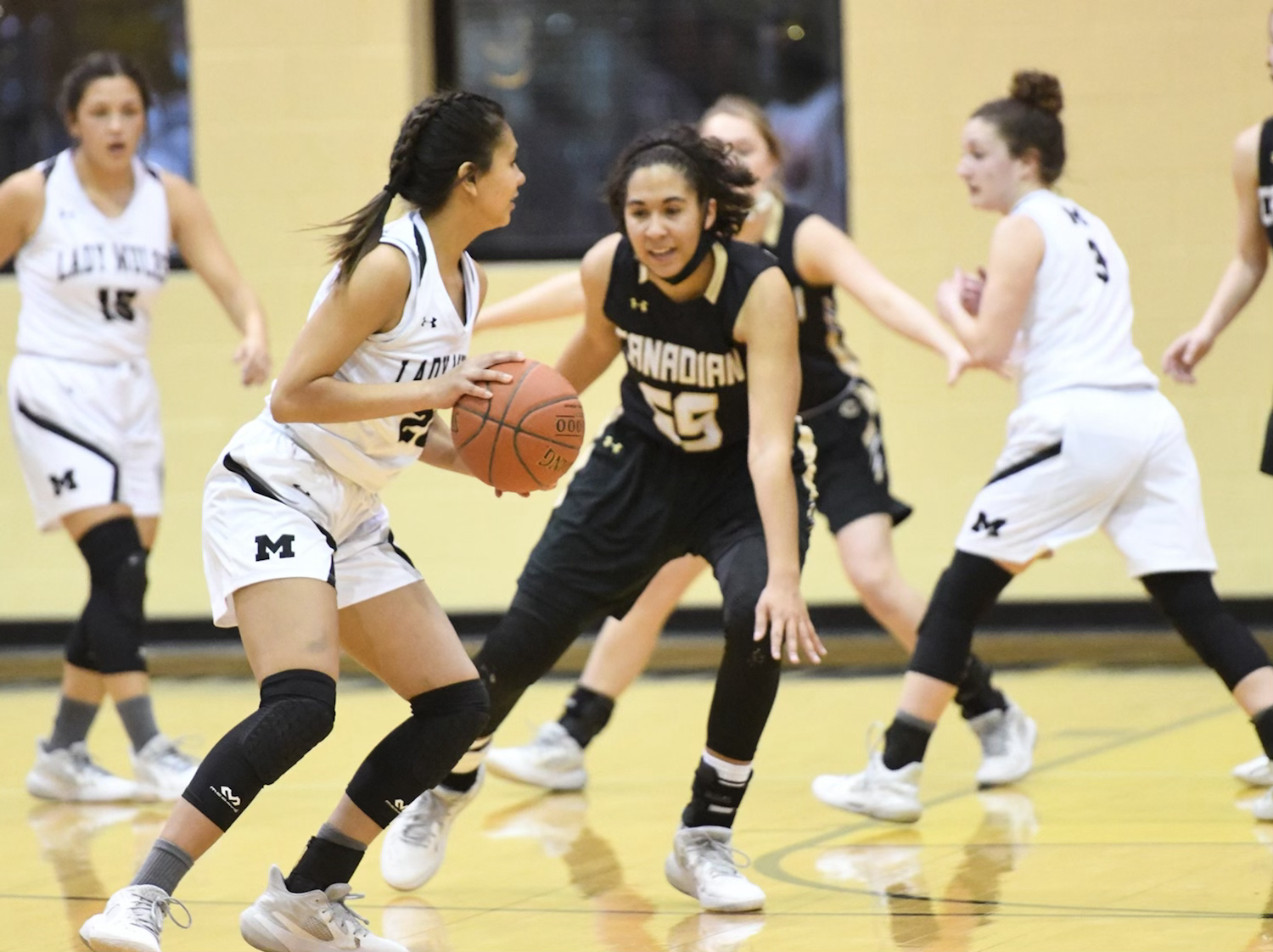 Canadian’s Mattie Boyd defends a Muleshoe player during a Class 3A area round game in Bushland on Thursday. [Alan Hale/ For Press Pass Sports]

The Canadian Lady Cats exploded in the second quarter to put away Muleshoe in a Class 3A area round clash, 80-40, at Bushland on Thursday afternoon.

Muleshoe led 16-15 after the first quarter until the Lady Cats completely took over the momentum. From the start of the second quarter to halftime Canadian dominated goinf on an eye-opening 38-7 run to take a convincing 53-23 lead, and never looking back. Juniors Mattie Boyd and Briley Merket combined for 50 points in the victory. Boyd went off for a game-best 27 points, followed by Merket’s 23. Jasmyn Moreno chipped in 11.

Canadian is now 24-3 overall, and will now face No. 1-ranked Shallowater in the regional quarterfinal at 3 p.m. Saturday at Caprock High School.

Boys Athlete of the Week

Here's the latest High School volleyball district standings from Class 5A to 1A across the Texas Panhandle.