State semi bound: Sandies use big second half to take down Mansfield Summit

Amarillo High proved to be a great team once again Friday night.

The Sandies changed the pace in the second half against Mansfield Summit, and as a result clinched their second Region I-5A title since 2014 downing the Jaguars, 60-51, at the D.L. Ligon Coliseum.

“We’re back,” said Jason Pillion, who is in his 15th season as the Sandies head coach. “This team doesn’t have bad practices. Most people see what they do on Tuesday’s and Friday’s, but they play this hard everyday. They are so much fun to coach.”

Junior guard Brendan Hausen had an emotional embrace with Pillion moments after the win. Hausen said it’s been a goal to get the Sandies into the state limelight since they fell short in the regional final in 2018.

“I was in eighth grade when we lost in Snyder in the regional finals” Hausen said. “A couple of us went up to coach Pillion and hugged him after that loss. We promised him we’d get him here, and we’re doing it.”

AHS improves to 25-3 overall, and will now face the Kimball Knights (17-10) in a state semifinal at a time and place to be determined. Kimball stunned No. 2-ranked Lancaster in the Region II-5A final, 77-75, Friday.

In order to get past Summitt (25-6) the Sandies had to adjust to an extremely up-tempo style of play from the Jaguars and tremendous defensive pressure. In the first half, Summit controlled the contest taking AHS out of its rhythm pushing the ball up and down the court, and smothering sharp shooter, Hausen. The Jaguars led by as many as seven, 24-17, in the first half, taking a 24-17 lead into halftime, while holding Hausen to two points.

The final two quarters were a completely different story. 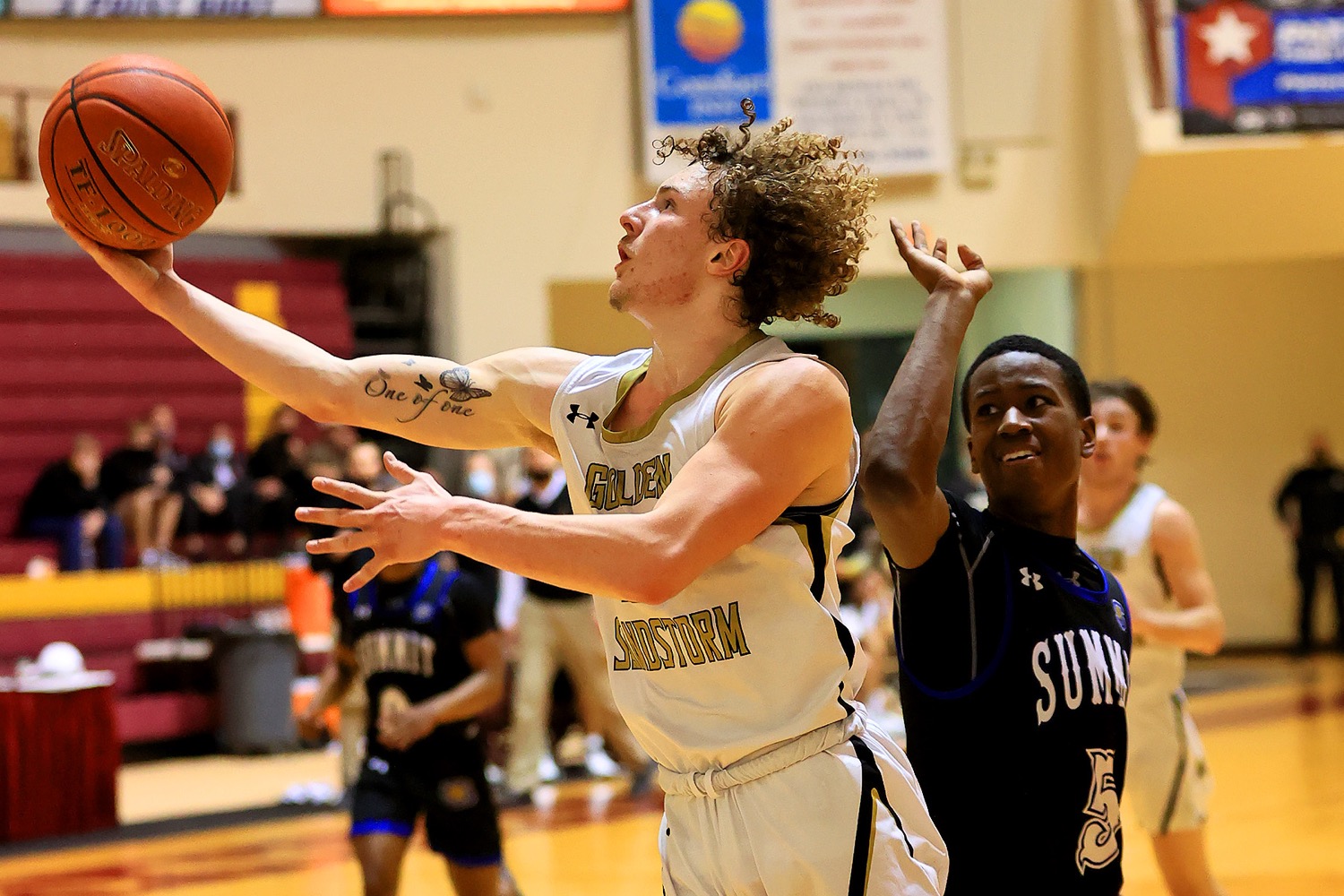 AHS started seizing control in the third quarter taking advantage of a massive size difference in the paint behind 6-foot-11 post, Cade Hornecker, and 6-foot-7 post, Damonze Woods. Both players kept Summit off the glass as the Sandies defense turned up the pressure eventually wearing down the Jaguars.

On the offensive end, the Sandies slowed down the pace picking and choosing clutch shots by Chris Dees and Hausen. After being bottled up in the first half, Hausen scored 12 of his 14 points all in the second half including a huge 3-pointer from the wing over defender David Terrell, putting AHS up 41-37 with 6:50 to play. From that moment forward Dees, Hornecker, Woods and Hausen helped AHS stretch the lead to as many as 11 in the closing minutes.

“We played possession by possession basketball, and eventually things started going our way,” Pillion said. “They had total control of the tempo in the first half, but we changed that behind Cade Hornecker’s second half. He was the difference. He protected the rim, and didn’t give them an easy look.”

Dees finished with a game-high 17 points. Hornecker added a double-double with 14 points and over 10 rebounds.

Stat of the night

After failing to go to the free-throw line in the first half, the Sandies knocked down 22-of-27 shots from the charity stripe in the final two quarters.