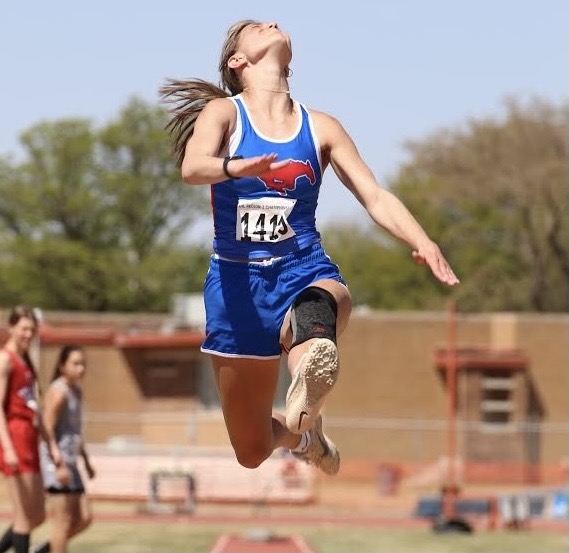 Claude’s Lanie Stapp will compete in the triple and long jump events during the UIL Class 1A state track and field championships Saturday at Mike A. Myers Stadium in Austin. [Johnna Reynolds/ Texas 1A Fan]

When Lanie Stapp steps foot on the hallowed grounds of Mike A. Myers Stadium Saturday in Austin to compete at the University Interscholastic League Class 1A state track meet she should feel right at home.

The Claude senior is making her third appearance in Austin having already won a long jump state championship as a sophomore, while placing sixth in the triple jump and 100 meter dash.

Stapp has established herself as one of the best in Class 1A, and one of the to jumpers across the Texas Panhandle. With a resume like Stapp has built, no doubt she’ll once again be considered a favorite when she defends her crown in the long jump, while also competing in the triple jump event.

“It’s still nerve racking when you compete at that stadium,” Stapp said. “When you’re there all eyes are on you, and you don’t want to let anyone down. But getting to state every year was a goal. Going for first is always what I strive for, but I know that isn’t always going to happen. When I can always count on comes to giving it my all and getting where I need to be.”

Stapp earned her way back to Austin with a fantastic performance at last weekends Region I-1A meet in Levelland. Stapp took second in the long jump, then popped off a season-best 36-7 3/4 to claim gold in the triple jump. It was an extremely rewarding feeling for the Lubbock Christian University signee.

Like the rest of the athletes competing this weekend, Stapp missed out on last year’s state track meet when the world shut down to the coronavirus pandemic. After two straight years of making a name for herself at state, Stapp had her dream of particapting once again in Austin ripped away, tearing away hopeful goals.

“Last year was very disappointing,” Stapp said, “We’d put a lot of work into the season, and I had myself in the zone. Sydney Ritter from Groom, who always pushed me, had graduated, so I had to work even harder then it got taken away from all of us. This time it’s taken a lot of extra work, and I didn’t want to fall behind. I want to keep working hard and put myself in a good position.” 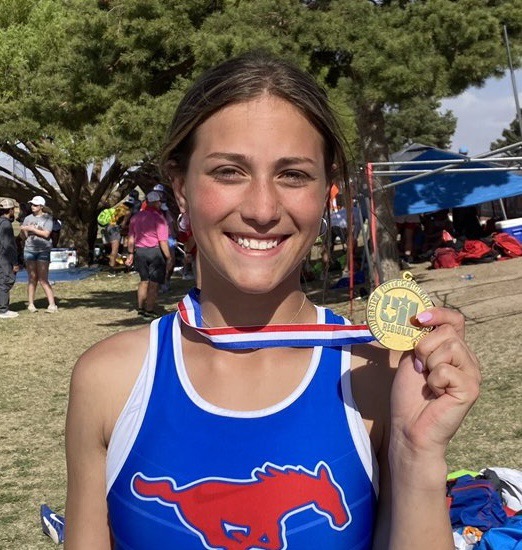 Stapp took home a gold and silver medal at the Region I-1A track and field meet in Levelland. [Provided photo]

Claude’s first-year head track coach, and head basketball coach, Tori Williams, works with Stapp on a daily basis, developing close bond with her pupil. Williams, a Claude graduate, had heard of Stapp when she took the position last summer, but didn’t realize exactly what type of athlete she was getting.

“Lanie and I grew a ton together threw basketball and it’s been the same through track,” said Williams, who also led the Lady Stangs basketball team to the Region I-1A finals in March. “I’ve watched her grow into a leader, and it has been fun to see her in her element. She was tremendous at basketball but track is definitely her sport. She always amazes me.”

Williams says Stapp impresses her everyday thanks to her tremendous growth from the first of the school year.

“To me her leadership has grown the most,” Williams said. “We are full of underclassmen, and she led us on the basketball court, and she anchored our sprint relay team. She gives them the confidence, and holds everyone accountable. Watching her grow that in regard has been really good.”

Stapp is aware this will be her final time to compete in a Claude uniform. So making the most of her final opportunity is something she isn’t taking for granted.

“My career has had its challenges,” Stapp said.

“I’ve had a lot of advice to help me get through it. But I’ve always believed in myself, and I’ve never gotten down. I’m definitely going down there to win two gold medals. That’s my expectation, and I know if I compete and work hard I can get it done.”

Stapp is set to compete in the Class 1A long jump at 9 a.m. Saturday, followed by the triple jump at 1 p.m.