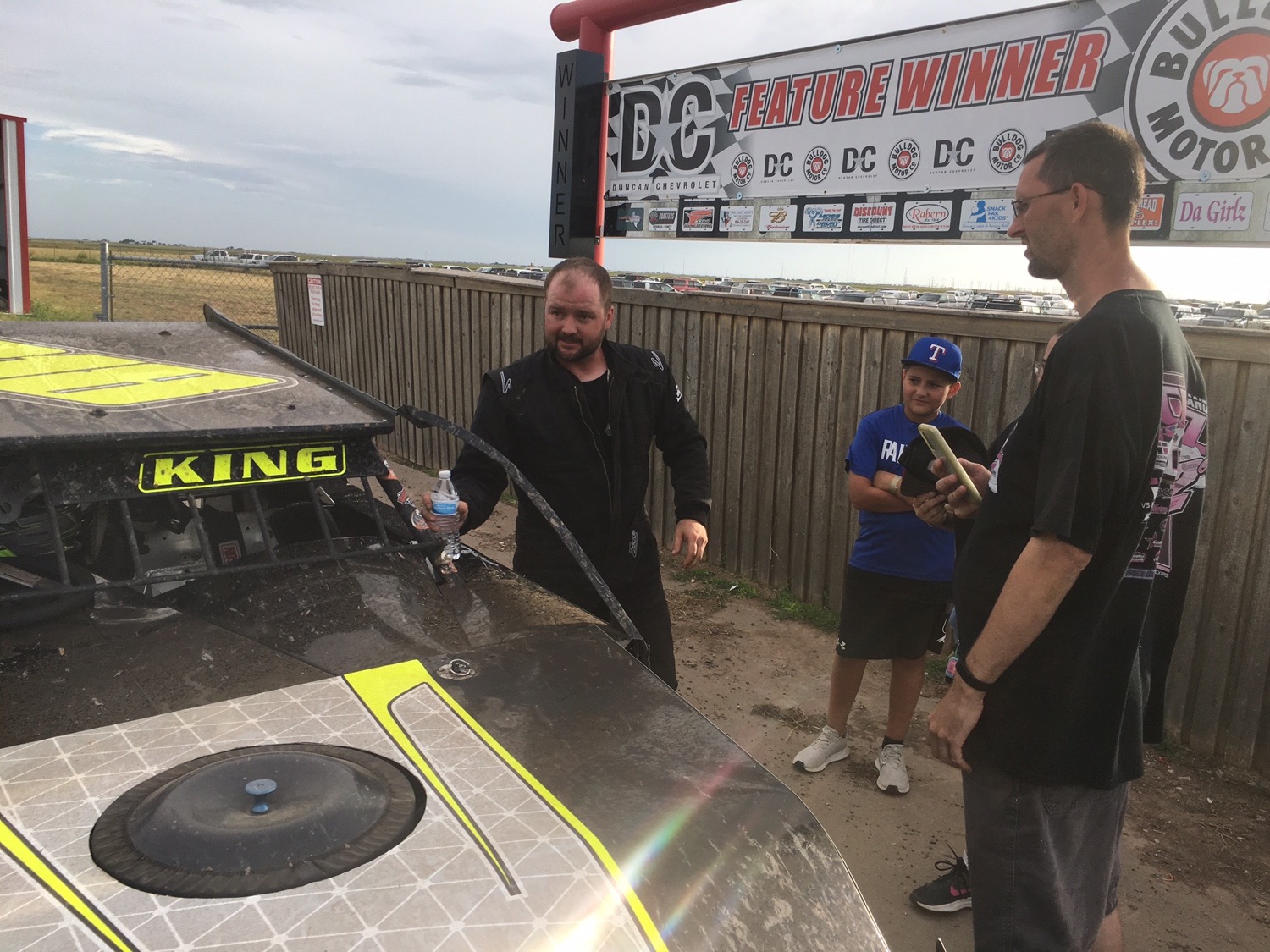 Amarillo’s Kalvin King (left) stands by his car after winning the Limited Modifieds event at Route 66 Speedway on Sunday.

But that didn’t mean there wasn’t some prime time action on the dirt.

Saturday night’s scheduled weekly show was postponed because of a thunderstorm that afternoon, washing out all events, including the featured Lyndon Moss Memorial sprint car event. That race and three other normally scheduled classes were moved to Sunday afternoon, the first time racing had taken place on Sunday in track history.

The main event, featuring several drivers from across the nation, didn’t disappoint after the delay. Most of the 30-lap event was a duel between Danny Wood of Norman, Okla. and Jett Hays for Fort Worth.

Wood, 63, who is a three-time American Sprint Car Series season runner-up, was up front almost the entire way. But he was pushed during the second half of the race by Hays, an upstart 20-year old.

After a few cautions midway through the race, Wood appeared to have a comfortable lead, but Hays was edging closer as the race neared the checkered flag. With two laps to go, the race for the lead became especially heated, as Hays appeared to take a hairbreadth lead on turn three, but Wood edged ahead and held on for the win.

In terms of interest to local fans, though, the most thrilling race closed the day in a battle between two Amarillo drivers. Brittany Hogan Venable looked primed to break through against the boys club in the 20-lap Limited Late Models event.

Hogan Venable led most of the event and was on the verge of becoming one of the first female drivers in recent memory to pull out a win at the track. But season points leader Trey Hale kept inching closer, and with just over three laps left, showed why he’s the leader and defending track series champion, passing Venable and holding on the rest of the way for the victory.

Hale entered the day with a 197-point lead atop the standings, and his victory all but assured that he will repeat as series champion this season.

In the Street Stocks event, Amarillo’s Jimmy Johnson held off another patented charge by fellow local Robert Layton to claim his second win of the season. Layton, though, entered the day with a 138-point lead in the season series and will likely join Hale as a season series points champion at the conclusion of next Saturday’s championship night.

In the other main event, Amarillo’s Kalvin King, the defending Limited Modifieds series champion, won a crash-plagued race to pull out a victory. King stayed in second place in the season standings behind Slaton’s Cory Williams.