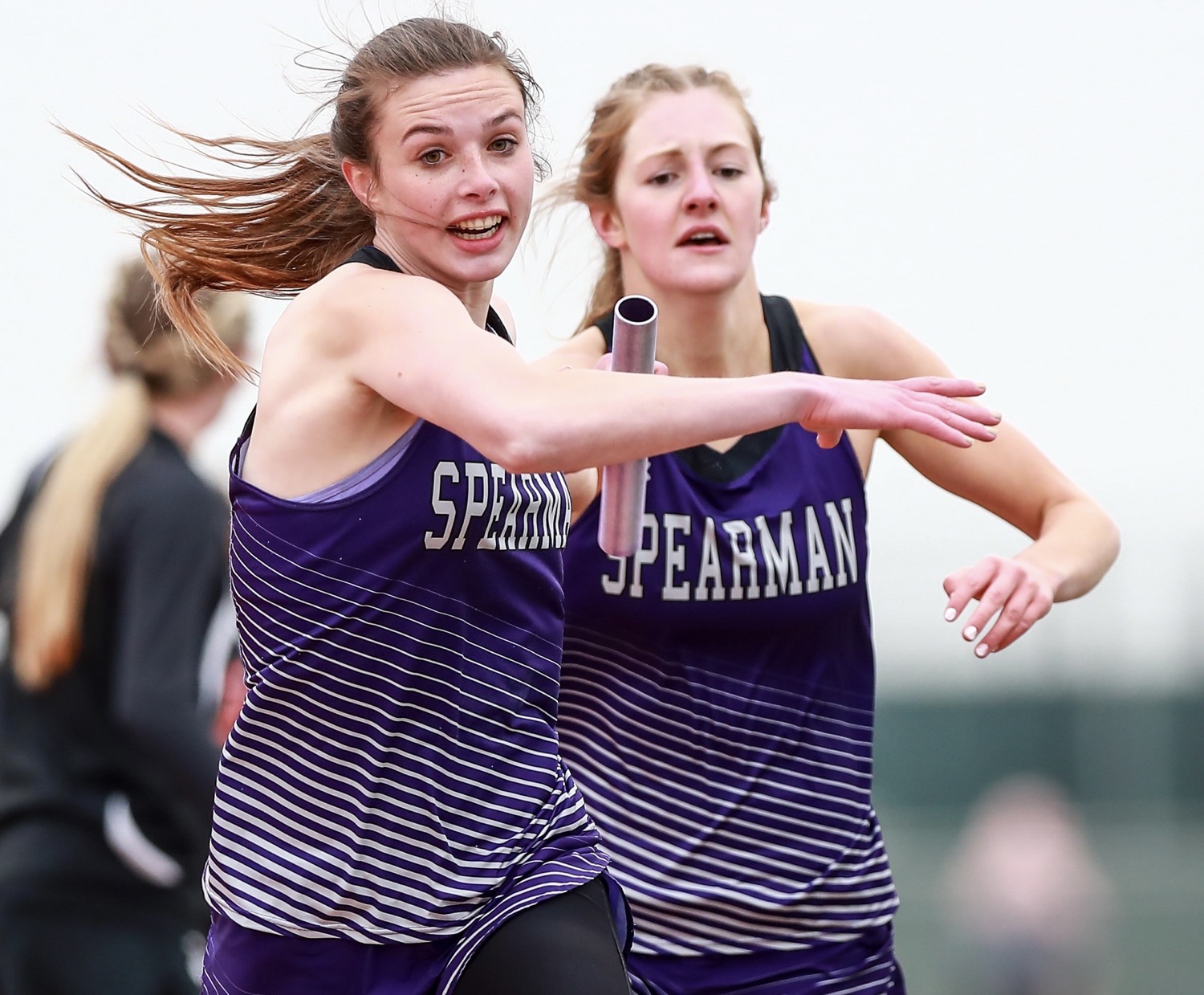 Spearman’s Mia Pipkin, left, takes the handoff from Maggie Davis during the 1600 meter relay at the District 1-3A/ 2-3A Area Track Meet at Lubbock-Cooper on Wednesday. [John Moore/ Press Pass Sports]

Texas Panhandle athletes didn’t let the cold and damp weather have any effects on outstanding performances at the District 1-3A/ 2-3A Area Track and Field Meet on Pirates Field at First United Park at Lubbock-Cooper on Wednesday.

The Spearman girls team walked away with the area championship thanks to a total of 112 points, holding off Bushland, which racked up 103 points.

The Lynxettes were able to clinch their championship on the days final race. Spearman’s 1600 meter relay team of Braylen Lusby, Candice Mackey, Maggie Davis and Candice Macke sped to the finish line with a time of 4:05.29 for the gold medal.

Lusby was the showcase on the afternoon for Spearman. Not only did Lusby help the mile relay qualify for the Region I-3A Track and Field Meet set for next Friday and Saturday at Abilene Christian University, but the freshman also won the 300 meter hurdles clocking a 46.35, and placed second in the 800 with a time of 2:23.03. Teammate Mia Pipkin followed Lusby’s performance taking gold in the 800 meter run (2:22.68), as well as earning silver in the 400 meter race thanks to a 1:00.93.

The Bushland Lady Falcons sprint relay squad of — Haylee Sessions, Corley Carr, Caitlyn Culwell and Jessie Fowler — ran a season-best 49.86 for a gold medal and a spot at regional. Fowler even nabbed a silver behind winner Samantha Krehbiel of Canadian (12.60) in the 100 meter dash sprinting a 12.66.

Fowler’s teammate Jillian Howell stepped off the softball diamond and into the shot put ring to toss a Texas Panhandle season-best 40-feet-6 inches. 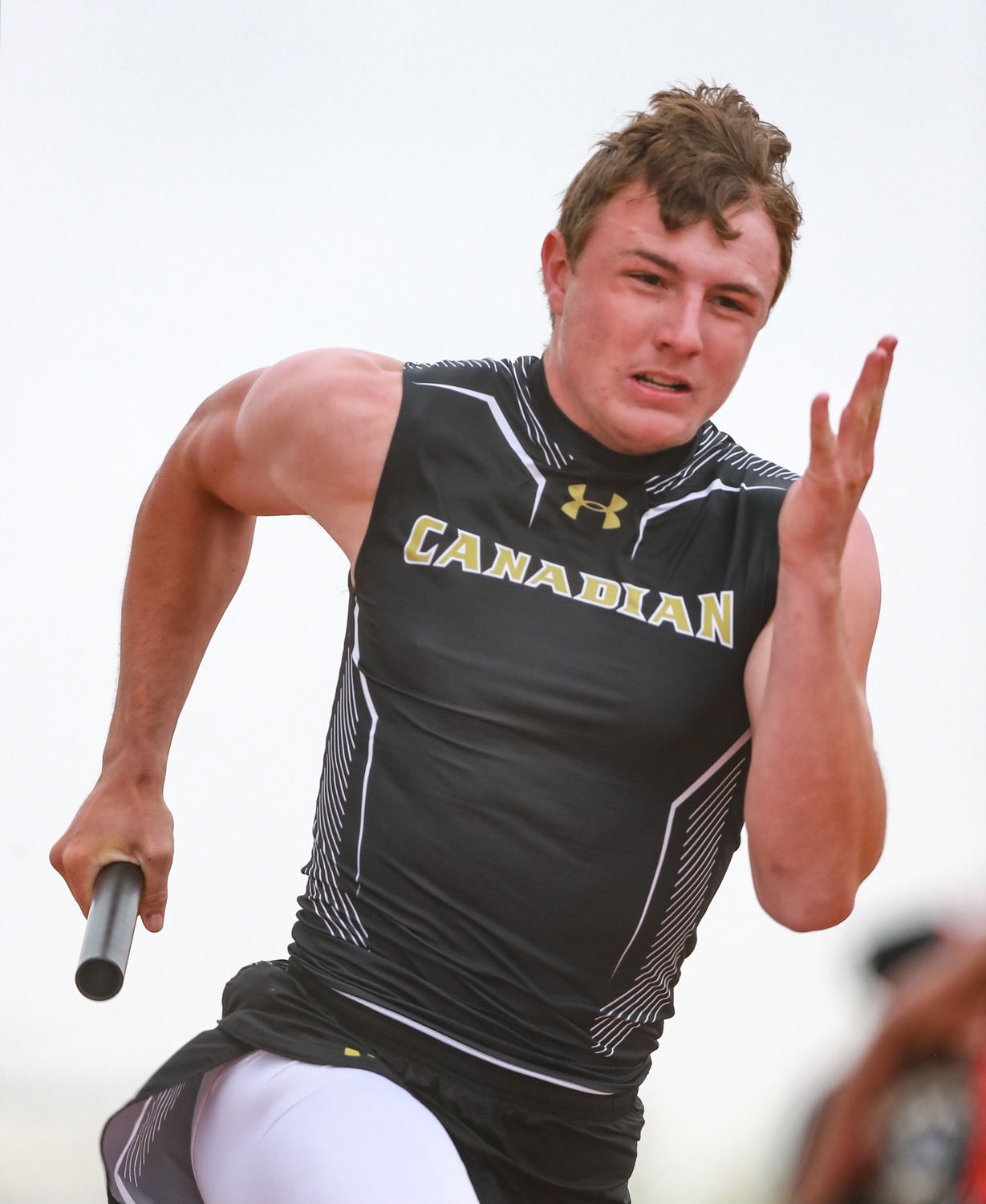 Canadian’s Hayze Hufstedler sprints around the curve as the opening leg of the 1600 meter relay at the District 1-3A/ 2-3A Area Track Meet at Lubbock-Cooper on Wednesday. [John Moore/ Press Pass Sports]

On the boys side Slaton took home the area title with 97 points, followed by Shallowater (87 points) and Canadian coming in third tallying 78 points.

As expected the Canadian 1600 mile relay tacked on to its incredible season. The team of Hayze Hufstedler, Joshua Culwell, Angel Garcia and Rylun Clark, smoked the rest of the field with a gold medal time of 3:30.01 to qualify for regional. Clark nor Garcia was done there. Clark is advanced in the 800 meter run clocking a 1:59.96, and Garcia is moving on in the 400 meter run with a time of 52.46.

Though Canadian ran well, no one showcased speed like Spearman junior Brenen Thompson. The Division I football prospect with 37 offers blazed to the gold medal stand thanks to a 10.56 in the 100, then followed that performance with a 21.57 in the 200 meter race. Thompson even helped his 400 meter relay take second with a time of 43.86.

River Road’s Crawford Kiser went double gold in the long distance events. The Wildcat senior set new personal-records pacing a 10:02.96 in the 3200 meter run, and a 4:35.69 in the mile.