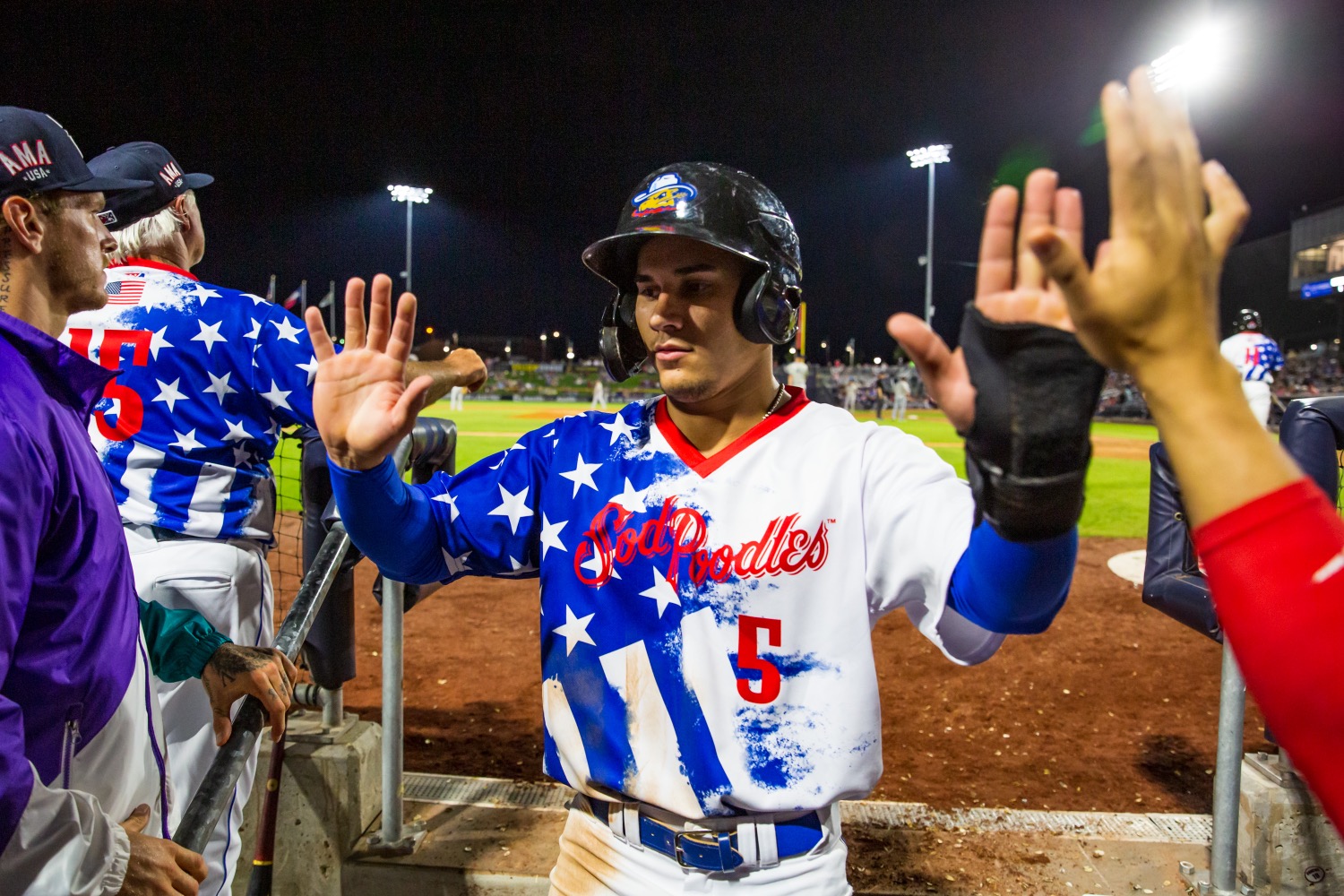 It was yet another series split at Hodgetown last week for the Amarillo Sod Poodles, but no one could say they weren’t well-armed against the Wichita Wind Surge.

The Sod Poodles hosted Double A Central North Division leader Wichita over six games and came out of it with a split, missing a chance on winning the series with a 3-2 loss on Sunday before a franchise record crowd of 7,477 on the Fourth of July. That only happened because the Surge scored three unearned runs in the sixth inning off Soddies starter Matt Tabor, who had a stellar week on the hill.

“The pitching was outstanding all series,” Sod Poodles manager Shawn Roof said. “They did a really, really good job. You saw some of the starters and they just came out from high (Class) A and they got their feet wet. You could see them get more confident and into the groove and it’s exciting to see them keep it rolling.”

Tabor got things started on Tuesday’s series opener, as he went seven innings without walking a batter and gave up only two hits in a 4-3 win. It was his first Class AA victory.

Ryan Weiss, who began the season as a starter, threw the last two innings and survived giving up a solo home run to Jermaine Palacios in the top of the ninth to earn his first save of the season.

Monday, Weiss was promoted by the parent club Arizona Diamondbacks to Triple A Reno.

Sunday, Tabor appeared to be cruising to his second win of the series. He threw five shutout innings before the Soddies (24-30) got on the board in the bottom of the fifth on an RBI single by Tra Holmes off Jason Garcia, who Tabor beat Tuesday.But in the top of the sixth, luck turned against Tabor. With one out, he gave up a single to Trey Cabbage and walked Roy Morales, both of whom moved up a base on Wilbis Santiago’s groundout.

Tabor looked like he was going to escape the inning on Leobaldo Cabrera’s grounder to third, but Buddy Kennedy threw wildly past first base, allowing both runners to score. Peter Mooney then tripled to left on an 0-2 pitch to score Cabrera and Tabor was pulled.

“The biggest thing is Tabor is continuing to work,” Roof said. “He works his tail off. He sometimes gets a little too quick on the mound which doesn’t allow him to command the zone. He did a lot better job staying within himself and throwing strikes in the zone with three quality pitches.”

While Tabor may have had the best week on the staff, the single most dominant mound performance was by Jarvis. He went seven innings for the win and didn’t walk anybody, giving up five hits and only a solo homer to Spencer Steer in the top of the sixth.

It was a perfect atmosphere in front of a Hodgetown crowd of 7,103 on the second of three straight nights featuring postgame fireworks for Jarvis to pick up his first Sod Poodles victory.“Having the wind of the fans in your sails going deep into a ball game it’s easy to get tired, but when you’ve got screaming fans in the stands it keeps you going,” Jarvis said. “Talking to the guys you kind of build (Hodgetown’s reputation as a hitters park) into your expectations when you pitch in a park like this, especially with the wind blowing out so I wasn’t too mad (over Steer’s homer). You can’t let that effect you. Coming toward the end of my outing I knew I could empty the tank and give it all I had.”

Paradoxically, despite the hot pitching streak, the Soddies had given up homers in 24 straight games through the weekend, a streak which ended Sunday.

Sod Poodles outfielder Alek Thomas is headed to an all-star game next weekend for the second time, as he will be part of the National League squad at the SiriusXM All-Star Futures Game at Coors Field in Denver next Sunday, two days before the Major League All-Star game in the same location.

Thomas, who’s rated the No. 4 prospect in the Arizona Diamondbacks organization, is batting .277 with five homers and 23 RBIs. The contest features the top prospects in the minor leagues competing as part of All-Star Sunday, and Thomas also played in the game in 2019.

“It’s an honor to play in the game,” Thomas said. “One of our managers in Triple A is going there so that’s going to be cool interacting with him. It was really fun the first time. I got to see some old teammates that I had in the past and see everyone hit BP (batting practice). I think BP’s probably the most fun thing to do, just hitting at a big league park and watching the ball fly.”

While Thomas might seem as if he’s on a fast track to Phoenix, he doesn’t necessarily fell this game gives him a greater springboard in that direction.

“I don’t think it does that,” Thomas said. “I think it just gives me an experience to be around guys who are really talented and see good pitching. There’s a lot of big league coaches in there.”

Perhaps in anticipation of not having Thomas due to the Futures game, the Sod Poodles had him sit out Sunday’s series finale.

Catcher Jose Herrera was called up by the Diamondbacks to Triple A Reno last Thursday. That same day catcher Jonah Girand was called up to the Sod Poodles active roster, two days after another catcher, Renae Martinez, was activated from the temporary inactive list.

Martinez made an impact Saturday by starting the scoring for the Sod Poodles with a two-run homer.

That same day, right-handed reliever Keegan Curtis made his debut with the Diamondbacks organization for the Sod Poodles. Curtis was acquired from the New York Yankees organization Tuesday in exchange for outfielder Tim Locastro, and he pitched a 1-2-3 ninth inning to earn the save in his Sod Poodles debut. 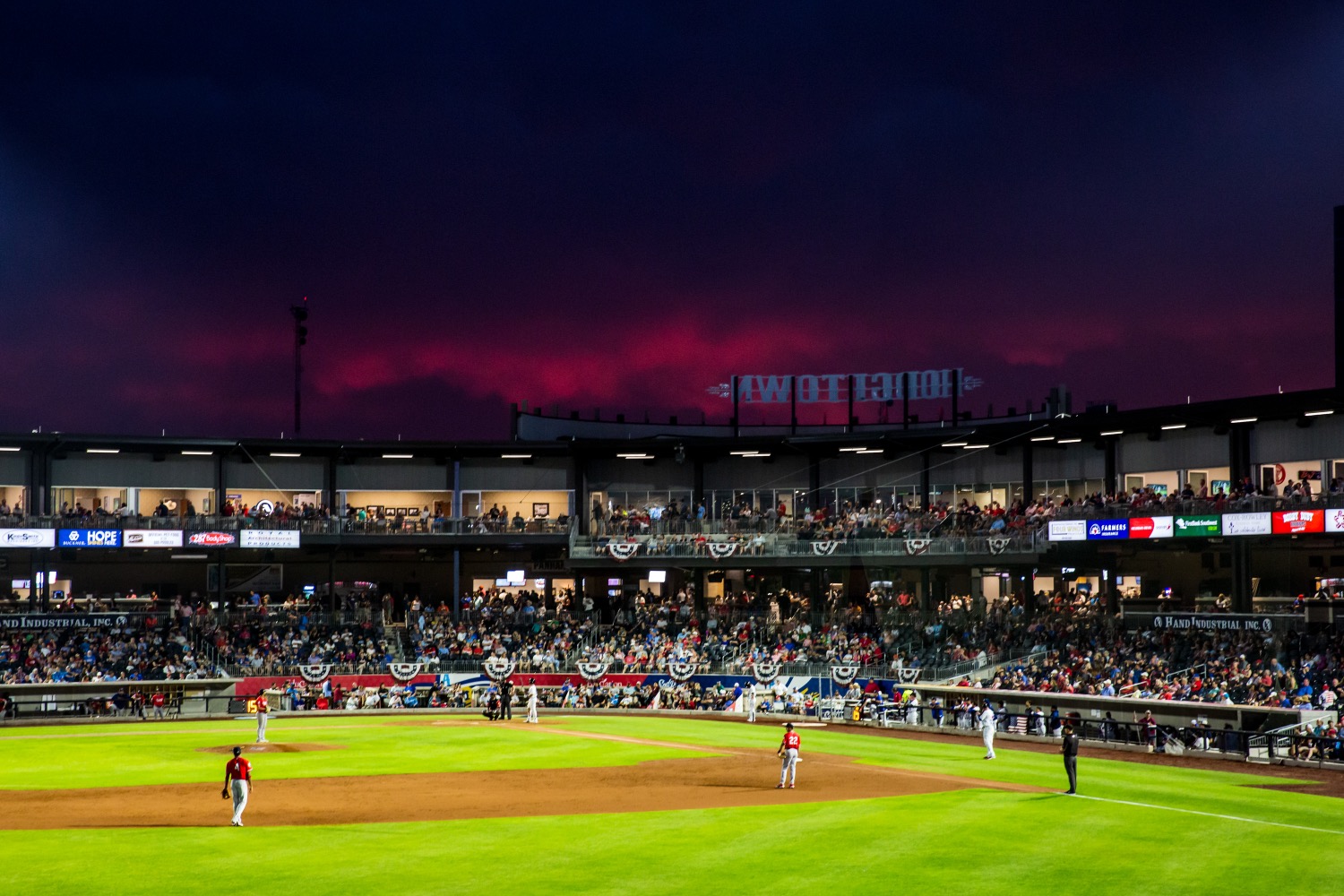 Thanks to the Fourth of July weekend, the Sod Poodles had their most successful series of the season in the turnstiles at Hodgetown, as they drew 36,495 fans last week. That gives them a total of 137,568 spectators for the season.