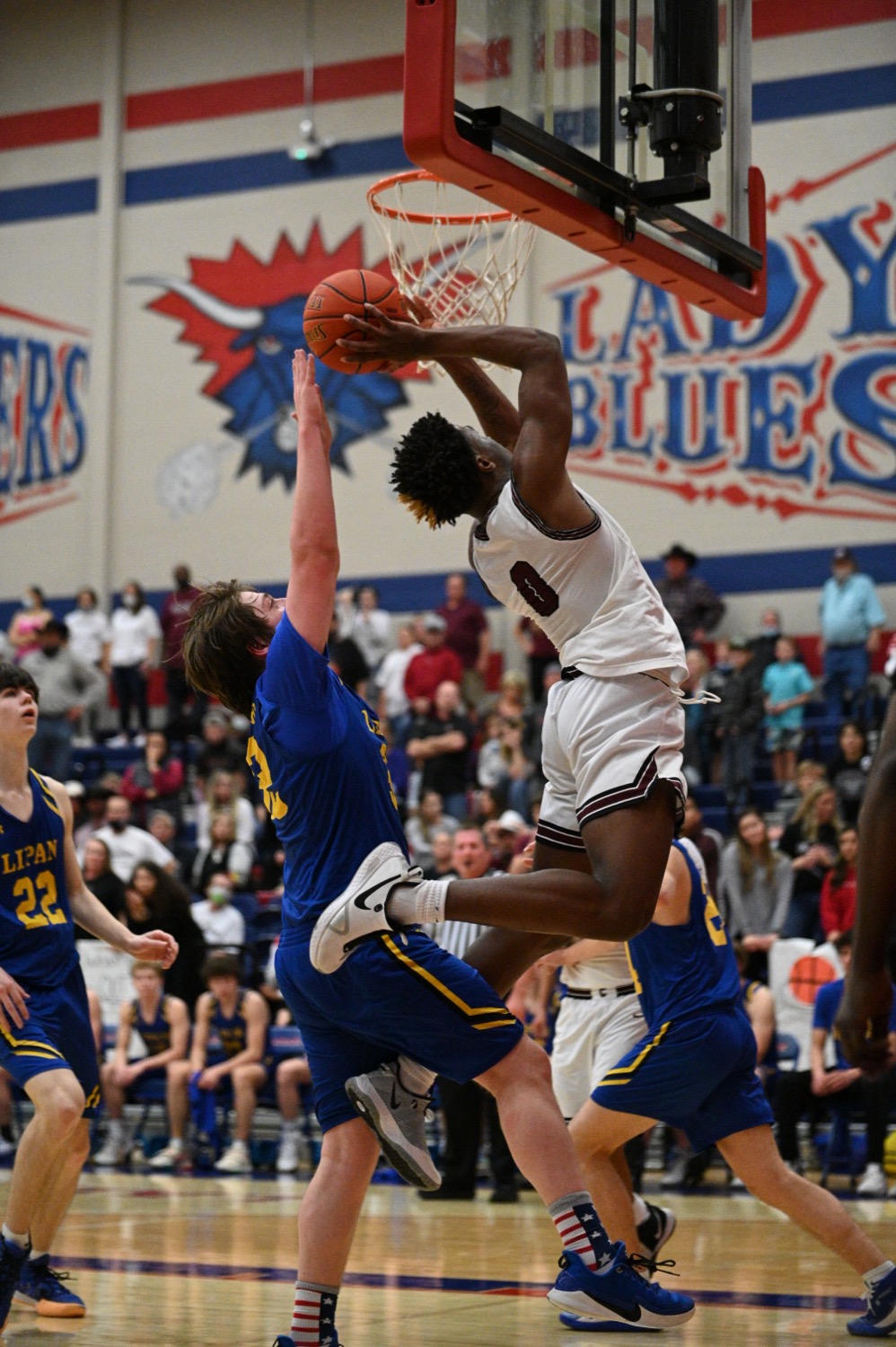 Clarendon’s Jmaury Davis goes over a Lipan defender for a score during the Broncos Class 2A state semifinal matchup at Graham High School on Tuesday afternoon. [Josh Harwell/ For Press Pass Sports]

Graham— A three and a half hour bus trip nor an early 13-point deficit didn’t phase No. 2 Clarendon Broncos, as they ran past Lipan in an impressive fashion 67-48, earning during a Class 2A state semifinal Tuesday afternoon at Graham High School.

The Broncos (25-4 overall) return back to the University Interscholastic League 2A state championship for the fourth time in school history (1970, 2011, 2017) where they’ll now meet up with Grapeland (29-1) In the state title game at 10 a.m. Saturday in San Antonio’s Alamodome.

“I’m so proud of our guys,” Clarendon first-year head coach Boston Hudson said. “This means a lot to me. No one knows how hard these guys work everyday. It was also emotional to me because my parents were here to see this.”

Grapeland defeated Schulenburg in the other semifinal, 74-60.

It didn’t look as if Clarendon was going to be doing celebrating early against Lipan (24-5). The Indians jumped all over the Broncos, storming out to a commanding 13-0 lead in the first four minutes of the contest.

But the momentum quickly turned on a pair of back-to-back mid-range jumpers from Jmaury Davis as Clarendon knocked the deficit down to 17-8 by the end of the opening stanza. The second quarter is where the tide completely turned, and the Broncos picked up a torrid pace Lipan had no answer for. Behind Davis, Lamarcus Penigar and Donovan Thompson, Clarendon stole the momentum and the lead by halftime outscoring the Indians 21-4 in the second alone, taking a 26-21 advantage into the break.

“We knew we just needed to execute,” said Davis, who scored 12 points in the first half. “We knew we needed to turn our defense into offense, and get out in transition.” 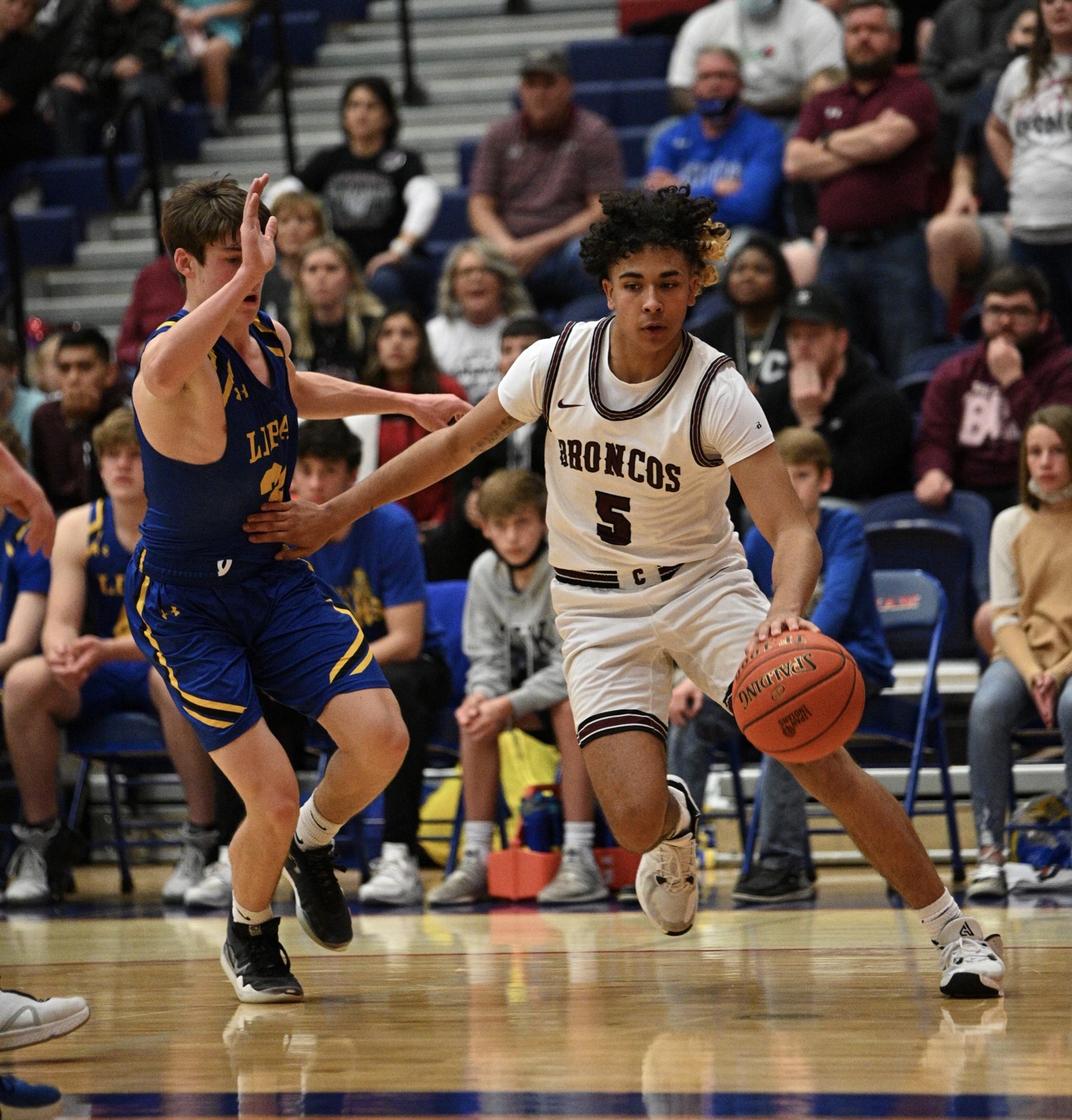 The third quarter was even more of an offensive explosion. Clarendon went on a 16-5 run to open a 42-26 lead midway into the third quarter on the way to a commanding 47-28 lead. In the fourth, Davis put the stamp on the emotional victory for Clarendon with two back-to-back powerful slam dunks in transition.

“Give credit to Lipan,” Hudson said. “They are a very disciplined, sound basketball team I have a lot of respect for. They have great shooters, so we wanted to pressure them. I felt we did that, we continued to put pressure on them, and wore them out during the game. I really felt good after the third because I knew they had to pressure us. We’re a tough team to pressure and it showed with our quickness.”

Thompson finished with a game-high 20 points, followed by Penigar’s 19, and Davis’ 18 points.

Lipan was led by Trip Phillips, who poured in 14.