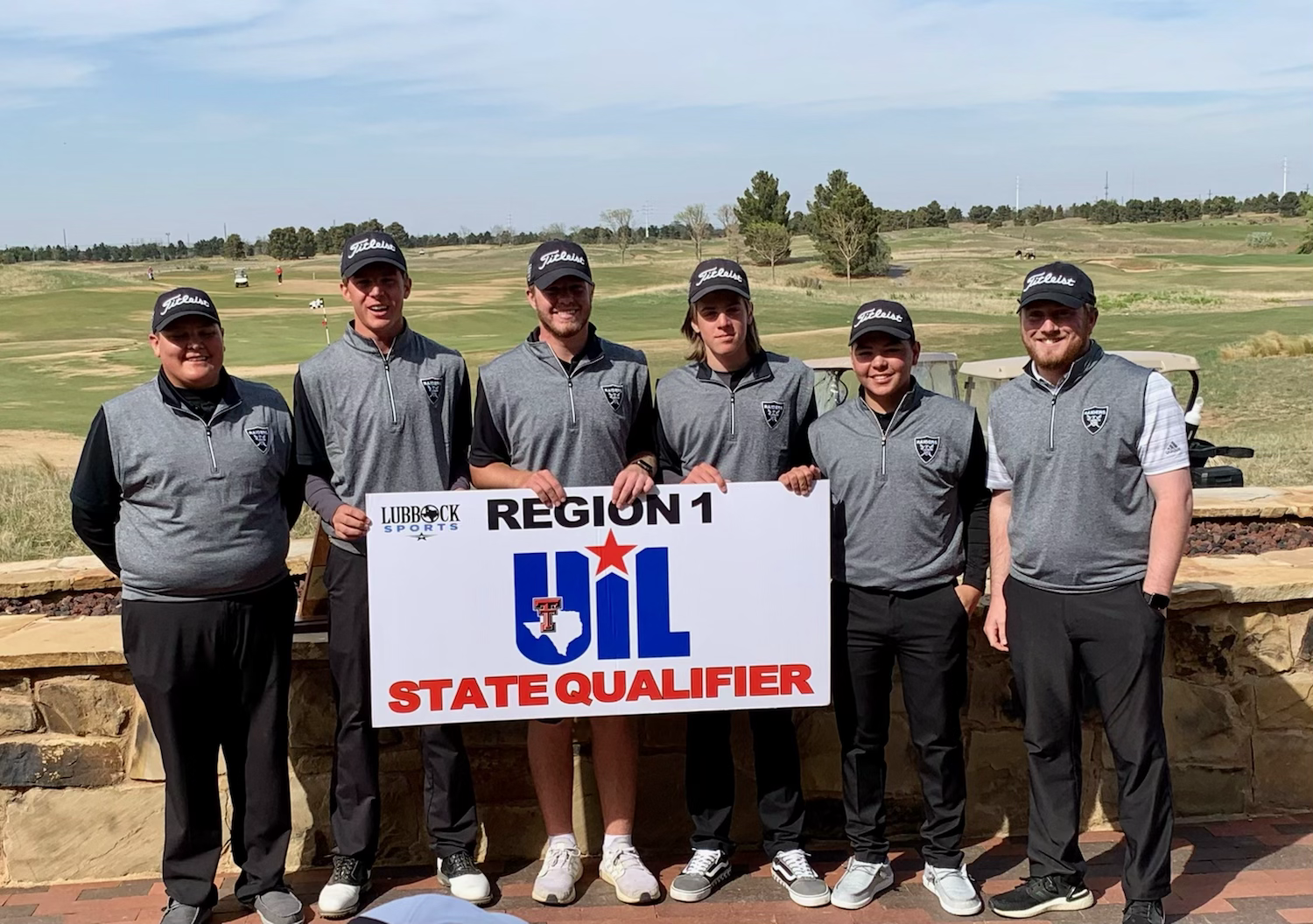 Randall did just enough to hold off district rival Tascosa and claim the third and final team spot to advance to the University Interscholastic League Class 5A state tournament.

The Raiders played gutsy golf when it counted to post a 36-hole total of 320-321— 641 to grab that final spot during the Region I-5A boys golf tournament at the difficult Rawls Course in Lubbock.

Randall’s Caden Conrad gave the Raiders the push they needed over the past two days. Conrad fired a 77 during Wednesday’s first round. On Thursday, Conrad kept that number in the 70’s, posting a 79 to finish the tournament with a 156. Wyatt Provence followed with two solid rounds. The sophomore, and District 3-5A individual champion, tallied a 78-82— 160, as his brother Stetson, shot 79-82— 161. 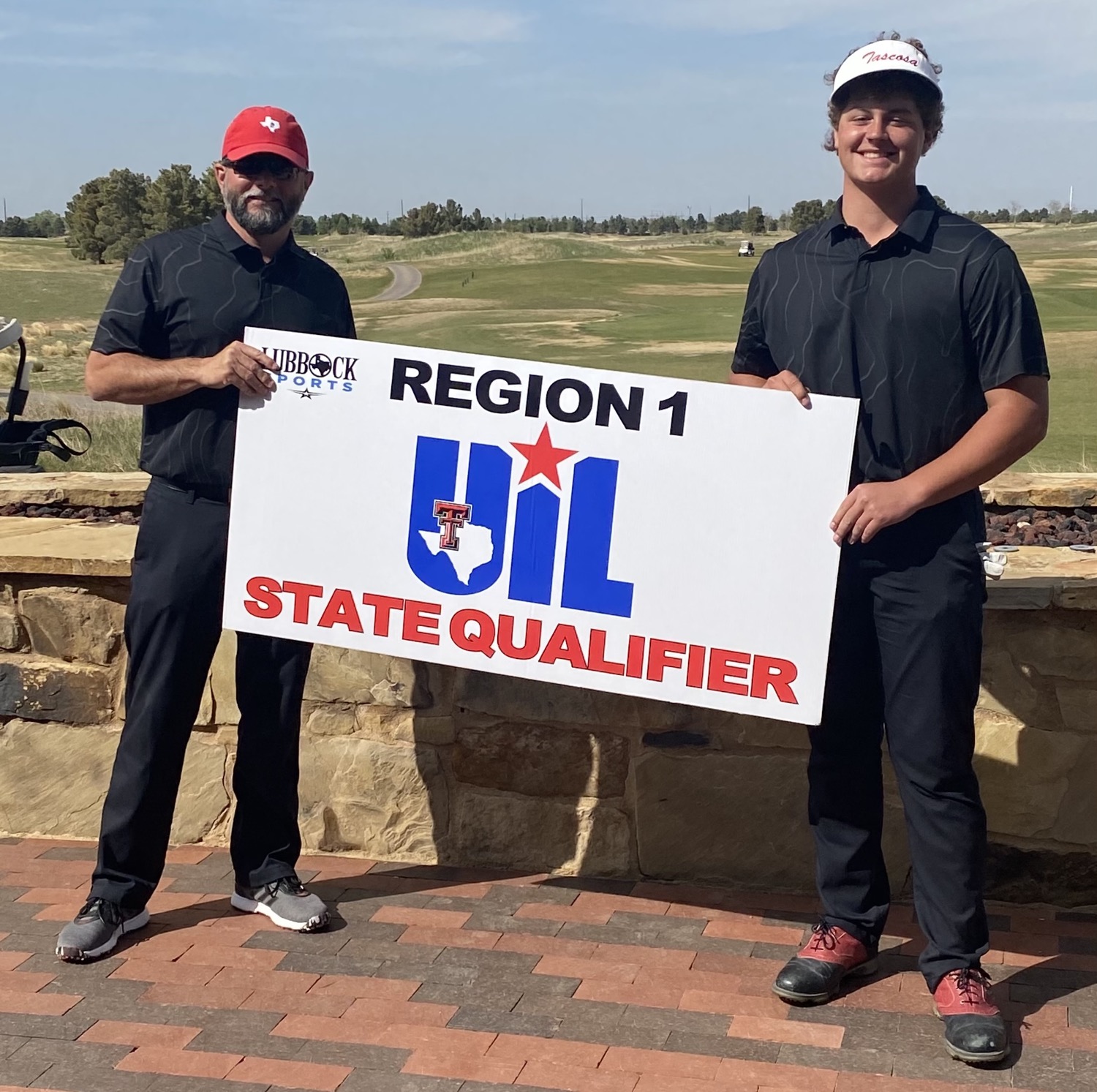 Tascosa’s Baron Buse, right, with his head coach Trey Scales, celebrate after Buse advanced to state as an individual during the Region I-5A golf tournament at the Rawls Golf Course in Lubbock on Thursday. [Provided photo]

Despite falling short in the team standings Tascosa’s Baron Buse qualified to state as an individual. Buse, who went 79-75— 154 over the two days, made a par with two birdies in a three-hole playoff to beat Grandury’s Ty Holbrook for the second medalist spot.

The UIL Class 5A state golf tournament is set for May 17-18 at the White Wing Golf Club in Georgetown. 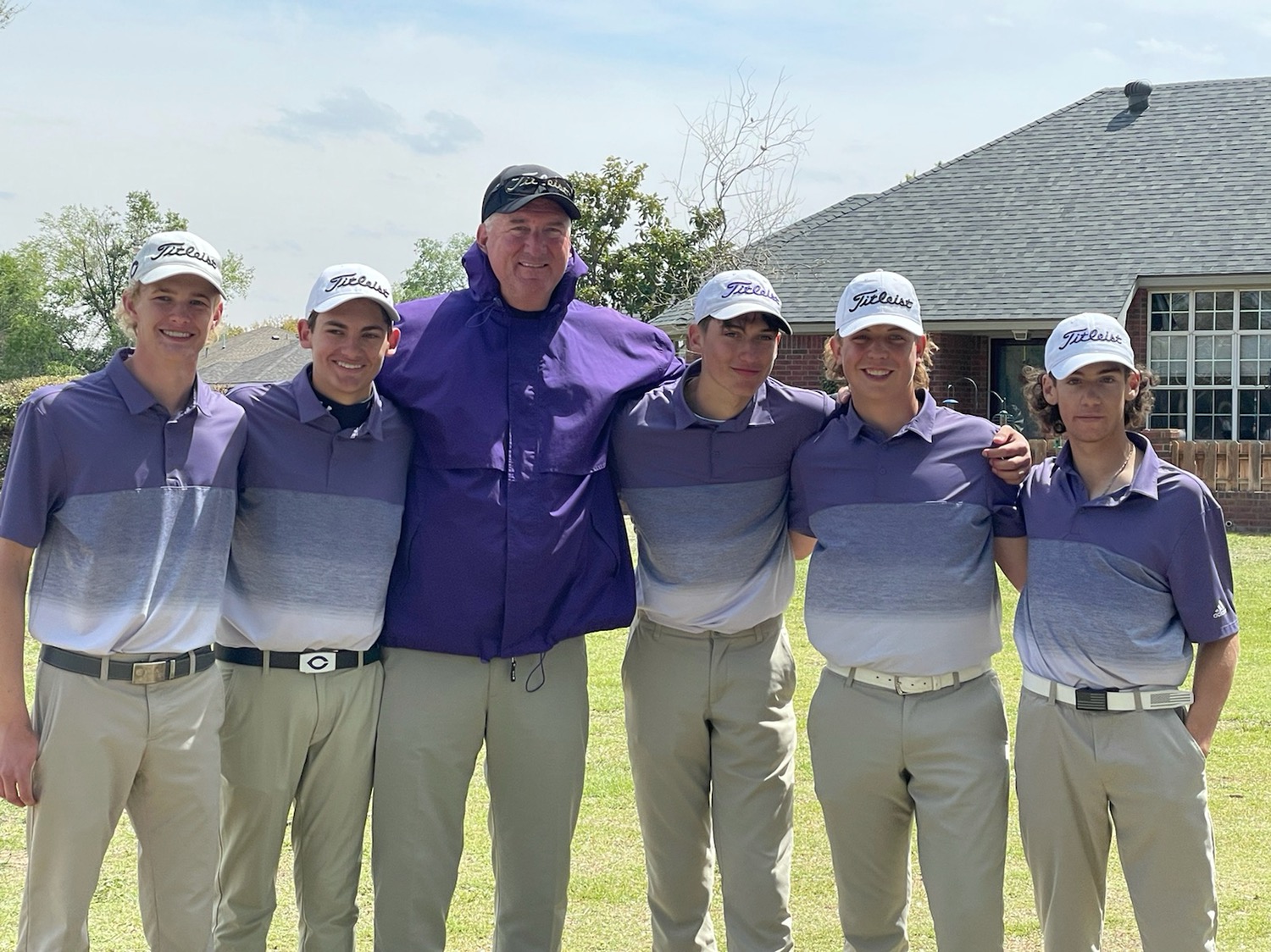 It was a stellar 36-holes for the Canyon golf team who claimed second place and punched a ticket to the UIL Class 5A state golf tournament.

The Eagles made that happen with tremendous play during the Region I-5A Golf Tournament at the Shadow Hills Golf Course in Lubbock on Wednesday and Thursday.

Canyon fired a season-best low round on the year of 299 during Wednesday’s first 18 holes, then followed that effort with another impressive score of 310 on Thursday for a 36-hole total of 609.

Argyle’s Gavin Lane was the standout on the individual side. Lane brought home the individual regional championship going low thanks to unbelievable scores of 67-63— 130.

The UIL Class 4A state tournament is set for May 17-18 at the Plum Creek Golf Course in Kyle. 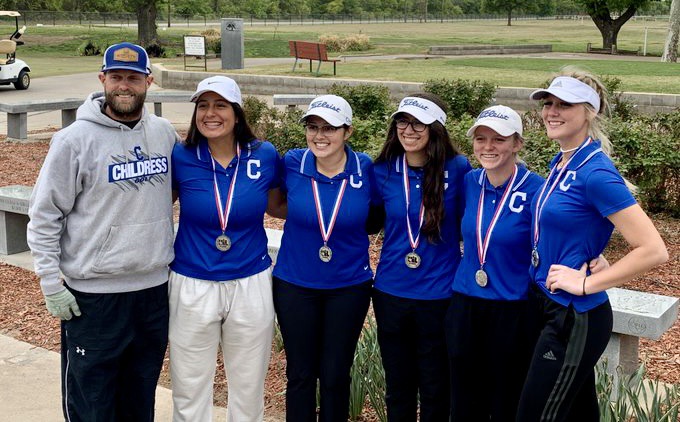 Childress jumped from third place to finish second as a team, and advance to state during the Region I-3A girls golf tournament at the Shady Oaks Golf Course in Baird on Wednesday and Thursday.

Childress trailed Odessa Compass by 8-strokes entering Thursday’s final round, however, the Lady Bobcats finished strong with a team score of 378 on the final 18 to hold off Compass by three shots. Childress finished the 36-hole tournament scoring a 385-378— 763 to earn the silver medal behind regional champion Wall (316-333— 649). 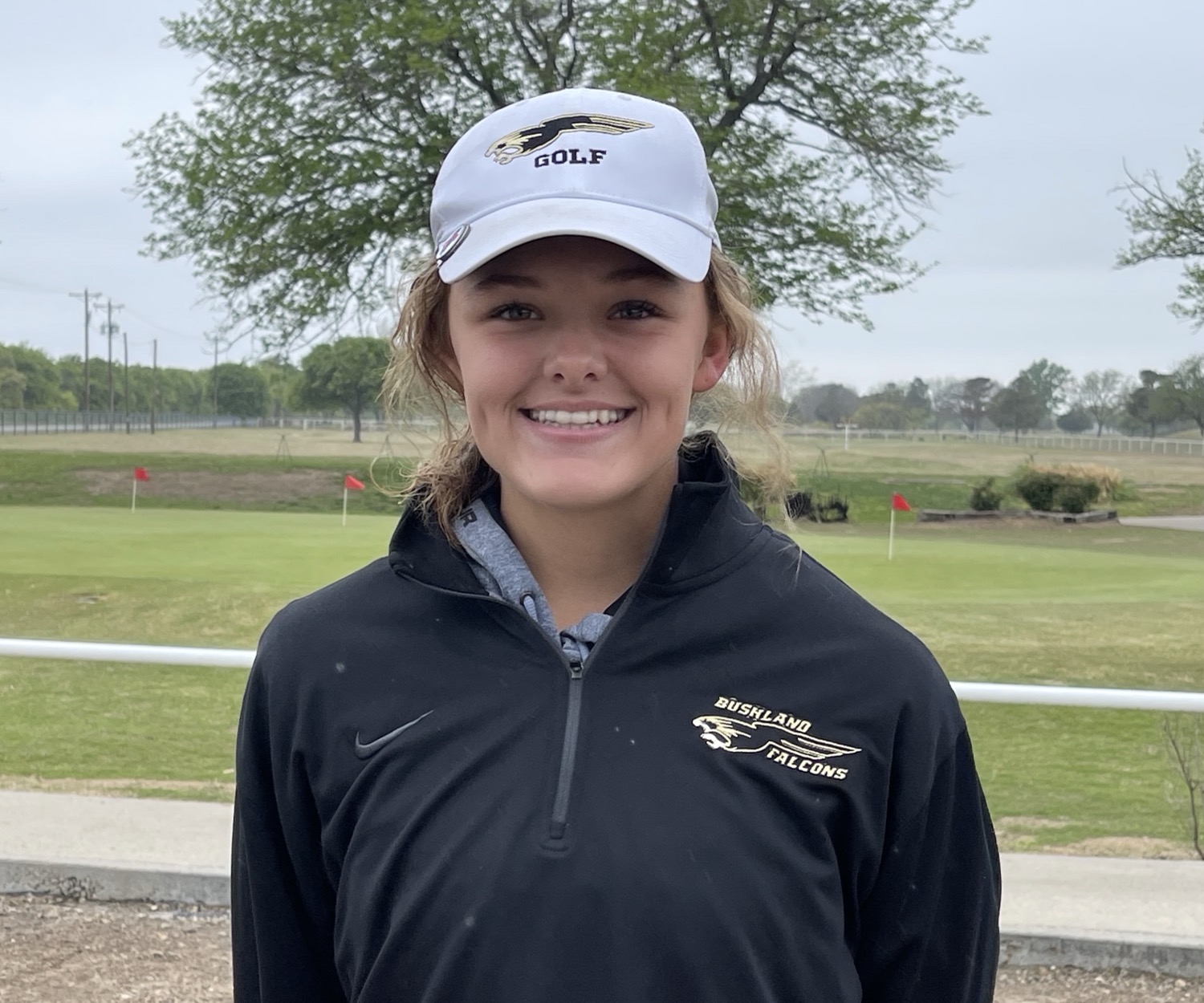 Bushland’s Logan Culpepper finished fifth overall to qualify for the UIL Class 3A state tournament during the Region I-3A golf tournament at the Shadow Oaks Golf Course in Baird on Thursday. [Provided photo]

Childress wasn’t the only Texas Panhandle representation making an impact at regional. After shooting an opening round 85 on Wednesday, Bushland’s Logan Culpepper came back strong Thursday firing a 4-over par, 76 that included three birdies.

Culpepper, a sophomore, finished in fifth place and will qualify for the state tournament. Joining Culpepper as an individual is Shallowater’s Kami Wood. Wood, the youngest daughter of former Randall football coach and now Shallowater football coach, Bryan, tallied a two-day score of 75-82— 157 for a bronze medal finish.

The UIL Class 3A state tournament is set for May 10-11 at the ShadowGlen Golf Club in Manor. 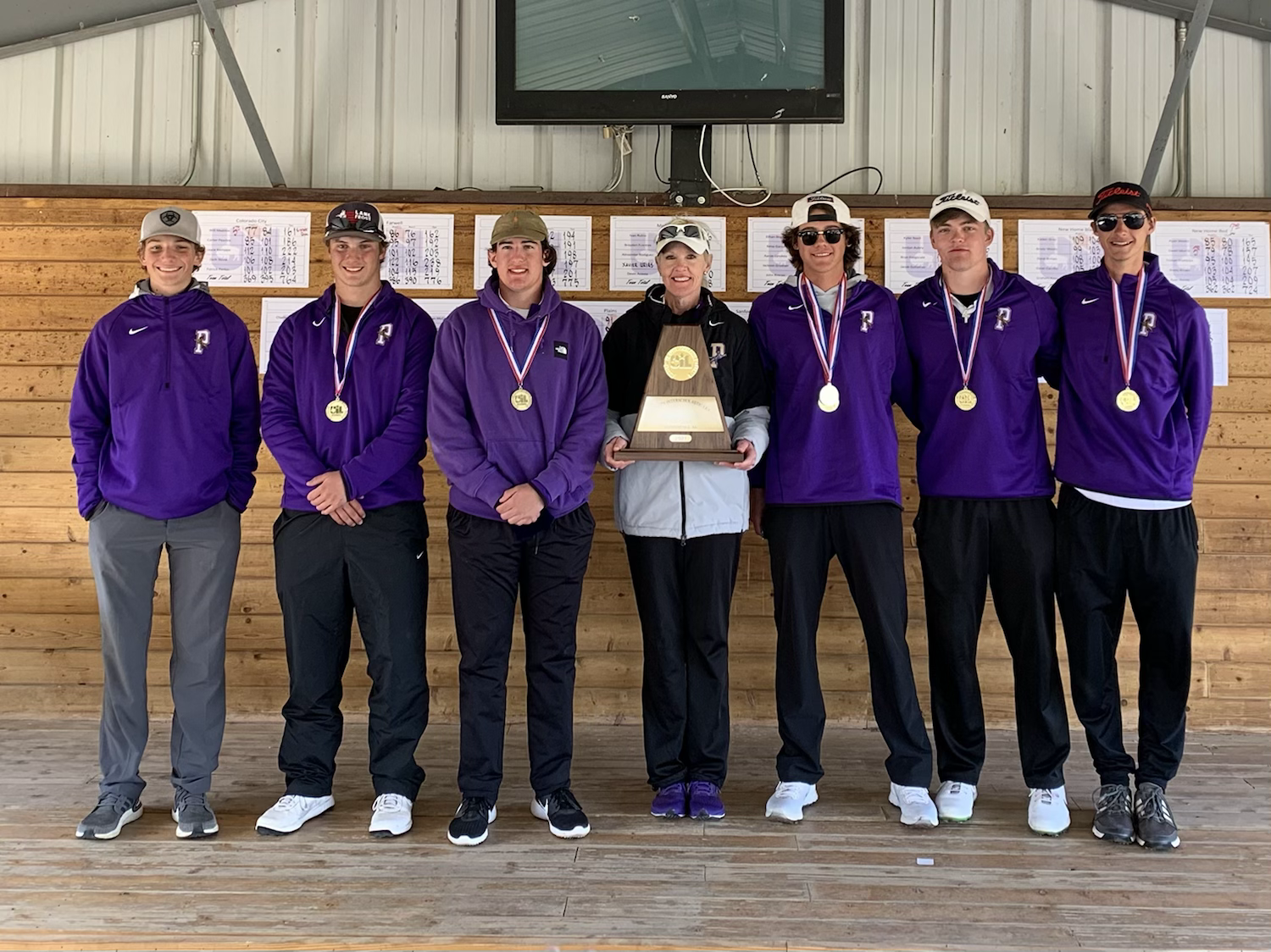 It was a stellar day for the Texas Panhandle teams at the Region I-2A boys golf tournament at the Palo Duro Creek Golf Course on Wednesday and Thursday.

The Panhandle Panthers led from start to finish over the 36-hole tourney to win the regional team championship, and advance to state posting a scores of 352-333— 685. Panhandle’s Logan McCoid nabbed a silver medal on the individual side leading the Panthers thanks to a 36-hole finish of 75-78— 153. McCoid placed second behind individual champion Warren Taylor of Tahoka (74-77— 151). Panhandle’s Levi McGill shaved strokes Thursday to finish tied 12th. After shooting a 92 on Wednesday, McGill went out and posted a 78 during his final round to total a 170.

The Vega Longhorns will join Panhandle at state. The traditionally strong program of Vega came from fourth place Wednesday to qualify for the third and final team spot. The Longhorns tallied a two-day score of 384-374— 758. Ryan Grawunder (80-82— 162) paced Vega to place sixth.

The UIL Class 2A state tournament is set for May 17-18 at the The Legends Golf Course in Kingsland.