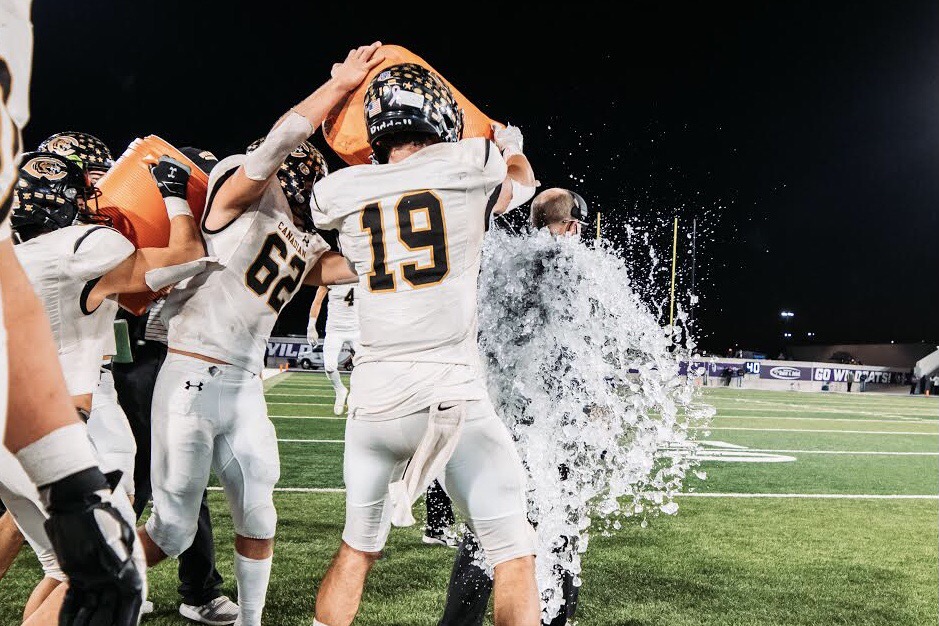 Canadian caught eyes across Texas Friday by making an emphatic statement that absolutely nothing is stopping them from playing for a Class 3A Division II state championship.

In one of the more anticipated state semifinals the Wildcats whipped rival Gunter in every phase of the contest on the way to a convincing 33-6 win at Anthony Field Wildcats Stadium in Abilene.

Canadian (14-1) will go on to compete for a fifth state championship in school history when they face Franklin at 3 p.m. Thursday at AT&T Stadium in Arlington, better known as the home of the Dallas Cowboys.

“It’s a great feeling,” said Canadian coach Chris Koetting, who improves to 142-18 overall in 11 seasons. “Gunter had handed us some tough losses in the past, but to get over that hump and get to the state championship is very special. I’m so proud of our team.”

The Tigers (13-2) had been a thorn in the paw of the Wildcats through these five straight semifinal meetings. Gunter had beaten Canadian three of the last four years, including a 27-20, thriller a year ago.

However, the Wildcats senior kept last years disappointment deep in their gut and had been salivating for another shot at Gunter. Canadian took advantage of this latest chapter of what’s turning in to a classic playoff rivalry, gaining the most lopsided win of this series.

“For a year I think everyone knew we’d have a chance to play Gunter again,” Canadian said. “We had the chance to redeem ourselves and we did that today.”

The opening moments of the game saw both teams turn it over. Canadian quarterback Joshua Culwell was picked off on the second play of the game. Not three plays later Gunter running back Ashton Bennett was popped after an 8-yard gain by Twister Kelton, fumbling the ball right into the hands of Wildcat defender George Abraham inside the Wildcats 25-yard line.

From that point forward Canadian’s offense settled, the defense clamped down in a monumental way, and the Wildcats went to work. Following the Bennett fumble, Culwell led his team swiftly down the field, finding Hufstedler on a back screen that went 27 yards to the Gunter 1-yard line, setting up a Hufstedler touchdown on the next play, giving Canadian a 7-0 lead. On Canadian’s next possession Culwell and the speedy offense kept Gunter on its toes with great balance. That led to Culwell finding a slip screen to Twister Kelton who had nothing but space in front of him as he went 17 yards to pay dirt for a 13-0 Wildcats advantage. 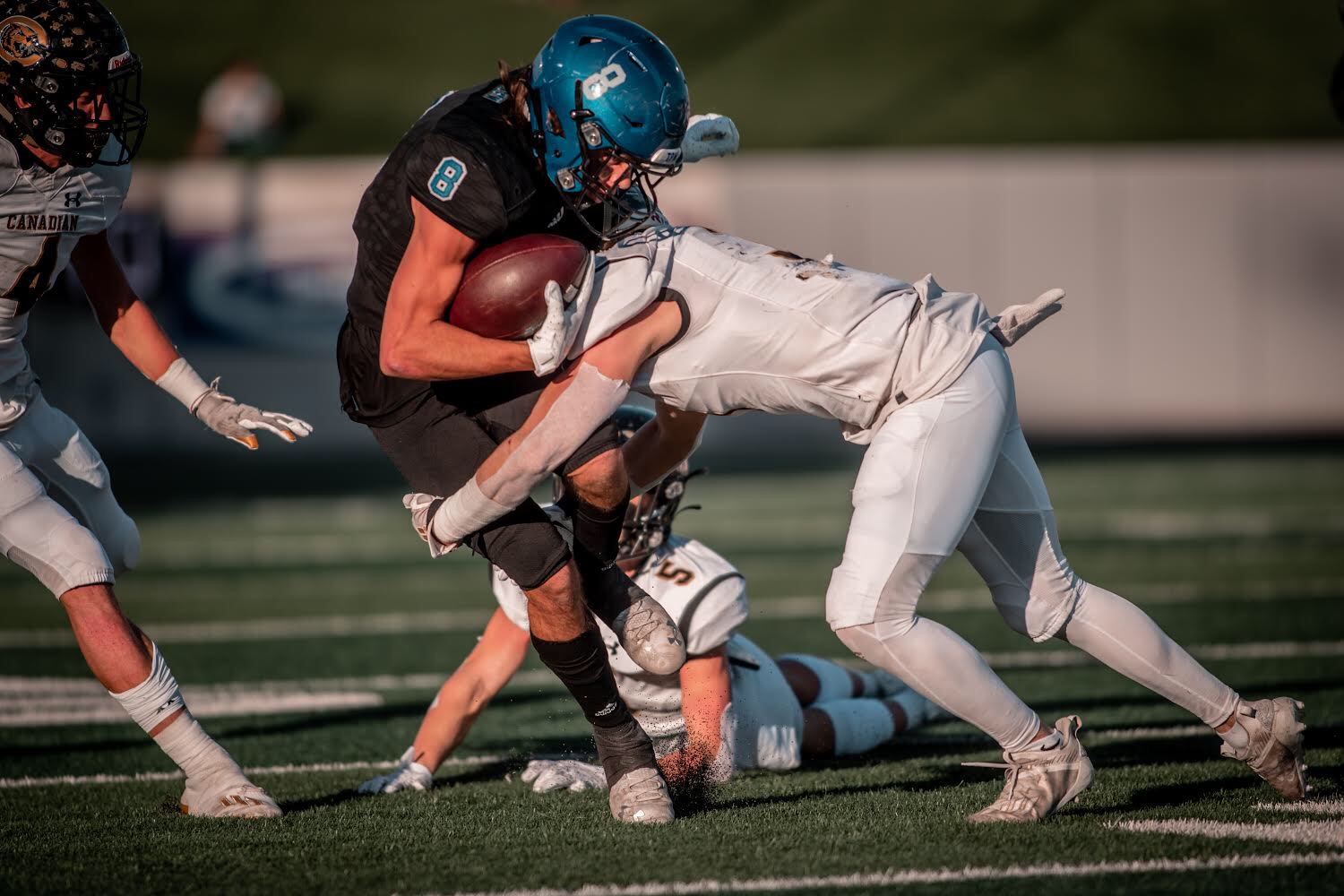 Canadian held control the rest of the way never giving the Tigers momentum, and forcing the disciplined team into uncharacteristic mistakes. Canadian flustered QB Hudson Graham constantly, shut down a powerful run attack, and forced a total of four turnovers. Gunter was held to 83 yards of offense at halftime, finishing with a season-low 248 total yards, and only 93 on the ground.

“This was a huge challenge,” Canadian defensive coordinator Andy Cavalier said. “Gunter is so good on offense. I feel our kids rose to the challenge and played the best game they’ve played all year. Our guys have been talking about leaving a legacy, so it’s is games like this you have the opportunity to leave a legacy.”

Canadian threw in a new wrinkle that left the Tigers defense thrown for a loop. All season Culwell has been more of a pocket passer, throwing for over 3,400 yards this season. The 6-foot-3 senior did do his part going 13-of-24 through the air for 176 yards and a touchdown pass. But he was let off the leash to use his size and speed to be an effective runner. When Canadian needed a big play, Culwell took off for chunks of yards. When Hufstedler was bottled up, Culwell dove into the end zone for a 4-yard touchdown late in the second quarter for a 20-0 lead. At the end of the night the Tigers were left scratching their head with Culwell’s mobility as he ended with 102 yards on 14 carries. 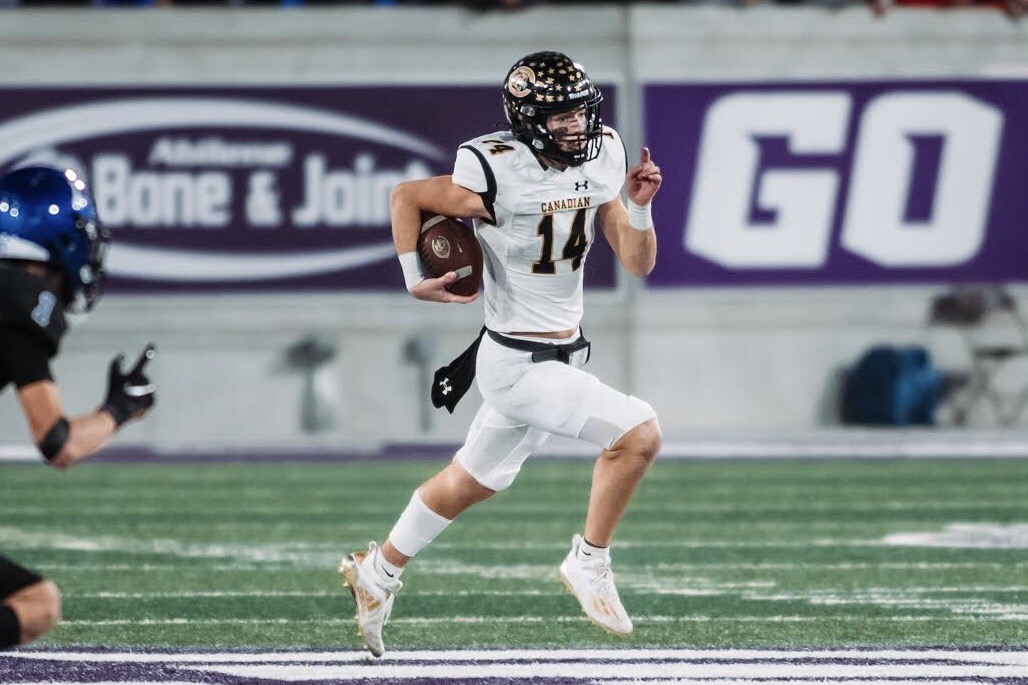 “First off this win felt great,” Culwell said. “We had some unfinished business from last year. It was nice to get them. But as for my running, coach Koetting told me he was going to let me loose and I love running the ball. It was fun, I don’t get to do it a lot during the season.”

Hufstedler had another outstanding performance. If it wasn’t Culwell it was Canadian’s go-to standout hammering away at the Tigers defense line. Hayze ended with 140 yards on 32 carries, while breaking Gunter with a gut punch taking a 33-yard run to the house making it 33-0, and closing out the Tigers.