Randall’s Beck leads way on both sides of football 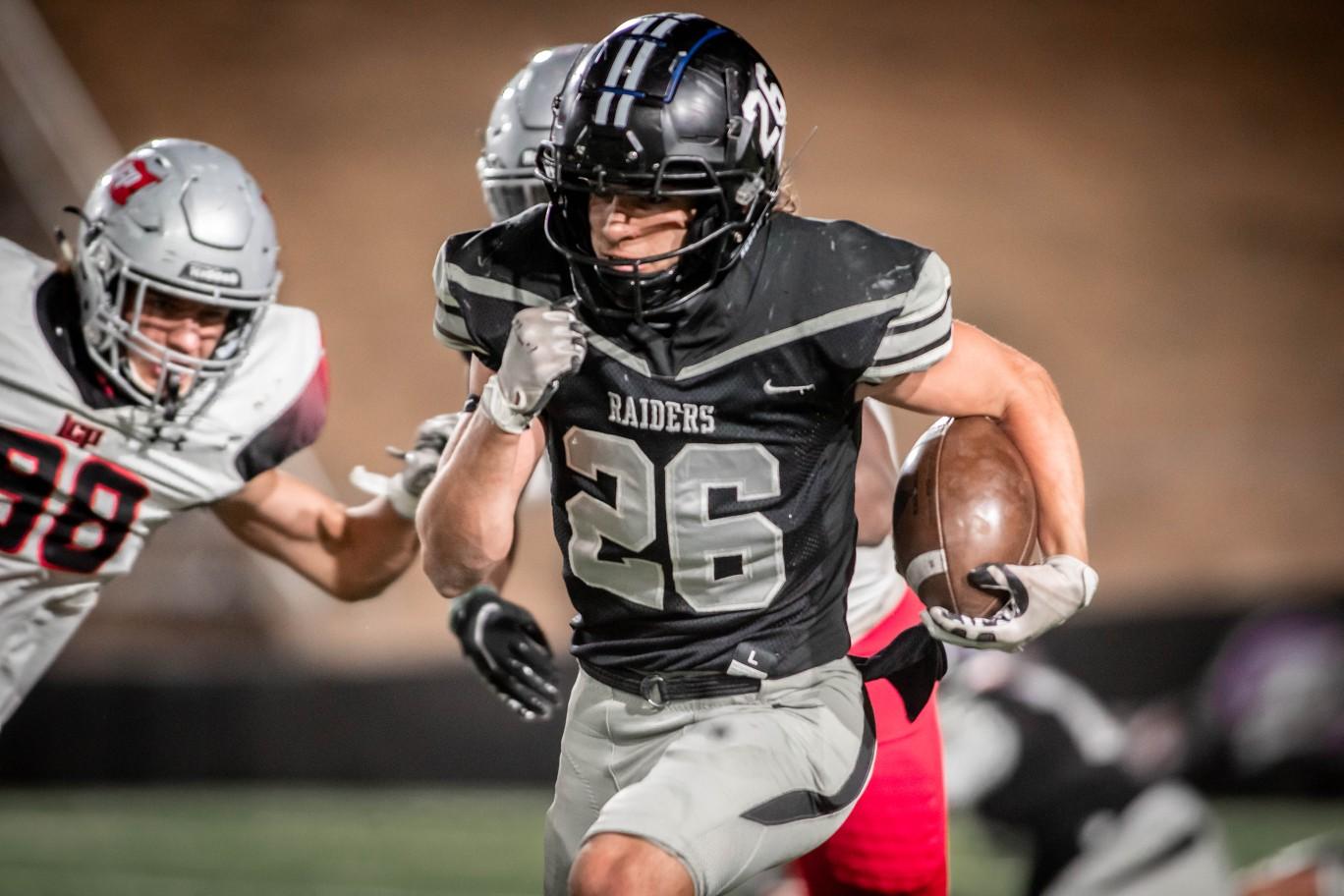 Randall‘s Brayden Beck has been a key cog for the Raiders all season. [Trevor Fleeman/ Press Pass Sports]As the last Texas Panhandle high school football team standing in what has been an unusual 2020 season to say the least, the Randall Raiders are getting a second chance against an old foe to keep things going into 2021.

And chances are when Randall (6-5) travels to Wichita Falls Rider (8-2) for a 1 p.m. Class 5A Division II region semifinal Christmas Eve special playoff game, nobody will be on the field more than senior linebacker-running back Brayden Beck.

When Rider has the ball, Beck doesn’t figure to come off the field as long as the game is competitive. When Randall has the ball, Beck might take a series or two off, as he’s done all season, but which still hasn’t kept him from being the team’s leading rusher.

Beck knows that, at most, he has a few weeks left in a Randall uniform to leave his mark on the program.

“I want the young kids to follow my footsteps and continue the Randal football legacy and go three rounds again,” Beck said. “I want to come back here next year or the year after and be part of that and be proud of that.”

Randall has been as consistent as any program in the Class 6A-5A category in the postseason for a long time now. If it’s the third round of the playoffs, you can set your watch by Randall still showing up, although due to the UIL staggering the season because of COVID-19, the big schools are playing later in 2020.

That status didn’t look so assured this season, though, as Beck was one of the few Randall players on either side of the ball with an abundance of experience. It was up to players like him to carry some weight if Randall was to still be playing three rounds into the postseason.

“I knew we were going to be smaller and probably a little weaker,” Beck said. “Our motto was family over everything.”

In that regard, Beck has been like the big brother leading the way. Not only does he lead the team in rushing (626 yards and eight touchdowns on 94 carries), he’s second on the team behind Branson Britten in tackles with 97 and leads all Randall defenders in takeaways with three fumble recoveries and two interceptions.

Playing linebacker is natural for Beck, as that’s been the defensive position he’s played since fifth grade. He didn’t start running the ball consistently, though, until right before district play his junior season. “We knew from his freshman year for sure he’d help on both sides of the ball,” Randall head coach Gaylon Selman said of Beck. “We knew he had the capability at running back so we just wanted to move him in there if we didn’t wear him out. We saw what he could do there in practice on offense and it’s kind of hard to leave him off the field there too.”

Beck’s original offensive position had been at tight end, but moving to running back as junior was where Randall needed him most. It was made more out of necessity than anything else.

“We were looking at our running back position and we didn’t have anyone who could run the ball and gain yardage on every play,” Beck said. “I started getting some practice time in before district. One thing that helped me is I don’t settle for negative yards. I always want to be going forward.”

Beck’s offensive talents this season most notably showed up in the fourth quarter of a must-win District 3-5A Division II game against Abilene Wylie. He turned a swing pass from Braxton Burd into a 13-yard touchdown at the beginning of the quarter, then escaped on a backside run for a 69-yard touchdown run which provided the clinching score in a 28-14 victory, as Beck finished with 133 yards rushing on only 11 carries.

As happy as Beck and Randall have to be with those results, he still sees himself as linebacker who just happens to get a chance to run the ball. He says that every school in the Lone Star Conference, including West Texas A&M, has offered him a shot to play linebacker and that he’ll start making visits as soon as the season ends.

“I’m definitely a defensive guy first,” Beck said. “Running back is not my primary position, I just stuck at it.”

It’s on defense where it’s rare to see Beck off the field. He’s teamed with Britten to form an excellent linebacking duo which has thwarted opponents this season, especially on the ground.

Randall defensive coordinator Brian Nelson thinks the mental aspect of the game is where Beck excels.

“Brayden’s biggest thing is his intelligence,” Nelson said. “He understands where everybody’s supposed to be. He has what we coaches like to call that motor. He just plays harder than most high school kids play.“

Beck will have to get his motor running, along with that of the rest of the Randall defenders, to have a shot against Rider.

These two teams met in the final game of the regular season at Wichita Falls in district play. Rider, featuring one of the top quarterbacks in the state in Jacob Rodriguez, lived up to the hype on offense, rolling to a 45-14 victory over Randall, in Randall’s regular season finale.

Randall had to wait three weeks after that game to see if the season would resume due to scheduled open weeks to accommodate the COVID crisis involving other schools in the district. The layoff didn’t hurt Randall results-wise, as the Raiders advanced by beating El Paso Parkland 36-35 in the area round last week, scoring on a hail mary pass from Burd to Isayah Hernandez on the final play of the game.

Beck thinks that Randall’s defense learned something from the first meeting with Rider.

“I feel like that first game we played them we gave up the deep ball too much,” Beck said. “That hurt us a lot. But they didn’t run the ball that well and I feel like our defense is going to stop their running game.”