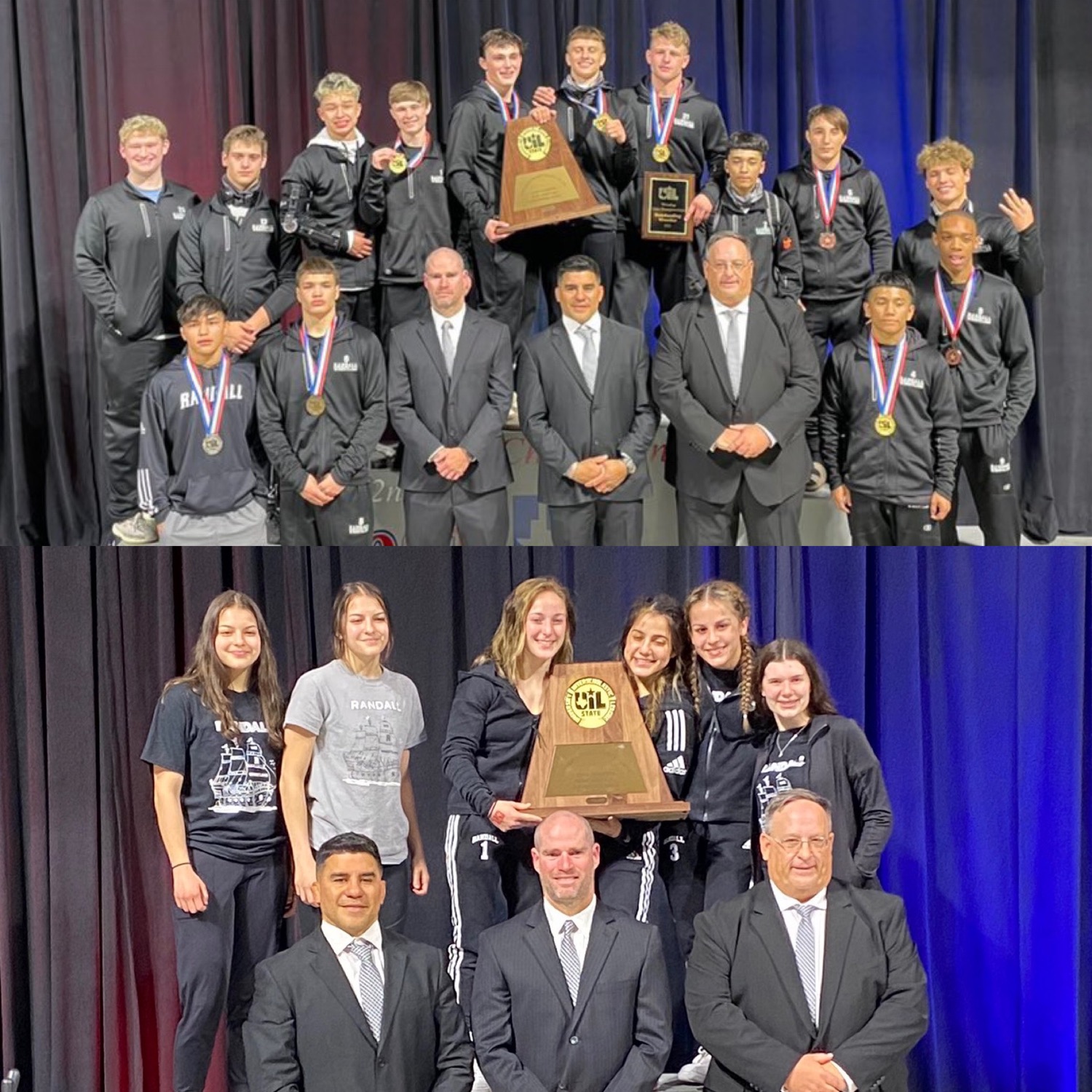 The Randall boys and girls wrestling program’s became the first school in University Scholastic League history to win state championships in the same year Friday during the Class 5A state wrestling tournament at the Berry Center in Cypress. [Provided photo]

History was made Friday as the Randall boys and girls wrestling program’s became pioneers as the first teams in University Scholastic League history to ever sweep team championships in the same year at the Class 5A state wrestling tournament at the Berry Center in Cypress.

On a day where the Texas Panhandle shined combining for 22 wrestlers placing third place or above, with a combined nine state championships, Randall’s dominance stole the show with two outstanding performances from each of its outstanding programs.

The Randall boys walked away from the competition totaling 196.5 points, which was 115 points better than second place Burleson Centennial (81.5).

Head coach David Quirino and the Raiders dynasty continued strong as ever winning its third straight Class 5A state championship, and a seventh since 2008.

What the Randall girls accomplished may have been even more impressive Friday. The Lady Raiders program is only eight years old, and carried only three competitors — Avery Stout, Jaryn Ortegon and Avery Martinez to the state tournament. Those three led by first-year head coach Randy Scott, racked up 71 points to hold off Burleson Centennial (60 points) for their first ever state championship.

“What can I say,” Quirino said. “It’s a great day to be a Randall Raider. This is historic and we’re cherishing every minute of it. We just took it one match at a time, and our teams put their offensive skills on the line and got after it. The confidence was through the roof. Coach (Randy) Scott has done an amazing job on the girls side, and our boys wrestled hard. We had our administration here, our athletic director, Toby Tucker, was here. That meant so much. We’re just glad to add to the success of Randall.”

Randall senior Branson Britten closed out his high school career in prestigious fashion with a perfect season. The Northern Colorado signee, wrestling in the 182-pound weight division, scored three pins Friday, including a fall at the 3:06 mark of his championship match against Zeb Fulmer of Winnsboro to earn his second straight state championship. What made this state title even more unique was Britten ended the year 29-0, pinning 25 of his opponents with four coming by forfeit. That mark ties his mentor Quirino’s record. The 1990 Tascosa graduate also had 25 pins his senior season.

“It’s an awesome feeling to win state again,” said Britten, who ends his career with 141 wins. “It means so much because we’ve all put a ton work into this. Just to see what we did, and what our girls did was incredible.”

Britten was named the Class 5A Most Outstanding Wrestler for his efforts on the mat Friday, however, he wasn’t the only Raider to leave Cypress with gold. Randall made a medal haul as teammate Ashton Bennert (25-1) scored a pin at the 2:00 mark to defeat Lubbock Monterey’s Braydn Valdez claiming the 106-pound crown. Senior Andres Mendoza (28-1) followed in the 126-pound class scoring a 10-1 decision over silver medalist Nathaniel Ruiz from Caprock to win his first ever title, and Jared Gallegos (27-3) stunned the 145-pound division to take gold by way of a thrilling 1-0 decision for his first ever state championship beating Daniel McGurk of Paso Hanks.

On the girls side, Stout (19-2) opened the finals in the 95-pound division with a hot start gaining the first gold for Randall defeating silver medalist Zurri Zamora of Tascosa by an 11-2 decision. Ortegon (23-2) followed in the 102-pound weight class getting a state championship in a tough 4-2 decision against silver medalist Miliyah Pacheco of Tascosa. Martinez rounded out the Lady Raiders earning silver in the 110-pound division. 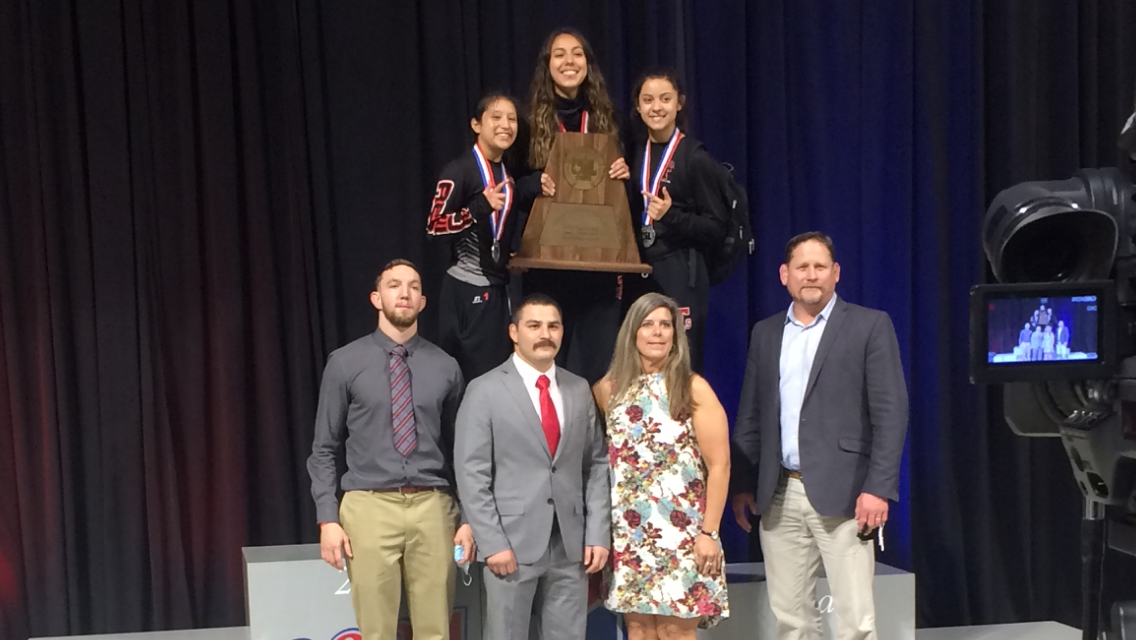 The Tascosa girls finished in third place with 78 points at the UIL Class 5A state wrestling tournament in Cypress on Friday. [Provided photo]

The banner day for the Texas Panhandle wasn’t all centered around Randall. Dumas finished third as teams (78 points), as well as bringing back a pair of state champions. Robert Ruiz (28-2) tallied a 12-5 decision against The Colony’s Hudson Herring to become the 132-pound state title winner. Senior and West Texas A&M football signee, Ahlee Yart, then followed by claiming gold in the 138-pound class defeating Anthony Criscione of A&M Consolidated, 5-3, for his first ever title.

In girls action, Caprock’s Tatiana Garcia capped off an unbelievable year. The junior never lost a match going a perfect 25-0 after three wins Friday. Garcia, wrestling at 119-pounds, topped off her first ever state championship in a grueling 3-2 decision to beat Tabitha Wood of Frisco independence.

The Tascosa girls also team had a great showing finishing in third place overall with 59 points and two silver medalist in Zamora and Pacheco. 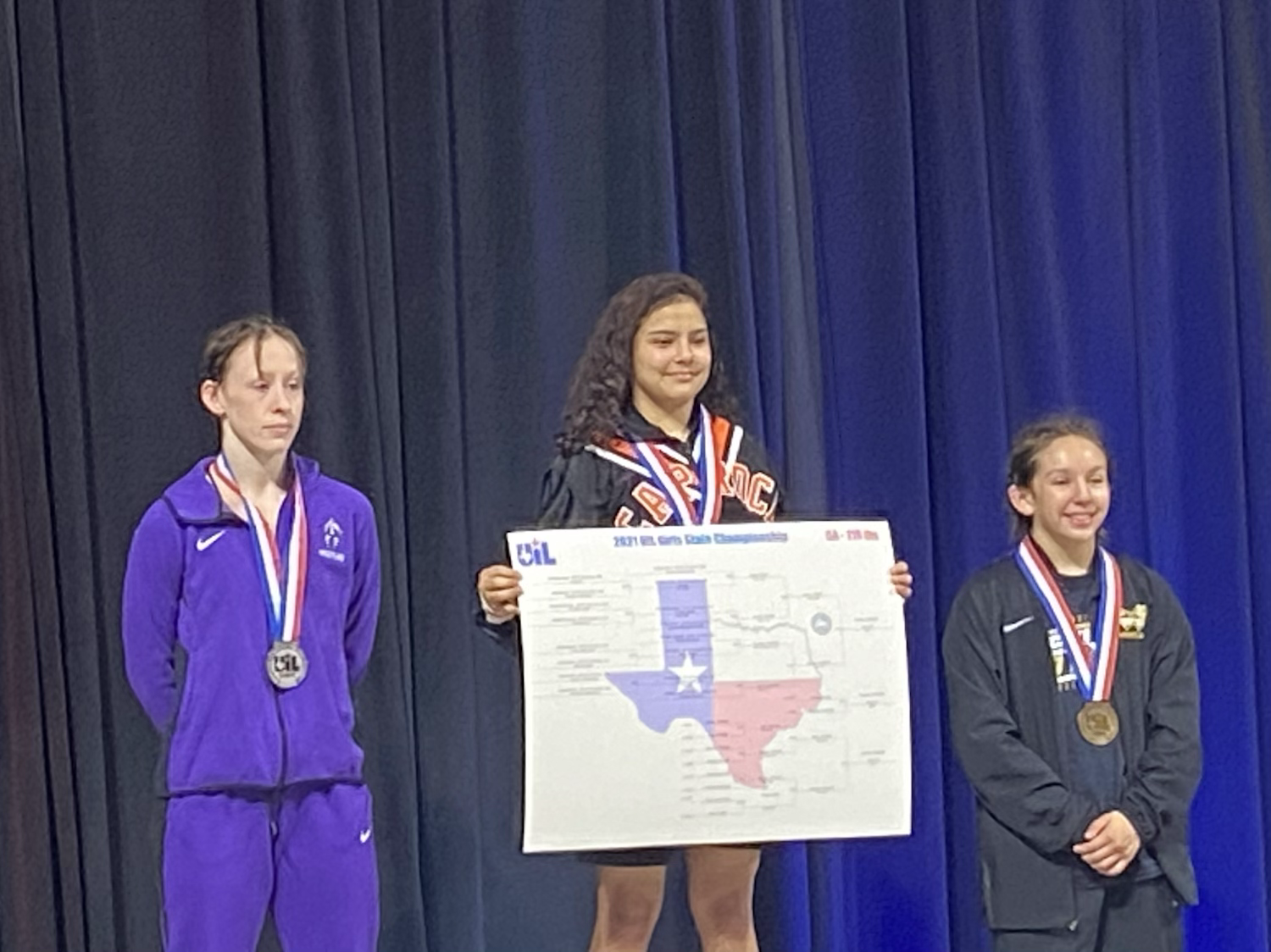