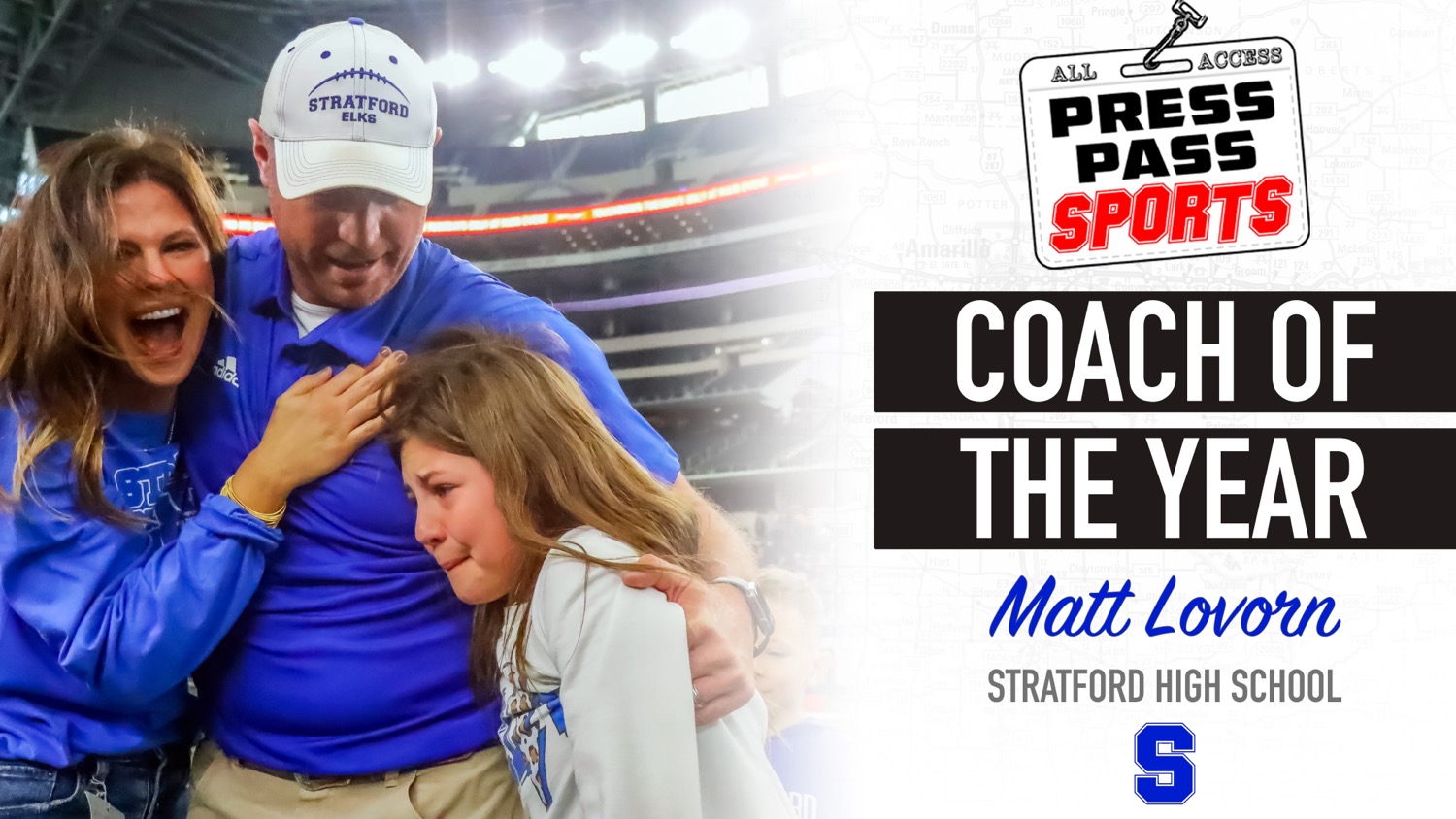 By Lance Lahnert When Matt Lovorn arrived at Stratford in 2009 for his first coaching job, about the craziest thing you could have predicted for his future was one day being the head coach of the Elks standing on the sidelines at Jerry’s World and winning a state championship.

Afterall, Lovorn had grown up in Canyon and played his high school ball under legendary Eagles coach Blake Bryant.

His thoughts on his future at that time were the same has 100 percent of people in those same coaching shoes.

“My wife and I Kelsey, as young adults coming up to this small town, didn’t have in mind we would be here very long,” Lovorn said of those first days in Stratford in 2009. “I had always mentioned people familiar to me how great that would be to go back to Canyon and coach for Coach Bryant. And always thought that.”

Oh my, how plans change.

Lovorn just completed his “lucky” 13th season at Stratford in December, his seventh as a head coach, standing on the sideline at AT&T Stadium – aka Jerry’s World – and coaching the Elks to a 39-27 win over Falls City claiming the UIL Texas Class 2A Division II state championship.

The Elks trailed Falls City 21-13 at halftime but rallied dominating Falls City 26-6 over the second half.

“Ever since my first year here I’ve been surrounded by one of the best coaching staffs in the state,” Lovorn said said. “I wouldn’t be who I am without them. Getting honored as the Press Pass Sports coach of the year is definitely a team honor. And when I say team, I mean community.”

Lovorn was asked how it all happened and did that one 21-14 loss in week four to Bushland inspire the Elks.

“I’ve have been able to reflect on the season and I go back to our bus ride home,” Lovorn said. “The family we have on our team is everything. From the very first week to the very last week those guys competed and played their tails off as a family. We are just getting back from Christmas break and I’m seeing those guys in the hallways again. It’s like we are a big family. It’s a special bond between those guys. I don’t think we accomplish near of what we did without that family bond.”

Or, a lesson learned from a very good Bushland team.

“Playing against Bushland, besides their athleticism, there are things they do like really, really make you get out of your element and that was so good for us,” Lovorn said. “Even though we lost, if I remember right, we had the ball at the very end with a chance to tie the ballgame and couldn’t get it done. Even after the game was done we didn’t feel like our team was defeated or anything like that. We knew we got a ton out of that game.

“We especially saw this during the playoffs when our guys had the mentality of sticking to the game plan and able to roll with any changes we had to make during the game.”

Very interesting stuff from a man who thought his stay in Stratford would be a few years at most. So what happened?

“Getting up here we had some good seasons and bad seasons,” Lovorn said. “For me it was just a learning curve span and going through the whole assistant coaching gig. Coaching junior high basketball, some track and everything. So I thought we would never be here more than a few years.

Metcalf attended the Stratford-Falls City game in Jerry’s World and said this shortly after the game: “I just think Matt gets his players to play so hard,” Metcalf said. “I’m not sure we had the most talent in the Falls City game. But our kids just refused to quit and continued to play hard. You know what I saw? I saw kids wanting to play for their coach.”

Respect for Lovorn by Elks players had already been on display way back in 2015.

When Lovorn was up for the Stratford head coaching job to replace a retiring Metcalf, a group of seniors-to-be Elks players stepped up to heard by the Stratford School Board.

To this day, it brings out the feel-good emotions to Lovorn.

“I had a group of seniors my first year as the head coach going into 2015 as Eddie was retiring,” Lovorn said. “They wrote a letter to all the school board members that they as players thought I should be our next football coach. I still have a copy of that letter. I talk to those guys all the time. They are at our games all the time, like Jack McBryde, Tanner Stone and Ty Hess.”

And then there is the story of Matt and Kelsey’s 7-year-old son, Jett McCoy Lovorn.

Jett was born premature. Forget about football, wins or losses. This was real life.

“Whenever Jett was born he was premature and we went through a stage where everybody in Stratford rallied around us,” Lovorn said. “Kelsey and I talk about it all the time of ever stepping away from people like this. I’m not even talking about a football program. When we are talking about a town of people and kids like that, it makes it hard to think about being anywhere else. There are moments like that where we are indebted forever to this community. We have several moments like that.”

So that’s why next year when Stratford opens the 2022 football season another unimaginable thing to a young Matt Lovorn will take place to Stratford veteran coach Lovorn: he will coach his 100th game as the Elks head coach.

“When you go from thinking we will just be here a few years to those things happening, it makes you really want to be here,” Lovorn said. “You are not even thinking about being anywhere else.”