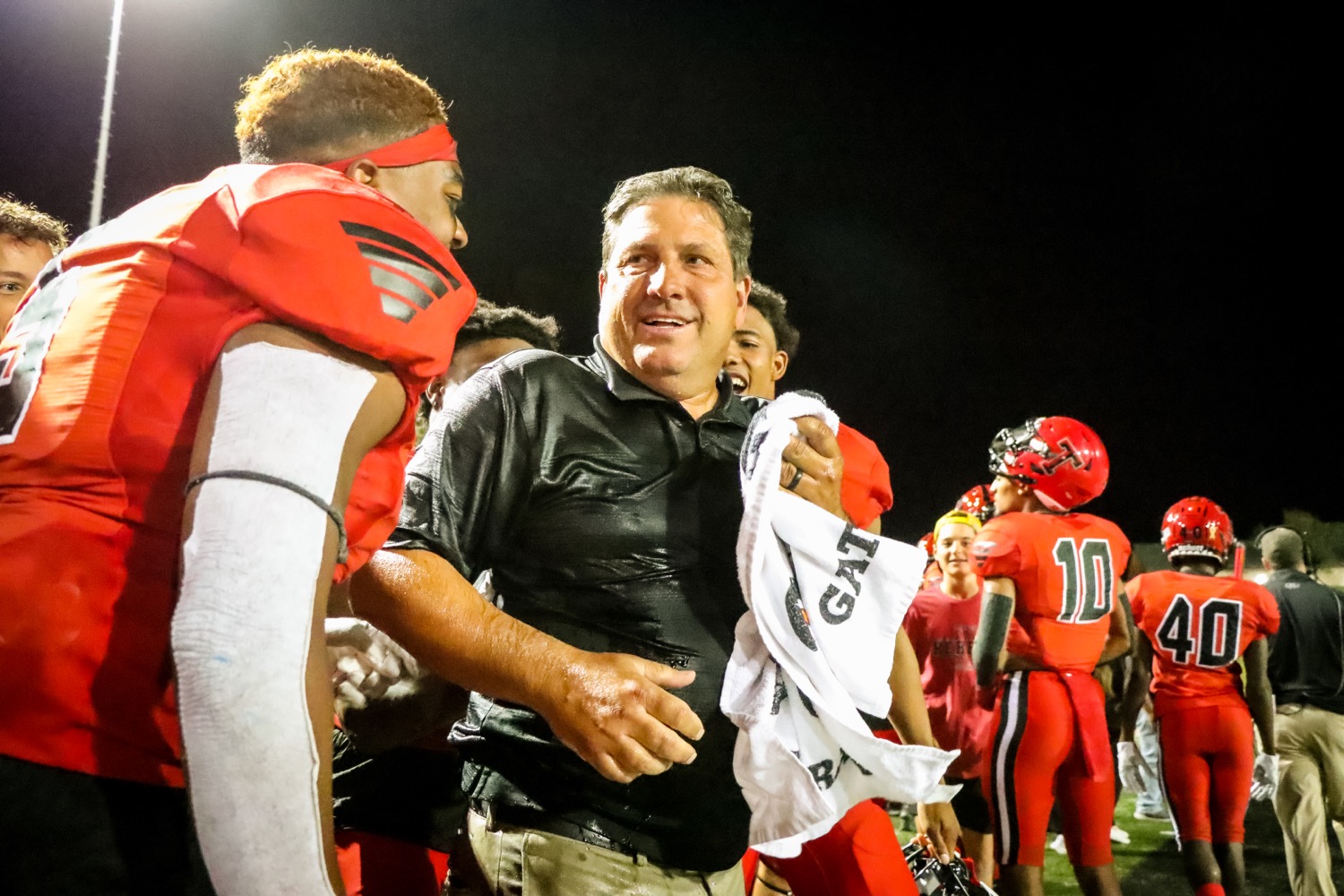 The pecking order of the Amarillo ISD schools, and perhaps District 2-5A Division I as well on the gridiron remained unchanged Thursday night at Dick Bivins Stadium.

In addition to Tascosa remaining a district favorite after one game, Ken Plunk cemented his status as the winningest coach in town by hitting a career milestone in prototypical fashion.

Tascosa appropriately opened district play against AISD rival Palo Duro and showed why it’s the favorite to take home a district championship, as the Rebels used their signature running game and stout defense to crush the Dons 47-6. The win gave Plunk, the dean of Texas Panhandle coaches, his 100th career victory.

If you were going to put a representative win into a time capsule for Tascosa (4-1, 1-0 in district) during Plunk’s 13-year tenure at the school, you could do worse than use Thursday’s game.

“We’re playing really good football right now,” said Plunk, who is now 83-62 at Tascosa. “We’re able to control the game in a lot of ways, particularly running the football. It’s a Tascosa win. It’s a really good win and we really had a lot of great drives.”

Tascosa established itself quickly, scoring two plays into the game en route to rolling to a 34-0 halftime lead.

The tone was set the first play from scrimmage when Tascosa fullback Josh Splawn rumbled up the middle for a 64-yard gain before he was brought down at the Palo Duro 2-yard line. Splawn took it over on the next play for a 7-0 lead.

Those were the highlights of the first half for Splawn, who led the Rebels with 113 yards on only eight carries.

“My job to start the game is to get us four or five yards and get us rolling,” Splawn said. “When the line opens up holes like that it gets the game going better than it normally does, so linemen help. I was a little disappointed I didn’t get it in, but we scored so that’s all that matters.”

It mirrored the previous week’s 46-28 win over San Angelo Central where Major Everhart scored on a 69-yard run on the second play from scrimmage. Everhart had only three carries in the first half against Palo Duro, one of which was a 42-yard scoring run in the second quarter to make it 27-0.

Such quick hitters which provide points in an instant have become the hallmark of Tascosa’s offense, especially early in games.“We don’t have a set script or whatever,” said Plunk on how the Rebels start games offensively. “I think the function of us getting off to a fast start a lot of times has to do with the fact that the opposing teams don’t replicate the speed of our offense, and once they see the speed of our offense they get better playing it as the game goes along.”

Quarterback BT Daniel scored the other three touchdowns for Tascosa on the ground as he orchestrated the ground game to another strong performance with 359 yards.

Palo Duro (4-1, 0-1), on the other hand, struggled mightily in the first half against Tascosa’s defense with only 34 total yards. It didn’t help that starting quarterback Avery Randle left the game with a leg injury in the first quarter.

The Dons quickly came down to earth after an unbeaten start in predistrict play under first-year coach and Palo Duro alum Eric Mims.

“This was a big game for us with a rivalry and a lot of bragging rights,” Mims said. “(The Rebels) played extremely well and they taught us some areas we’ve got to improve in, but at the end of the day it is one game, but it was a big one for us. Tascosa is a measuring stick. They’re the best team in this area and they proved that to us tonight.”

With a minute left in the first half, the Dons opted to go for it facing a fourth and three at their own 38. But quarterback Jayden Garza was stopped after a two-yard gain to give the Rebels the all at the 40, and Daniel scored on a 6-yard run with 38 seconds left in the half to make it 34-0.

Tascosa continued to spread the wealth running the ball in the second half. Tayden Barnes ran for a pair of touchdowns in the third quarter to conclude the scoring for the Rebels.

Palo Duro averted a shutout with 1:37 left in the game when Ikyah Vinson scored on a 1-yard run. That concluded a night where the Dons gained only 139 yards against the Rebels.“I was very proud of the defense,” Plunk said. “There were a few times in the first half that I didn’t think we tackled as well. We were trying to tackle the ball too much and not run through the man, beyond that we covered well and I was proud of the way we played.”

After the game, Plunk was given a football signed by all the members of the team to commemorate his milestone win. But in typical fashion, he wanted to keep it in immediate perspective.

“The most important thing is we’re 1-0,” Plunk said. “I love the fact that I have 100 wins, but eventually if you coach long enough you’re going to get to 100 wins. I’m happy with the fact that we’ve gotten the one and we’re 1-0 in district and that’s what means the most.”Tascosa 47, Palo Duro 6