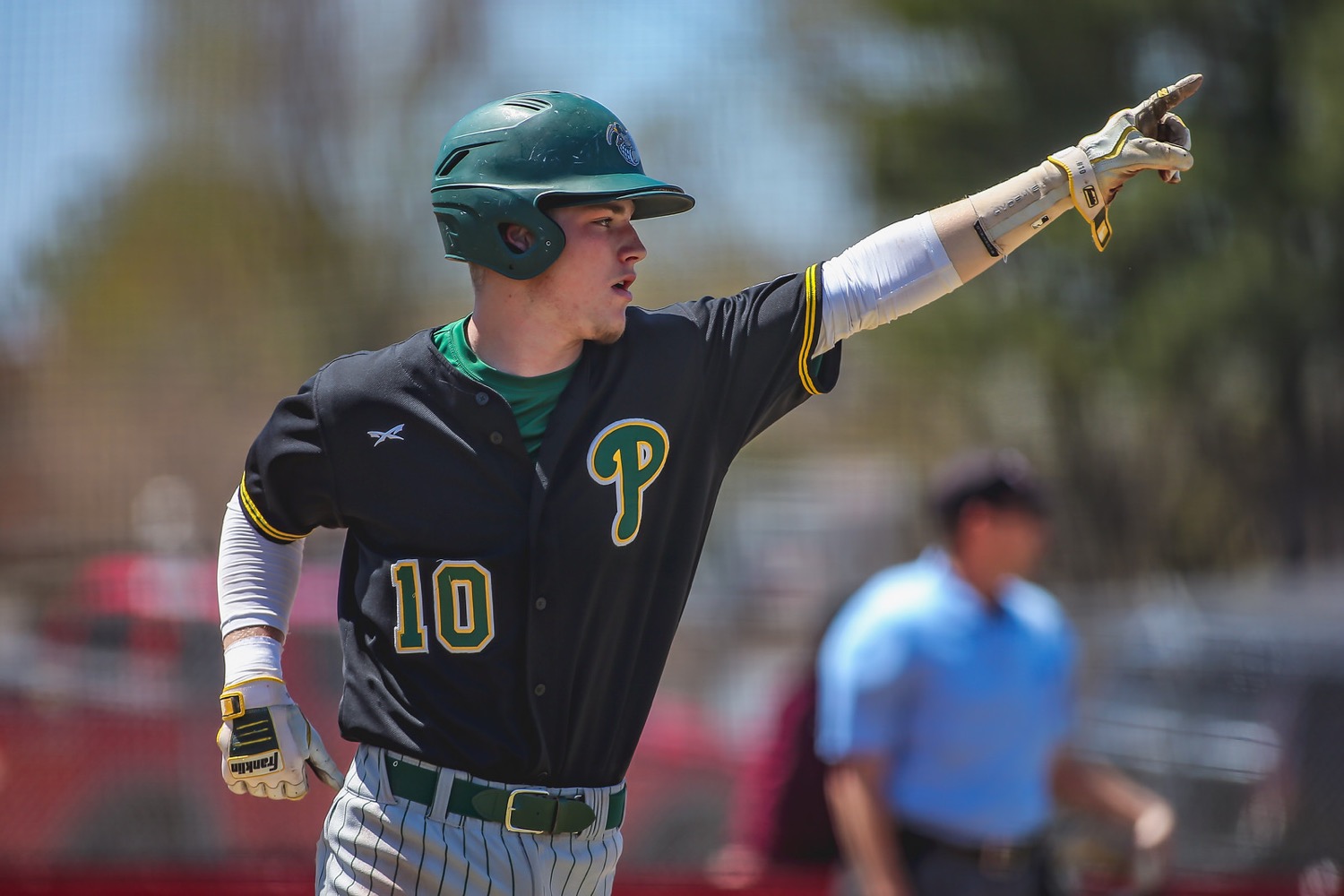 The Pampa Harvesters had to make a late run in the 6th to pull ahead of the Rangers in the 9-5 Pampa win in Borger on Saturday.

Perryton rallied after an early Pampa lead, tying the game at 3-3 in the third on a single that scored two runs.

The Rangers led 5-3 held it until the sixth where Pampa found three runs and overcame the deficit to lead 6-5 on a double by Armando Miranda. The Harvesters protected their lead with another three-run inning in the seventh highlighted by a Miranda single that extended the lead to 9-5.

The win clinches the fourth and final playoff spot for the Harvesters (13-9 5-4), who makes the playoffs for the 11th consecutive season. The loss for the Rangers (9-13, 2-7) snaps their playoff streak at an incredible 27 straight seasons.

Canyon plated nine runs over the final three innings to make a furious comeback and beat Dumas 9-7 to clinch the outright District 4-4A championship at Conner Park in Canyon on Friday.

The Eagles clawed their way back into it by taking the lead in the bottom of the fourth. The rally began with two outs where Landon Finke drove in Canyon’s first run with a double. One at bat later Jack McKay would drive in both Kolton Clements and Finke to give the Eagles a 3-2 lead.

Dumas responded quickly top of the fifth as the first three batters loaded the bases with no outs. A double by Blake Boelter would clear the bases and give Dumas a 5-3 lead before the first out of the inning. Two more singles would extend the lead to 6-3 before Canyon’s Jace Owen would strike out the next three batters to stop the bleeding.

Another two out rally would get the Eagles back within a run at 6-5. A Trent Hefner got things rolling, but it was Tucker Livermore’s double that would give the Eagles momentum. Livermore would advance to third on an error and be driven in on the very next pitch with a single by Catch Brown.

The gap would be closed on a one out RBI single by Ben Black that evened up the game at 6-6. Hefner took the momentum and drove a bases loaded triple to the centerfield fence to give the Eagles the lead back at 9-6.

Canyon’s Mason Alley was on the mound for the top of the seventh in a district championship save opportunity. With no outs and runners on first and second Cota sent a ball up the middle fielded by Livermore who collected the first out but threw the ball away on a double play attempt. The error would bring home a run with the tying run at bat.

A fly out brought up AG Guteriez with a runner on first and two outs. The sophomore Alley would collect the strikeout to end the game.

The Whitefaces took a road trip to Borger on Friday evening and came away with a 15-5 win against the Bulldogs.

The victory keeps Hereford (9-12, 5-4) in line for third place in district. The Whitefaces do have an identical district record to Pampa’s but with two wins over the Harvester, Hereford has the edge. Borger falls to 2-22, 0-9.

Game Stats were not provided to Press Pass Sports.

Coming through big with the bases loaded assured that the Randall Raiders were comfortably in the driver’s seat for the second playoff seed out of District 3-5A on Friday.

A first-inning grand slam by sophomore Kole Dudding and a sixth-inning pinch-hit double by Hagen Shedd with the sacks full provided more than half the offense against Tascosa at Raider Field, and Shedd’s hit clinched a 12-2, 10-run rule victory in six innings. Randall (16-13-1, 9-4 in district) remained alone in second place in the district with the second win of the week over Tascosa (13-13, 7-6), completing a season sweep in then metro rivalry.

If the Raiders win one of their final two regular season games next week, they’ll clinch 3-5A’s No. 2 playoff seed.

Randall got started quickly with six runs in the bottom of the first. Hayden Smith walked and stole second and Payton Bush singled off Tascosa’s Davis Yaws to drive home Smith with the game’s first run.

The Raiders loaded the bases with one out but Tascosa could have gotten out of it when Taylor McDaniel hit a potential double-play grounder to shortstop Logan Malleck. However, Malleck booted it and Bush scored to make it 2-0.

On the very next pitch, Dudding blasted the ball well over the left field fence to clear the bases and make it 6-0 for a comfortable lead.

Randall’s Hunter Phillips took advantage of that. He gave up only three hits, and all of Tascosa’s offense came in the third inning as back-to-back doubles by Josh Splawn and Koben Yarborough cut it to 6-2.

The Raiders took a 7-2 lead into the sixth and put the first four batters on base, as Bush and Cayden Easton both singled in runs to make it 9-2. With the bases loaded and two outs, Shedd entered the game and hit Tascosa reliever Seth Young’s first pitch into the gap in left center, clearing the bases and ending the game with the run rule.

Amarillo High wasted no time in going out and grabbing a district title, as the Sandies scored eight runs in the top of the first and didn’t let up in rolling to a 22-0 five-inning run-rule win which clinched the district championship.

The Sandies (21-6, 12-1) pounded out 22 hits, but Palo Duro (5-21-1, 1-12) helped out, by committing five errors among other things. Tristan Curless was hit by a pitch to bring home Amarillo High’s first run, then an error on a ball hit by Will Franklin brought home three more runs to make it 4-0. Jake Maynard, who started the inning with a single, capped it with a three-run homer to make it 8-0.

Amarillo High scored three more runs in the second to attain the run rule margin. In the third, Maynard and Berry started the inning with solo homers to end the competitive phase of the game.

Cayden Phillips had four hits for the Sandies and Maynard had three as Amarillo High had seven players with at least two hits. Meanwhile, Ryan Proffer, Jett Johnston and Max Milligan combined to allow the Dons only one single.

District 3-5A compiled by Lee Passmore

Dimmitt jumped ahead early and stayed ahead throughout the contest Thursday afternoon defeating River Road 10-1 in Bushland.

The Bobcats then plated four more in the fifth off costly River Road miscues.

Julius Carpio did his job on the mound for Dimmitt. Carpio was locked in going seven innings a complete game performance, handcuffing River Road to three hits, sitting down 11 batters, while giving up only one run.

The Wolves took over after an early Tulia lead and secured their playoff spot with a 6-2 win in Dalhart.

Tulia got things going early with a sacrifice by Jordan Powell to score Brayden Franco and take a 1-0 lead. Dalhart responded quickly, taking the for good in the bottom of the second on a two-run single by Micahsl Ruiz.

The offense would continue to flourish with runs in three of the next four innings. Anderson led the way for the Wolves at the plate, going 2-for-4 with an RBI and a run.

Cale Forry was a force on the mound and almost went the distance for the Wolves before being pulled with one out in the seventh. After giving up an early run, Forry came back to hold Tulia to only two hits and a run, striking out nine along the way.

Bushland’s District 1-3A home contest against Friona has been moved to 4:30 p.m. Monday.

The game was originally set for Saturday, but rescheduled due to the Region I-3A Track and Field Met over the weekend.