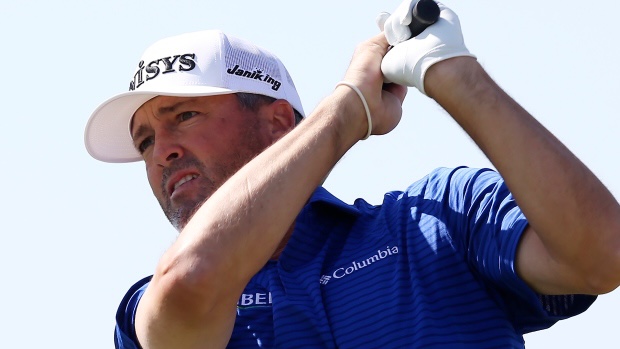 AUGUSTA, Ga. — Ryan Palmer won’t be playing the weekend at the 86th Masters Tournament. But he certainly went down swinging.

Palmer produced three birdies in four holes on the back nine Friday, including a dazzling 5-wood from the fairway on No. 13, but finished with a two-day total of six-over missing the cut by two.

Palmer’s seventh appearance at the Masters opened Thursday with a 3-over 75, then concluded with a second 75 on a windy, cloudy Friday leaving him tied for 59th and two strokes off the cut line.

But the 45-year-old Amarillo native came away feeling much better about his game after Friday than he did Thursday when struggling with his putter.

“The putts I made today will help me moving forward,” Palmer said. “And I hit it really good. So I’m happier today than yesterday.”

Palmer squared an 8-iron on the 125-yard hole and a strong gust of wind halted the flight and his ball landed in Rae’s Creek. He chipped within 15 feet on his penalty shot but missed the bogey putt for the double bogey leaving him well off the cut at 8-over.

“I hit it in the center of the face,” Palmer said. “It was just one of those gust of winds. I didn’t think anyway I would hit an 8-iron at 125 yards and it would come up the way it did. It was more of a shock than anything.”

Palmer answered his double bogey with heart instead of frustration.

The 19-year PGA Tour veteran reeled off three birdies over the next four holes, putting himself at 5-over and with a chance to get to 4-over and make the cut.

Palmer birdies included a 226-yard 5-wood second shot on No. 13 than left him 8-foot for an eagle. He narrowly missed the putt but the birdie put him at 7-over.

“One of my better shots I’ve ever hit, for sure,” Palmer said of the second on No. 13. “Hitting a 5-wood like that with the ball above my feet the way it was. I choked down and it was one of the better shots I have ever hit. A lot of positives I can take from today.”

Palmer capped his birdie barrage on No. 16 stuffing his shot to within 7-feet taking advantage of the slope on the par 3 and moving to 5-under.

“I don’t if it was one of my better stretches here, I’ve had some good one,” Palmer said of the birdie spree. “But that gave me a chance (to make the cut). It looks like I’ll miss it by one, or maybe two.”

He did par No. 17 but wasn’t pleased with his wedge from 135 yards out after his 295-yard drive. The shot landed in the front bunker, but hie produced a nice up and down.

On 18, he needed birdie to make the cut, but his drive was up against the tree line on the dogleg left hole and his second shot wound up left of the hole.

Despite missing the cut Palmer said playing in The Masters is truly special for him.

“It’s the tournament everybody looks to play,” Palmer said. “Everybody looks forward to playing it. I have a lot of work to do get back here next year. No doubt in mind we can do it. It’s a special place.”

Speaking of special, during his two rounds around Augusta National Palmer heard cheers from several people he knew from Amarillo.

“Amarillo is a special place,” Palmer said. “I heard quite a few Amarillo’s out there this week. I will always cherish the city of Amarillo and all the people who raised me along with my parents. I’ll never forget about it and be back there soon.”