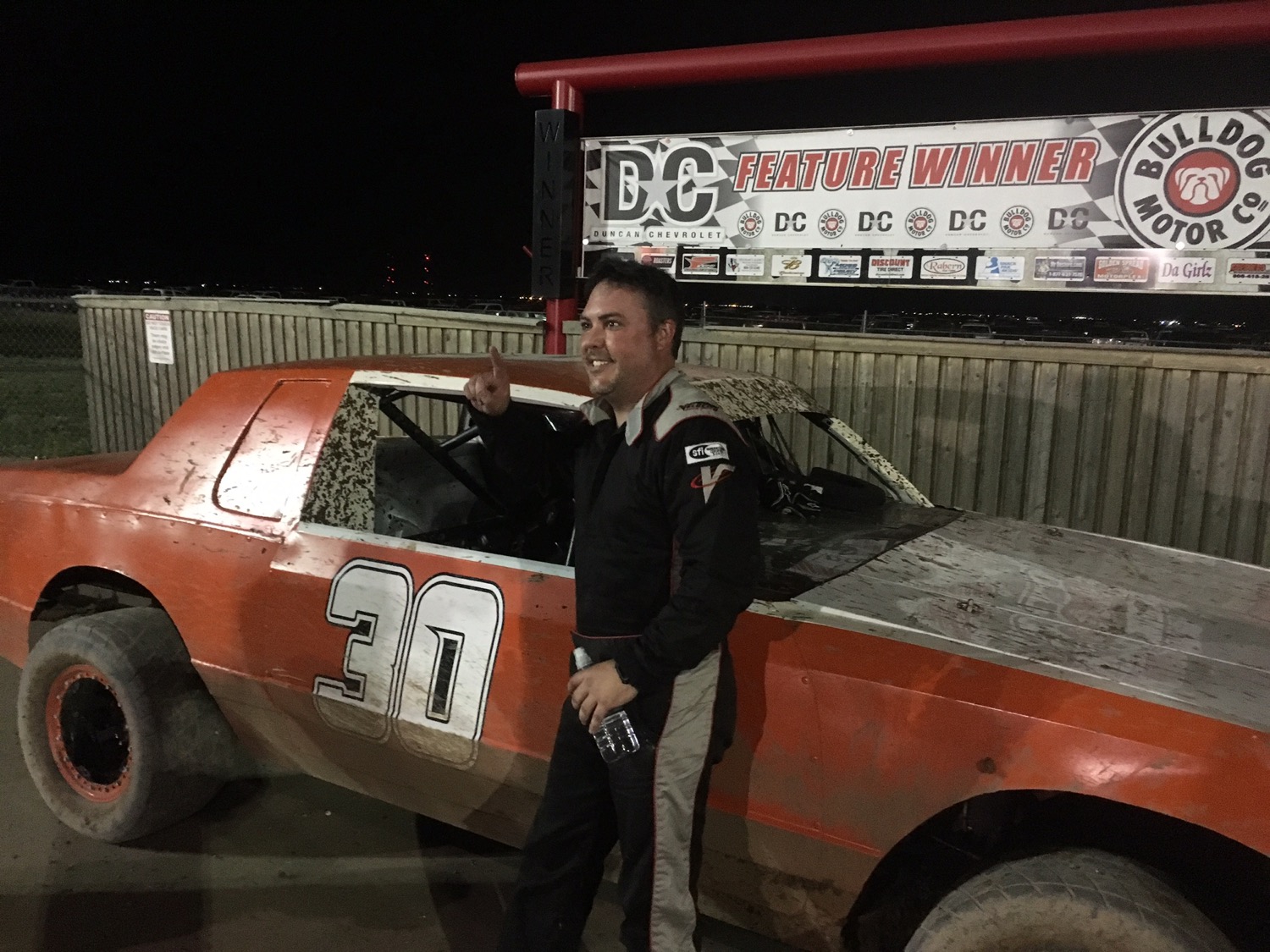 Stinnett’s Chase Orr celebrates his first win of the season in front of his car after taking the Street Stock event at Route 66 Speedway on Saturday night. [Lee Passmore/ Press Pass Sports]

A few new faces in the winners circle from both near and far highlighted what might have been the fastest show of the season so far at Route 66 Speedway on Saturday night.

The greatest speed was provided in the feature event, the G.W. Elkins Southwestern Championship, which made its stop in town as part of the American Sprint Car Series Elite Non-Wing Sprint Car event. It was named for local racing legend Elkins, which was fitting in front of a packed house of over 2,000 spectators.

In the longest feature event at the track of the year, however, it was a driver from a long way away who stole the show. Justin Zimmerman came all the way from Athens, Texas and from the pole position led almost the entire 30-lap race to take home the prize.

The trip out west was worth it for Zimmerman, who took home a $5,000 check for his efforts.

It was a normal night of regularly scheduled racing apart from the sprints, as the other five classes featuring predominantly local racers also competed. However, of the reigning season points leaders, only one won his race.

The Modified event might have been the most intriguing race of the night as a pair of Amarillo drivers battled in the top two spots for most of the 20 laps. In a mild surprise, A.J. Sharpensteen took the lead over Dee Gossett in the last few laps and held on for his first victory of the season.

Gossett easily won his heat to start the evening and led for a good chunk of the main event, but even a second place finish couldn’t knock him out of the season points lead.

In the Street Stocks event, Stinnett’s Chase Orr also picked up his first win of the season, leading through most of the second half of the race. He had to hold off the customary late charge from Amarillo’s Robert Layton, who with his second place finish also held on to the season points lead by a wide margin.

Also picking up his first win of the season was another Amarillo driver, Doug Gillespie, who won the Limited Modifieds.

The only season points leader to come out on top in his event was Amarillo’s Trey Hale, who won again in the Limited Late Models. Hale has eight wins this season, the most of any driver in any class at Route 66.