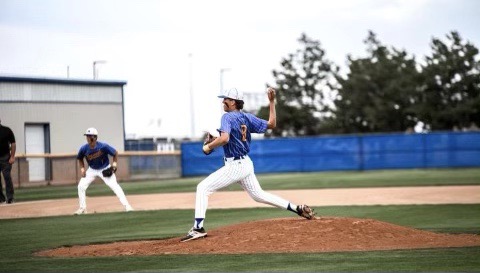 Nazareth pitcher Aidan Moore will get the start for the Swifts in their first ever UIL Class 1A state baseball semifinal against Fayetteville at noon, Wednesday at Dell Diamond in Round Rock. [Mackenzie Teal/ Press Pass Sports]

After quite a long layoff with the Class 1A postseason being a week ahead of the rest of the state, the Nazareth Swifts are more than anxious for the opportunity to play in the school’s first ever UIL state baseball tournament when they take on Fayetteville in a semfinal at noon, Wednesday at Dell Diamond in Round Rock.

It’s been 11 days to be exact since the Swifts defeated Westbrook 2-1 in the Region I-1A championship allowing Nazareth to play June baseball for the first time.

“It’s an awesome feeling to be where we are,” Nazareth head coach Steven Moore said. “We’ve seen an unreal amount of support from the community, and these guys have worked hard for us to be where you are.

“It’s tough not playing for almost two weeks. That’s not ideal, but we had a long layoff after the regional semifinals into the regional finals. The good thing is we had all 16 guys at practice for the first time the past 11 days where they weren’t doing something else. That allowed us to get really good work in and focus on us.”

Nazareth (23-3 overall) has all of the intangibles to become the first team from the Texas Panhandle to win a state title since Dumas did it in 1971.

The Swifts are stacked both at the plate and on the mound. Aidan Moore is expected to get the start Wednesday. The senior has been stellar in his 47 innings this year boasting a 6-1 record to to with a 1.70 ERA. Behind Moore is the rested arms of Kaden Cleavinger (10-0, 2.02 ERA), and Trent Gerber (4-0, 0.40 ERA, with five saves).

As deep as Nazareth is in its pitching, the Swifts can hit up and down the lineup. Carson Heiman leads the team with an impressive average of .562 adding 23 RBIs, and 14 doubles. Gerber, Cleavinger, and Luke Schulte all hit over .460 providing much pop to give the Swifts a scary dynamic.

“We know what we can do,” said Moore, who will leave at years end to go back to his family farm in Sunray. “We just have to go out there and take care of business. At state you have to play your best because it isn’t a series anymore. It’s one game and you’re done. We know Fayetteville is a good a team as we’ll face all seeson. They are a team peaking at the right time so we’ll have to be ready.”

If Nazareth does beat Fayetteville (17-9) the Swifts move on to face the Kennard-Hubbard winner in the Class 1A state championship at 9 a.m. Thursday.