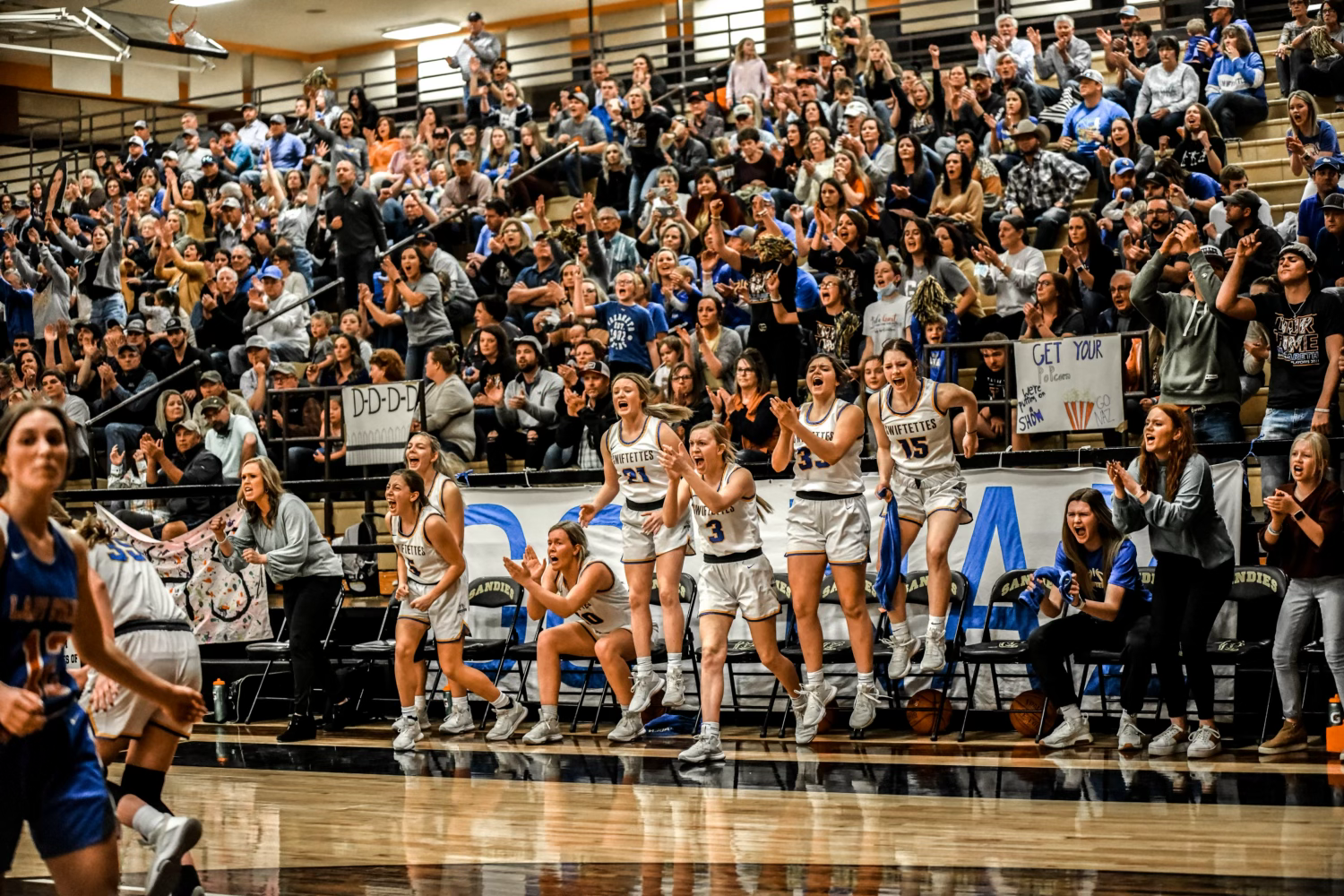 The Nazareth bench and crowd explodes after a big bucket against Claude in during the Region I-1A state semifinal Tuesday night at the Amarillo High Activity Center. [Mackenzie Teal/ Press Pass Sports]

Experience paid dividends for the Nazareth Swiftettes as they went on a 10-2 run to begin the fourth quarter that hepled take down the Claude Lady ‘Stangs 54-42 on Tuesday night in a Region I-1A final at the Amarillo High Activity Center. The Swiftettes are headed to their 30th state tournament appearance in school history, and are looking for a prestigious 25th state title, as well as a fifth in a row.

“This regional title is pretty special,” Nazareth head coach Eric Schilling said. “Just the way we came together, and different players stepped up due to foul trouble and injuries. Experience is big in the first few and last few minutes at the end of the game”.

After a back and fourth first quarter, Makenzy Corrales poured in eight of her game-leading 15 points in the second quarter to stake Nazareth to a 33-25 halftime lead. In the third quarter, Claude never showed intimidation, chipping away at the defending state champs lead led by Andi Holland’s five of her team leading 10 points. The Lady ‘Stangs used a pressure defense to hold Nazareth to only three points in the third, and head to the fourth only down three.

That’s when experience stepped up for the Swiftettes. Merry Gerber and Addie Dyer began the fourth with back to back 3-pointers as part of a 10-2 run in the first 2:58 in the fourth to extend the Nazareth lead out to 11. Emma Kleman then iced the game late nailing 5-of-6 free-throws down the stretch.

“Claude’s the real deal,” Schilling said. “They gave us a battle and fought us every step of the way. But I’m proud of this team. We stepped up when we needed to and knocked down the shots when we had to.”

Nazareth improves to 25-4 overall and will face Region II champion, Westbrook, at a time and place to be determined. Westbrook downed Rankin, 62-41, in the Region II-1A title game Tuesday.