Mission accomplished: Panhandle runs away with 2A team title on a banner day for the Texas Panhandle 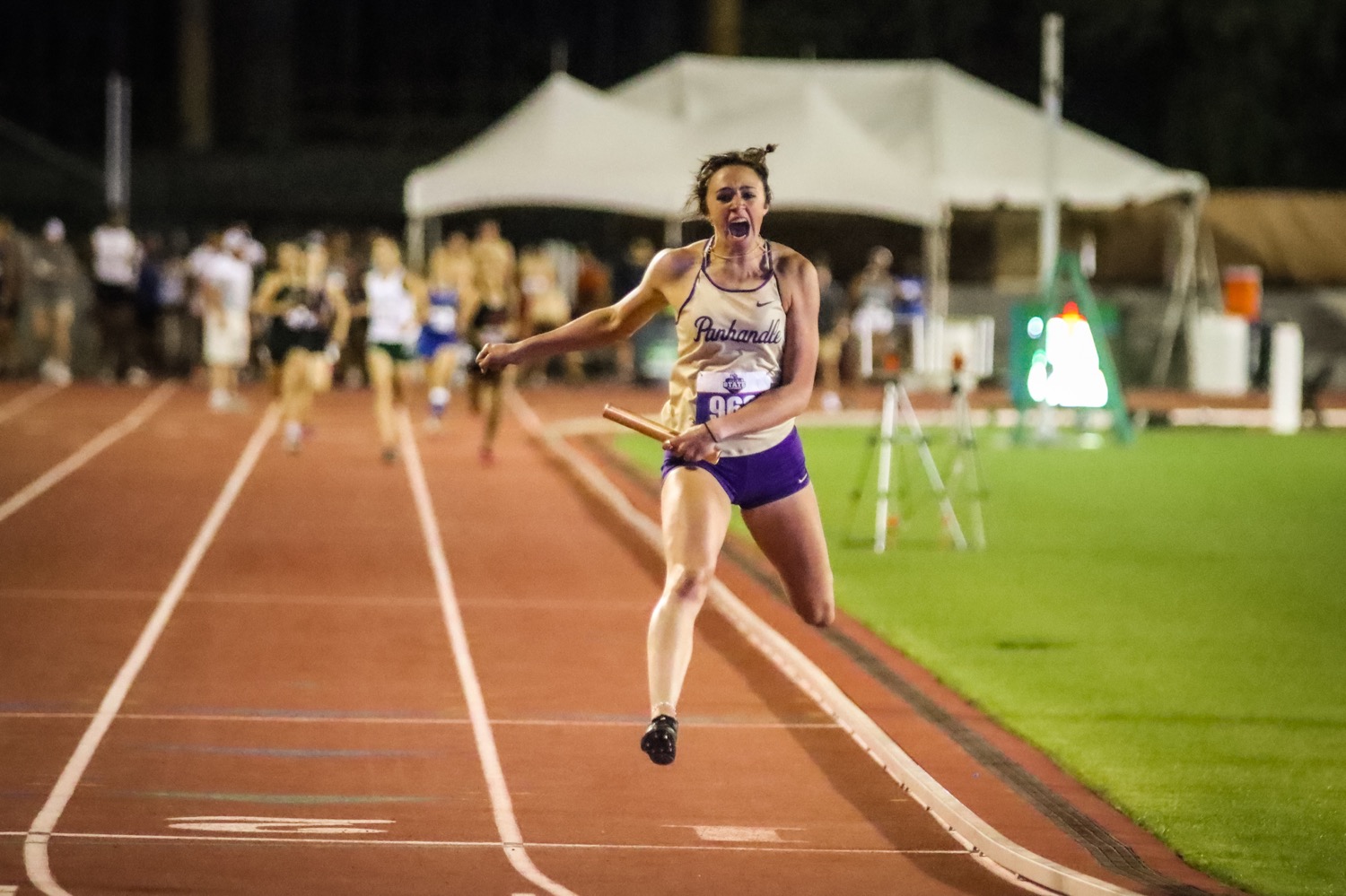 AUSTIN— Coming into the University Interscholastic Class 2A state track and field championships heavily favored Panhandle knew it had a target on its back Friday night.

The Ettes could have cared less. From start to start to finish the speed throughout the relays, and gaining points where they needed led Panhandle to its first team track title since 1967 with a dominating 74 points, which was 28 points better than second place Haskell (48 points).

“Panhandle has had good track programs for years,” Panhandle girls coach Corby Maurer said. “We have a group of girls who work hard, and they never tell us no. They are something special and it’s great to see them accomplish all of their goals.”

Like they have all season the Ettes played to their strength earning 52 of their 74 points in three relays. Panhandle opened the running finals in front of an electric crowd at Mike A. Myers Stadium getting a gold in the 400 relay clocking a season-best 48.42 made up of the team of Skylar Maurer, Macklynn Land, Mason Jones and Sydnee Adee. After a bronze medal in the 800 relay, Panhandle left its mark in the nights final race.

The Ettes left the field in the dust during the 1600 meter relay made up of Maurer, Emmery Sides, Adee and Land, setting a new Class 2A state record 3:56.09.

“We’ve been working on this all year long,” Land said. “We’ve worked hard at every meet to get this record, and finally in this atmosphere we got it.” 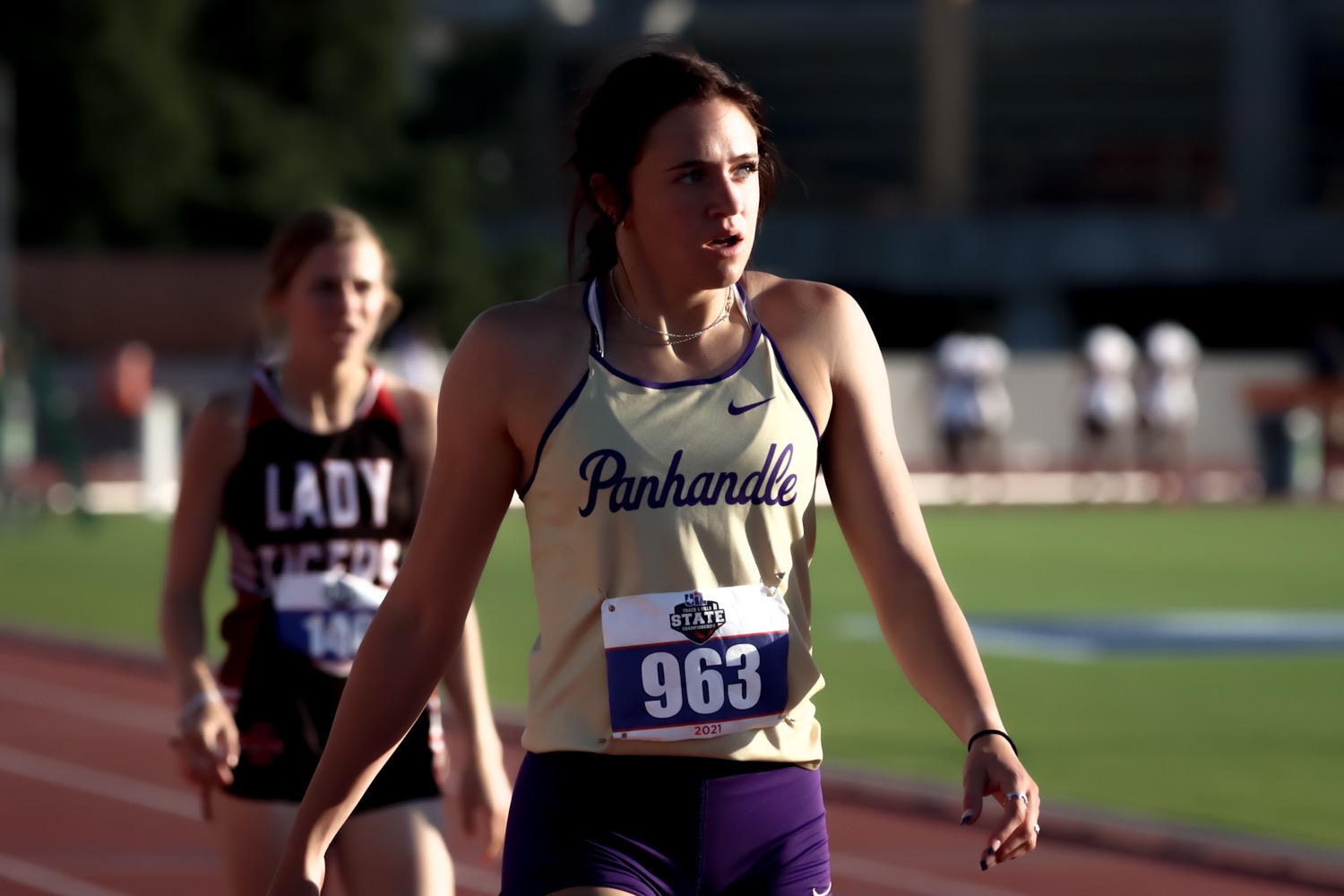 Land, a junior, capped off her stellar season with a medal haul. Arguably one of the best sprinters in the Texas Panhandle, Land brought Panhandle into the lead on her second leg of the sprint relay, won an individual gold medal blazing a 56.01 to capture the 400 meter state title, and was the anchor leg of the mile relay.

“It’s more satisfying to win two team events and an individual,” said Land, who won the 400 meter gold as a freshman in 2019. “I love my teammates and we run for each other. This has definitely been my best season. I feel I really proved what I could do this year.”

Adee, Maurer, and Mason Jones also left Austin with multiple medals. Adee took bronze in the 300 hurdles, Maurer won two golds and a bronze leading off all three relays and Jones won a gold and a bronze as a part of two relays.

“Since we came up short in basketball I’m glad we got this title,” Jones said. “We work hard and we don’t put ourselves first. We’re all for each other.” 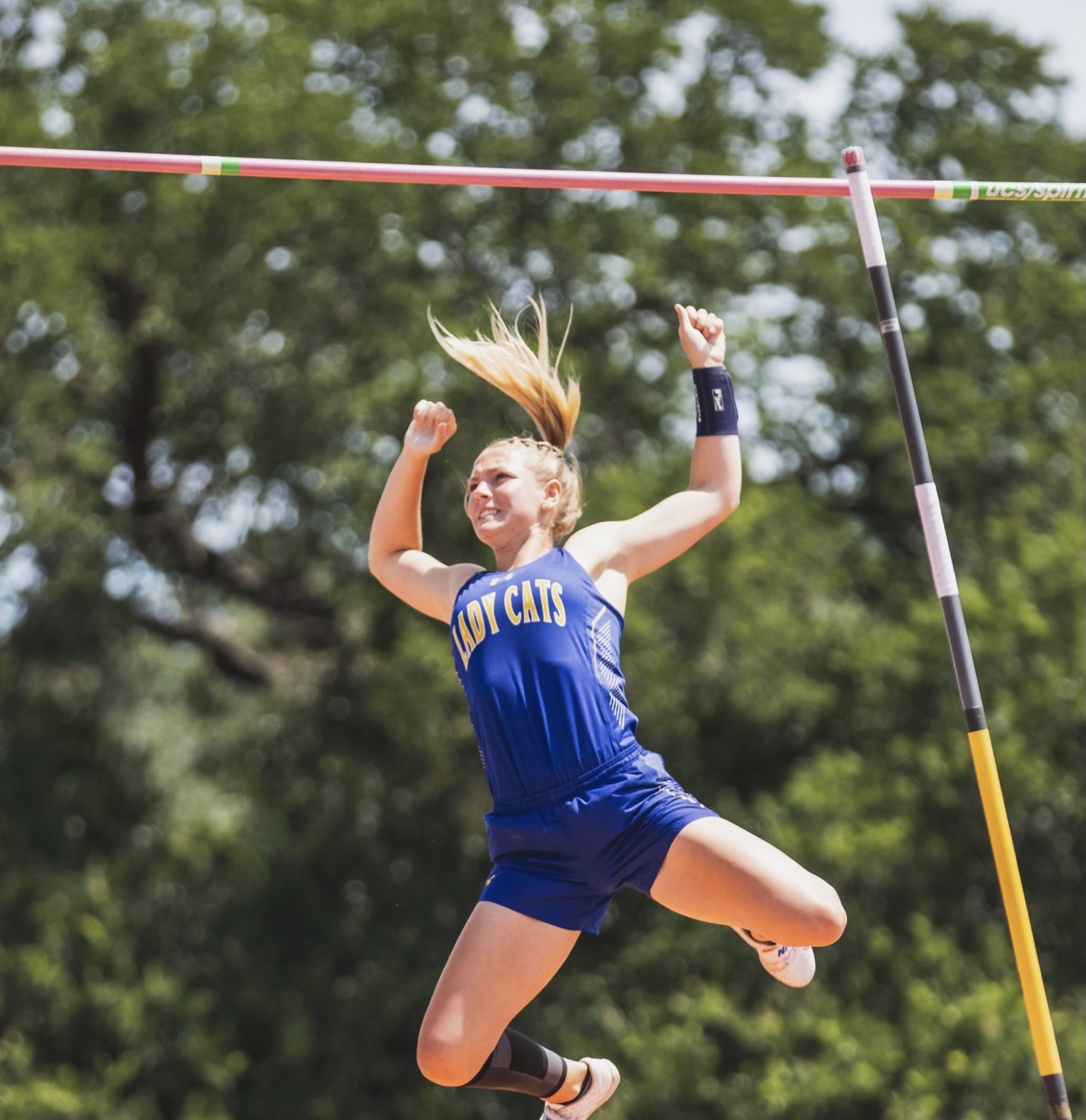 It was a historic afternoon for Sunray’s Ella Strickland Friday during the UIL Class 2A state track and field championships at Mike A. Myers Stadium.

Strickland vaulted her way into the record book setting the 2A state mark in pole vault event with an eye-opening 13-feet-0 1/4 inches. Strickland’s new record also stands alone as the new top mark in Texas Panhandle girls history set by Canyon sophomore Kashlee Dickinson on Thursday during the UIL Class 4A meet.

“This is what I’ve been dreaming for since I was little,” Strickland said. “It’s a real blessing, and a dream come true.”

Strickland had the gold sealed up at 11-feet-6 inches. The junior then cleared 12-feet, and broke the record on her second attempt at 12-feet-7 inches.

With the record safe and secure, Strickland then went for 13-0 1/4, clearing the amazing height on her second attempt to a standing ovation.

“It was a special moment,” Strickland said. “I couldn’t believe it. I’d been wanting to hit 13-feet all year, and what a time to do it.” 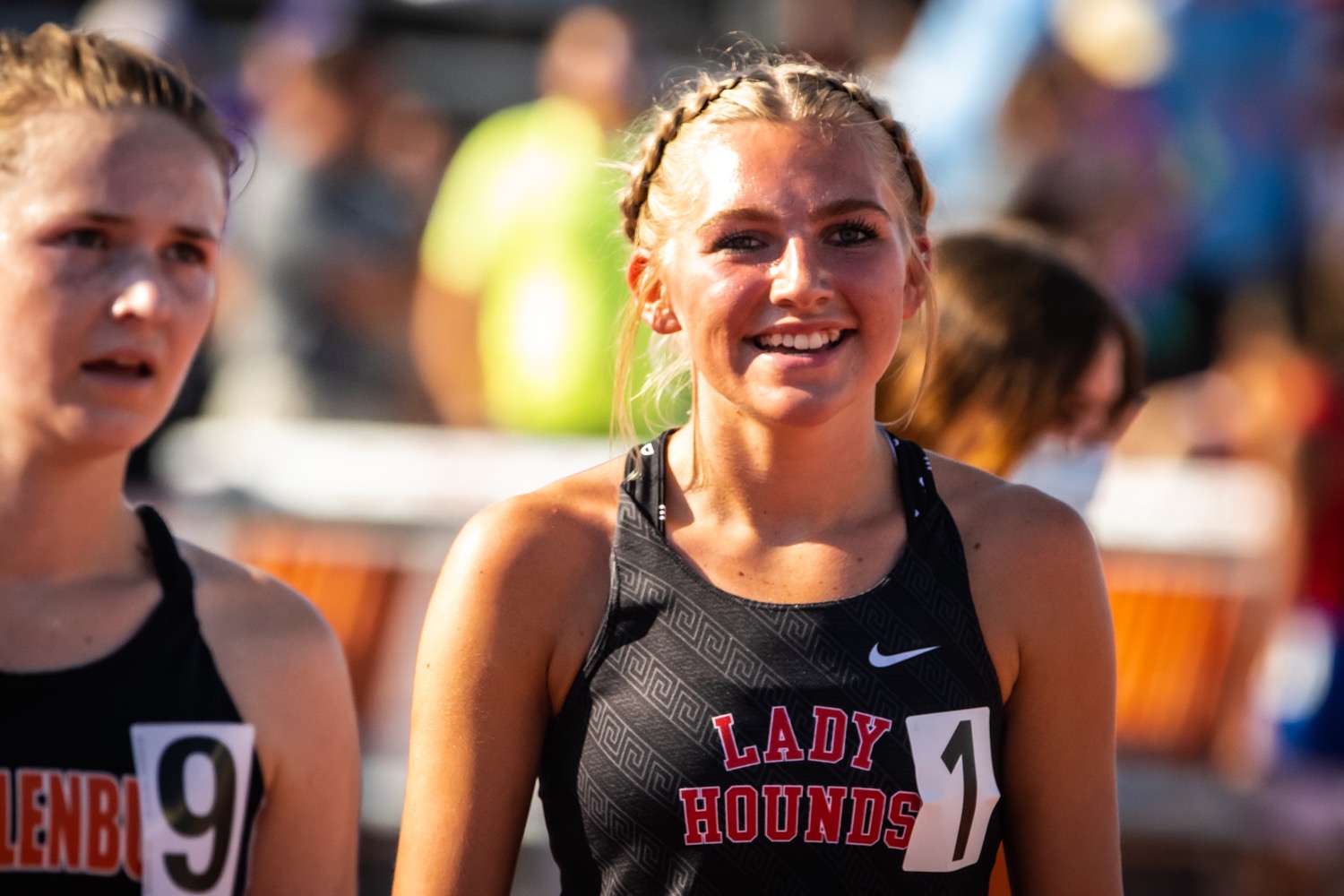 Weaver leaves her mark at state

Gruver’s Dylaney Weaver overcame a near fatal car wreck in September, and now in May she can call herself a UIL Class 2A state champion.

Weaver suffered a fractured vertebra on Sept. 17, after falling asleep at the wheel on her way to a workout at school. The car drifted off the road, and by the time Weaver awoke it was too late to correct. She hit a field entrance and then flew in the air 40 yards just missing a concrete culvert as her car landed upside down.

Weaver was trapped for nearly 45 minutes before her mother, Ammie Schibler, and the EMS arrived.

But that was then, and Friday Weaver running stronger than ever overcame her injuries while leaving the field behind to break Gruver’s school-record, and claim gold in the 3200 meter run with a time of 11:31.61.

“It’s a true blessing. When you look back to the night of that wreck I never would have guessed this would happen. I was running for that record and I’m so happy.”

In the night session Weaver once again ran strong to grab a silver medal in the 1600 meter run clocking a personal-best 5:20.07. 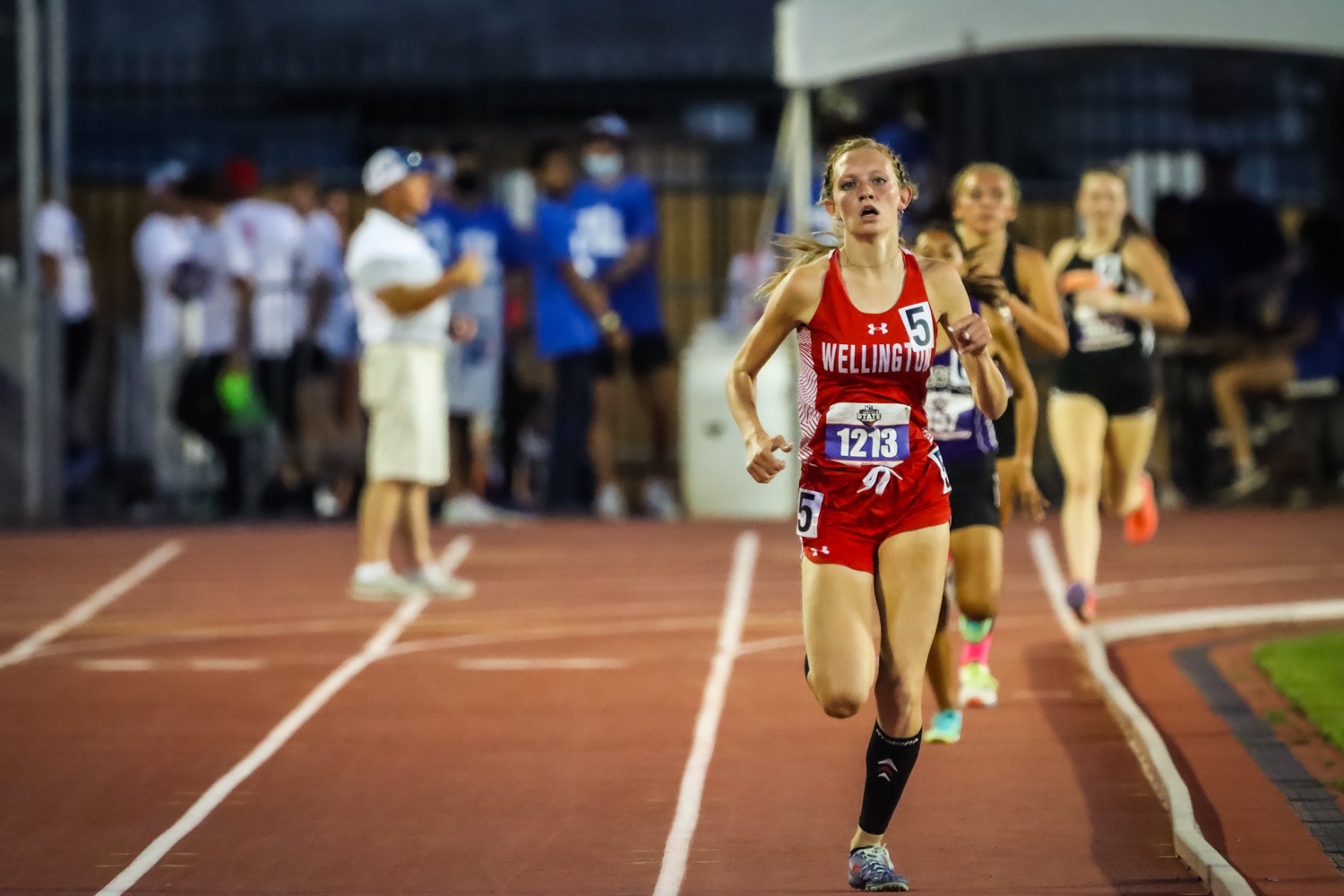 Wellington’s Kyla Kane is no stranger to gold medals. The junior has won two UIL cross country individual titles in 2019, and last November. Kane can now call herself a track champion running a personal-best 5:14.56 to capture her first gold in Austin in the 1600 meter run.

“This feels amazing,” Kane said. “I feel overwhelmed. I felt so good out there, especially on the last lap. It’s so different to win it here than in cross country. The atmosphere here is unbelievable. You’re running in front of so many people. It’s awesome.”

Kane also claimed a silver medal in the 800 meter run with another new personal-mark of 2:17.99. 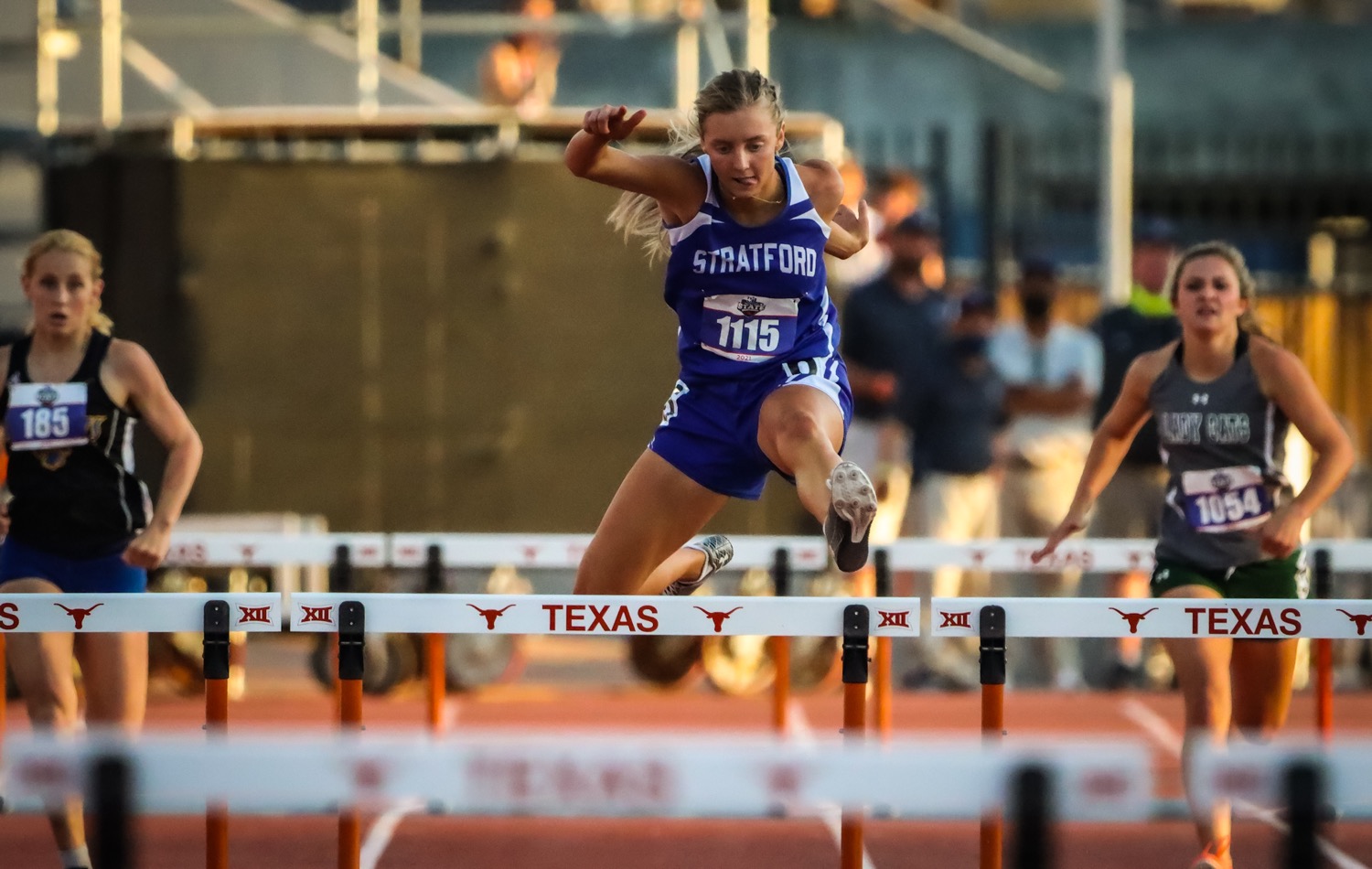 Rese Schoonover of Stratford ended her amazing career highlighting the hurdle events with a pair of silver medals. The Tarleton State signee won her first silver in the 100 hurdles with a 15.12, followed by her second silver in the 300 hurdles clocking a 45.62.

“I was so excited,” Schoonover said. “It was a great race and fun competition. I’m just so proud to be able to get on the medal stand.” 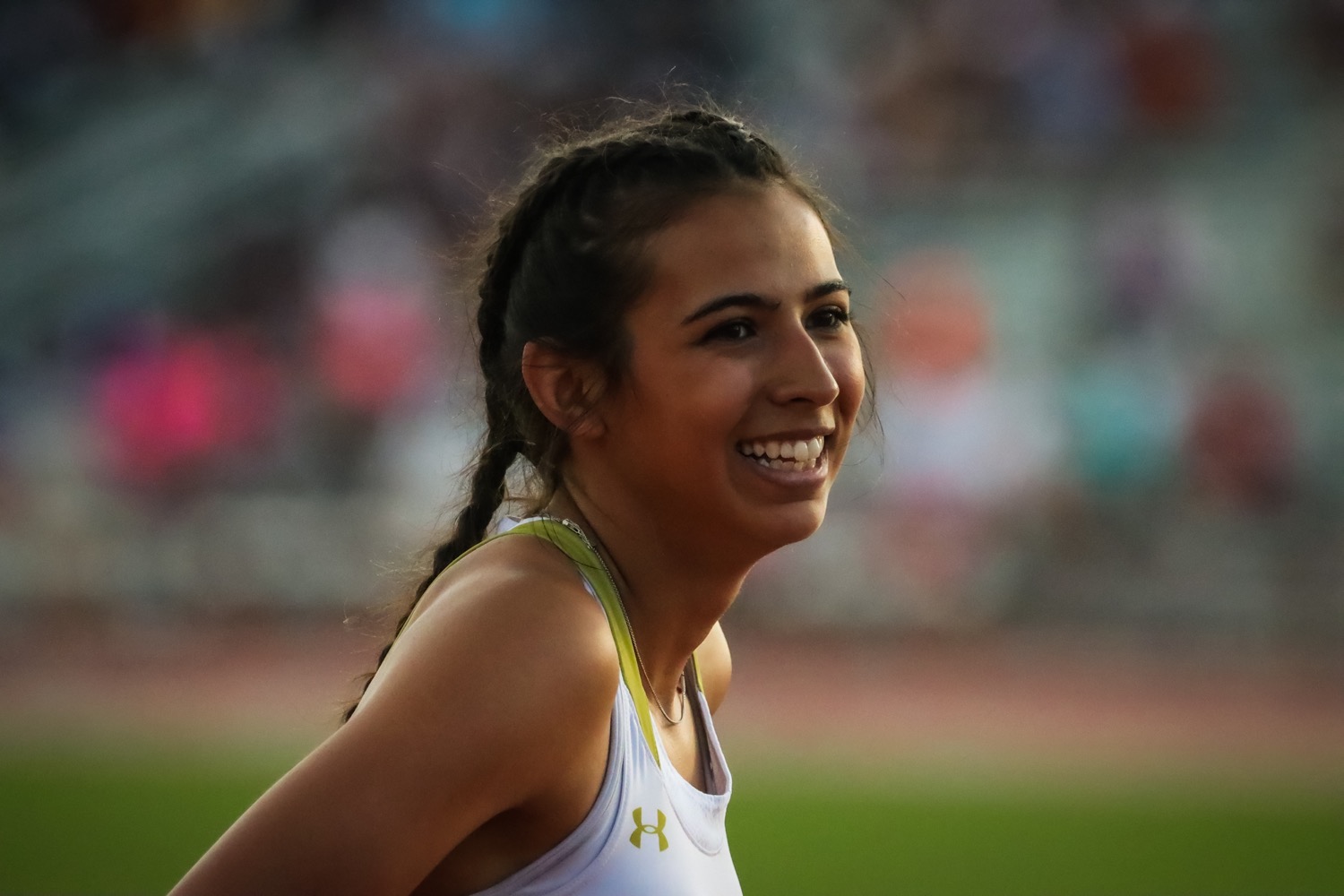 Amarillo High’s Symone Quiles was the only Amarillo ISD girls athlete to make her way to the medal stand Friday. Quiles impressed during the 300 hurdles running a personal-best 43.68 to nab a bronze medal.

“What an experience,” said Quiles, who recently signed to run at Central Arkansas. “I was able to run my best race, get a PR, and what a way to end my senior year.”