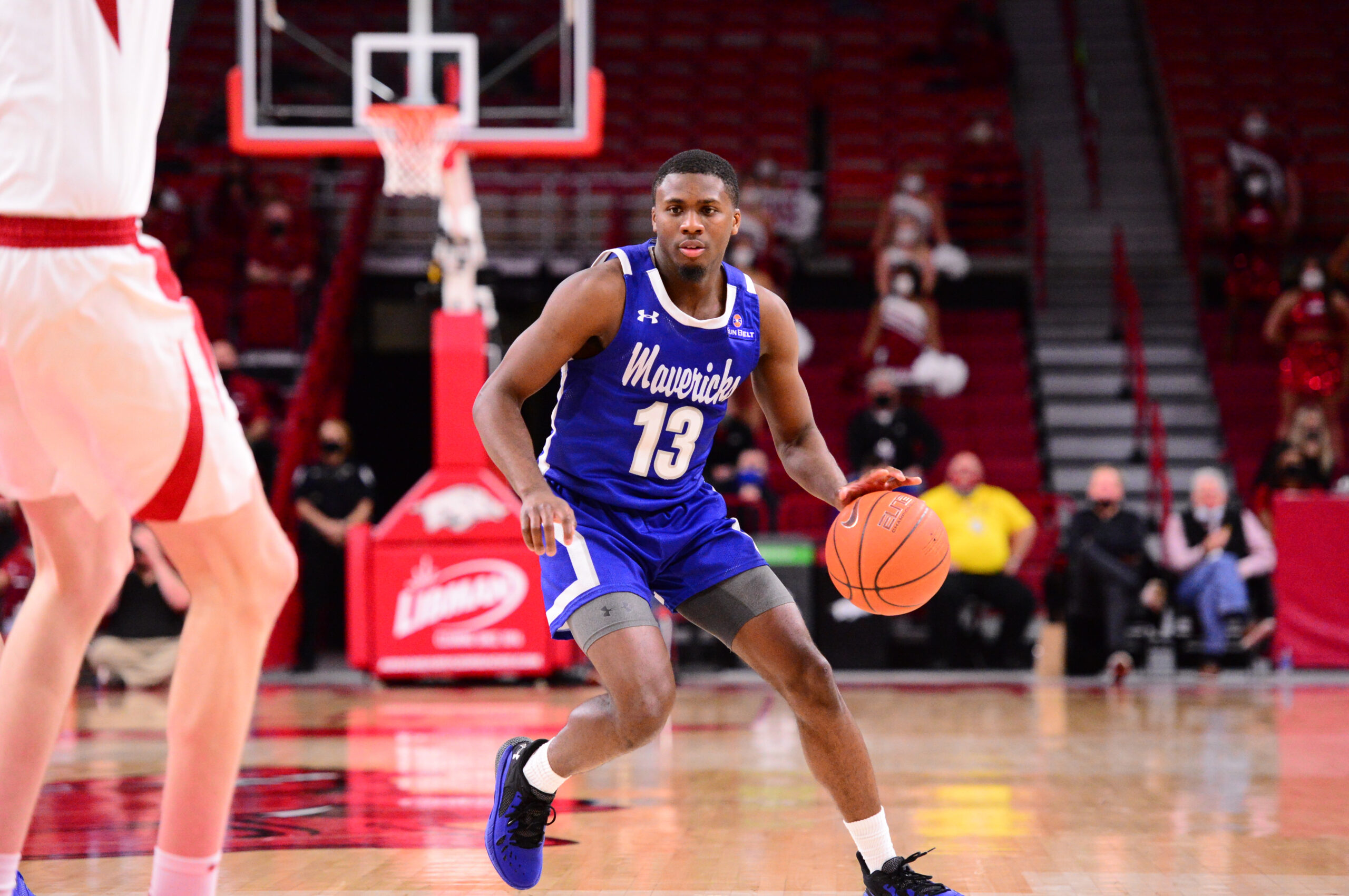 Tascosa graduate and University of Texas-Arlington junior Shahada Wells is averaging a team-high 16.7 points a game for the Mavericks this season. [Photo provided by UTA athletics]

The University of Texas-Arlington men’s basketball team is lucky these days he wears the number for the Mavericks.

The former Tascosa High star completed his first regular season with UTA Saturday night continuing to impact the Mavs and make a name for himself in the Sun Belt Conference.

Wells, a 6-0, junior guard, was named the Player of the Game in UTA’s 64-56 victory over Arkansas State on Saturday by scoring 12 points, dishing out a season-high nine assists and bringing his teammates to their feet with a dazzling chase-down block.

Having gone the JUCO route to Tyler Junior College out of Tascosa, where he was arguably one of the fastest Amarillo ISD players ever dribbling up and down a court, Wells has impressed third-year UTA head coach Chris Ogden.

“Shahada is certainly a dynamic player for us,” said Ogden, a West Texas hoops legend having been named Mr. Basketball in Texas after his 1998-99 season at Seminole High School and was an assistant at the University of Texas and then at Texas Tech under Chris Beard. “He’s so unselfish and guys love playing with him because of that. He’s a great person. Always on time and it’s always ‘Yes, sir. No, sir.’ “

Wells said UTA was the place for him from the get-go when Ogden came recruiting.

Ogden said Wells’ “quickness and long arms to deflect passes and make steals, and then his ability to get to open space and get off his own shot” was part of the reasons he was interested in the Amarillo native.

For Wells, it was a no brainer to choose UTA.

“For me it was they needed me and I needed them,” Wells said. “It was a thing where their point guard was leaving and I felt like I could come in here and step up and be the leader they needed. My game fit here. I feel like the higher the competition the more I have to work and get better. And I’m willing to do that.”

Wells said while at Tyler JC for two years his game changed from his Tascosa days, especially his shooting skills.

“My defense got a little better and I was shooting the mid-range and 3-pointer at a higher level than at Tascosa,” Wells said.

Wells’ improved shooting skills has proven true in his first stint at the Division I level having scored in double figures in 24 of 25 UTA games.

“I feel like our team has come a long ways,” Wells said. “We had a little down spurt but now we are back up and found our identity as a team and everybody is playing their role.”

Ogden said one role Wells plays for his team is bringing an infectious attitude to the court every day.

“Shahada has this positive spirit about him,” Ogden said. “He is always smiling. And he’s come a long ways in his decision making on the court. He’s just great to coach.”

Wells said the reason for his up-beat attitude is really pretty simple and his respect for others started early in his life.

“My parents taught me at an early age to be respectful. That’s where the yes sir, no sir comes from.”

Wells has certainly had his moments in the “Sun” Belt Conference.

Back on Jan. 15, Wells lit up the Louisiana Ragin’ Cajuns for 31 points leading the way to a 91-86 UTA victory. Then just Saturday night, Wells showed his impressive quickness, speed and hustle with his are-you-kidding-me, chase-down block in the win over Arkansas State.

Throughout the Sun Belt season Wells has impressed Ogden with his steals. Wells said give a shoutout to his football career for his ability to make steals on the basketball court.

“I used to play football when I was younger and was a cornerback,” Wells explained. “I had to read the eyes of the quarterback. So in basketball I’ve learned to read the offensive players eyes.” 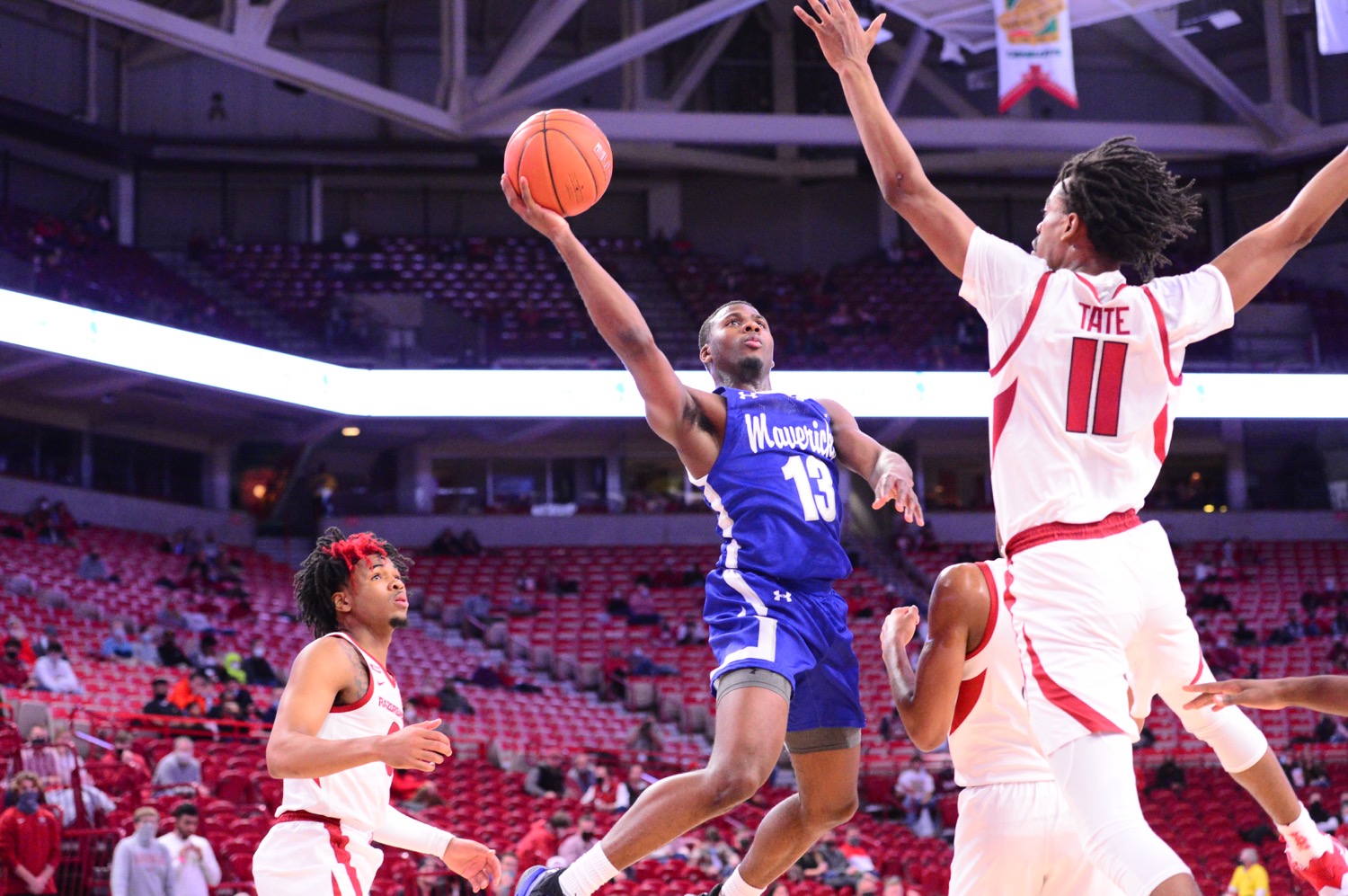 UTA’s Shahada Wells (13) goes up for a shot against Arkansas during a nonconference game earlier this year. [Photo provided by UTA athletics]

However, Wells’ most eye-opening play this year arrived Jan. 30 when he went viral over social media after scoring the winning points at Arkansas State in a 65-64 victory.

Wells took an outlet pass from a teammate after a missed free throw. He was standing near the free throw line at the opposite end of his basket.

Wells blew up the court dribbling and instead of attempting a desperation 3-pointer, he was fast enough to get all the way to the basket and score a layup just before the final buzzer for the dramatic one-point win.

“He just has this sixth sense,” Ogden said of the impressive burst of speed Wells showed to beat the clock that night. It wasn’t planned. It just happened that way.”

Wells said the highlight plays are nice, but all he wants to do is help UTA win games.

“The 31-point game was a good game for me,” Wells said. “I really just took what they gave me and everything was falling that day.

“And that play (against Arkansas State) did just happen. It wasn’t supposed to happen like that. I was supposed to be on the other side of the floor. I saw everyone run to that side though, so I ran to the other side. I was kind of nervous because I thought our big man had stepped out of bounds he grabbed the rebound. But he didn’t. When I grabbed the ball I glanced at the clock and saw how much time was left and all I wanted to do is try to get something up. I didn’t know I was going to get that deep all the way to the rim. It just felt good to get a split with Arkansas State and we needed that win.”

Wells said playing D-I hoops brings a smile to his face every day and his message to 806ers who have the same D-I hoops dream he had growing up is simply show up every day and do your best.

“For me, Division I is everything I thought it would be. I’m glad I went the JUCO route. I’ve met a lot of people and made a lot of connections. Coming from Amarillo to Tyler, then Tyler to Arlington, I’ve met so many new people and experienced new surroundings.”

UTA and Sun Belt Conference fans have met Shahada Wells this year and know wearing No. 13 isn’t at all unlucky.

“My first reason to wear No. 13 is that’s the street my great grandmother lived on in Amarillo,” Wells said. “Thirteenth Street, so that’s a tribute to her. Then James Harden wears No. 13 and he is my favorite player.”

Support our mission
Previous articleBuff briefs: A look at the week in WT athletics
Next articleCanyon holds off Bridgeport to take Region I-4A title