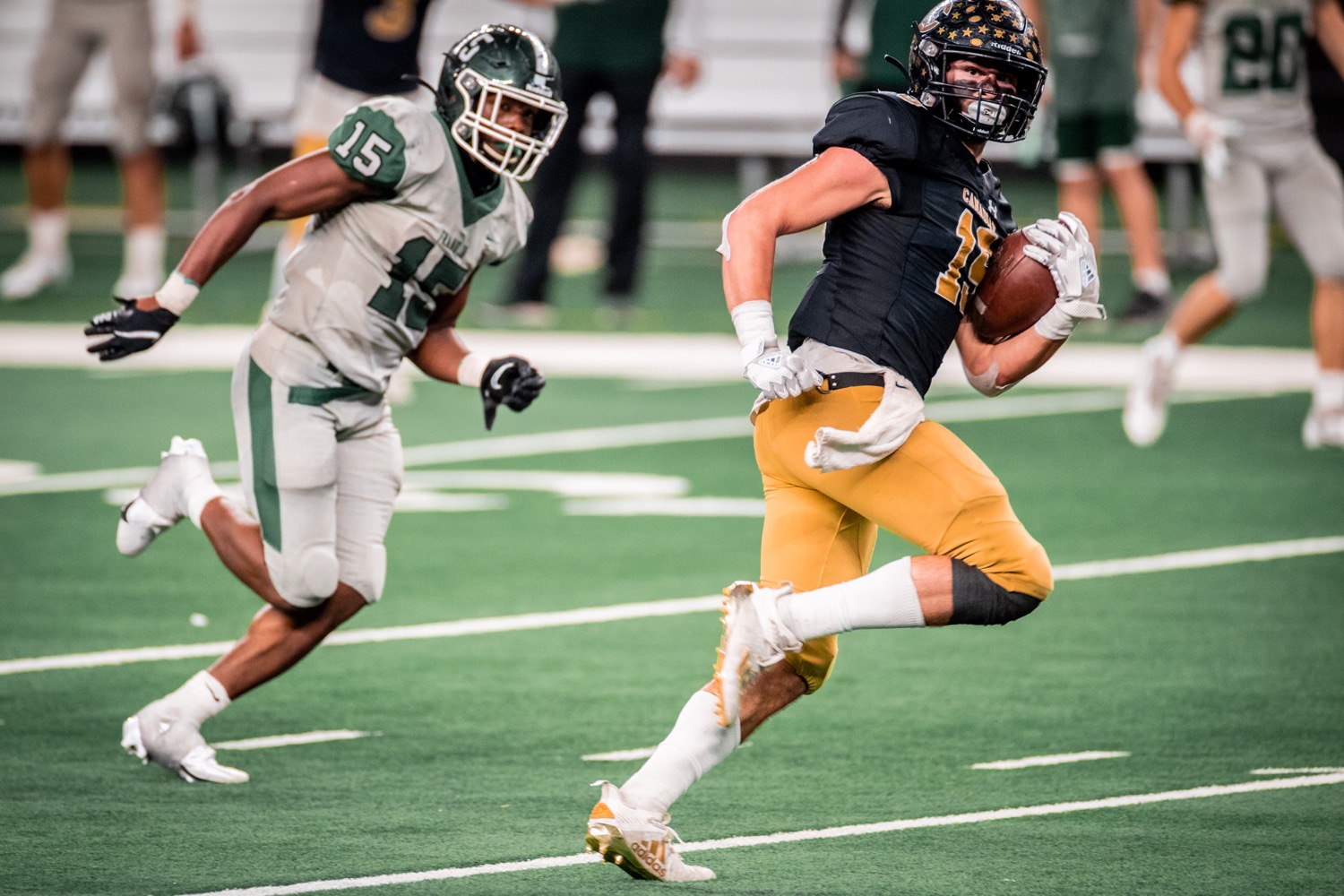 Canadian wide receiver Reagan Cochran, right, out runs Franklin’s Bryson Washington to the end zone for the eventual game-winning touchdown to clinch the Wildcats 35-34 win over Franklin to win the Class 3A Division II state championship. [Trevor Fleeman/ Press Pass Sports]For the first time in a longtime Canadian had to dig deep. They had to show their character, and believe in themselves that they were the best team in all of Texas.

In the end, it took everything the Wildcats had to gut out a dramatic, thrilling 35-34 win over Franklin to claim the University Scholastic League Class 3A Division II state championship that no one in AT&T Stadium in Arlington will soon forget.

The game was back-and-forth, it was frantic, both teams wore each other out for four quarters of this classic slugfest. The fourth quarter alone will stand in infamy. The last 6:34 of this contest saw two ties and three lead changes.

Franklin had worn down a vaunted Wildcat defense, hammering the football up and down the field. Trailing 28-21, the Lions reeled off 13-unanswered points highlighted by a halfback pass from Seth Spiller to Braden Smith giving Franklin its first lead, 34-28, with 1:02 remaining.

However, a key moment came on the extra-point when Seth Shamblin hit the upright, missing the kick.

“When they missed that extra-point, that was huge,” Canadian head coach Chris Koetting said. “We felt like that gave us new life.”

Franklin kicked a pooch on the ensuing kickoff giving Canadian the ball at its own 42-yard line with a state title in the balance, and three timeouts with 1:02 to play. Quarterback Joshua Culwell and the offense went right to work. Culwell went on a run for six yards. Then on the following play, Culwell connected a deep to Reagan Cochran who hauled in the pass at the 20-yard line and sprinted his way in to tie the game, 34-34.

“We always try to keep a level head,” Culwell said. “I feel we were focused for that drive. The missed extra-point was a huge momentum swing.”

“Coach (Hayden) Merket said all week it was going to be a touchdown,” Cochran said. “He called the play, and it led to that. It feels incredible. This is a close senior class, and we left our legacy “

The final touch came on an extra-point that won’t be forgotten, by a kicker that will live in the Canadian record books decades to come. Edgar Salazar, the senior who holds the state record for point after attempts in a career, nailed his 340th and most important that gave the Wildcats a 35-34 advantage with 34 seconds left.

Franklin had one last chance but the Canadian defense made a stand getting a sack of quarterback Marcus Wade by Angel Garcia at midfield as time expired. 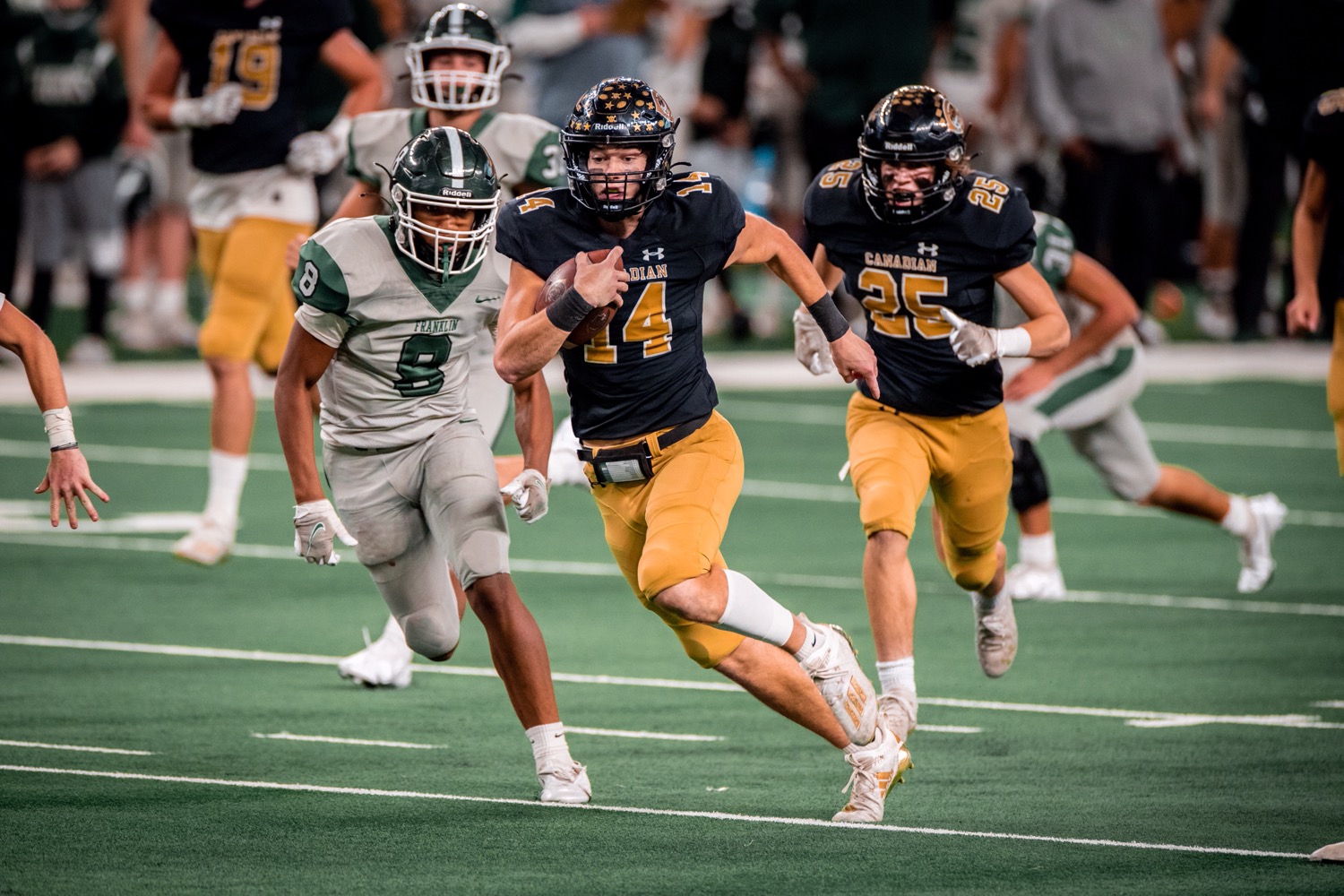 Culwell was named the Offensive MVP for another stellar performance. For a second straight week Koetting turned the senior loose to use his legs. Culwell was tough for Franklin to stop putting up 120 yards on 12 carries. Threw the air, the 6-foot-3 gunslinger torched the Lions for four touchdowns on 11-of-21 passing with 196 yards.

“This is a surreal experience,” said Culwell, who ended his season starting every game, throwing for 3,656 yards with a total of 52 touchdown passes. “It was a special experience, and a way for us to end it.”

Running back Hayze Hufstedler, playing in his second state title game in the last three years left his imprint on Jerry World. The bruising back left it all on the field one final time plowing his way for 153 yards on 23 carries, including a 47-yard touchdown run.

“I can’t think of any better way to cap my career off,” said Hufstedler, who finished the year with 1,968 rushing yards and 33 touchdowns. “It’s the best feeling.”

Though Canadian did have drop passes, made penalties, went against a Franklin offense that saw a run game to chew up 278 yards on the Wildcat defense, and piled up 456 yards on Canadian, it still found a way. Defensive coordinator Andy Cavalier says that’s all that matters in the end.

“Franklin is an excellent football team,” Cavalier said. “But we found a way to win it, and that’s what being on a team is all about. We just had to keep playing and we did.” 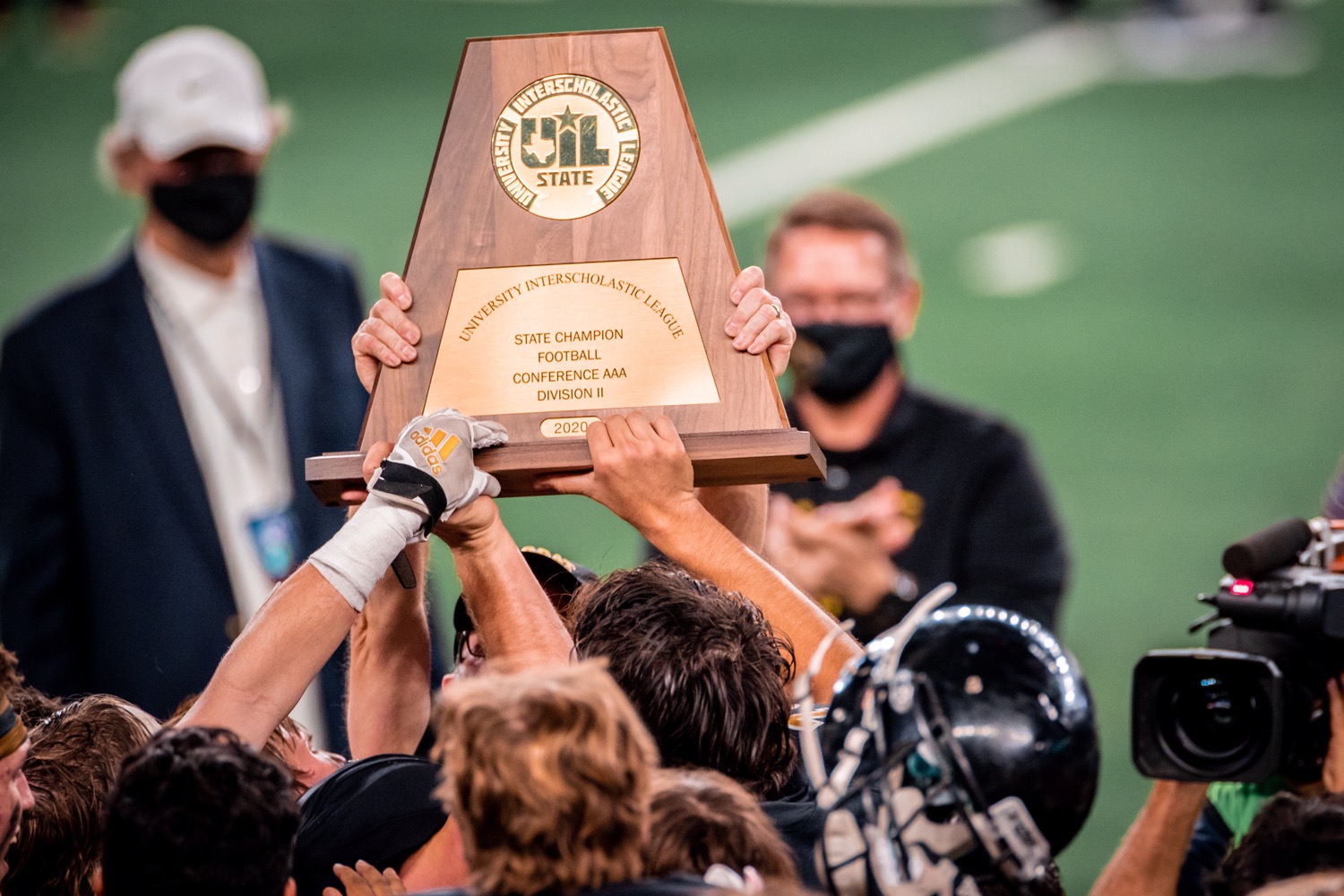 Canadian finishes its season 15-1 overall, beating Top-10 teams Childress twice, Idalou, Gunter and Franklin along the way. This is the Wildcats third state championship since 2014, and the fifth since 2007. Canadian also made Texas Panhandle history passing Amarillo High for the most titles in Amarillo-area history.

“It shows how much pride that goes into this program,” said Koetting, who is an eye-opening 143-18 in 11 years at the helm. “The players have always worked so hard. I maybe a little bias but we have a great coaching staff. I love everyone of them and their dedication to this school.”