Leaving Childress in a Hayze: Hufstedler runs Canadian back to state semifinal 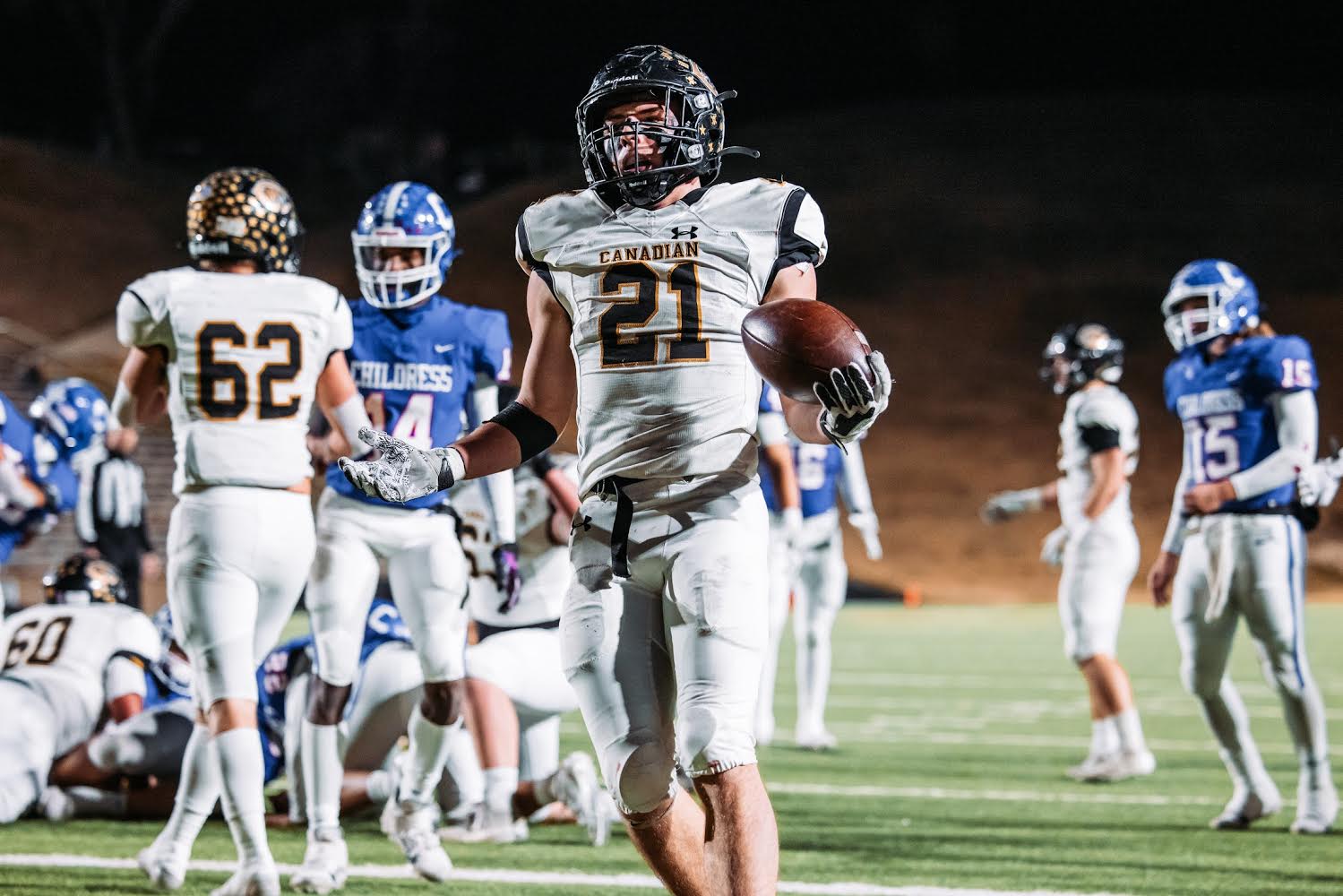 A team packing their bags for a Texas high school state semifinal game normally is a once in a lifetime experience.

But if your Canadian, well, it happens about as often as Christmas arrives.

Behind the shifty running of senior Hayze Hufstedler and a bending but not really breaking defense, No. 1-ranked Canadian advanced to its seventh-straight state semifinal appearance by handing familiar foe Childress a 45-14 defeat Friday night

This Class 3A Division II state quarterfinal game played out on Happy State Bank Stadium in Canyon, was much closer for a half than the 63-13 district win Canadian handed out to Childress a few weeks back.

“My hats off to Childress, they came here to win and it wasn’t easy,” said Canadian coach Chris Koetting. “It was just a hard-fought game by both teams.”

In fact, with just more than seven minutes to play in the half, Canadian led 17-7 when Childress junior quarterback/punter Collin Bishop pinned Canadian at its own 2-yard line on a punt.

Canadian promptly was called for a penalty moving the ball back to the 1-yard line.

Within seconds Canadian had landed a gut-punch to Childress that not only knocked the wind out of the Bobcats, it pretty much sealed the deal on this even one though a lot of football remained.

Hufstedler took a handoff, paused briefly, made a strong move inside, another move getting to the sideline and then was off for a 99-yard touchdown run with 7:07 to play in the first half.

“That was crazy,” said Hufstedler, who continued to put up crazy numbers Friday night running for 216 yards on 19 carries and scoring four rushing touchdowns. “It was just great blocking. I waited for a hole to appear and then bounced it outside. I had a great block on the outside by Gary (Anderson) and then it was just off to the races from there.”

Childress certainly didn’t give up on things

However, Canadian would build a 31-7 lead by halftime, then outscore the Bobcats 14-7 in the second half, the icing and final points a Luke Flowers 50-yard interception return with 10:15 remaining.

So when Hufstedler tied the record for longest run from scrimmage in Texas high school history, the Wildcats never lost control of this one.

“Nothing he does surprises me,” said Canadian coach Chris Koetting, his voice oozing respect. “He’s been doing it for four years and has had several long runs. That run for sure gave us some cushion. Because at that point I was thinking, man, this is going to be a battle to the very end.”

Canadian (13-1) rolled up 487 yards of offense with quarterback Josh Culwell joining Hufstedler has the main thorns in Childress’ side.

Culwell ran for 33 yards, completed 14-of-18 passes for 165 yards, connecting with Jake Krehbiel on a 15-yard touchdown just before half building the Wildcats lead to 31-7.

“I think Childress came out wanting some revenge and we didn’t really come out firing like we usually do,” Hufstdler said. “But hats off to Childress for a good fight.”

Childress ends its season at 10-3 and like Hufstedler gave Canadian some early fits.

The Bobcats, with head coach Jason Sims back in Childress dealing with COVID, for instance answered Canadian’s opening score of the game with a 13-play, 69-yard drive ending when Bishop found Lamont Nickleberry for a 10-yard touchdown on a fourth down play.

But it would be almost two full quarters later before Childress would add to the scoreboard, this time Bishop throwing a nice touch 18-yard TD pass to Devron Sims as time ran out in the third quarter cutting the Childress lead to 31-14.

That’s as close as things would get for the Bobcats.

Plus, Childress held the ball on a nearly seven minute drive to open the second half but didn’t score as the drive ended in a fumble at the Canadian 5-yard line.

Longtime Childress assistant Kirk Stephens said “we were able to move the ball but they are only good drives if you score. We did some good things out there and that 99-yarder by Hufstedler didn’t help. We had a really good year. That’s a good football team we played.”

Canadian moves onto to meet Gunter (13-1) in one of the most unique matchups in Texas high school football history. This will mark the fifth consecutive year these two teams have met in the state semifinals.

The time and the place of the game is yet to be determined. But not the intensity.

“We watch Gunter from week one every year,” Hufstedler said. “We are looking at there scores and I’m just ready to get out there and play them.”