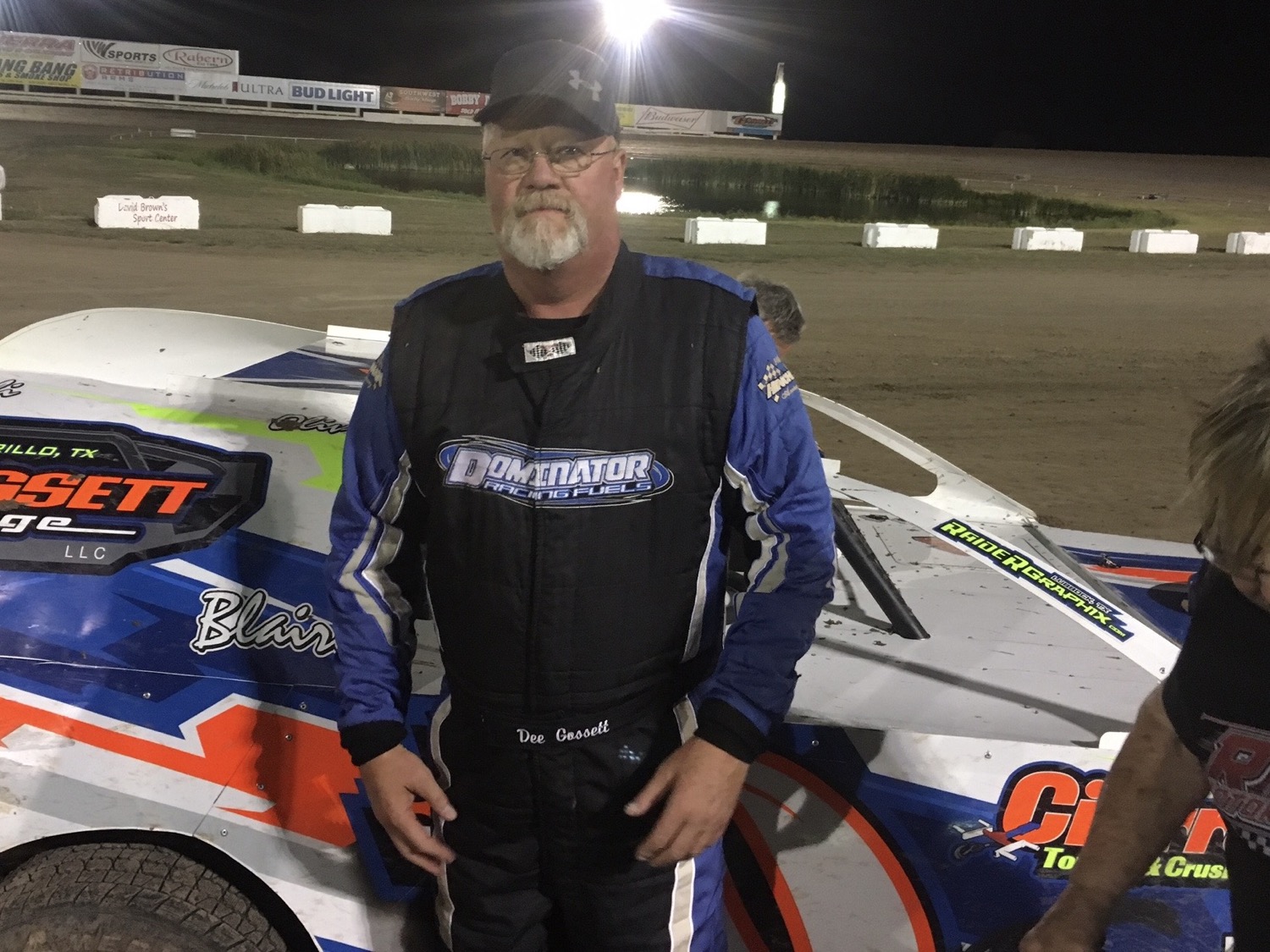 Amarillo’s Dee Gossett stands in front of his car after clinching the points title in the Modified class in the season finale Saturday night at Route 66 Speedway. [Lee Passmore/ Press Pass Sports]

There wasn’t much in the way of suspense to close the regular season during Saturday’s championship night at Route 66 Speedway, as it was more about making a statement for the track’s top drivers this season.

All six points leaders in their classifications heading into the season finale held their positions to clinch their championships and take home title trophies at the end of the evening. That made it more about pride than anything else.

Exhibit A for that was Amarillo’s Trey Hale racing in the Limited Late Models class. Hale took a 225 point-lead atop the standings into the evening and could have sat at home and still won the season points title.

But Hale revved up his motor again the he’d done every previous weekend this summer at Route 66 and cruised to another victory, punctuating his season points title with his 11th victory.

“I really didn’t plan on racing a full season,” Hale said. “This is probably the last season I’ve thought about running a full season and I did it for my grandfather. I wanted to keep it going.”

Hale was about as sure a thing as there was to reach victory lane at the track this season, which based on history is no surprise. This was his second season title in the last three years at Route 66.

Saturday’s final race was probably as accurate a snapshot of Hale’s season as could be found. He stayed in the pole position, took the lead early and never came close to relinquishing it in the 20-lap event.

On the final night of the season, event sponsors offered cars at the front of the field $200 if they would move to the back row and an extra $800 if they came from behind to win, meaning Hale and the other points leaders had a shot at an extra $1,000. Hale opted to keep his spot.

“I worked real to get to this position to start on the pole,” Hale said. “It was really tempting to take that extra cash and go for it but I think capitalizing on an opportunity to get another win and keep that win streak going was important.”

Hale didn’t commit to racing a full season in 2022, but then again, he didn’t necessarily plan on doing it this year.

“I’ll probably race on and off next year,” Hale said. “I don’t think I’ll race every week. I’ve got a wife now and all that, and I think we’re just going to relax a little bit.”

The sponsors who offered the back row challenges to the season leaders ended up keeping most of their money. There were some competitors who accepted it, but none of them rallied to win in the finale.

One of those was veteran Amarillo driver Dee Gossett, who held a 48-point lead in the Modifieds, which was the last event of the night. Gossett accepted the challenge and went to the back row, finishing fourth on the night but still holding on to the points championship.Another Amarillo driver, Robert Layton, opted to do the same thing in the Street Stocks, as he held an insurmountable points lead heading into the evening. Like Gossett, he didn’t win the event but held on to the points title.

In other classes, Lubbock’s David Luckie held on to win the points title in the Winged Sprints, as did Slaton’s Cory Williams in the Limited Modifieds and Panhandle’s Kylee Kowalweski in the new Tuner class.