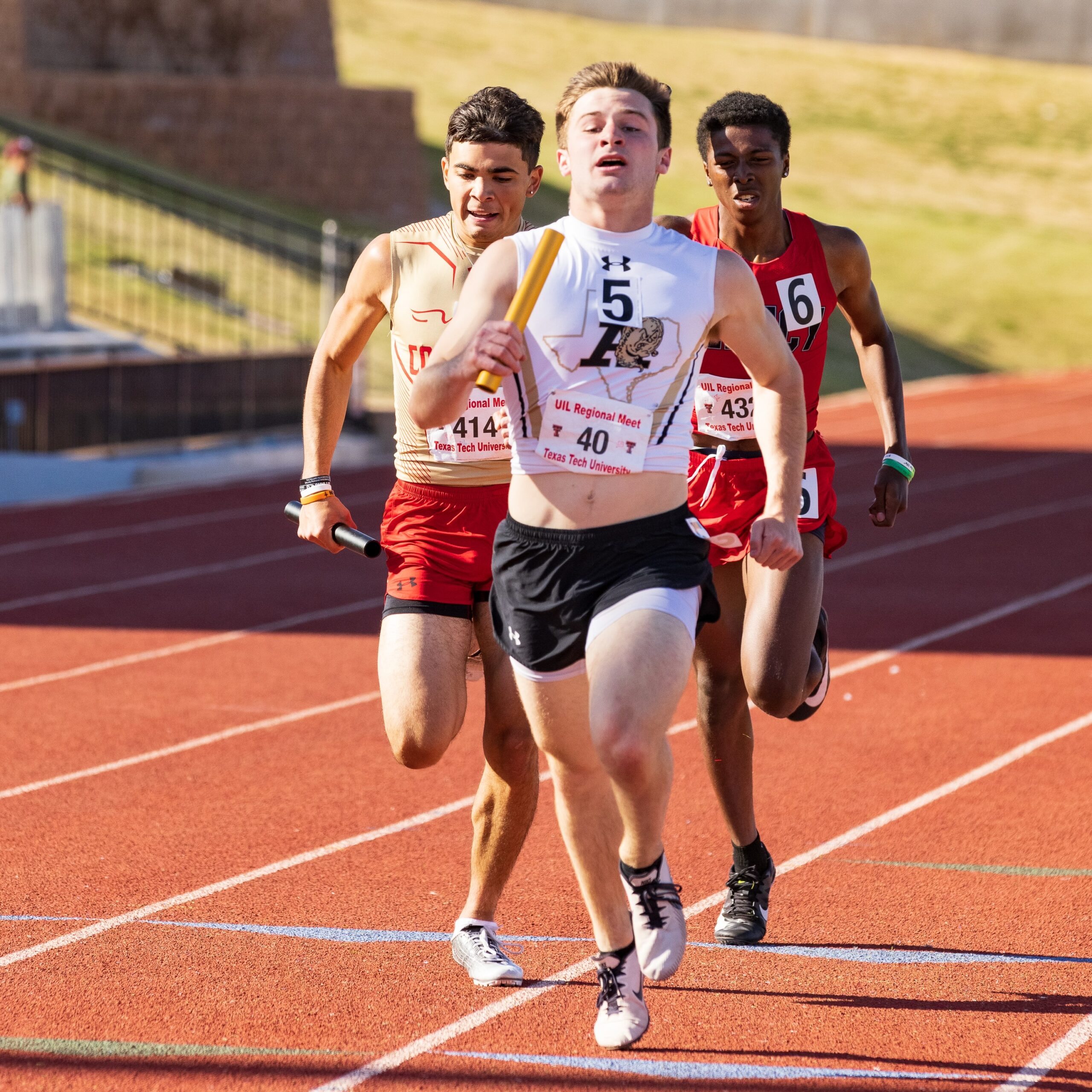 Sandie senior Thomas, with a state meet berth on the line as the top two teams qualify, not only put the Sandies in the prestigious UIL Texas state track meet, he crossed the finish line first with a jaw-dropping effort that saw him pass the final two runners down the stretch by daring to go inside rather than slide outside.

“He found a crease inside,” Bergeski said. “It was super impressive.”

A video of Thomas’ anchor leg effort circulated on social media being viewed more than 10,000 times.

“Obviously, it was a really exciting race and after I was super excited for us to be able to go to state,” Thomas said. “The video is great and all. But it was time to get back to work as soon as we finished and get that one goal we have in mind. That’s to get that gold medal.”

For Thomas, running bases, not running around a track, was certainly in his future entering high school.

“Really, it was my freshman year when my passion for track started,” said Thomas, also a standout football player in the AHS secondary. “I stopped playing baseball and concentrated on track and made varsity my freshman year. We went all the way to regionals. That’s when I kind of knew track was one of my best sports. Being able to get on the track it’s you verse yourself. That’s something I really liked.”

Watch Thomas on a football field, running in track, or listen to his coaches talk about him, and the words fierce competitor slaps you in the face over and over.

Thomas said the juice to compete with high passion arrives simply from growing up a Thomas. That meant older siblings, a dad Bart who was an all-state quarterback at White Deer played college football at Texas Tech, and an uncle Zach, who starred at Tech and for the Miami Dolphins as a linebacker.

“Definitely being the youngest sibling, and you know how you kinda get bullied around your whole life, it made me a little tougher,” Thomas said. “My parents are super competitive, as well. I think it’s just a little bit of a mix.

“I am very thankful for growing up like that, now. At the time I probably didn’t like it so much but it’s turned me into a whole lot better person, and a whole lot more competitive person as well.”

Bergeski said AHS coaches have known a long time Trey’s heart beats one way when’s he is on a track.

“We have known since Trey’s sophomore year going all out has been his personality,” Bergeski said. “He is just one of those kids where it doesn’t matter what race he is doing, it doesn’t matter what leg I stick him at on a relay, he is going to go compete. You know when he has the baton, or is on the track, that regardless of the situation and regardless of the elements, you know you are going to get his all-out effort to win every time.”

Friday evening will mark Thomas’ second appearance at state. He first was as a sophomore on the AHS bronze medal winning 1600 Relay.

Of course, last year COVID-19 forced cancellation of the state meet. Even though it’s been two years, Thomas said his state experience will help his confidence Friday and he will pass it on to his relay teammates.

“I was in the same boat as them as a sophomore,” Thomas said. “I was super nervous. I’ll just try and comfort them and let them know this our time to shine. You have to feed off the crowd and feed off the nerves. That plays a big role once you get down to Austin.”

Before Thomas anchors the Sandies 1600 Relay in the final race at 9 p.m. Friday, he will run the 300 hurdles a little more than an hour before.

Thomas will face a staked field in the 300s featuring junior Kendrick Smallwood of Mesquite Poteet. Smallwood owns the fastest time in the country and qualified in a dizzying 36.81.

Thomas says he respects anybody who can run in the 36s but won’t back off. He has learned one thing about the 300 hurdles race during his high school career. It’s going to hurt. And he loves every bit of that feeling.

“I definitely thrive on the chance to run against (Smallwood),” Thomas said. “I look at it as an opportunity. Because it’s not every day you get to run against a kid that is number one in the nation. I’m looking at it as an opportunity to show my abilities being from a smaller town in West Texas. Those metroplex schools are kind of used to it. I want to go down and there and show them what I’m about.

“The biggest reason I chose this race is the 300 hurdles, well, it’s kind of a grindy race. There’s not a lot you can do in this race if you aren’t willing to compete a little bit and have to hurt after the race. I’ve always kind of embraced that and used it to my advantage. A lot of kids, they can get the through the hurdles easily and then die out. It’s not like that when you are running the 300 hurdles. You get to that last straight-a-way and it’s who wants it more.”

“This race all about getting over that next hurdle and competing inbeteen hurdles and seeing what I can do,” Thomas said. “I definitely want to get out a whole lot out faster than normal. I want to make sure and not studder over any hurdles. And then I’m going to alternate legs this week and see how that goes.”

Bergeski has seen enough of Thomas to know one thing is for sure Friday night, look for a fantastic finish.

“Trey will run his best when everybody else is running their best,” Bergeski said. “Those hurdles, he’s right. You just have to go. When he runs that race he just attacks those hurdles. If he can keep it close with the kid who has run the 36, it’s going to be a heck of a finish. He knows this is the meet you want to be running your best at. He’s been setting himself up for this all year.”

Thomas and Bergeski are also looking forward to the 1600 Relay. Bergeski said Thomas has been a leader of the group all season long. And, Thomas said he and his Sandie teammates are motivated to bring back gold for many reasons.

“Trey made this trip to Austin as a sophomore,” Bergeski said. “Him being able to perform on that stage as a sophomore you knew you had something special.

Said Thomas: “We are going in with a big chip on our shoulder and a target on our chest. It’s not often Amarillo High comes in with the No. 1 seeded time in a relay. It’s all within like .5 seconds so it’s going to be a dogfight. I’m excited to get down there and show what Amarillo High is all about.”

Thomas said making the medal stand is the goal of he and his teammates. However, Thomas said they wouldn’t have the chance to dream if not for a special group at AHS.

“I’ve loved my last four years at Amarillo High,” said Thomas, who has been offered Division I track scholarships and will decide on his future later this month. “The coaches I’ve had have been the biggest blessing in my life. Not only am I trying to get a gold medal for myself and my teammates, I also want to get one for my coaches. Because their hard work kind of goes unnoticed at times. They are the ones at the weight room every morning at 5:00 and 6:30. If we can bring home a gold medal that would go down in history for those coaches, for sure.”

When Thomas crosses the finish line ending the 1600 Relay it will also end his career as a Sandie.

“I know that’s what has been motivating Trey lately,” Bergeski said. “You don’t always get that opportunity to run at the state meet. It’s a blessing to get to do it your senior year and your last race. Heck, he has two of the biggest races in the entire meet. I know he’s ready for it and we are leaning on him to calm everybody else down, too.”

Thomas said of course his last high school race will bring out the emotions. But it will also bring out what he has been known for his entire AHS career, like when receiving a baton in fourth place as the anchor leg in a regional meet – a fierce competitor.

“I’m going all in,” Thomas said. “This is the last time in a Sandie uniform I’m going to make sure I go all out and try to bring back a gold medal to Amarillo. Because they deserve it.”