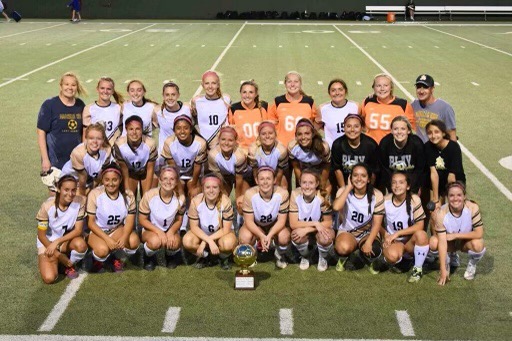 For the first time in program history Amarillo High will play in a Region I-5A final, just one game away from the University Interscholastic League Class 5A state semifinals, after blanking Burleson Centennial, 3-0, in a regional semifinal at Memorial Stadium in Wichita Falls on Tuesday night.

“We’re a team on a mission,” said AHS head coach Stacy McPherson, who has guided this program for 22 years. “This means everything to us. Coming from Amarillo High where basketball and volleyball are so talented, this is monumental, and I hope can really promote soccer in our school. This team is just so special. They work hard, they play together so well as a team. It’s amazing to see it all pay off.”

On an extremely windy evening in Wichita Falls, the Lady Sandies had their backs against the wall playing right into the wind in the first half. The goal for McPherson’s team was to play defense, and limit the Lady Spartans (21-4-1) offensive opportunities. The contest stayed scoreless through half, and in the second half, with the wind at their backs the Lady Sandies offense turned it up to another level. Lily Sobey broke the with the games first goal on an assist from Nicole Gray giving AHS the lead for good in the 54th minute. Moments later, the Lady Sandies tacked on much needed insurance thanks to Mollie Ferro finding the back of the net off an assist Viviana Gomez at the 64 minute mark.

“Burleson was a lot like Lubbock Coronado,” McPherson said. “We knew they’d be very physical, and playing against the wind we knew we had to play possession soccer. But in the second half we played on another level. I’m just so proud of this team.”

Sobey tacked on her second goal of the second half on a free kick in the 71st minute to make it 3-0 AHS, while goalie Syndey Williams was strong in the net making five saves.