Lady Buffs take down No. 13 LCU 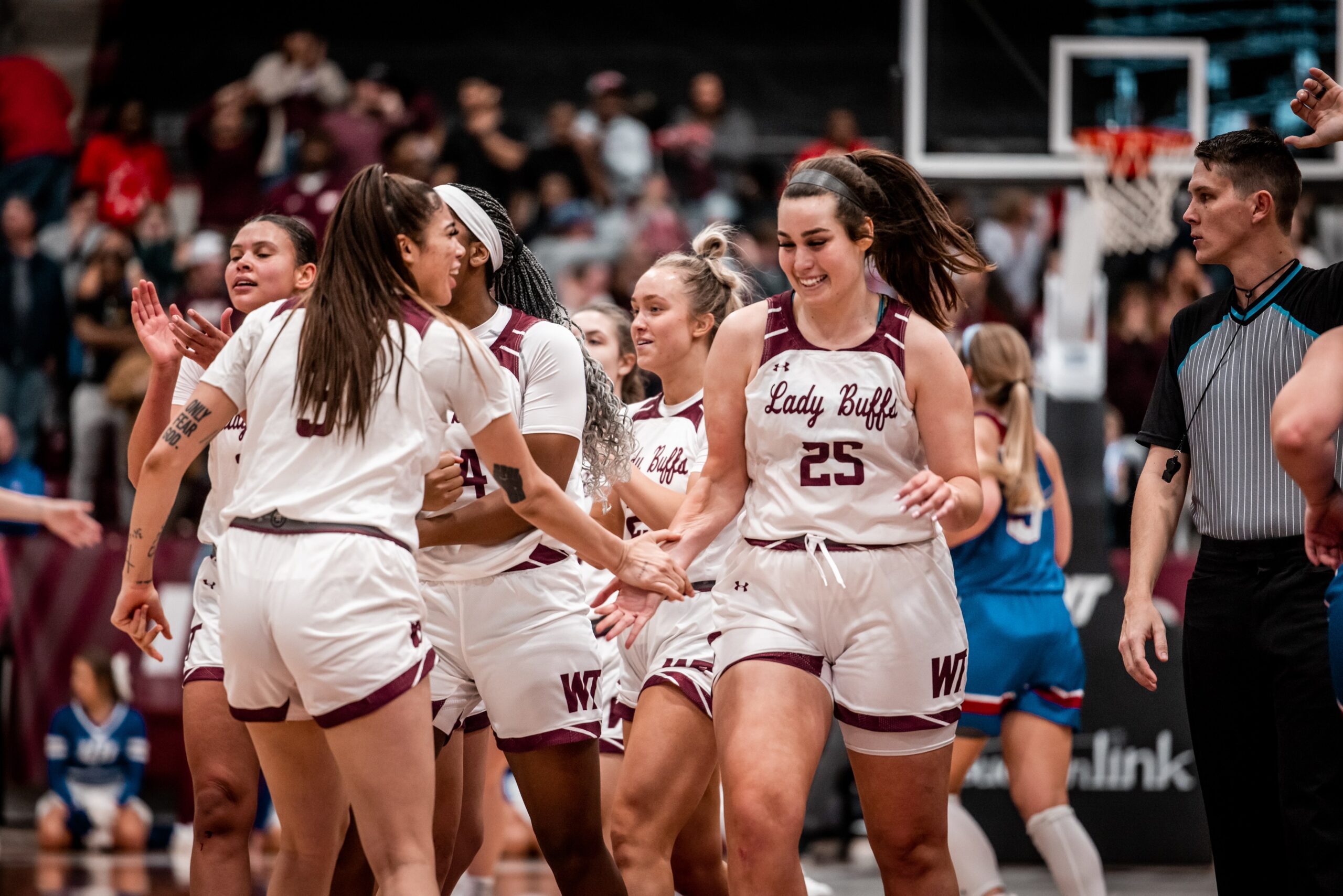 West Texas A&M post player Madison Kast (25) is all smiles after hitting a clutch 3-pointer late in the game that lifted the Lady Buffs past No. 13 Lubbock Christian 55-48 in a Lone Star Conference game at the First United Bank Center on Thursday night. [Trevor Fleeman/ Press Pass Sports]

West Texas A&M picked up timely buckets down the stretch to pull away from I-27 rival and No. 13 Lubbock Christian 55-48 in a very exciting contest in front of an electric crowd of 2,200 at the First United Bank Center on Thursday night.

This Lone Star Conference clash had everything fans wanted to see. There were 12 lead changes, nine ties with WT leading for over 19 minutes throughout.

The Lady Buffs needed this victory improving to 15-9 overall, while pulling into a first place tie atop league at 8-2. The defending NCAA Division II national champion Lady Chaps fall to 20-5, 9-4.

“This win really helps out when it comes to the South Central Region, and what we want to accomplish,” WT Head Coach Joshua Prock said. “It also puts us in the mix for a regular season championship. But to beat a team a caliber of LCU is huge. They don’t beat themselves, and an extremely well coached team. I’m just so proud of how we played to go take this game from them.”

This back-and-forth action came down to the final minute, and saw an unsung hero in junior

Madison Kast. Kast scored 11 points on five consecutive trips down the floor in the fourth quarter as the Lady Buffs that gave the Lady Buffs enough in the end.

The biggest moment came in the final 70 seconds. LCU freshman and Childress graduate, Grace Foster, knocked down a 3-pointer to cut the WT lead, 49-48, with 1:08 to play. After a timeout, the Lady Buffs went to Kast who popped open at the top of the key answering with a clutch 3-pointer with only 40 seconds remaining that put WT up 52-48.

“We continue to encourage Madison,” Prock said. “We’ve told her that her time was coming, and It came in a hurry. What an answer to make that basket. Grace (Foster) had given them momentum, and Madison gave it right back to us.”

WT point guard Zamorye Roberts had a game-high 17 points, including all 11 of the Lady Buffs points in the third quarter. Roberts was also 4-of-5 from beyond the arc.

Foster continues to impress in her first season as a Lady Chap scoring 12 points all in the second half. Senior and Stratford graduate, Laynee Burr, had a team-high 13 points, and Canyon graduate Channing Cunyus tallied six points with eight rebounds.

LCU All-American and Nazareth graduate, Allie Schulte, was held out of the game with an injury.

Previous articleH.S. Boys basketball standings for Feb. 10
Next articleSecond half surge gets No. 3 LCU past Buffs in LSC showdown