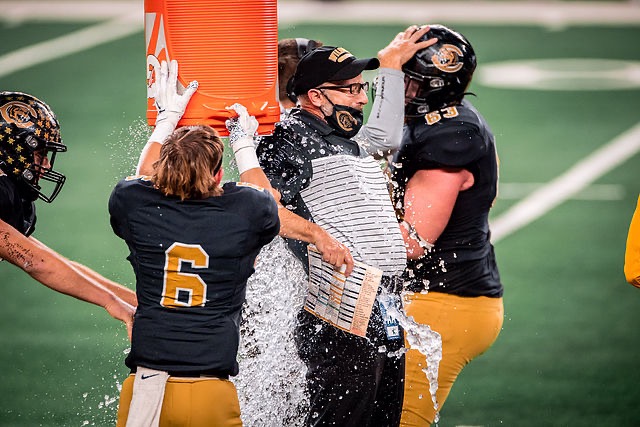 Canadian head coach Chis Koetting has 144 wins which is the most of any active head football coach in the Texas Panhandle. [Trevor Fleeman/ Press Pass Sports]

Chris Koetting was about age 6 when the football bug first bit him. It has never let go.

There he sat in the stands with his dad, Bill, watching the Groom Tigers (Bill’s high school alma mater) take on the mighty Big Sandy Wildcats in the 1975 Class B state championship game.

Big Sandy won 28-2, closing its dominating season with a state-record 824 points, and allowing only 15 points scored. Lovie Smith (NFL head coach) was a defensive end for Big Sandy, and David Overstreet (who went on to star at Oklahoma) was the dazzling running back.

“I had never seen anything like it,” said Canadian’s Head Coach Koetting. “Lovie Smith and Overstreet. I was like ‘Dang, this is awesome.’ That was the one that hooked me on football.”

This week, Koetting enters his 12th season as Canadian’s head football coach, coming off a 2020 Class 3A Division II state championship. This was Koetting’s third state championship, and tied him with Amarillo High’s Blair Cherry (1934-36) as the only Texas Panhandle coaches with three state football titles each. Koetting owns a flabbergasting overall record of 144-17 (0.894 winning percentage).

Koetting enters 2021 having not only completed one of the great decades of winning in Texas high school football history, and not only owning a 43-game district winning streak dating back to 2012, but with the same passion and love of football that landed him in Canadian as an assistant coach under Kyle Lynch in 2003.

An assistant coach at Hereford in 2003, Koetting didn’t know the former Canadian ISD head coach and superintendent, Lynch, when he called. “I was in the backyard in Hereford, doing something like working in the yard when my wife tells me somebody wants to talk me,” he said. “I get on the phone, and it’s Kyle. I knew who he was, but I had never talked to him before.” 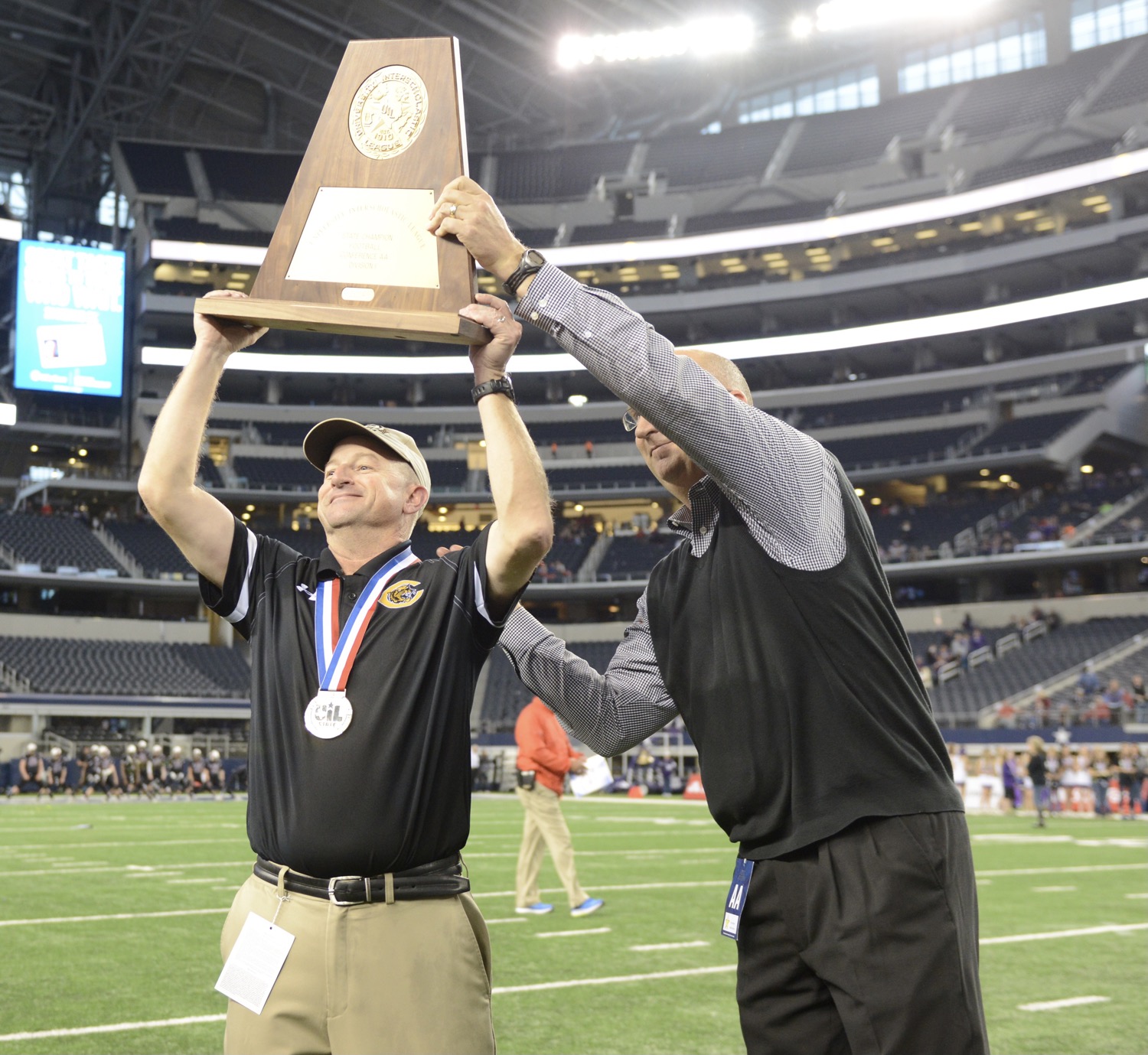 Koetting made the trip to Canadian for an interview. Lynch said it didn’t take long to know Koetting was a football junkie. He hired him on as his offensive coordinator.

“When we first interviewed, we did all the normal interview things. Then he and I both got on the board because we both loved talking football,” Lynch said. “When we got on the board, I knew right away his knowledge of the game was so great. He had the expertise.”

“The second thing is that this guy loves football like no one I’ve ever seen,” Lynch continued. “Myself, I really have a passion for football. But no one loves the game of football like Chris. I’ve never seen anything like it. Whether it’s in season or out of season, it’s like nothing I‘ve ever seen. So I knew, in that first interview, he was a guy who could help us get to the next level.”

Koetting said the decision to make the move from Hereford to Canadian was a tough one, but he couldn’t resist the chance to be an offensive coordinator.

“I had to wrestle with that decision a long time,” Koetting said. “I liked it at Hereford…I almost turned the job down. I’m obviously pretty glad I didn’t.”

With Lynch’s approval, in 2007, Koetting implemented the fast-paced, spread style that the Wildcats are famous for now. However, that offense was almost canned midway through Canadian’s state championship season in 2007.

“I think it was about game four,” Koetting said, “and we were winning, but we weren’t running it very well.”

“Kyle will laugh about this now, too,” he said, “but he came to me and said, ‘I don’t know about this offense.’ He said, ‘I’ll give you one more week, and if doesn’t work, we are going back to the old offense.’”

“We were playing Windthorst, and they had beaten us the year before and were really good,” Koetting remembered. “For some reason, it clicked, and we rolled up and down the field like we thought it would look like. We still weren’t great, but by the playoffs, we knew what we were doing. I would have never dreamed we would win a state championship, because we were picked like third or fourth in our district.”

Today, it’s a Canadian staple and a defensive coordinator’s nightmare, watching the Wildcats’ offense in hurry-up mode. Canadian has earned statewide respect for its football prowess.

Former star Canadian players Ben Arbuckle, Braiden Galla, and Tanner Schafer say playing for Koetting, who became the Canadian head coach in 2010, is life-changing. Arbuckle is an assistant coach at Western Kentucky, and was one of Koetting’s first quarterbacks as a head coach, playing from 2010-2013.

“Looking back seven years ago, playing for Coach Koetting was the honor of a lifetime,” Arbuckle said. “Getting to know him more as a friend, now, has really opened my eyes to the actual love and concern he has for the well-being of his players. And that ties in to what makes him such a great coach.”

“Those kids will fall on a sword for him because they know he would do the same for every single one of them,” Arbuckle said. “What he teaches us is what prepares us for the real world. Hard work, honesty, selfless service, humility, and seeking opportunities to lift others up. Those are things that I and many more have learned from Coach Koetting that have prepared us for the real world.”Braiden Galla is an assistant coach at Seminole High School, who starred for Canadian at wide receiver and in the secondary from 2011-2014.

“Koetting’s coaching means that every Friday night, you know you’ll get everyone’s best effort,” Galla said. “He has a way of getting kids to compete at their highest level no matter the circumstances. You know they will represent Canadian with class and respect, as well.”

“As a player, fan, and supporter,” Galla said, “that’s all you can ask of a team. He and his staff are a tremendous blessing to the community. I am proud to say I got to learn and grow from Coach Koetting, and I know I can speak for every other player that has played for him.”

“Playing for Coach Koetting is one of the main reasons I am where I’m at today,” Galla added. “He taught me so much as a player and as a man … One thing I will always remember after our state championship game in 2014, in the locker room he said, ‘Don’t let this be the highlight of your life.’ That’s who is he. He cares more about the life lessons than the wins and losses.”

Koetting said he would be a lousy coach if all he wanted out of his players were wins.

“I feel like if all you did was teach somebody to be a great football player and that was it, you failed,” Koetting said. “It’s very important for us coaches at Canadian to teach them something that will make them better down the road as a person. If you aren’t doing that, you are failing.”

Tanner Schafer played quarterback at Oklahoma for five years and is currently an assistant coach at Oklahoma University. Schafer’s name is cemented in Canadian football lore for never having lost a start at quarterback for the back-to-back state champion Wildcats in 2015-16.

“Koetting’s coaching has added another level of charisma to Canadian,” Schafer said. “People look forward to the season and know that the team will be prepared. Regardless of who graduates, Koetting finds a way to win.”“Playing for him was a blast,” Schafer said. “He expected the best from you every day but also made the game fun. We were also fully prepared for every game, and there were never any questions about if this or that would work. What makes him such a great coach is his ability to connect with all players and the simple fact that he loves coaching. It’s hard to be great at something you don’t enjoy.” 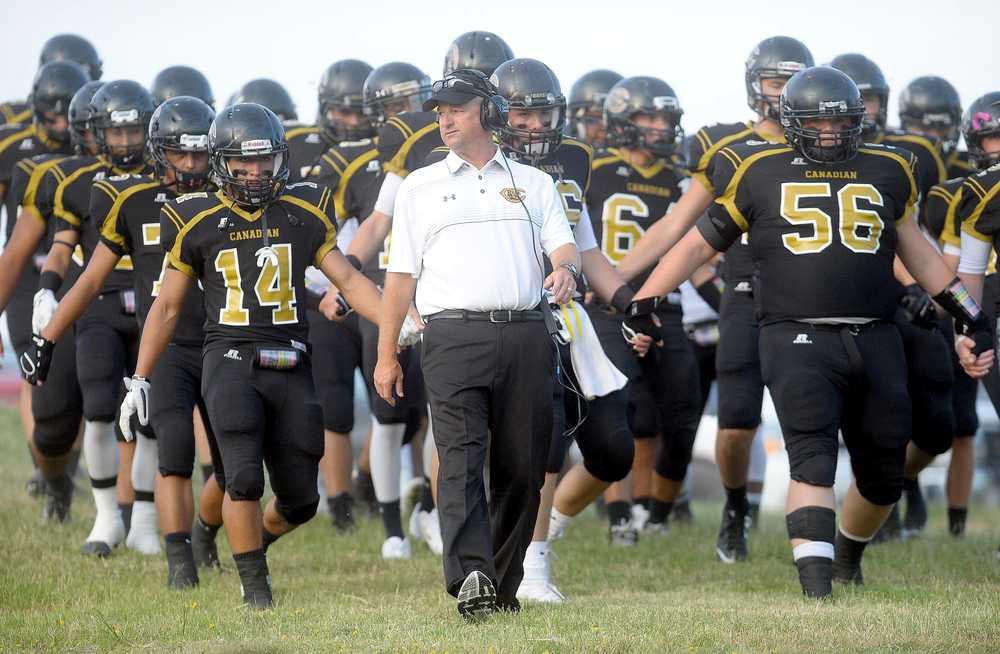 Koetting clicks off name after name, and praises the knowledge and joy of the game he learned from coaches, ranging from his playing days at Panhandle High under Stocky Lamberson to his previous assistant coaching stops at Perryton (two years), Lockhart (eight years), and Hereford (one year).

His praise goes to whole new level when talking about his current staff and their excellence, along with the chance Lynch gave him.

“Our staff at Canadian, oh man, they are incredible at what they do,” Koetting said. “And then Kyle, I owe so much to him. I learned so much from him.”

When Koetting was first named head coach in 2010, a Canadian resident was one of the first to greet him. Koetting wasn’t naming any names, but he remembered the conversation. “He came up to me and said, ‘I hope they aren’t setting you up to fail.’” “I said, ‘Well, thanks for the endorsement.’ My main worry was to not mess this up.”He hasn’t. Says who? Says two-time state champion football coach Lynch.

“Oh, my gosh, those numbers,” Lynch said. “You start stacking up great coaches—not just in the Panhandle, but in the state—and start looking at winning percentage, and Chris gets up there in a hurry.”

“It took a while for me to come to grips,” Lynch said, “but that dude is just way better than me.”

Koetting usually coaches from the sideline wearing his glasses and a heavy sweatshirt, looking more like a scholar than a coach. It works.

To a person, Canadian players and coaches rave about Koetting’s humble nature. He is remarkably six wins away from winning 150 games, before losing 20.

Expect this to continue for a long time in Canadian.

“I’m still having fun,” Koetting said. “When it stops being fun, I stop coaching.”