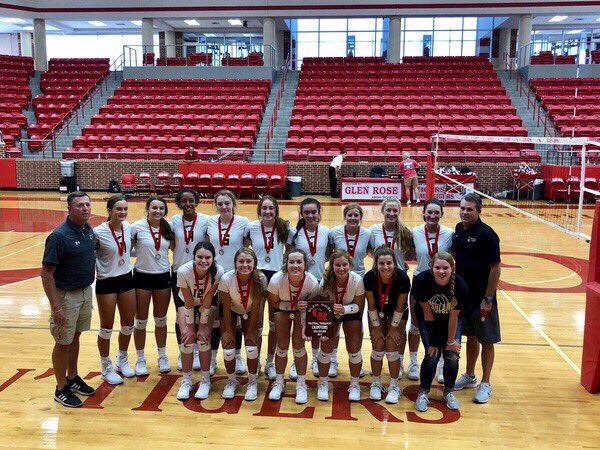 It was a great weekend for the Bushland Lady Falcons at the Glen Rose Tournament.

On Friday’s opening day, head coach Jason Culpepper claimed his historic 600th win thanks to his team sweep of Ponder.

From there, Bushland rolled with that momentum beating Lorena, 25-16, 25-16, in Saturday’s championship to claim the title.

The Lady Falcons (17-1 overall) were a perfect 8-0 in the two days as Berrilyn Boydston MVP honors.

Boydston made a combined 109 digs over eight games and 2 aces while teammates Ansley Sims and Kinley Rudder were named to the all-tournament team.

The Amarillo High Lady Sandies had the best showing at the Byron Nelson Tournament.

AHS (8-7 overall) went 6-3 and won consolation of the Silver bracket.

Hereford went 4-4 in the tourney and are now 8-9 overall.

It was another successful tournament going 7-2 in Forth Worth. Senior outside hitter Zoe Parker was named to the all-tournament team. Parker knocked down 45 kills over the nine games.

Both Canyon and Tascosa played good volleyball in Metroplex tournaments. At the Granbury Tournament, the Lady Rebels went 6-3. The Lady Eagles ended up 4-4 at the tourney in Allen.

Previous article5 Texas Panhandle contenders for Jerry World
Next articleOffensive minded: The Buffs could be LSC contenders if the offense takes a leap