Happy holds off Valley in thriller 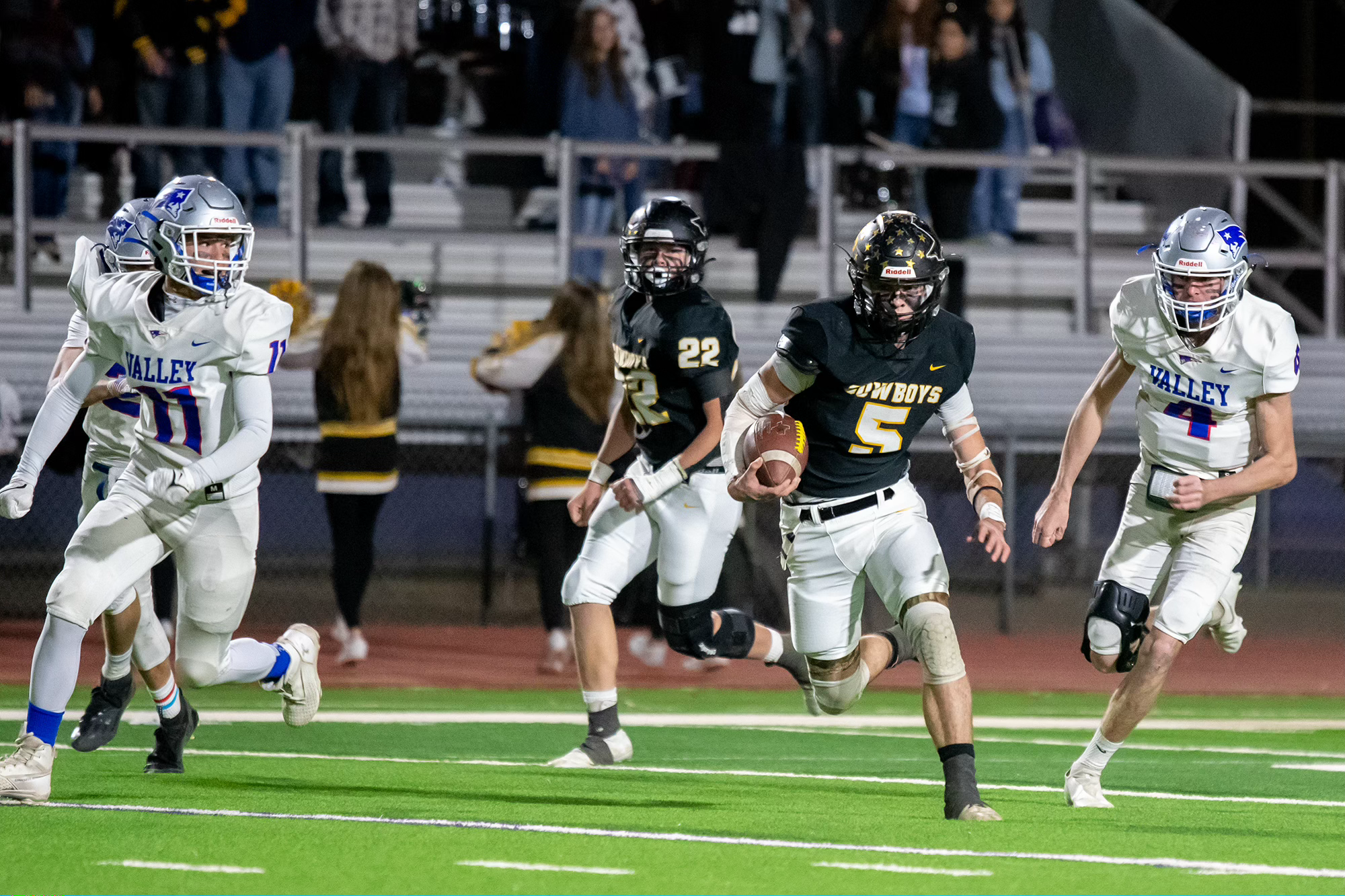 Happy’s Pace Bressler finds running room against Valley during a Class 1A Division I state quarterfinal contest in Dimmitt on Friday. [Larry Martinez/ Texas 1A Fan]

In a hard fought battle between district rivals, the Happy Cowboys squeezed by the Valley Patriots 38-36 to capture a thrilling Class 1A Division I state quarterfinal game in Dimmitt Friday night. Despite being outgained and behind on the turnover margin, Happy took advantage of big plays with clutch defensive stops down the stretch to seal the victory.The Cowboys led at the half, 22-12, but it was Valley who answered the bell to begin the second half. The Patriots scored on both possessions in the third quarter capped off by a third score on the night from running back Jaxon Edwards from 16-yards that gave Valley a 28-22 advantage. With Happy driving early in the fourth, Gunnar Bowles picked off Pace Bressler at the Valley 11-yard line. The Patriots then marched down the field for a score courtesy a Corbyn Standlee to Parker Hartman 22-yard strike to extend the lead, 34-22. The Cowboys answered right back on a Camden Sperry to Pace Bressler pitch and catch of 29 yards as Happy cut the deficit, 34-30 with 4:48 remaining. The Cowboys held Valley on downs, then TS Bow broke loose scampering from 38-yards for a touchdown to put Happy back on top 38-34 with 2:11 remaining. After holding the Patriots again, Happy tried to run out the clock but an errant toss on third down left Happy at its own 2-yard line. Head coach Stacy Perryman elected to take a safety with thirty seconds remaining. That gave Valley one last chance but a Standlee pass at the buzzer sailed incomplete as Happy (10-3) moved into the state semifinals against Westbrook (9-4) at a time and place to be determined.Bressler and Bow combined for 192 rushing yards and a score. Camden Sperry finished the night going 7-of-10 for 131 yards and four scores with Bressler grabbing two those for 80 yards. In the loss, Edwards was sensational finishing with 136 yards on 21 carries and 69 yards receiving.