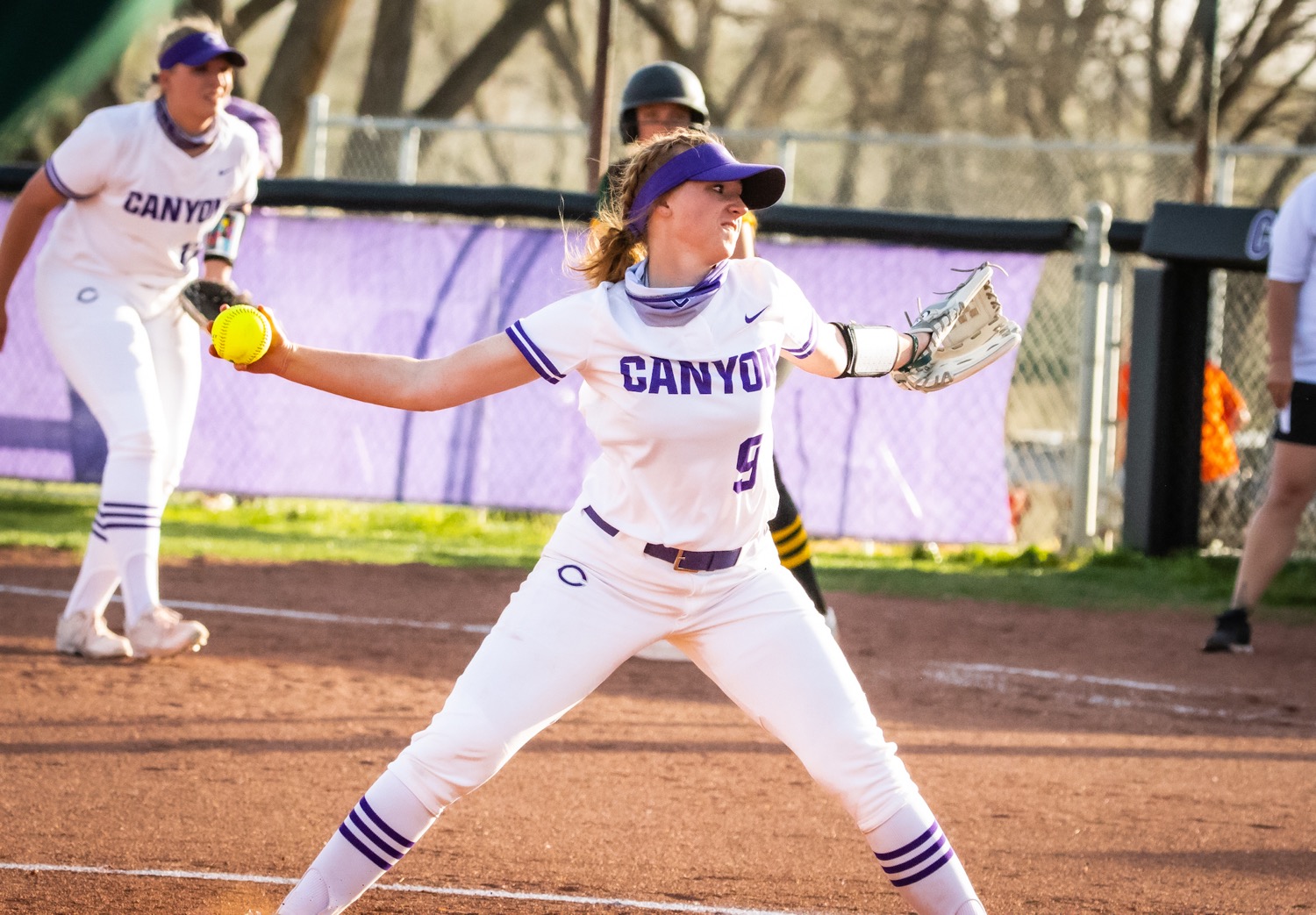 Canyon’s Kylie Knowles delivers a pitch against Pampa during a District 4-4A clash at Conner Park in Canyon on Tuesday evening. [Ben Jenkins/ Press Pass Sports]

Canyon made two first inning runs stand up to hold off Pampa 2-1 in a pitchers duel for a key District 4-4A win Tuesday at Conner Park in Canyon.

The Lady Eagles did their scoring all in the first inning. Mikaela Gilliland brought home the games first run with a triple to bring in Isabel Padilla putting Canyon up 1-0. Moments later Berkley Bradley singled up the middle that plated Gilliland extending the advantage to, 2-0.

Pampa rallied in the top of the seventh with a run scoring RBI from Mackenzie Anguiano, cutting the lead, 2-1, however, Canyon hurler Kylie Knowles got out of the jam with a strikeout and pop fly out to end the game.

Knowles (10-5) was stellar in the circle for the Lady Eagles throwing all seven innings, allowing three hits, a run, and totaling 12 strikeouts.

The Dumas Demonettes picked up four runs in the top of the eighth that was more than enough for a hard fought 10-6 win on the road at Borger on Tuesday night.

With the game tied at 6-6 after seven innings, the Demonettes brought out the bats in the top of the eighth.

Melany Granados doubled to bring in a run, followed by a 2-RBI double by Galy Davila that made the difference.

Briana Vargas threw all eight innings to get the victory.

Tanley McDonald was highlight for the Lady Bulldogs with a pair of doubles with two RBIs.

Hereford scored 19 runs in the first three innings and never looked back for a 27-4 run-rule win at Perryton on Tuesday.

In a key District 3-5A clash, Randall used its bats to gain a 10-4 win against rival Caprock on Monday afternoon at the Lady Raiders Softball Complex.

At the halfway mark of district play, Randall (13-9-1 overall) stays in a first place tie in the league standings at 4-1 with Amarillo High. Caprock (7-6) falls a game back at 3-2.

The Lady Raiders opened the scoring by plating two runs in the first, added a three-run inning in the fourth, and closed the game out by scoring four runs in the bottom of the sixth.

Heaven Moreno highlighted the afternoon for the Lady Raiders going 3-for-4 at the plate with two doubles, tacking on a game-high four RBIs.

Caprock’s Aliyah Alaniz went 2-for-4 with a solo home run.

Danae Lopez put on a career offensive performance that led Amarillo High to a convincing 21-1 run-rule rout of crosstown rival Tascosa on Monday afternoon at the Lady Rebels Softball Complex.

Lopez, a freshman who had yet to hit a homer all season, crushed three home runs on a 4-for-5 outing, driving in a game-high six RBIs.

Tessia Guzman added to the victory going 3-for-4 including a long ball of her own, a double, and driving in three runs.

Sammy Briones and Madison Martinez both combined on a five-inning no-hitter as the Lady Bulldogs blanked Palo Duro, 11-0, at home Monday night.

Briones handcuffed Lady Don hitters, throwing four scoreless innings without allowing a run, and rolling up 10 K’s. Martinez worked a scoreless fifth by striking out all three hitters she faced.

Offensively, Martinez even drove home two runs on two triples in the contest.