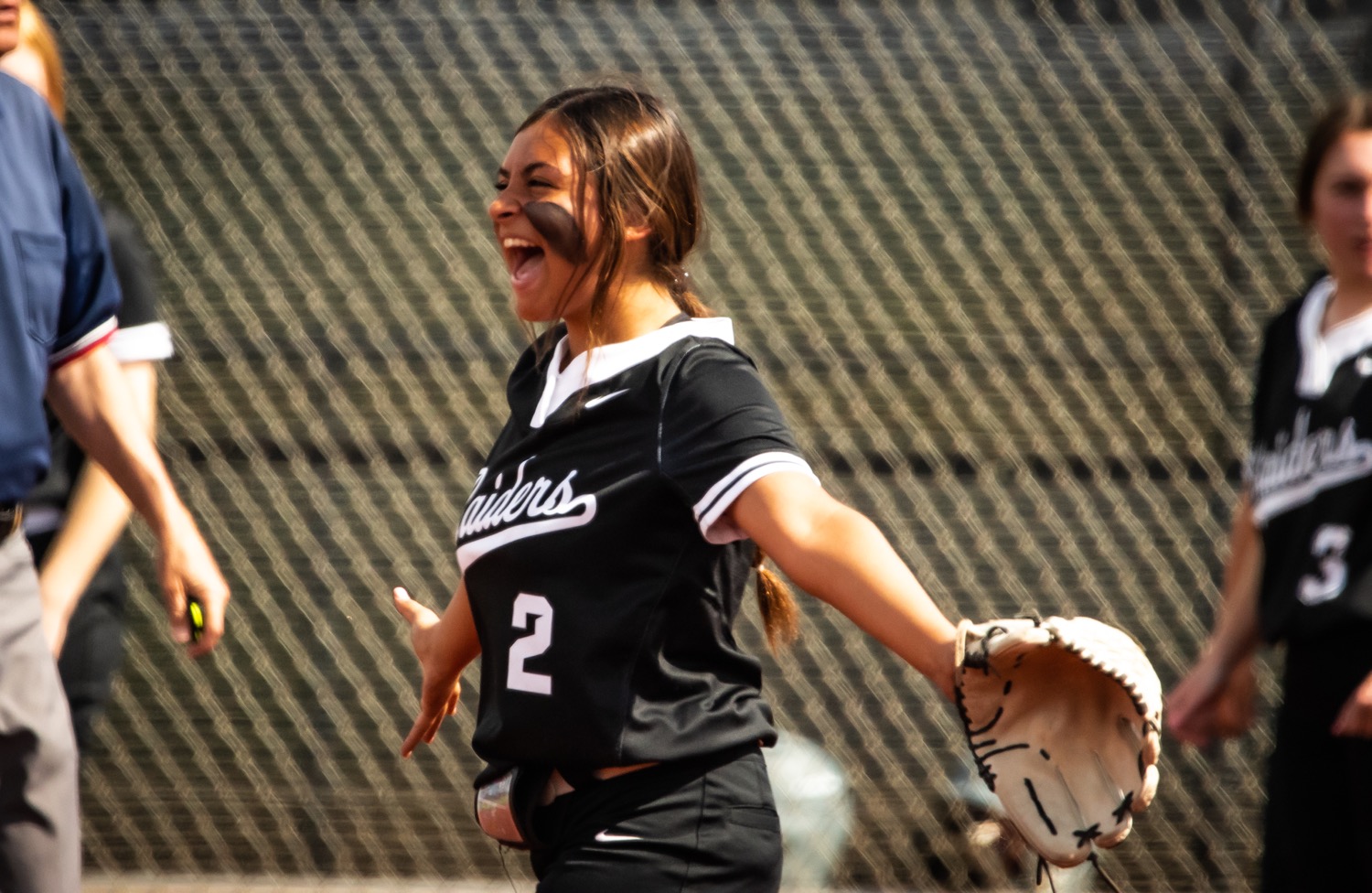 Randall pitcher Heaven Moreno celebrates during the Lady Raiders 13-1 win against Caprock to claim second place out of District 3-5A at the CHS Softball Complex on Friday. [Ben Jenkins/ Press Pass Sports]

Just like the first meeting, Randall broke out the bats in a big way never allowing Caprock into the game to run away with a 13-1 run-rule win in a key District 3-5A clash at the CHS Softball Complex on Friday.

Anberin O’Dell feasted on Lady Longhorn pitching leading Randall to its big win. The sophomore was a perfect 4-4 for at the plate delivering a 3-run homer in the top of the fourth, and a 2-run double in the top of the third. O’Dell finished with a game-high six RBIs in the game.

Those runs were more than enough for Heaven Moreno in the circle. Moreno baffled Caprock hitters scattering five hits over five innings, finishing with a pair of strikeouts.

Amarillo High made history Friday winning the programs first ever District 3-5A championship in shutout fashion, 11-0, against rival Tascosa at the AHS Softball Complex.

Head coach Ty Hoobler and his team finished 8-2 in district to claim the prestigious title and 13-9 overall. AHS will be the No. 1-seed heading into the postseason.

Tatem Pendergraft will go down as the pitcher of record that led the Lady Sandies to their first ever district title. Pendergraft was stellar through six innings of work allowing only three hits with four K’s.

The sophomore also went 1-3 at the plate with an RBI. Giving Pendergraft more offensive help was Amelia Tietz, who went 2-for-3 with a homer while driving in three runs.

Hereford trailed 8-3 heading into the fourth before exploding for nine runs to go up 12-8. The Rangerettes battled back with a 4-run top of the sixth, tying it the game at 12-12. But in the bottom of the sixth the Lady Whitefaces took the lead for good when Xandria Liscano hustled home on a throwing error, followed by a key insurance run that plated Lexi Hernandez on another key Perryton error, giving Hereford the eventual game-winning runs.

Liscano finished with a double, a triple and an RBI. Teammate Neveah Coronado had a monster day hitting a pair of homers to drive in four RBIs.

Canyon and Pampa were postponed due to inclement weather in Pampa on Friday.

The game was halted in the fourth inning tied, 0-0, due to heavy rain.

The contest will be resumed at 4 p.m. Monday afternoon.

A Hopey Cortes two-run double was the difference for Dumas during a hard fought 8-7 home win against Borger on Friday night.

The Lady Bulldogs hung tough throughout the contest plating six runs in the top of the fourth to go up 6-3. The Demonettes chipped away at the lead, cutting the advantage to 6-5 after five innings. In the bottom of the sixth, Cortez came up clutch for Dumas with a go-ahead two-run double that put the Demonettes in front 7-6, and they’d never look back.

Cortez was stellar at the dish going 3-for-3 totaling five RBIs to lead Dumas.

The Bushland Lady Falcons finished off district in style thanks to a 14-0 blanking of Dalhart on the road Friday.

Joey Fowler continued her powerful ways homering for a fifth straight game giving her six long balls on the year. Fowler finished the day 2-for-3 with two RBIs. Jaycee Adams smashed two homers of her own and added four RBIs in the victory.

River Road closed out the regular season by clinching second place out District 1-3A thanks to run-ruling Canadian 16-4 on Thursday in Canadian.

Maribella Perez was lethal at the plate bombing two home runs in the victory for a total of five RBIs. Teammate Makanna Cooper added a 3-for-4 day with two runs driven in.