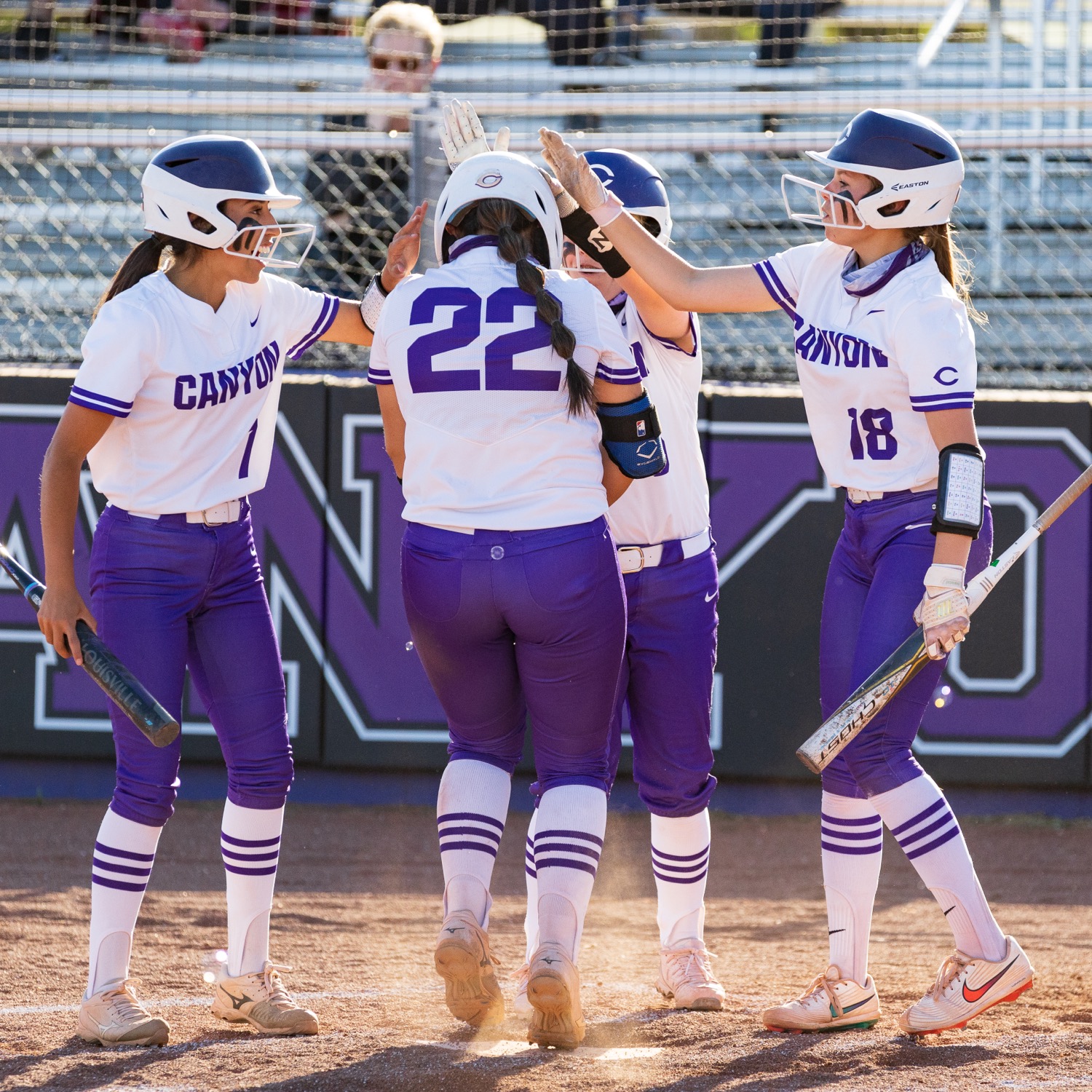 Canyon’s Isabelle Padilla is welcomed by teammates after hitting a homer during game one of a Class 4A bi-district game against Levelland on Thursday. Padilla hit four long balls in the two-game sweep. [Tom Carver/ Press Pass Sports]

Canyon had no issue racking up the runs against Levelland coming away with a two-game sweep of the Loboettes on Thursday and Friday.

The Lady Eagles dismantled Levelland with a 17-0 run-rule home win Thursday, and followed up the sweep thanks to a 19-3 drubbing on the road Friday.

Isabelle Padilla was unstoppable in the series for Canyon. The senior bombed four total homers in both victories, two in each game, going a comined 6-for-8 with nine RBIs. Danielle Burns was 3-for-4 with a homer in game one with four driven in, and Berkley Bradley had four hits in game two with four runs batted in.

Canyon improves to 18-8-2 and will face Monahans (19-9) in the area round at Lubbock-Cooper in a best-of-3 series. Game one is slotted for 5 p.m. Friday. Game two will be at noon, Saturday, and if necessary game three follows 30 minutes after.

Amarillo High’s season ends at the hands of Abilene Wylie

Amarillo High saw its season come to a stunning end on Friday and Saturday in the Class 5A bi-district round to No. 4-seed Abilene Wylie at Lubbock-Cooper.

The Lady Sandies mustered only one hit during a 10-0 run-rule loss in Friday’s game one, however, did show much more grit before Wylie came away with a walk-off 2-run homer to take a 6-5 victory, and the sweep Saturday afternoon.

The Lady Sandies had fought back from a 4-2 deficit in Saturday’s contest to take a 5-4 lead plating three runs in the top of the sixth.

After Wylie tied up the game, 5-5, the Lady Bulldogs sealed the sweep in the bottom of the seventh when Hannah Hood bunted, and AHS made a throwing error allowing delivered a walk-Kylie Barnes to score from third for the game-winning run.

AHS outfielder Lindsey Elizondo was 2-for-3 despite the loss with two RBIs.

AHS, which captured the program’s first ever District 3-5A championship in history this season, ends the year at 13-11. The Lady Bulldogs (19-12) move on to the area round to square off with El Paso El Dorado at a time and place to be determined.

Randall saw its season come to an end at the hands of Lubbock Coronado in the Class 5A bi-district round.

After a 13-1 run-rule loss at home in game one Thursday, the Lady Raiders showed much more fight in game two before falling in heartbreaking fashion at Coronado, 6-5, on Friday night.

Randall ends a solid year at 16-13-1 overall. The Lady Mustangs (22-8-1) move on to the area round where they’ll play El Paso Hanks at a time and place to be determined.

The Lady Raiders erased an early 3-0 deficit to tie Friday’s contest at 4-4 in the top of the fifth. Coronado had regained the advantage 5-4 in the home half of the fifth, but again Randall wouldn’t go away. In the top of the sixth Brooke Alvarado singled home the tying run knotting it back up, 5-5. However, the Lady Mustangs were able to advance in dramatic fashion in their final at-bat on a walk-off single by Paylen Thurman that scored Riley Flores to lift Coronado to a thrilling 6-5 victory.

Despite the Loss Randall’s Lauren Garcia went 2-for-3 Friday with an RBI.

The Abilene Cooper bats were too much for Caprock to overcome as the Lady Longhorns suffered a two-game sweep in the Class 5A bi-district round to the Lady Cougars on Friday and Saturday at Lubbock-Cooper.

Kaleigha Kemp led the Lady Cougars going 5-for-9 in the series with two homers and a combined nine RBIs.

Caprock’s Daisy Fuentes was 2-for-4 Saturday driving in two runs.

The Lady Longhorns end their season at 10-9. Cooper improves to 22-8, and will now take on El Paso Chapin in the area round.

Bushland opened the Class 3A playoffs in dominating fashion taking out Childress in a two-game sweep during the bi-district round in Canadian on Friday.

The Lady Falcons won the opener 15-1, then handily won the second game to clinch the series 19-1.

Bushland moves to 25-2-1 overall, and will now face Kermit at 7:30 p.m., next Friday at Lubbock-Cooper in a one-game area round contest. Childress ends its year at 20-8.

The Lady Falcons pounded out 27 hits in the pair of victories with 11 of those coming by way of the long ball.

Avery Sena went a combined 6-for-8 with six total runs driven in against the Lady Bobcats. Sena hit two homers in the first contest, and doubled in the second game.