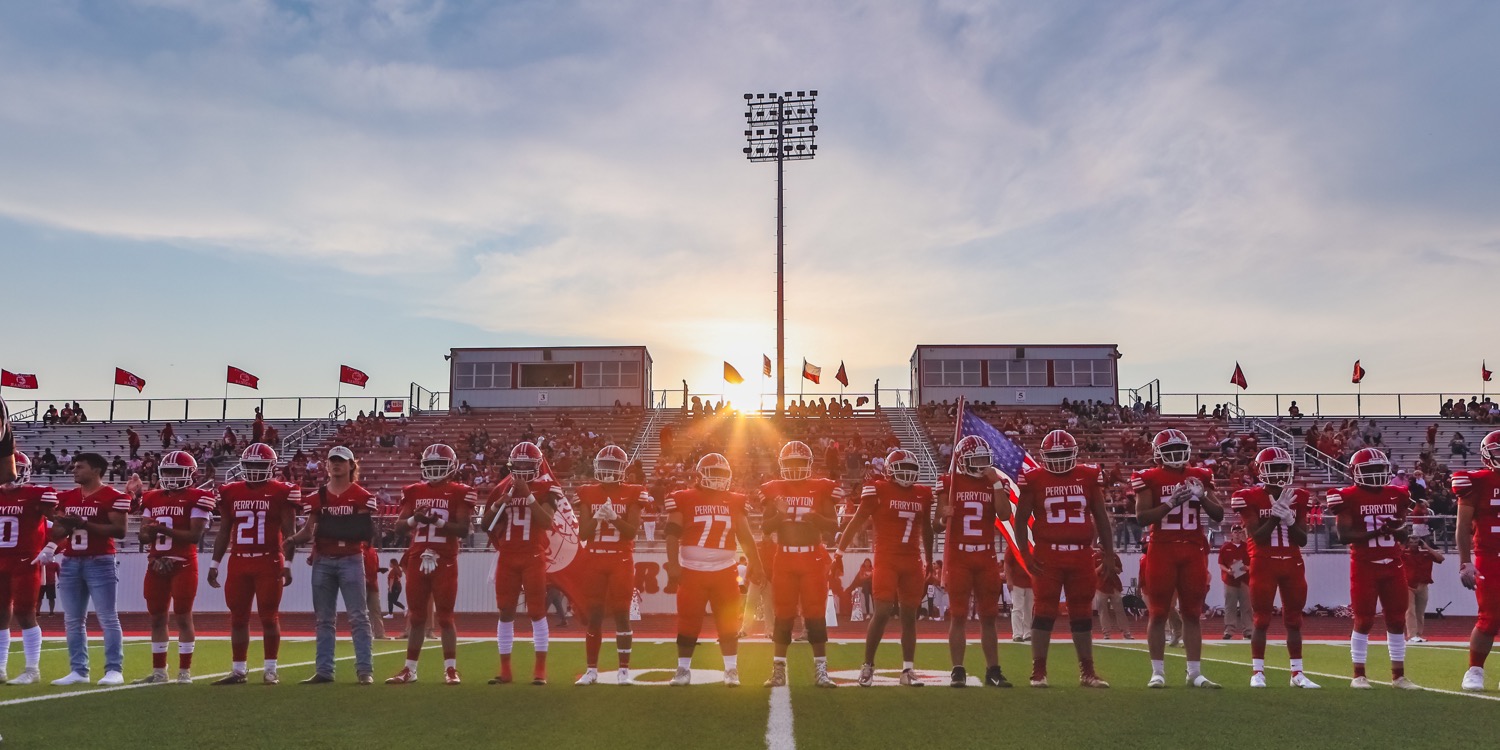 The Perryton Rangers line up before their game with Caprock last week as the sunsets over Rangers Stadium. [David Erickson/ Press Pass Sports]

That’s about to change, or my predicting is done.

The Dons own momentum and North Side Pride,

This one will be a fun Homecoming game ride.

Borger is feisty and will put up a fight,

A true measuring stick game for both undefeated teams this week. Is Follett the real deal? Can this Mustang defense be broken down? In the end, the Panthers are the Region I favorite for a reason. … Follett 68, Wildorado 54

The Tigers need a bounce back game and need it bad. The Mustangs won’t give it to them easily, but Groom prevails. … Groom 73, Claude 56

Tascosa is on a “Major” roll,

Last week Mauling Mojo, it was a stroll.

The Cats coming off a hefty loss, hey, hey.

This won’t be close I declare,

These Rebs send another OC &DC into prayer. …Tascosa 41, Central 17

The loser walks away with no shame.

Turnovers and big plays wil decide this one,

These two were mostly longtime district rivals before Canyon dropped down a classification three years ago. Both are coming off close wins, as Caprock rallied to beat Perryton as the Longhorns may have discovered a quarterback in Bowen Davis, and Canyon beat Lubbock Estacado on the road thanks to Elijah Smotherman’s late field goal. Homefield, among other things, gives Canyon the edge here. … Canyon 28, Caprock 17

Two more former district rivals now in different classifications also meet coming off opposite results last week. Randall suffered its first loss in a close game with Amarillo High, and Pampa blew out Borger in one of the area’s longest running rivalry games. This figures to be one of the better matchups of the week which shouldn’t be decided until late. Randall has a bit more depth. … Randall 34, Pampa 28

Dumas comes off an open week following a big win over Estacado, giving the Demons extra time to prepare for a road trip to Plainview, who got in the win column last week against Lubbock High. The timing works to the advantage of Dumas, who might start slow against the Bulldogs will have enough in the second half to win decisively. … Dumas 35, Plainview 13

Both teams are coming off losses last week as Estacado lost another tough one to Canyon and Hereford lost for the first time in a 30-7 rout by Wichita Falls Hirschi. The Herd has struggled offensively and will likely have to keep up with a speedy Estacado offense to have a chance. This time, the numbers won’t add up. … Estacado 21, Hereford 13

The Falcons found their footing offensively with a 42-point explosion in the second half that led to an upset win at Canadian. Now it’s another test against one of the Texas Panhandle’s best in the Elks. Stratford needs to control the ball to justify the depth Bushland brings. … Bushland 35, Stratford 23

Here’s a dandy on the South Plains. The always talented Mustangs hosting a hungry Bobcat team fresh off a bye week. Let’s see what Childress is made of. … Childress 34, Shallowater 22

These two teams have started off in the opposite direction. The Golden Wolves need to find some offense, and figure out how to slow down a Chieftains offense averaging 45 points a game. … Friona 35, Dalhart 13

The Bobcats have been the feel good story of 2021. However, the Eagles and their triple option will be a much stiffer test than recent weeks. … Roosevelt 38, Dimmitt 20

Tulia QB Travon McCaslin has been blistering defenses throwing for close to 700 yards in his last two starts. But the Mules are no slouch. The Hornets need to make this a business trip and walk away with a W to start getting recognition. … Tulia 27, Muleshoe 21

This was a nightmare moment for the Wildcats last season. Lamesa stunned River Road in the closing seconds to snap a 13-game losing skid. Coach Bryan Welps and his team have had this one circled ever since. … River Road 28, Lamesa 18

Anyone that likes points may want to show up to Longhorns Stadium. The Lynx won’t have Brenen Thompson, but Braden Klafka, Fabian Hernandez and Cason Mackie are ready to go toe-to-toe with Vega’s Ryan Grawunder and Clay Gilter. … Vega 36, Spearman 29

The Kiowas are fresh off a bye week, but have to face a Bulldogs team that already has a win against Sunray under their belt. … Hooker 35, Booker 14

If the Mustangs can’t match the Lions physicality this could be a long night. … New Deal 45, Bovina 17

The Irish are playing some good football at the moment, and getting production from the run game. Shamrock moves to 4-0. … Shamrock 42, Boys Ranch 14

What a sharp performance from the Broncos last week during a win against Bovina. If Clarendon grounds and pounds it the same way, they come home with a win. … Clarendon 38, Hale Center 16

Steers sophomore Corey Stancell is a must watch player. The dude does it all, and will overpoer the Wolverines. … Farwell 45, Texico 13

Gruver coach Lee Brandon returns to Wellington where he spent 2013-2019 as the defensive coordinator. This is a massive test to see where his improved Greyhounds are at going up against a Skyrocket team much better than their record indicates. … Wellington 29, Gruver 21

The Eagles are still in search for their first win of 2021. The Cyclones don’t intend on letting that happen. … Memphis 26, Fritch 20

The Bobcats bounce back after a rough couple of weeks. Look for Sunray to be .500 by the end of Friday evening. … Sunray 28, WT High 12

The Pirates started their season going through a gauntlet to start the year. McLean continues the punishment. … McLean 52, Lefors 28.

At the end of the night someone gets their first win. Let’s bet on the Patriots. … San Jacinto 43, Miami 27

White Deer got things turned around last week with a win against Lefors, but it’s right back to the grind when Spur comes to town. The Bucks keep it close, but this one goes to the Bulldogs. … Spur 62, White Deer 56.

The Cowboys took their first loss of the season last week against Springlake-Earth, and now have to regroup against an angsty Kangaroo team. Kress will have some bounce, but the Cowboys should wrangle the victory. … Happy 74, Kress 44

The Swifts were the surprise team of the week after their home win over Groom last Friday night. Naz needs to repeat its performance to take out the Dragons. … Nazareth 58, Paducah 48.

The Stanaland standoff is back and both brothers have undefeated team coming into the matchup. John with the Patriots is the underdog to big brother, Josh. This should be a barnburner. … Valley 64, Jayton 60

Previous articleInside the Huddle: Week 4
Next articleBuffs want to clean up mistakes with looming LSC contest against Western New Mexico